Since Sir Alex Ferguson's retirement and, more pertinently, David Gill's departure from the club, Manchester United‘s transfer policy has started to resemble Real Madrid‘s Gálactico philosophy. But if the Red Devils remain intent on landing a superstar this summer after missing out on Antoine Griezmann, Borussia Dortmund's Ousmane Dembélé could represent the perfect blend of the club's old and new transfer ideologies.

United have always been prepared to spend big for the right player, breaking the British transfer record in the past to sign Bryan Robson, Roy Keane and Juan Sebastián Verón among others. But their remit was usually to identify players on the cusp of superstardom, as they did with Cristiano Ronaldo, Ruud van Nistelrooy and David de Gea.

The general direction now seems to be to look for players who not only dramatically improve José Mourinho's options, but also boost the club's commercial prospects.

However, rather than chasing Bale, Neymar or Griezmann, players who, to varying degrees, are already at or closely approaching their peak and will command huge transfer fees and wages, those same resources would be better spent ploughed into a move for Dembélé.

In securing the 20-year-old France international, United would have a player more than capable of drastically improving the team's attacking prospects and selling no shortage of replica jerseys, but also one who is at the vanguard of the next generation of elite superstars, along with countryman Kylian Mbappé.

A Barcelona transfer target, Dortmund have slapped a £79million price tag on the gifted youngster, according to Catalan newspaper Mundo Deportivo. That figure is sightly lower than what United were willing to pay for Griezmann this summer, lower than the world record £89million they forked out for Pogba last year, and well within the means of the world's most valuable club.

Dortmund fought off interest from Liverpool and Paris Saint-Germain, among others, to sign Dembélé from Rennes for just £12.75million last summer.

The Vernon-born prodigy only made his professional debut in November of the 2016/16 season, but went on to establish himself as one of the rising stars of European football with 12 goals and five assists in 26 Ligue 1 appearances.

Since arriving at Signal Iduna Park, the seven-cap Les Blues star has been a revelation, taking German football by storm last season with an incredible return of 10 goals and 21 assists in all competitions, helping BVB overcome the loss of Henrikh Mkhitaryan.

Capable of playing on either wing or centrally as a No.10, one of the keys to Dembélé unique and devastating attacking capabilities is that he is genuinely two-footed. While still in France he was once asked which foot he is most comfortable using. The player insisted that his left foot is better but that he takes penalties with his right because he shoots better from that side.

This unique ability means that Dembélé is an unpredictable prospect for opposition defenders. When dribbling, the Frenchman shows none of the usual tells that would ordinarily betray which way an attacker intends to move.

Couple that with his electrifying pace and it's no surprise that his average of 4.5 dribbles per 90 minutes far exceeded the take-on regularity of any Bundesliga player with more than 500 minutes of action to their name last season. Considering he plays in the same league as such gifted dribblers as Arjen Robben, Franck Ribéry and Douglas Costa, this achievement is all the more remarkable.

He's far more than just a crowd-pleasing show pony, though. Almost invariably, every mazy dribble culminates in an incisive pass to pick out the run of a team-mate or a shot at goal. No Dortmund player could match his average of 2.8 key passes per 90 last term. United's most consistent creator was Juan Mata, but even the experienced Spaniard, with 2.5 key passes per 90, didn't come close to the Bundesliga star.

How Dembélé Could Transform United

Mourinho's men didn't do too badly creativity-wise last season, conjuring the fourth highest number of scoring opportunities in the Premier League (447). Their issue was more with finishing them off, ranking eighth for goals scored (54).

But with a more dynamic attacking threat such as Dembélé in their ranks, someone who is capable double figures for goals and assists in a single season — a feat no United player managed in 2016/17 — the Red Devils, even under the tutelage of their uber-cautious Portuguese coach, could be come a thrilling attacking unit.

The 20-year-old is blessed with searing pace, an attribute that is so prized in the modern game, and something that United do not have in abundance at the moment.

Marcus Rashford and Anthony Martial both offer raw speed, but the rest of the 20-time champions' attacking roster is made up of players who take a more considered approach — this was especially true when Ibrahimović was leading the line.

But throw a more mobile centre-forward into the mix — such as United's latest signing Romelu Lukaku  — with Dembélé stationed either directly behind or out wide, and, all of a sudden, the Red Devils go from pedestrian hesitaters in the final third to having the option of counter-attacking at breakneck speed to catch opponents on the hop. 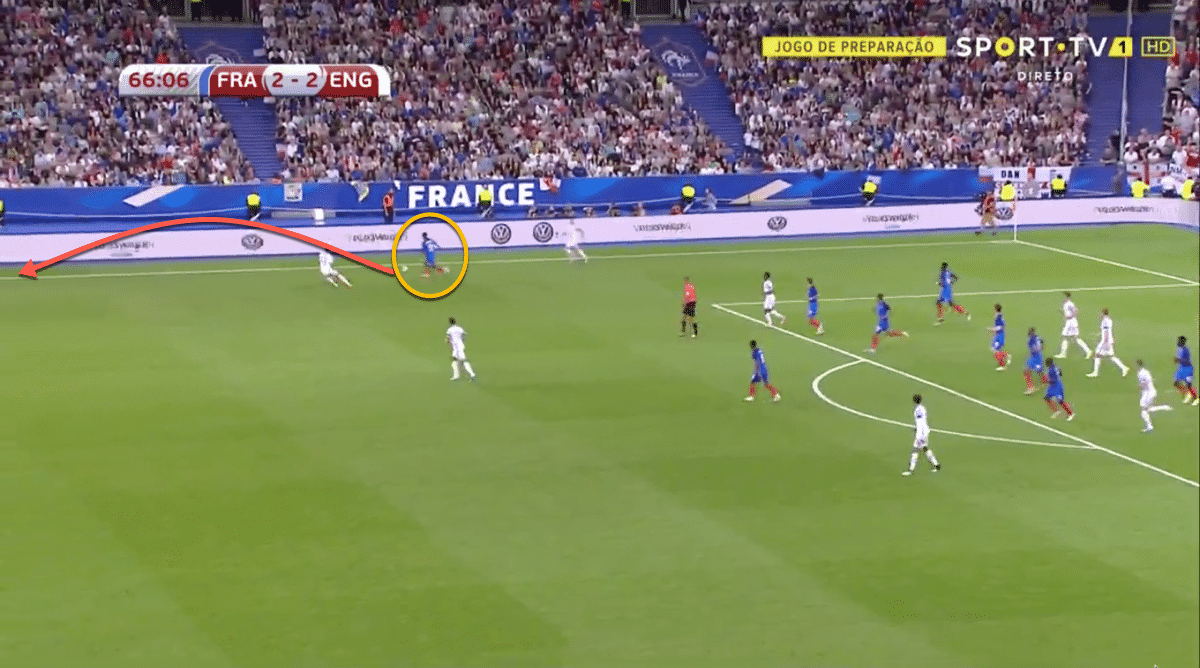 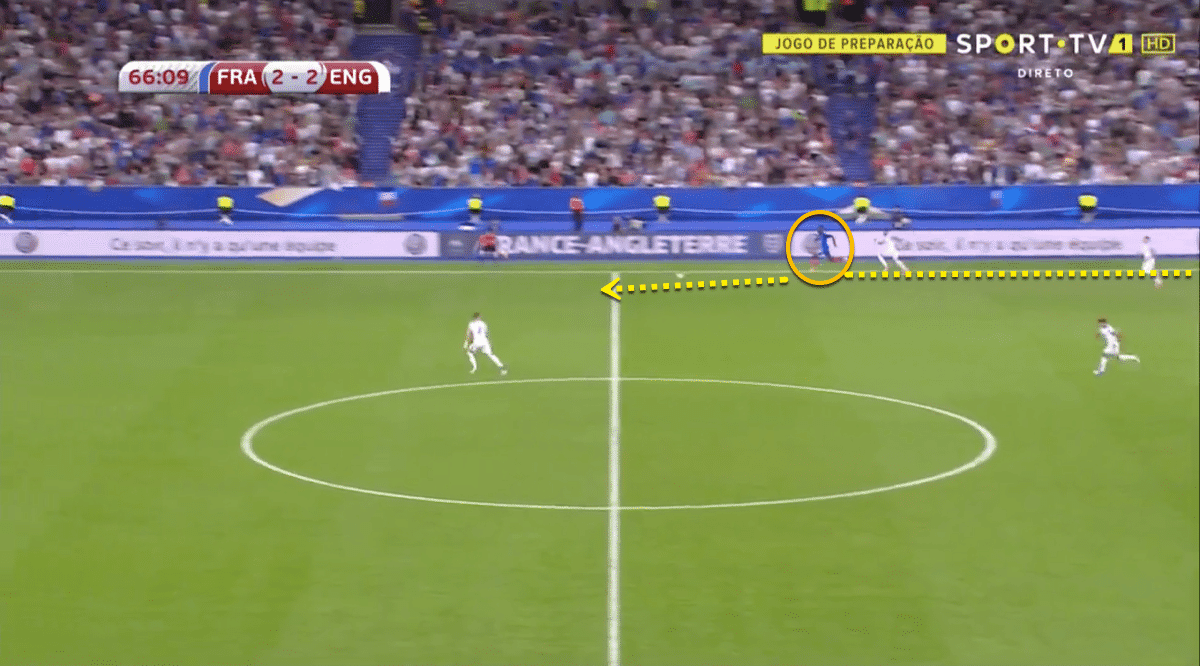 In the above images, taken from France's recent 3-2 friendly victory over England, in which Dembélé bagged his first senior international goal, we see the BVB man's blistering pace in full effect.

Collecting the ball after his side clear an England corner, Demblélé is faced with Manchester City‘s Kyle Walker. The Frenchmen knocks the ball into the open space behind the Three Lions' full-back and initiates a one-versus-one sprint.

Walker is one of the fastest players in the Premier League, but Dembélé leaves him for dead, breaking into the opposition's half, turning defence into attack in a matter of seconds. 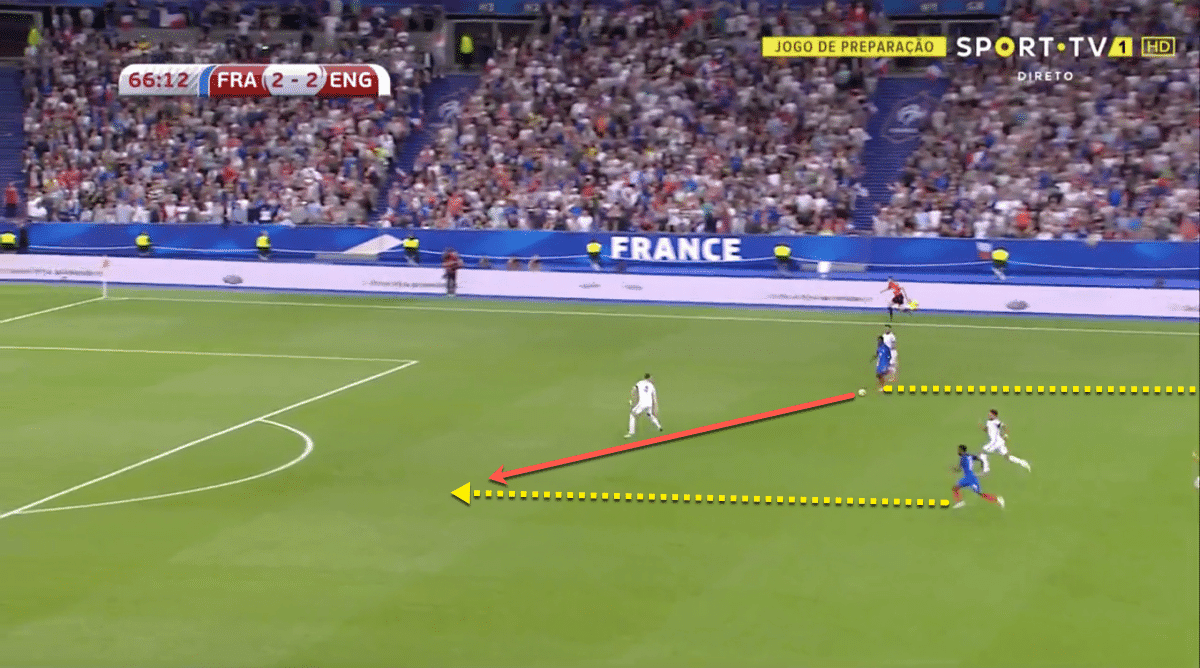 Storming into the final third, he spots the run of a colleague and looks to play him in for a scoring chance, but the 20-year-old winger's accuracy lets him down on this occasion; a let-off for England but just one example of how much of a game changer Dembélé's pace, control and awareness can be.

The other key attribute of Dembélé's that would help return United to being one of the most feared attacking forces in the country is, as already mentioned, his unpredictability. 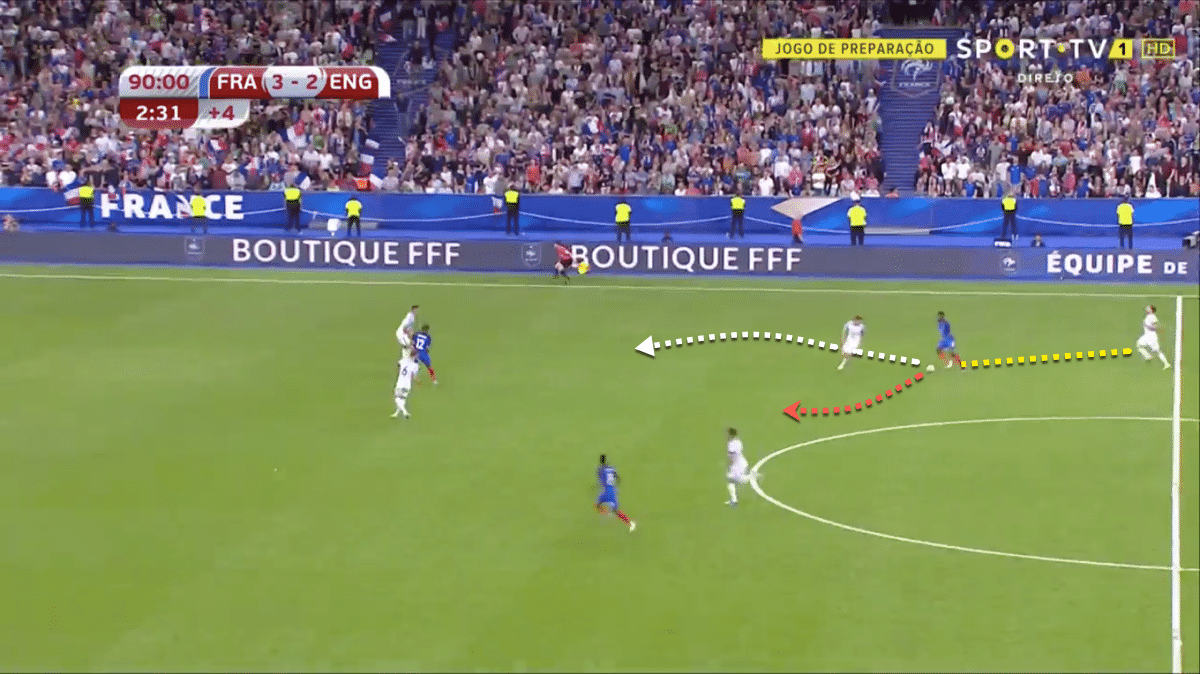 Here, in the same game, Dembélé carries the ball into England's half and is closed down by Eric Dier, a reported Manchester United transfer target. Everything about the France forward's body shape suggests he is going to move infield, following the path marked out by the red arrow.

Instead, goes on the outside of the Spurs defensive midfielder, changing direction to follow the red arrow, with his agility and close control meaning he never breaks stride. 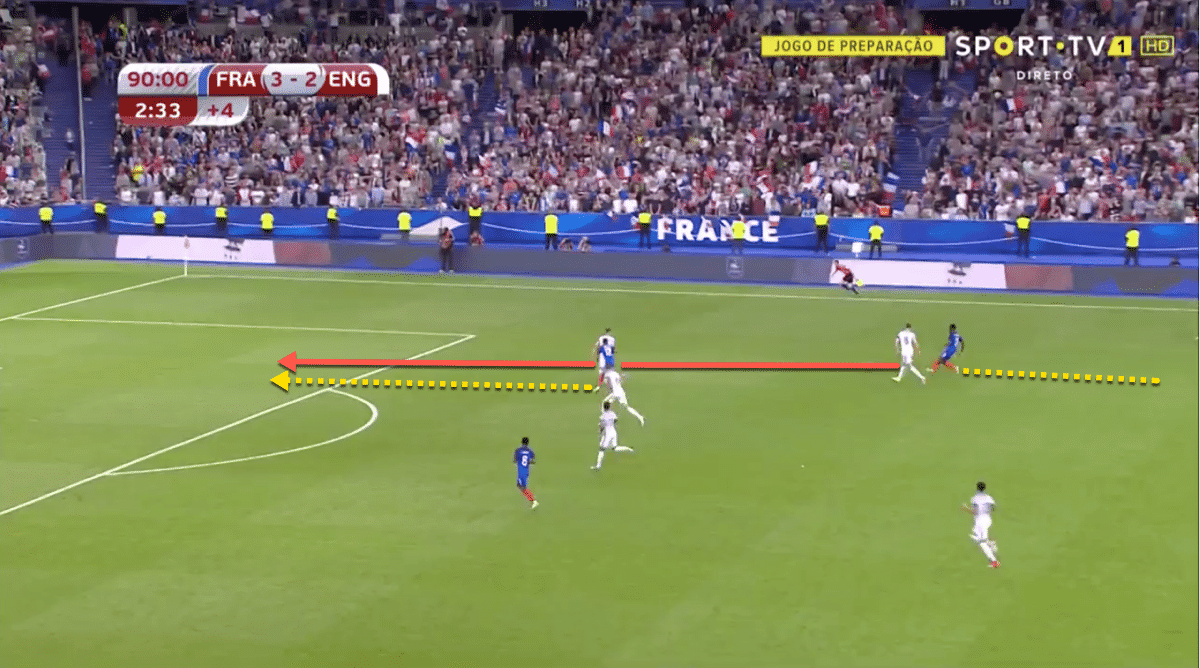 Advancing his run toward the danger zone, Dembélé spots the run of Mbappé and picks the teenage Monaco superstar out with a superb, perfectly-measured through-ball to create a scoring chance. Further evidence of what the Dortmund youngster could offer the Old Trafford outfit if matched up with a mobile centre-forward.

Although he may not have the name recognition of a Neymar or Bale just yet, his reputation is growing. Dembélé's trajectory is steep and knows no obvious limits, pointing up to the stratosphere and showing no signs of arcing back down to Earth any time soon.

A versatile and effective player for the here and now; a global superstar of the future — there's no better match for Manchester United‘s ambitions, both on and off the field, than Dembélé.