For the first time this season, Manchester United managed to marry consecutive halves of good performance when Everton visited Old Trafford on Sunday evening. The outcome: a routine, drama-free 2-1 victory; the kind of which José Mourinho will be hoping to see more often if the prediction he made in his pre-match programme notes is to come true – “I believe that at the end of December we will be in a completely different position in the table.”

The United manager successfully manifested a more fluid attacking display from his side by dropping the misfiring Romelu Lukaku from the starring line-up.

Marcus Rashford took the Belgian's position at the point of attack, but it was another striker-cum-wide man who shone. Anthony Martial, who reportedly rejected United's offer of a new contract this week, dazzled from the left flank, winning a first-half penalty, which Paul Pogba converted via a rebound, and rattling in a stunning strike from 18 yards to seal victory early in the second period.

Although Everton were not without scoring chances of their own, the away side's wayward finishing meant David de Gea was rarely stretched beyond Gylfi Sigurðsson's confident 77th-minute penalty, and the Red Devils recorded possibly their most straightforward three points of the season so far.

Here are the five things we learned. 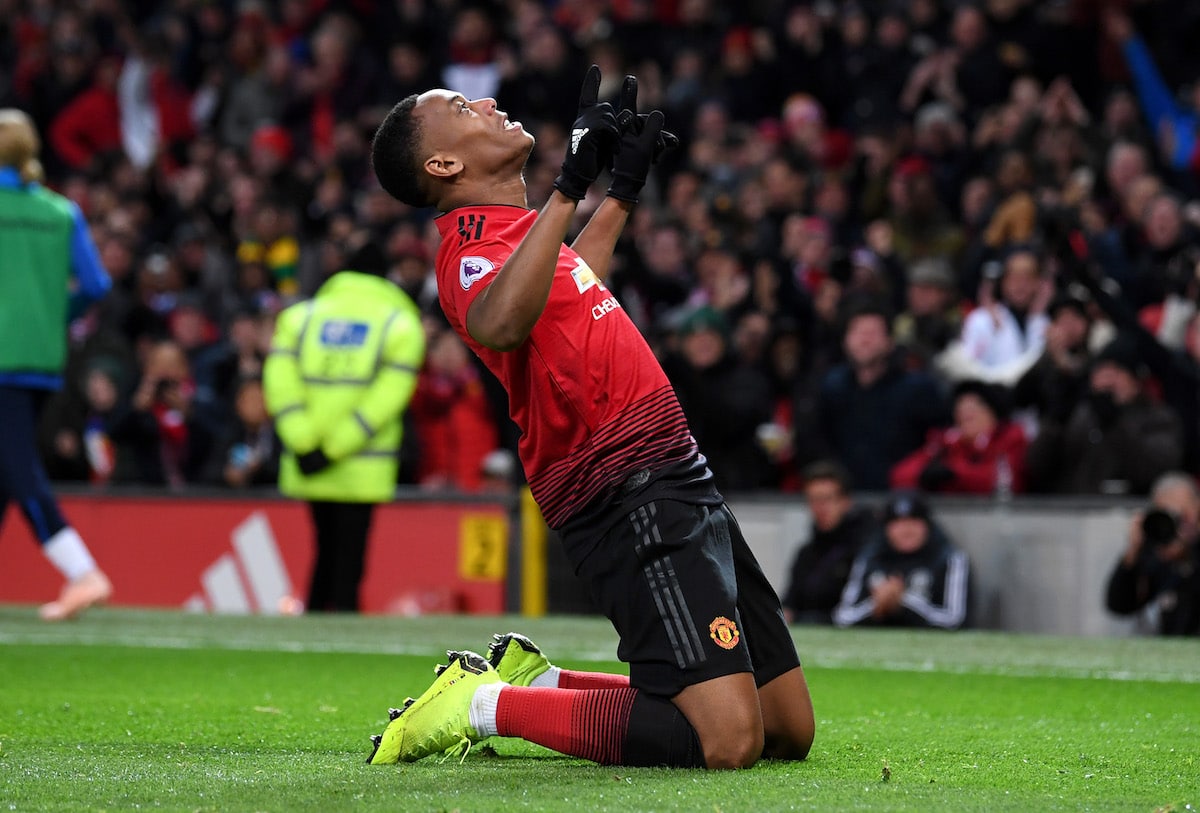 He divides option within Old Trafford, but there should be little doubt about the fact that, when on form, Martial is United's best attacking player, and by some distance.

The Frenchman displayed the full gamut of his vast abilities against Everton, an opponent he always seems to relish facing. There were slick interchanges with Pogba, leg-twisting dribbles and the kind of precise finishing none of his colleagues appear to possess.

His goal was one to savour. Receiving the ball from Pogba, on the left-hand side on the penalty area, Martial struck a first-time effort which was destined for the far bottom corner from the instant it left his boot, curling outside the post before arcing back in to give Jordan Pickford no chance of making a save.

For too long, the gifted 22-year-old was made to sit out in favour of Alexis Sánchez. His recent form – he now has four goals in four games – shows that Martial is the kind of player you build teams around, not someone to be sacrificed to make way for expensive new arrivals.

The best and worst of Pogba

For more than 70 minutes, this was shaping up to be one of Pogba's finest displays of the season, and among his better since re-signing from Juventus in 2016.

The flamboyant playmaker was at his swaggering, effortless best, connecting defence to attack and executing the kind of elaborate passes few of his peers even see.

He erred from the penalty spot, seeing Pickford save his tame effort after his trademark, tippy-toed run-up, but he was instantly forgiven as he slotted home the rebound.

Then, though, on 76 minutes and with the home side cruising to an easy three points, he dwelled on the ball in midfield before his attempted out-side-of-the-boot, flicked pass was intercepted. Everton broke and won a penalty when Richarlison was scythed down by Chris Smalling.

The defender was silly to dive in when geometry was working against the Toffees' Brazilian attacker, but it was a situation needlessly created by Pogba's over-elaboration in the middle of the park.

Everton had their chances

Marco Silva's men shot for goal 12 times at Old Trafford, just once fewer than their hosts, and hit the target six times in total.

While United were eminently comfortable throughout, they were too often careless and disorganised at the back, meaning Everton didn't require an great level of invention of cunning to muster chances. Indeed, Brazilian winger Bernard was allowed to saunter through United's backline and round De Gea only to inexplicably shoot wide – a major let-off for the home side.

There is plenty that will please Mourinho about his side's performance here, but concern remains over their propensity to shoot themselves in the foot.

Had Everton been able to call upon the services of a genuinely top-quality centre-forward, they might well have come away with something.

Silva elected to start with Richarlison, a wide forward by trade, in the striker's position in Everton's 4-2-3-1 shape, flanked by Theo Walcott and Bernard and supported from behind by Sigurðsson. Cenk Tosun, the Turkish striker expensively acquired last January, is yet to convince and was left out.

Although Richarlison offers no shortage of endeavour and pace in behind, he lacks the penalty-box savvy to regularly sniff out pockets of space and none of the Everton attackers proved dependable enough in front of goal.

Without a club goal since mid-September – a run now stretching eight games after his late cameo here – Lukaku was omitted from the United line-up for the visit of his former team.

Mourinho framed the omission of his £75million striker as merely an effort to rest the rarely left-out striker, but there have been calls from fans and media for United to seek an alternative to Lukaku for some weeks now.

Rashford started centrally and once again failed to make the most the chance to start in what many consider to be his natural role. But, whether a consequence of Lukaku being benched or not, United looked more fluid than they have in recent weeks, when the Belgian has cut a lumbering figure.