In what was shaping up to be a very frustrating evening for José Mourinho's men, goals from substitutes Marcus Rashford and Marouane Fellaini were enough to give Manchester United a third victory in a row, seeing off Leicester City at Old Trafford.

The home crowd had to wait until the 70th minute for the game's opening goal, as Rashford was left unmarked at a corner and casually side-footed beyond Kasper Schmeichel, in what was one of few defensive lapses in the Foxes' otherwise resolute display. Fellaini then sealed the win from what looked to be an offside position.

The result means United remain top of the Premier League table at this early stage, with nine points from a possible nine, while Leicester have three points for their efforts so far this term.

Craig Shakespeare sent out his side with the intention of frustrating United by denying them space in the central zones. To do this, whenever the home side entered the Foxes' third of the pitch, the Leicester back four pulled very narrow and held their line a yard or two inside their own penalty area.

Knowing that all United's attackers prefer to do their work inside, Leicester were happy to cede the wings to their opponents, backing themselves – just as they did in their 2015/16 title-winning campaign – to deal with any crosses into the box thanks to their aerial advantage. 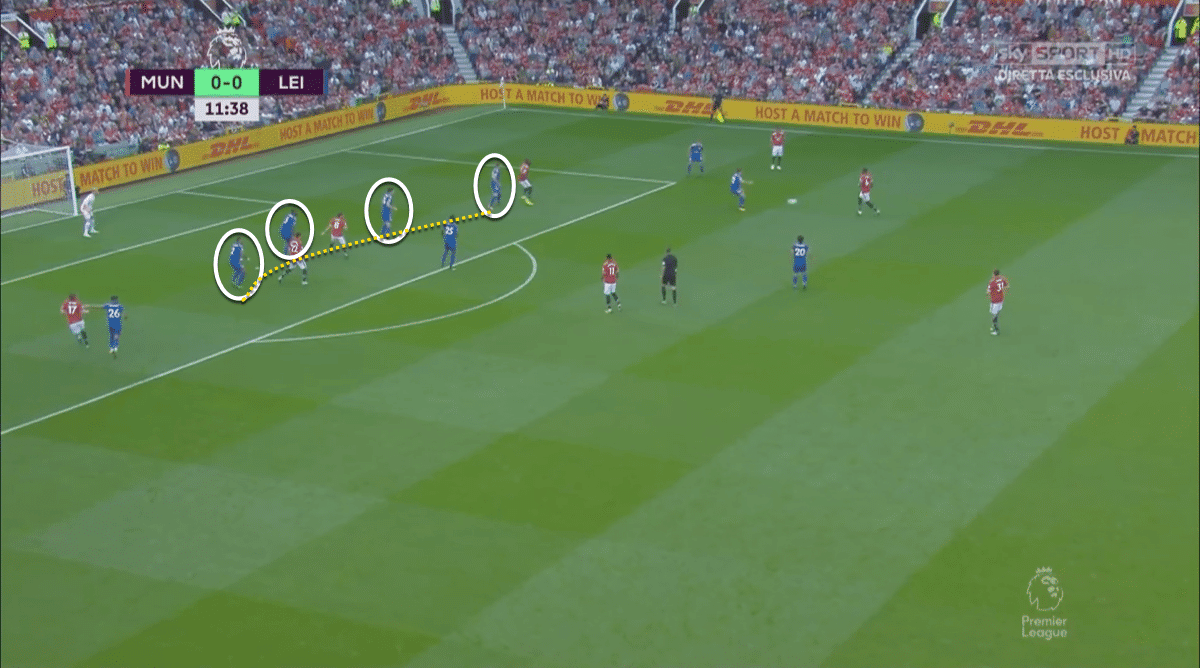 Above, we see each member of the Leicester back four circled. They are all packed tightly together and holding their line closer to the penalty spot than the edge of the 18-yard box.

Dropping so deep meant there was little space for the likes of Romelu Lukaku, Anthony Martial and Juan Mata to break into, while their compactness formed a cluster of bodies in the key central zone, making it very hard for United to penetrate.

With Leicester defending so narrowly, starting with both Henrikh Mkhitaryan and Mata, who both favour receiving the ball to feet in the central attacking zone, was counterproductive.

Mata started on the right flank but looked to come inside at every opportunity, which would have been less of an issue were Mkhitaryan more willing to switch positions on occasion and pull wide to stretch play, or had right-back Antonio Valencia been more adventurous in his forward forays.

But that wasn't the case and meant that United, for long periods, played straight into Leicester‘s roadblock, restricting the home side to shots from range that were easily dealt with. 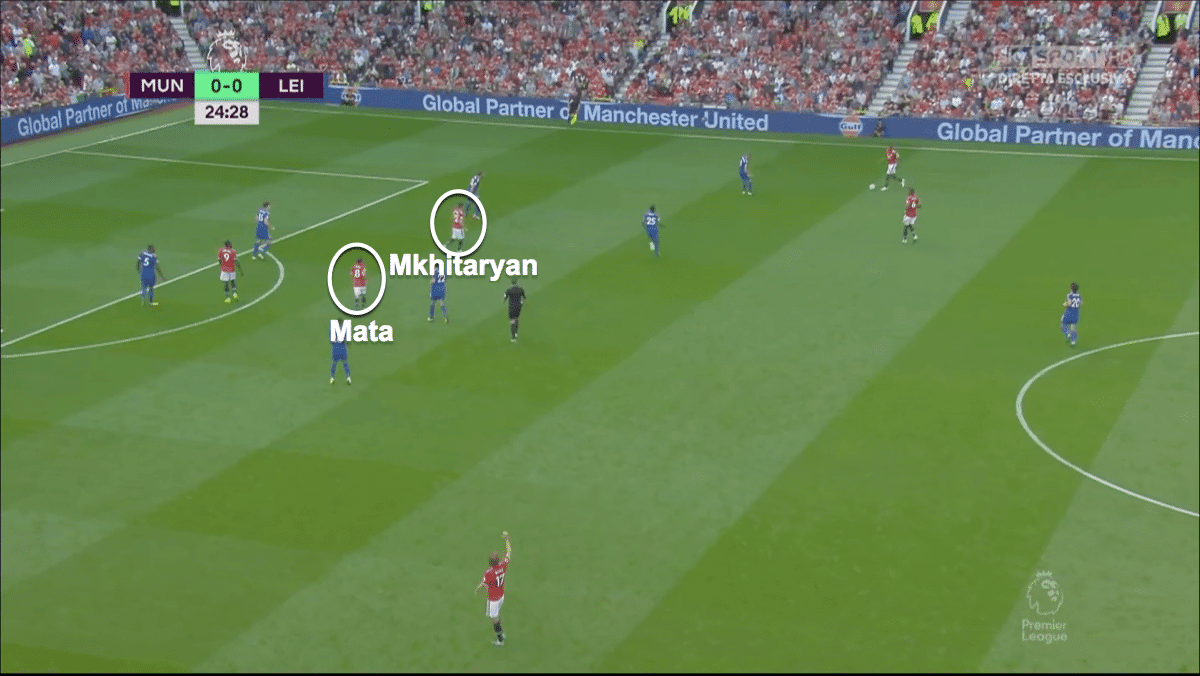 The above image shows Mata and Mkhitaryan in close proximity in a central zone as United attack. This was typical of how the pair positioned themselves throughout the game.

On the left, Martial did a good job of varying his approach. His instinct, too, is to drift inside, but on the occasions he pulled wide and ran at his opposing full-back, Danny Simpson, the Frenchman looked dangerous, completing three take-ons and creating four chances.

Had, say, Rashford been doing the same on the opposite flank for longer than his second-half cameo appearance, there's a chance United might have drawn the stubborn Leicester defence out of shape and broken the deadlock sooner.

The Foxes came to Old Trafford operating with the same blueprint that delivered them the most unlikely Premier League title triumph back in 2015/16.

The aforementioned plan to defend deep and allow space down the flanks was a common theme two seasons ago, as was the notion of defending with three defined lines in a 4-4-2 shape and utilising a low block.

On the rare occasions they managed to get on the ball, Leicester looked to play quickly and directly to Jamie Vardy, hitting the spaces in behind United's defensive line and backing the England striker's pace and tenacity. This time, however, the former non-league forward was expertly marshalled by Eric Bailly and Phil Jones.

The one major difference in Leicester's approach against United to that which made them champions two years ago was that they were much more restrained on the wings. Marc Albrighton and Riyad Mahrez held a deeper starting position and were less willing to break forward on the counter for fear of the Red Devils' hurting them in the spaces they would vacate.

The introduction of Demarai Gray, and Mahrez finding joy in behind Daley Blind as the Dutchman pushed forward in the second half, saw Leicester's wide men rediscover their sense of adventure and almost proved fruitful for the visitors.

United Need A Winger Or A More Dynamic Full-back

Until United took the lead with 20 minutes to play, profiting from some lax marking at a corner, their lack off width was starkly apparent.

Mourinho has been in the market for a new winger all summer, Inter Milan's Ivan Perišić and Thomas Lemar of Monaco have both been mooted as Manchester United transfer targets.

With less than a week of the transfer window remaining, the Portuguese coach might be minded to press hard for his desired fourth addition.

Another option to solve United's struggles out wide would be to find a more dynamic full-back. Valencia has impressed over the last year or so at right-back but his delivery is often predictable, while Blind, on the left, is capable of fantastic crosses but is bereft of pace and athleticism.

If Luke Shaw is able to return to form and fitness he will go a long way towards filling that void, but that is no guarantee at this stage, while the Red Devils are being linked to moves for Tottenham Hotspur's Danny Rose and Fulham teenager Ryan Sessegnon.

United's chequebook may well have been filed back in the desk drawer for this summer, but, although a title challenge appears on the cards either way, one more savvy wide signing could be pivotal.

FOLLOW TRANSFER LIVE! FOR ALL THE LATEST TRANSFER NEWS AS IT HAPPENS