On Wednesday, Arsenal were dealt a blow to their summer revamp plans when a £30.74million bid for Monaco’s Thomas Lemar was rejected by the Ligue 1 champions.

However, according to Thursday’s edition of French newspaper, L’Equipe, the France international is also a Manchester United transfer target. They report that Juventus and the Old Trafford club have made a request for information to the Monegasque side.

Tottenham Hotspur are known to be preparing a bid for the 21-year-old and Barcelona, Manchester City and Chelsea have demanded a meeting with the player’s agent.

Arsenal’s bid, when reported in France, is supposedly around the €40m mark, not including bonuses, yet, the Ligue 1 side remain unmoved and are trying to do everything in their power to keep the former Caen man at the Stade Louis II for next season.

Outside of Manchester City new boy, Bernardo Silva, Lemar was one of the best performers under Leonardo Jardim, as Monaco impressed everyone on the way to the title.

In the Portuguese boss' 4-4-2 formation, Lemar played on the left wing, coming inside to play as an inverted No.10 and then use the runs of left-back Benjamin Mendy to create space and deliver dangerous crosses with his excellent left-foot.

When Manchester United were heavily linked with a move for Bernardo, it was constantly quoted that he fell exactly in the mould of a player that Mourinho would love due to his ability to track back and protect the full-back.

Last season, Lemar made more successful tackles per 90 minutes (1.7), and more interceptions (1) than his Portuguese team-mate. 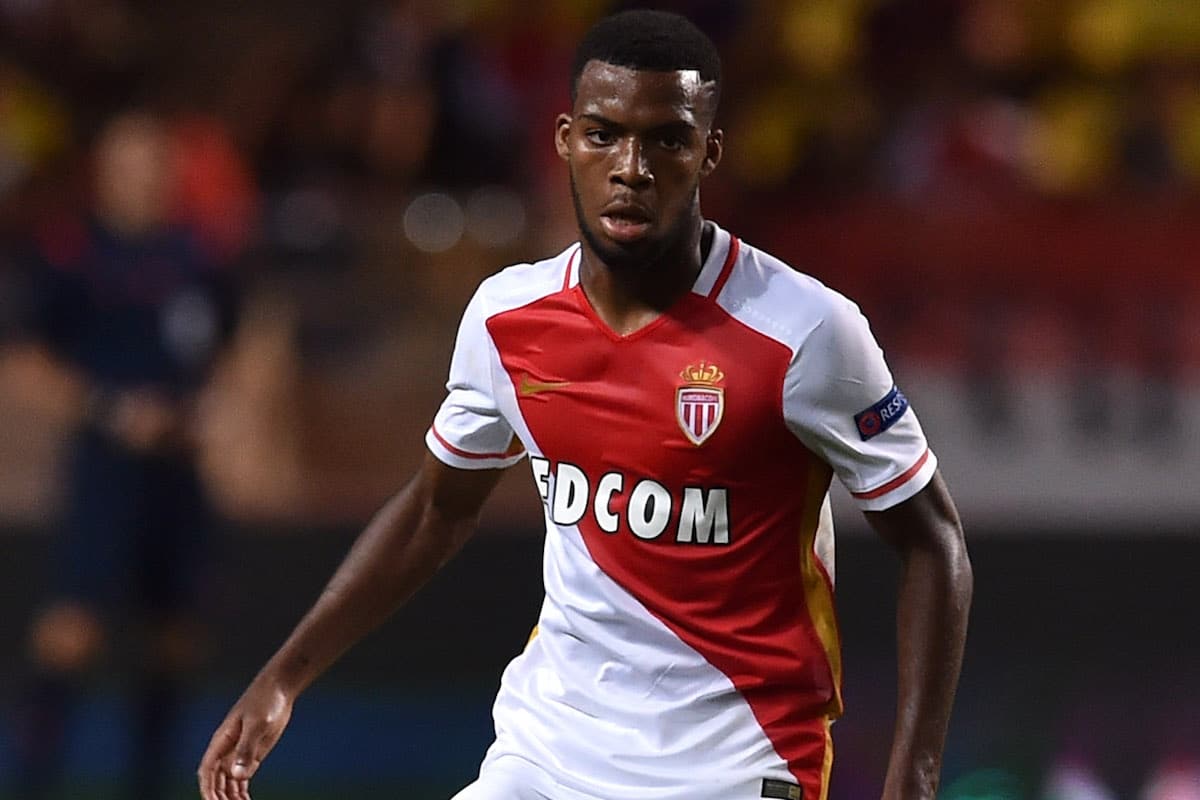 In Monaco’s 4-4-2, it was something that was required from both wide attackers as the left and right-back were more comfortable pushing forward than protecting the defence.

Not a traditional winger, Lemar doesn’t have the pace to beat players to the by-line, but he doesn’t need to. What he lacks in leg speed, he makes up for in his mental quickness. Reading the situation, he finds a way to create a half-yard, delivering crosses with stunning accuracy.

He’s a centre-forward’s dream and Radamel Falcao and Real Madrid transfer target, Kylian Mbappé, would sorely miss his talents were he to move.

The Frenchman can drill cross-field balls, slip passes in-behind, fire deliveries in low and then tease goalkeepers and defenders with curling crosses from anywhere in the final third.

Playing against Spurs in the UEFA Champions League group stage, he even showed he can ghost in at the back post to finish moves as well as create them.

Finishing the season with 14 goals and 17 assists in all competitions, it shows that the 21-year-old is just as dangerous in his creative side as his scoring ability.

Where would he fit at Man United? 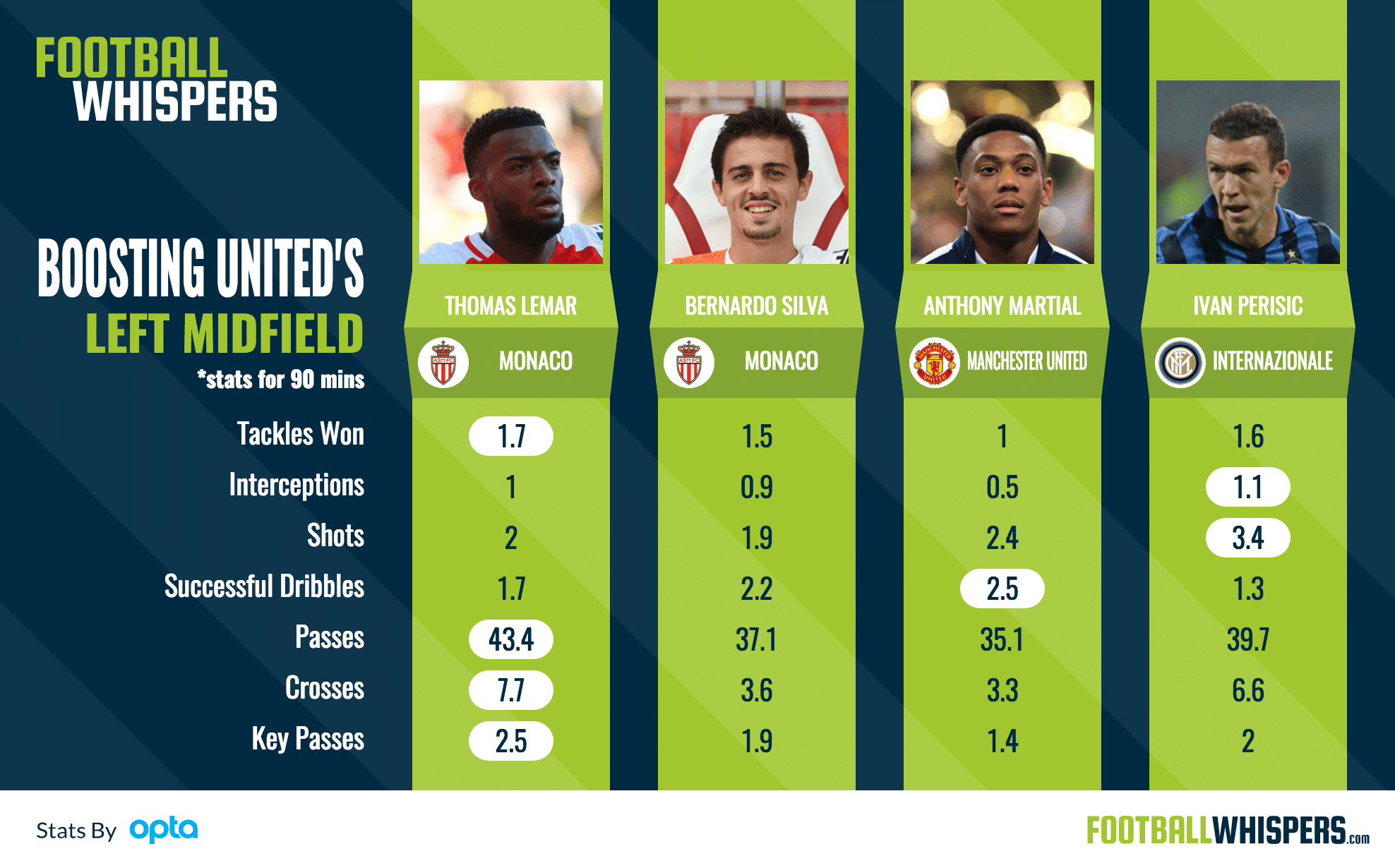 If United were to fend off competition from the other clubs and land the Monaco star, he would likely take up position on the left of midfield, either in the 4-2-3-1 or 4-3-3. Lemar offers a different option to what Anthony Martial or Marcus Rashford bring.

He’s not all about power and pace, but incisive movements to Zlatan Ibrahimović’s release, it’s the sort of service they would thrive off.

When United beat Chelsea at Old Trafford, it was the vision and passing of Ander Herrera that picked out Rashford and Lemar could offer something similar from further up the pitch.

What Lemar does best for Monaco

The €60million rated midfielder is best suited to a team that has a penalty box striker like Monaco have with Falcao. Without Ibrahimović, United will rely more on movement, but will still want a forward in and around the penalty spot to get on the end of crosses.

Looking to work the ball into the box, Monaco were not averse to whipping in low crosses. It’s not just a case of the midfielder throwing the ball into the area but he’s intelligent and able to pick his moment. 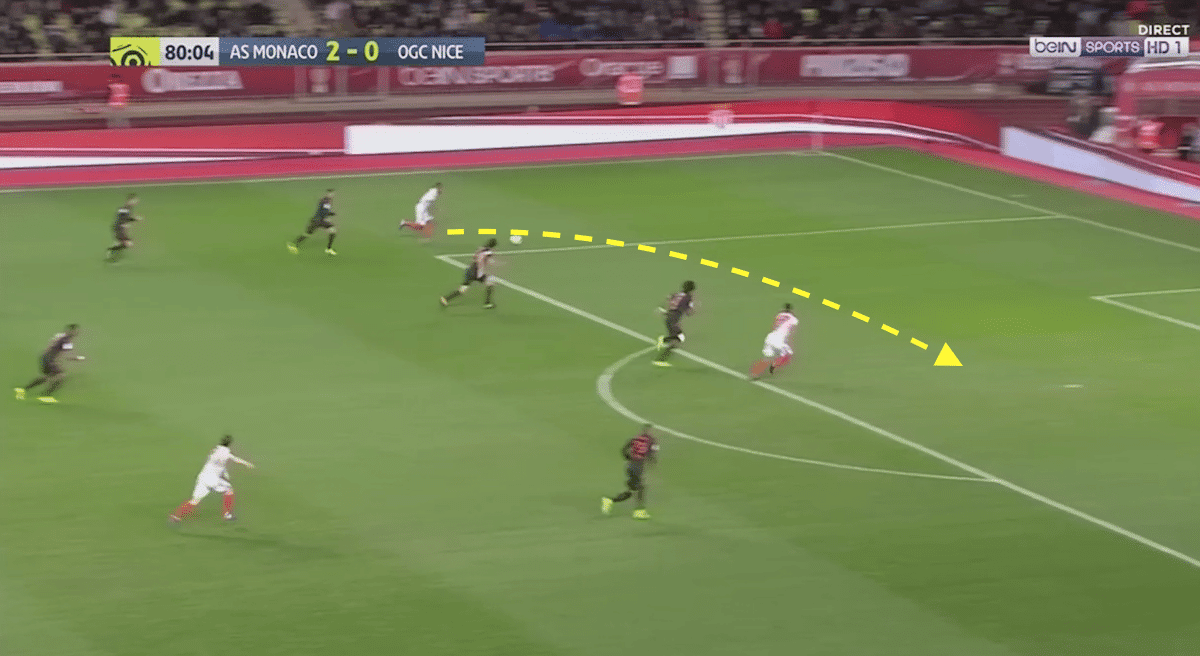 Against Nice in the recent derby game, it was this awareness that helped set up Falcao to secure a 3-0 victory. 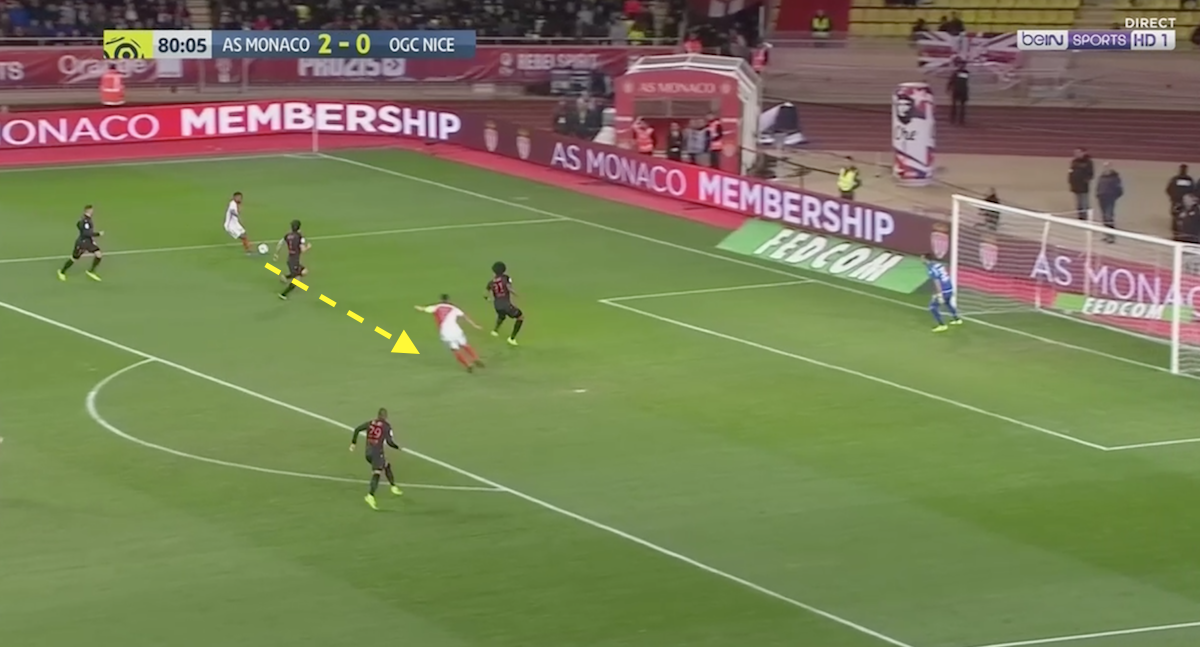 Most wide players would have thrown the ball to the penalty spot to the onrushing Colombian. 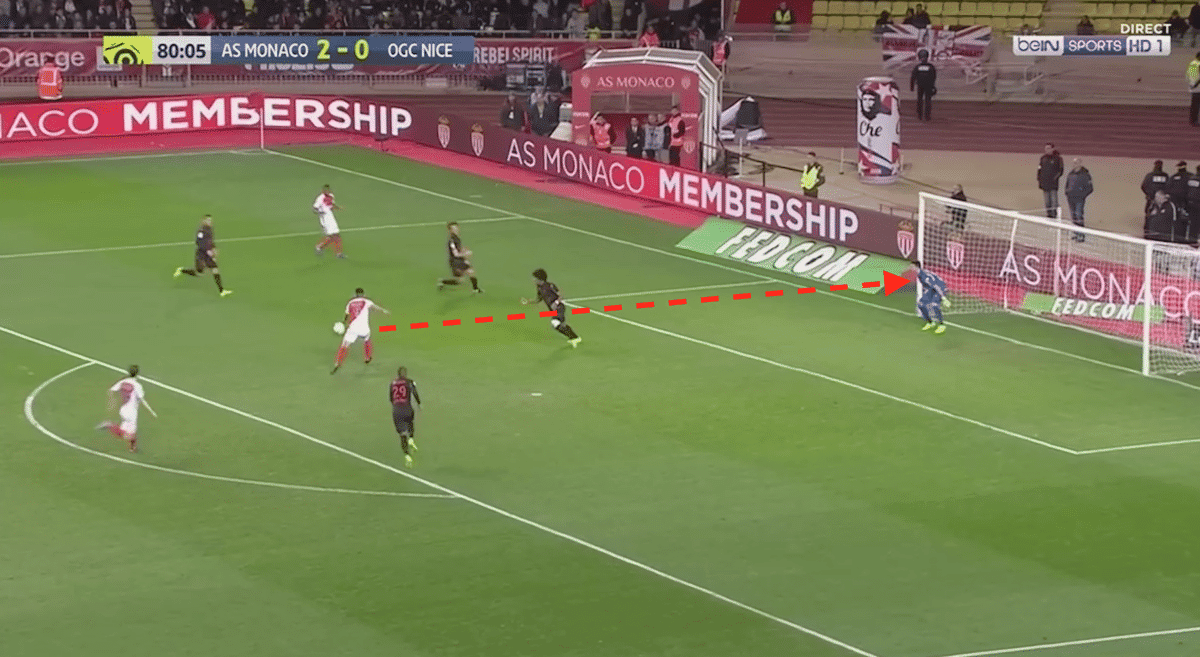 Lemar knows his team-mate, waits that split second later and can pick out the forward with a low pass and the striker finishes with ease. Both Rashford and Martial would benefit greatly from his quality.

According to Le Parisien, Monaco have promised Mbappé, currently negotiating a new deal with the Monegasque side, that after Tiemoué Bakayoko leaves for Chelsea, no other players will leave the club. Although, it’s unclear whether that includes Brazilian midfielder and fellow Manchester United transfer target, Fabinho.

Due to his age, obvious talent and contract until 2020, there is very little chance of Monaco budging for anything less than £45-50million.

“Today, Thomas is with the Ligue 1 leaders. There is no set plan for him,” his father Edwige, told Ouest France in April.

“We are of the belief that logically the plan is playing time, which is what he has at Monaco. Sometimes there are financial parameters that do not fit into that, but I think that the aim is to do another year or two with Monaco.”

Anthony Martial was set to stay in Ligue 1 for another season until United made an audacious bid for the then Monaco striker, the same could happen with Lemar, but with the champions sticking to a business plan and in a much stronger position financially, it would take something special.

Monaco not planning to sell Lemar

Monaco don’t just let players go without forward planning. Already this summer they have signed Soualiho Meïte and Youri Tielemans to play in the centre of midfield, covering the departures of Bakayoko and Fabinho. Allan Saint-Maximin comes back from him loan at Bastia, replacing Valère Germain who has moved to Marseille.

Jordi Mboula, a highly-rated youngster from Barcelona plays on the right of the midfield, Bernardo Silva’s position and Jordy Gaspar signed from Lyon, getting ready for Djibril Sidibé’s possible departure.

Monaco have not signed someone able to play in place of Lemar. Brazilian midfielder Gabriel Boschilia impressed in the early stages of last season, but knee ligament injury in February limited him to just 437 minutes in Ligue 1.

The 21-year-old is the most natural replacement, but Monaco would want to see how he recovers from such a long-term absence before placing their trust in him. It would be typical pragmatism from Vice-president Vadim Vasilyev, if the club signed someone else in January, ready for Lemar’s departure next summer.

Many were worried about Monaco’s ability to retain and fight against Paris Saint-Germain next season after so many of their talented team have been linked with transfers away. But as there is with everyone at the club, not only is no one indispensable, but they have a plan.

If United don’t land Ivan Perisic from Inter Milan this summer, Lemar makes perfect sense, but Mourinho faces a similar if not tougher battle to land his man. There may need to be a Plan C to improve the left of Manchester United’s attack.