Man City already have one foot in the next round of the Champions League after they destroyed Sporting CP 5-0 in their own backyard last month. We fully expect Guardiola to make a few changes from his strongest starting eleven but still see Man City winning the 2nd leg at the Etihad with relative ease.

Man City have won their last two encounters with Sporting CP and following that 5-0 victory in Portugal last month, we're backing the hosts to win-to-nil on Wednesday night. City have won five of their last six matches in all competitions, keeping four clean sheets in the process, while Sporting have only won two of their last six outings and really struggled against Man City last time out.

We're predicting goals in this game as each of the last two meetings between these two clubs have featured 5-goals. Over 3.5 goals have been scored in four of Man City's last six outings in league and cup, including a 4-1 win over their local rivals, Man Utd, at the weekend. Guardiola's men are in great goalscoring form right now and their defense looks solid, so Sporting could well be on the end of another hammering on Wednesday.

The Manchester Derby took place on Sunday and while United gave a good account of themselves in the first half, City ended up running out comfortable winners. De Bruyne put the home side in front after 5-minutes following good work down the left-hand side. However, former City youngster, Sancho, fired Man Utd back onto level terms in the 22nd-minute and refused to celebrate against his former employers. De Bruyne added a second goal before the break and in the second half, Mahrez scored twice to warp up a 4-1 victory.

Sporting CP returned to winning ways at the weekend when they played host to newly promoted Arouca. Algeria's Slimani scored both of the home sides' goals early in the second forty-five to keep Sporting sitting second in the Primeira Liga table behind Porto. Having lost the home leg against Man City 5-0, Sporting will be aiming to keep things respectable on Wednesday, knowing full well they have almost no chance of progressing any further in this season's Champions League.

Sporting CP: Matheus Nunes will miss the trip to Manchester due to suspension but Sporting have no fresh injury concerns.

Man City: Walker is suspended for the 2ng-leg, while Palmer, Dias, Ake and Steffen are all doubts through injury. 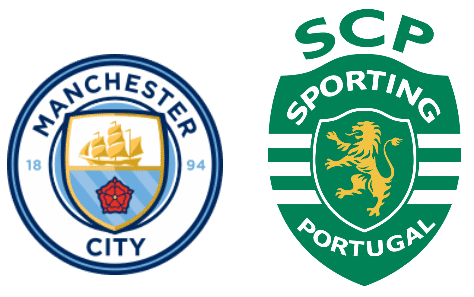