Liverpool head to Manchester City Saturday lunchtime for one of the Premier League’s most highly anticipated clashes. The two sides are likely to be up near the top of the table again come the end of the season, and both will be looking to take an early advantage over the other at the Etihad Stadium.

Last season there were many similarities in the way Pep Guardiola and Jürgen Klopp set up their respective teams.

The two sides led the league in terms of the possession they enjoyed with City clocking up an average of 61 per cent of time on the ball across all their Premier League games, and Liverpool coming in second with 58 per cent.

They also used similar versions of a 4-3-3 which saw the use of two wide attackers, an all-round striker, two attacking midfielders and one holder, and full backs who will bomb forward to provide extra width when given the opportunity.

As they prepare to face each other this weekend, there are a few areas where these two attacking teams could pick holes in one another, but none more so than in the areas occupied by their wide forwards.

If either side can get their quick attackers isolated in one-on-one situations with their opposing centre back, then there could be plenty of goalscoring opportunities.

In the opening games of this season Guardiola opted to use: a back three in defence, a narrow box of four in attack, wing-backs providing the width, and Fernandinho anchoring the midfield to form something close to a 3-1-4-2 when attacking.

This decision may have been down to the fact that the Spaniard didn’t have a recognised left back at his disposal, so opted to use either the attacking right back Danilo or the winger Leroy Sané down the left side.

But with specialist left back Benjamin Mendy ready for action following the thigh injury which kept him out of the club’s early games, the City manager switched to a back four in their recent 2-1 win against Bournemouth which mirrored the system he regularly used last season.

While the central striker was the focal point of the attack in the 4-3-3, this player would be heavily involved in some of the build-up play as well as being tasked with getting on the end of attacking moves once his work in deeper areas was complete.

It’s partly by coincidence and partly by design that these two strikers — Roberto Firmino and Gabriel Jesus — also lead the line in a similar manner for Brazil.

“Liverpool is the most Brazilian English team. They play the closest style of football to ours, with their triangular passes & scheme,” said Brazil manager Tite in February.

“Klopp is implementing jogo apoiado at Liverpool in his 4-3-3. The attackers are always moving, exchanging position. Dynamic system.”

Jogo apoiado translates as simply “position game” or “positional play”, which is a more basic version of the juego de posicion used by Guardiola.

Key to all of these systems are the attacking players who operate either side of the striker. These can be either traditional wingers, inverted wingers, wide playmakers, or inside forwards; but whatever the style of the player occupying this role, they will be asked to be one of the most attacking players in the side.

This season Liverpool have become even more similar to last year’s City side as they’ve added a second pacy winger to the front three in the shape of Mohamed Salah.

The attacking trident of Sadio Mané, Firmino, and Salah is very similar to the one containing Sané, Sergio Agüero (or Jesus), and Raheem Sterling which was seen at the Etihad last season.

Klopp’s side have played more competitive games than City so far this season due to their participation in the Champions League play-off in which they defeated German side Hoffenheim to reach the group stages.

In each of their five games so far, one or both of the wide forwards have been the most attacking players, with Firmino acting in a role which combines the jobs of a poacher, a target man, and an advanced playmaker.

The Brazilian has had a hand in almost all of Liverpool’s goals, whether this be scoring the goal itself, assisting it, or providing the second assist.

This has meant that the formation, when looking at the average positions in which the players are active on the pitch, can look something like a 4-4-2 diamond, with Mané and Salah’s movement as inverted wingers naturally taking them into more central advanced areas. 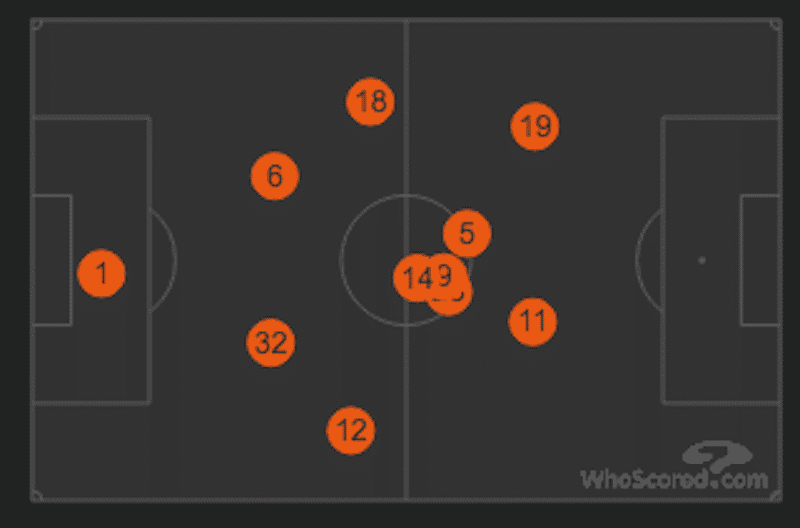 In the graphic above, from WhoScored, Firmino's (No 9) average position, in terms of his actions during the game, is sandwiched between the two attacking midfielders.

This holds true for City too, and in their first game using a 4-3-3 this season, new signing Bernardo Silva (No 20 in the graphic below) was the most advanced of the front three as he cut inside onto his left foot and moved forward from his starting position as a playmaker on the right. 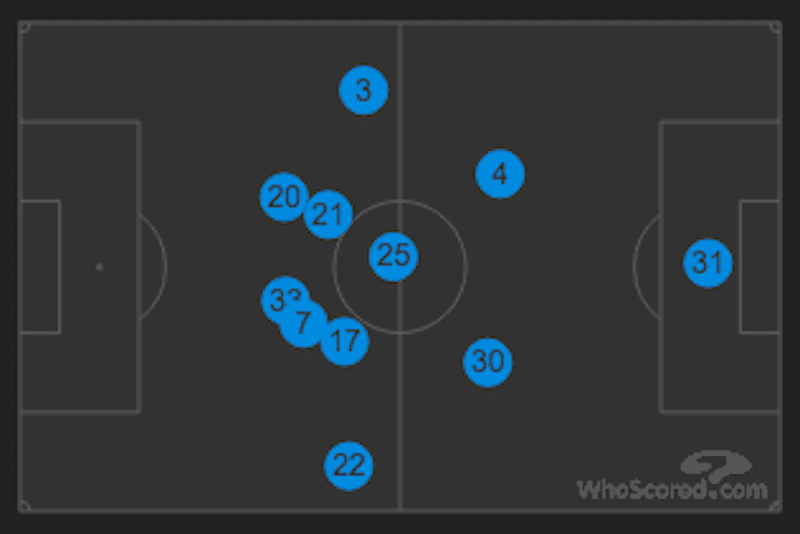 Their full backs are much more advanced than Liverpool's are on the earlier graphic, but this was probably due to the nature of the opposition each side were facing as Liverpool's had to do more defensive work against Arsenal than City did versus Bournemouth.

Guardiola is yet to beat Klopp in the Premier League and his best chance to turn this record around may be to match Liverpool man for man and prey on the left side of their defence, which has a weak centre and can often lack midfield cover for the full back.

Klopp will be hoping that this defence can hold up and that his midfield have learnt to cover the gaps left by his attacking full backs. However, letting this potent attack loose to wreak havoc down the channels in a City back line which has also shown signs of weakness, could be enough to win the game regardless of his side's performance at the other end.