Mamelodi Sundowns will welcome Al Merreikh of Sudan in Pretoria this weekend for the last group stage match of 2022 CAF Champions League tournament. The visitors have a chance to make a case for themselves in the quest for a playoff spot on Saturday. Read our match analysis and preview for the best tips, odds and betting tips for this match.

Mamelodi Sundowns look to stem their lead at the top of A in 2022 CAF Champions League. On the other hand, Al Merreikh of Sudan is at the bottom of the table but could displace second-placed Ahly if they win the next game by five goals to nil and the latter loses their next match. In a nutshell, it is a tight race for CAF Champions League playoffs and here is how we have tipped these teams to fare against each other this weekend.

It will be hard for Al Merreikh of Sudan to win this game. They have won only once in the ongoing CAF Champions League, drawing once and losing thrice. The visitors lost the last three games and playing away from home on the back of such a poor run of results poses a big challenge to their challenges of progressing in the competition. On the other hand, Mamelodi Sundowns have won four and drawn once in the competition and playing the last group stage game in such a form is why we expect the hosts to bag all points.

Mamelodi Sundowns to win with a clean sheet

We are tipping goals on one end of the pitch on Saturday. The hosts collected a point from a barren draw in the first leg. They dominated the game but only had one shot on target while Al Merreikh had four shots on goal. We expect a clean sheet victory for Mamelodi Sundowns after three consecutive wins ahead of this game, two of which were clean sheet victories. The visitors lost all their last three games, leaking seven goals and scoring three in those games.

We have sampled the latest stats, the best odds and H2H comparison for this fixture in the tables below.

Round 6 of the CAF Champions League 2022 between Mamelodi and Al Merreikh will take place in Pretoria, South African this weekend. These teams have had one encounter, which was the reverse leg that ended 0-0.  Mamelodi has the most possession of 57% but had only one shot on target in that game. On the other hand, Al Merreikh had 43% and four shots on target. However, none of the shots on target was converted into a goal. Both teams had three corners but only Mamelodi created a big chance, which they missed anyway.

Moreover, Mamelodi Sundowns played counter attacking football, getting one shot from that but it should be noted that both sides had nearly the same shots inside and outside the 18-yard box.  Mamelodi’s goalkeeper saved three shots, which highlights the need for the South African side to be more defensive in this second leg. 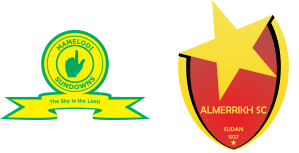 Where will Mamelodi Sundowns vs Al Merreikh take place?

The match will be played at the Loftus Versfeld Stadium in Pretoria, South Africa.

When is the Sundowns vs Al Merreikh taking place?

Mamelodi Sundowns vs Al Merreikh will kick off at 16:00 GMT +3 on matchday.