Bordeaux coach Jocelyn Gourvennec already knows the importance of his Brazilian winger Malcom and at just 20 years old, it’s clear to see why he is a rumoured transfer target for Liverpool and Manchester United.

Playing against Lyon at the start of last season, the former Corinthians youngster was on the scoresheet and one of the standout players as Les Girondins upset OL 3-1 in their own stadium.

With the game level, home captain Maxime Gonalons, now with Roma, went in heavy on the winger, making clear contact high up the Bordeaux man’s legs. The French midfielder was sent off and luckily, Malcom was ok to continue.

OL president Jean-Michel Aulas was quick to suggest that 20-year-old played up the situation to get a reaction, but Gourvennec was there to defend his star man, saying that it was very lucky he hadn’t broken his leg.

After six weeks, the Brazilian had nabbed three goals and was looking key to Bordeaux’s attack. In the new coach’s 4-4-2, playing off the right-hand side, the influence of the young winger was clear.

“Often, when Malcom is plays well, the team is good,” admitted the coach in December.

In just his second Ligue 1 campaign, Malcom has grown into a very exciting player. Finishing the season with seven goals and two assists and showing enough throughout the season to attract attention from some of Europe’s biggest clubs.

“This thing about Liverpool (and) Manchester – I don’t know anything about it,” said Malcom when asked about the English clubs coming to watch him.

“I’m very calm, I only think about Bordeaux today. I want to do my job well and give French fans lots of joy.”

Paris Saint-Germain, Inter Milan and Sevilla have all been mentioned, but the player wasn’t reacting to the speculation.

“I got to know, yeah, that [Jorge] Sampaoli likes my football, my game style. If the opportunity shows up, I’ll be happy. If it doesn’t, I’ll keep working hard, humble as always.”

It’s no surprise that the La Liga side are paying attention. They’ve had success in buying players from France, even signing Mariano from Bordeaux in 2015.

After joining from Guingamp, Gourvennec has survived a slow start and helped the French club finish sixth. Although just outside the UEFA Europa League places, a PSG victory in the Coupe de France final against Angers would see the place go to them, giving them a superb end to the campaign.

Yet, it might not be enough to keep the wolves from Bordeaux’s door, especially if Jürgen Klopp is looking for someone to play back-up to Sadio Mané.

Liverpool will be delighted to finish fourth, but they know taking on the Champions League while maintaining a charge domestically will require added fire power.

Mané’s departure to the Africa Cup of Nations in January gave the German coach a headache, so did his injury at the end of the 206/17 campaign as well as his recent suspension, so reinforcements are needed, with Malcom an ideal alternative to the Senegalese forward. 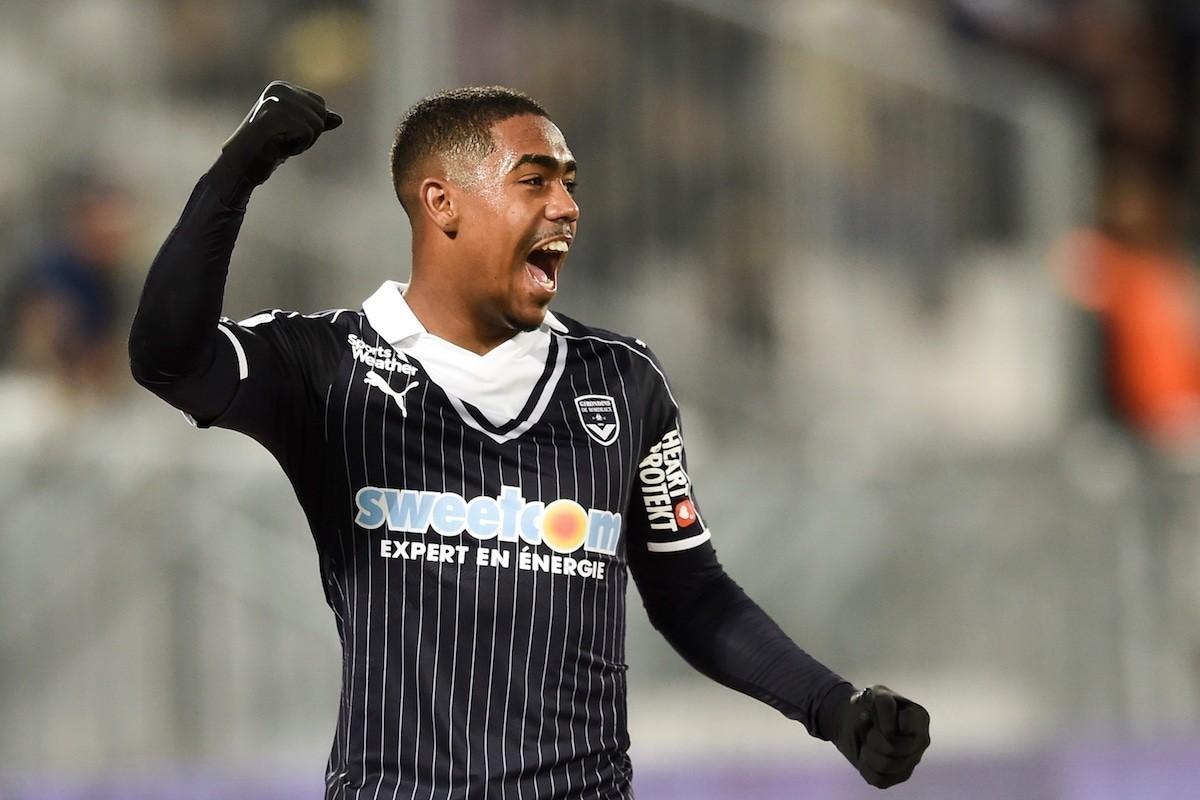 Like you would expect from a young Brazilian winger, Malcom is able to hug the touchline and loves standing up defenders inviting them to make a move.

His quick feet allow him to draw in his unsuspecting victims before beating them with pace.

Mostly playing on the right of a 4-4-2, he has also provided a No.10 option through the centre and this is something that could be developed. He is predominantly left-footed, but that doesn’t stop him beating defenders to the outside and his right foot isn’t just for standing on.

What he does do, which would be of use to Liverpool, is pop up at the back post and get on the end of crosses. More than just a flash winger, he has real predatory instincts.

Playing against Bastia, it’s Malcom that cuts inside off the flank to start the attack. With several defenders in his way, he opts for the ball out wide to the left-back. 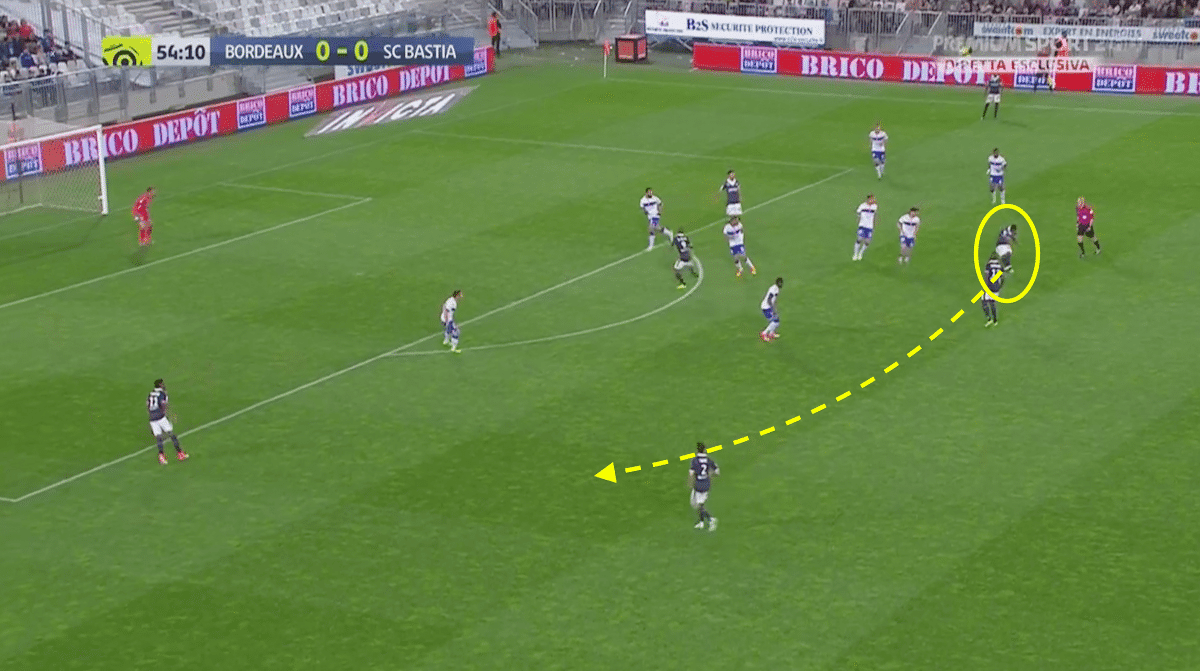 Rather than admire his work and see what develops, he then makes a move towards goal. By the time the ball is played back to the outside of the box, the Brazilian has placed himself on the blindside of the opposition left-back and is ready to pounce. 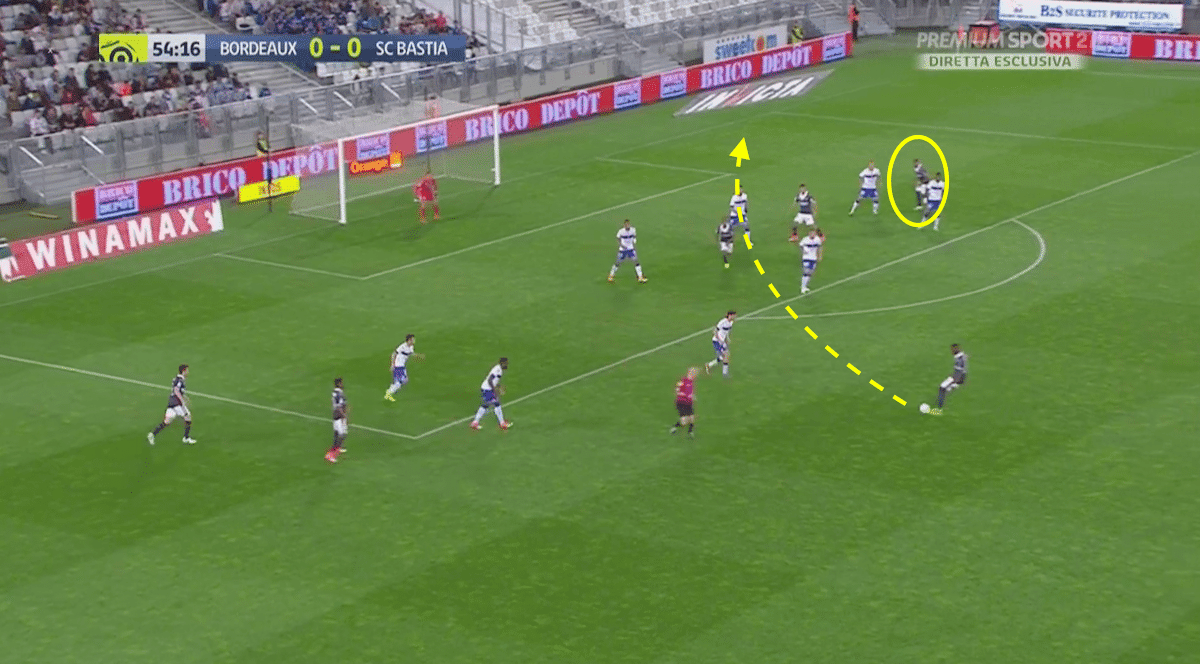 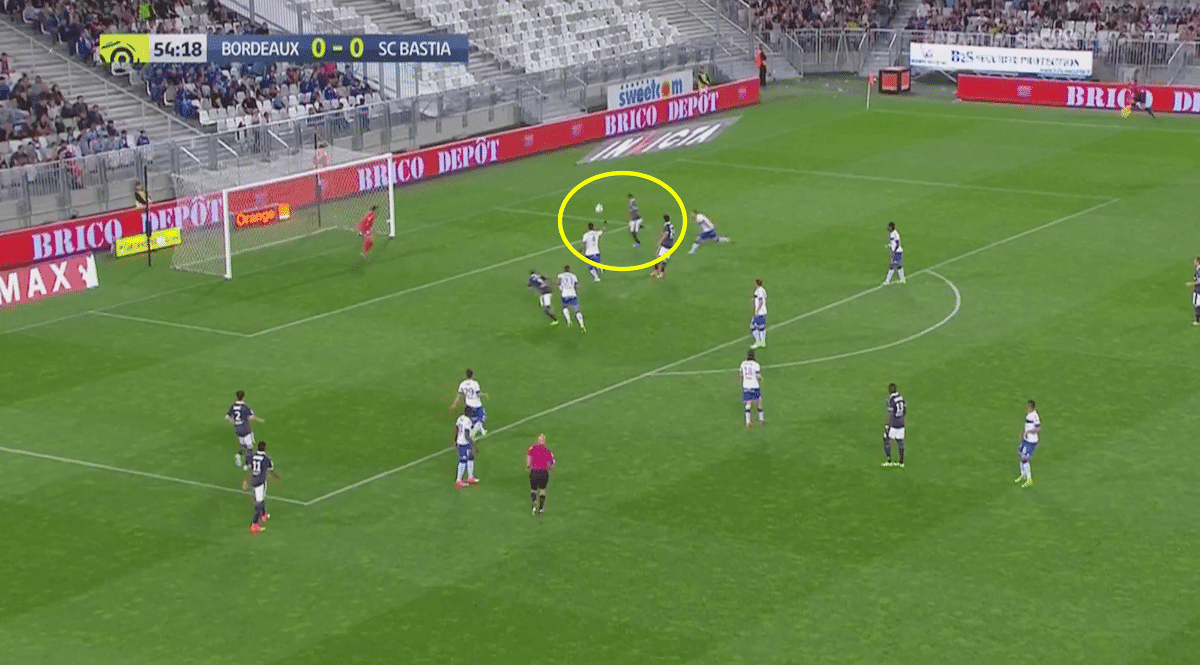 Younousse Sankhare picks out the left-footed pass and Malcom is there at the back post to volley home the finish. Demonstrating movement that some wingers can never develop, giving Bordeaux an option in attack that they’ve been crying out for.

When you have a player like Philippe Coutinho dropping deep to dictate play, or even Jordan Henderson when he returns to fitness. You need players to make runs off the ball, punishing defences when they switch off. That’s how you beat teams that sit back and defend in numbers.

Too many wingers, when playing on the opposite flank, have one thing on their mind: come inside, get the ball on their strong foot and shoot. 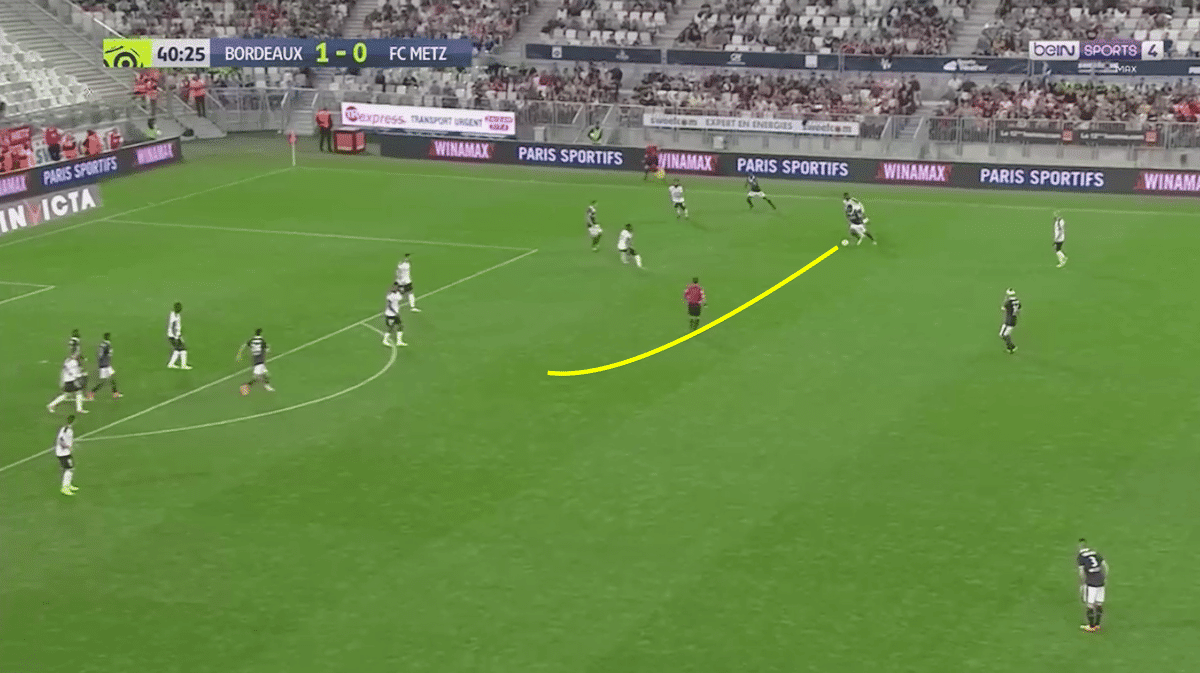 With as dangerous a left-foot as Malcom has, you wouldn’t be mad at the 20-year-old if he did that. However, he’s shown a much smarter edge to his game. 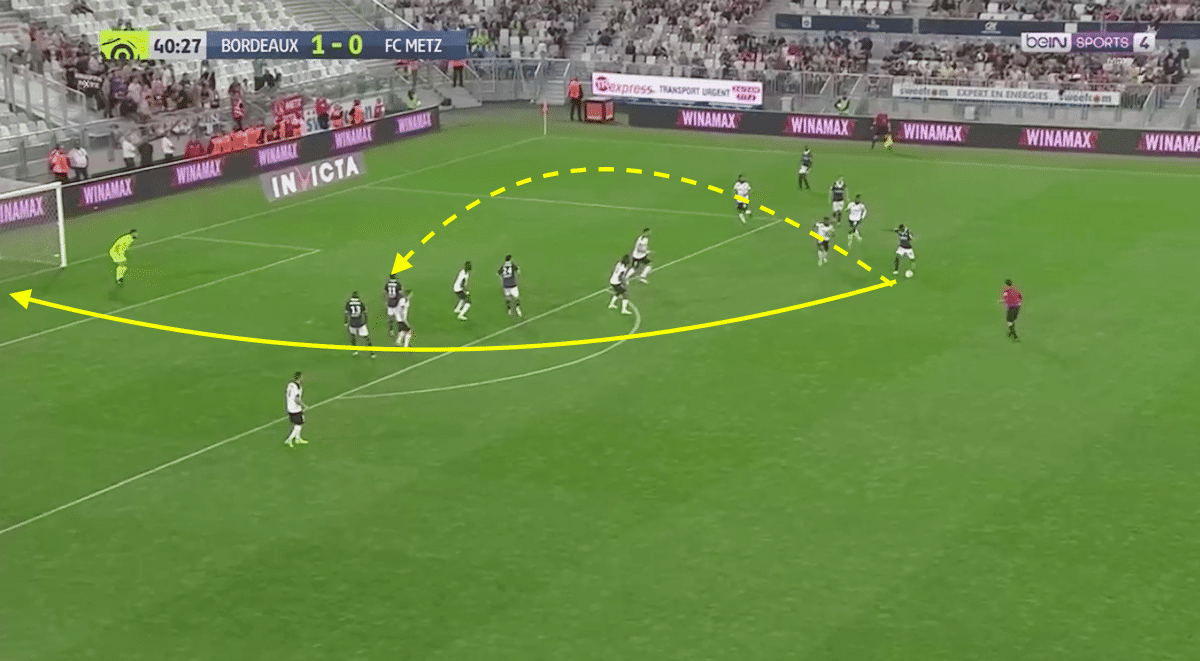 From the freeze frame, you’d be forgiven to think that he’s shaping to unleash a shot, and after scoring stunning free-kicks against Saint-Etienne and Nancy, you wouldn’t put it past him, but Malcom sees the runs from his team-mates and fakes to shot before dinking a lovely ball over the defence. 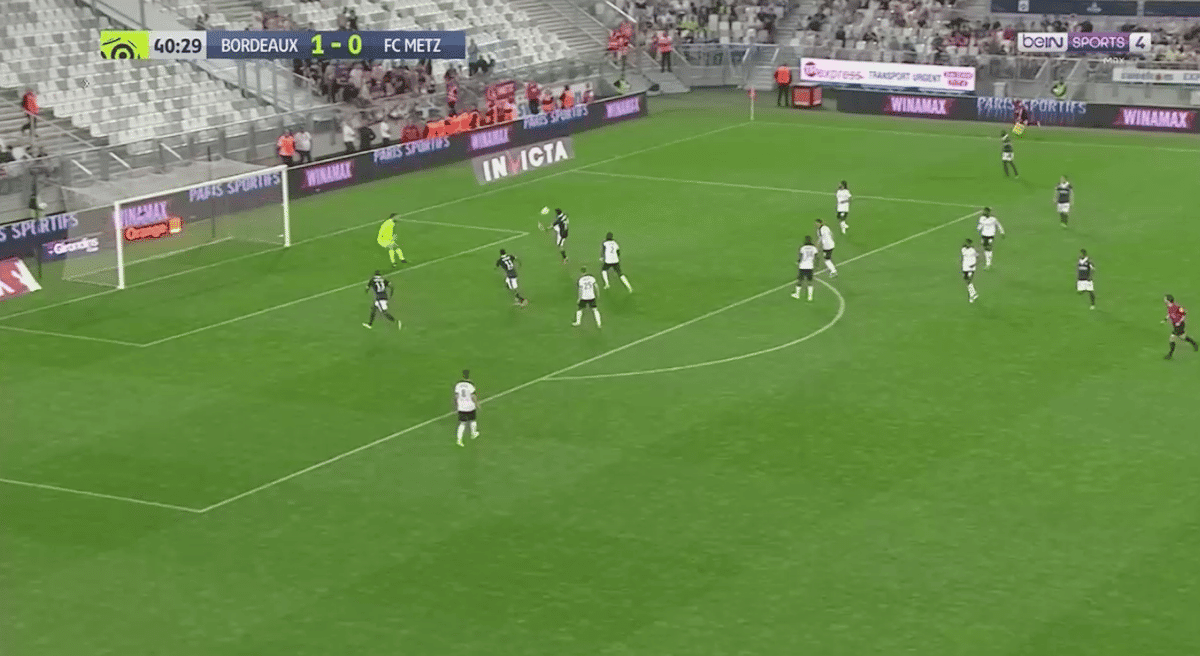 Gaetan Laborde meets the ball and but for a bad first touch, Bordeaux should have scored. Wonderful invention from the Brazilian, showing that he can spot and pick up his team when in a better position.

Recently, Liverpool have previously been linked with a move for PSG’s Lucas Moura, and if for the right money, it’s a deal that could work out well for both sides.

Yet, although contracted until 2020, Malcom would be available for upwards of €25million, if Bordeaux and the player were willing to do business. That’s less than what the Parisians would want for their Brazilian.

Four years his junior, when you match up the statistics, Malcom is not far behind what you would want. 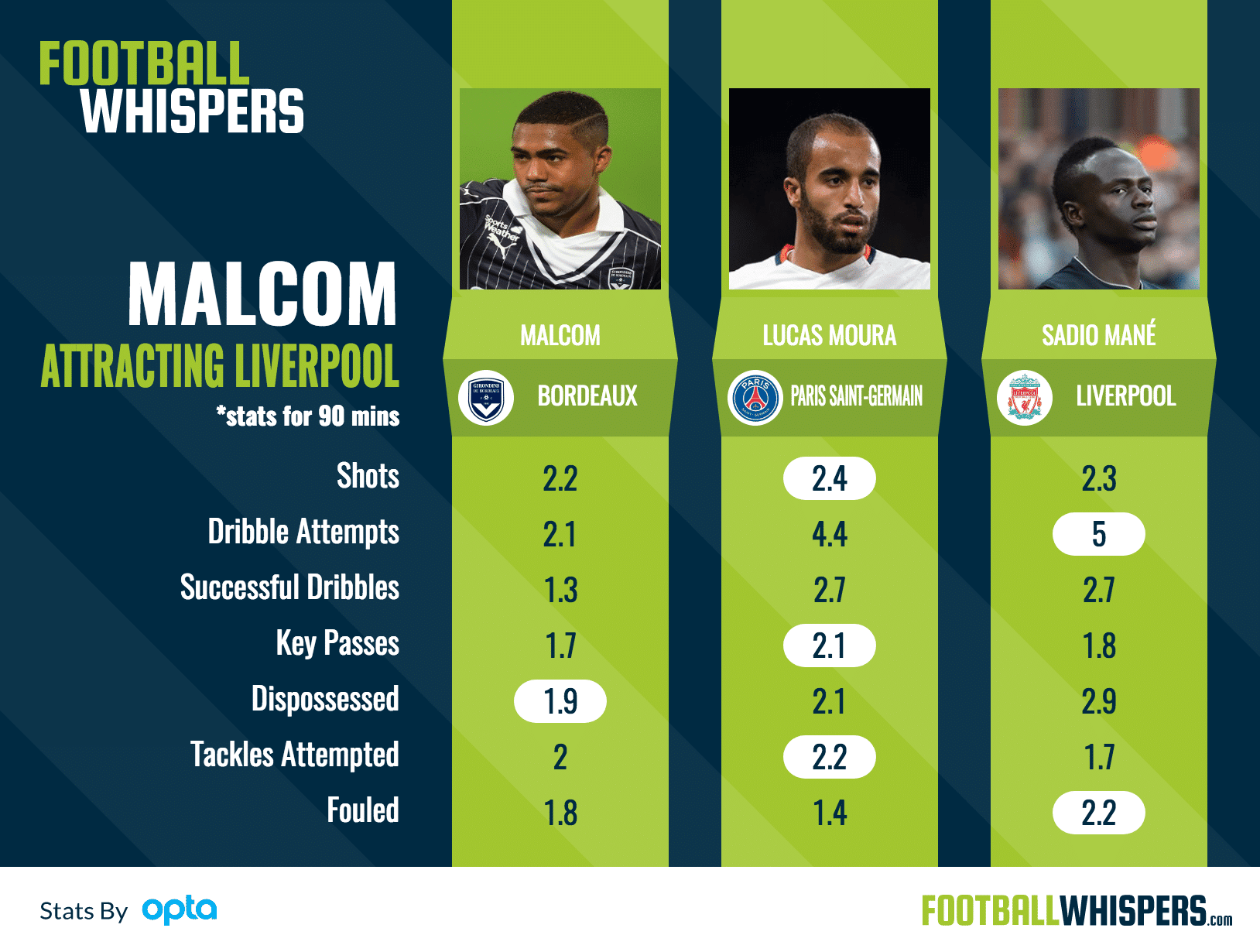 Close in terms of shots taken and the percentage that land on target.

He attempts fewer dribbles, but is more successful in terms of his completion rate. PSG see much more of the ball than Bordeaux do in Ligue 1, so it’s understandable that Malcom makes fewer passes, however, when you are completing around 15 more per 90 minutes, you’d hope his key passes would be higher than just 2.1 compared to Malcom’s 1.7.

The Bordeaux man is dispossessed less, so he’s adept at knowing when to give the ball up and not to lose possession aimlessly, plus you know the defenders are fearful of him when he is fouled 1.8 times per 90 – that’s 0.4 more than Lucas.

Rather than get caught up in the attention, when he speaks, he sounds like a young man with ambition and drive and knows what his goals are and that nothing will stop him trying to achieve them.

“I'm very chilled out. I'm only thinking about Bordeaux. I have [a] contract until 2020, this is a matter for my family and Fernando Garcia (his agent),” he told Goal.com. “I'm very focused on what I want, on the work I'm doing.”

He's focused, but ambitious, and that is the sort of player that Klopp and Fenway Sports Group target, making him an ideal winter signing.

“For me, it's not important which club and which championship I am in,” he said in a recent interview. “I want to play for a big club, in the Champions League, and win it.”

Liverpool are a big club, they're in the Champions League and they could win it.