Everyone’s looking for an edge. It’s what team analysts spend all week looking for before a match, fans try and find to win an argument, or punters scour for to choose where to place their few quid.

At Football Whispers, we’ve looked at three areas that could be the places to exploit across the Premier League weekend.

Liverpool’s injury problems play right into United’s hands. With Trent Alexander-Arnold, Joe Gomez, and Joel Matip all out, the right side of the Reds’ defence will be bare bones.

Dejan Lovren and Virgil van Dijk were the primary partnership during the latter half of last season, but the Croatian has rarely played this campaign. It was his lapse of concentration against Napoli that led to Alisson’s last-gasp clutch moment save.

This is the side where United are strongest in attack. Thirty-six per cent of their shot assists come from either the left wing or the left halfspace. The league average proportion is 25 per cent. 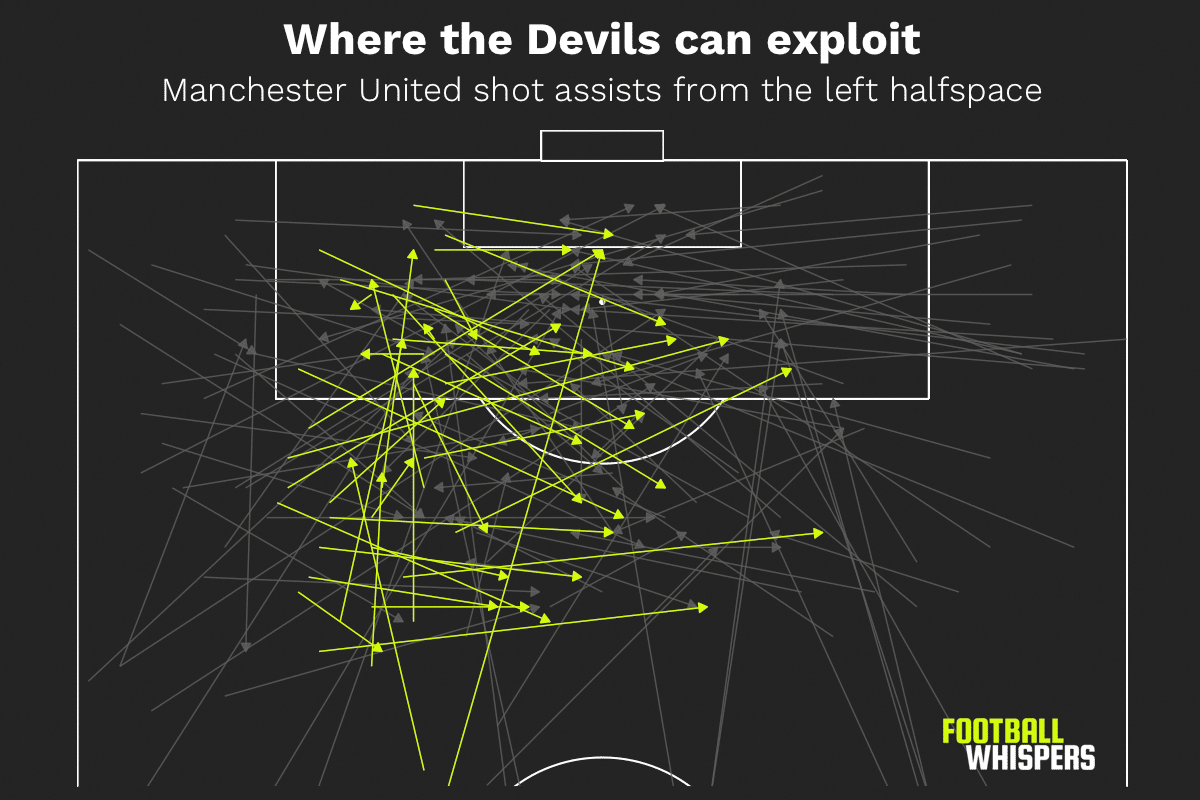 It’s both a strong point for Mourinho’s men, and a weak one for Klopp’s (albeit a weak spot relative to an overall very strong defence).

There won’t be many expecting Burnley to take anything from this game, away to Spurs, which is exactly why they need to exploit any advantage they can find.

Burnley’s attacking threat skews slightly to their right, where they have former-Tottenham man Aaron Lennon. If Burnley still had Kieran Trippier, they’d be an even greater threat from that flank. Sadly, for narrative’s sake, the full-back is an injury doubt for the game.

Spurs’ left is where they struggle, though, with neither Ben Davies nor Danny Rose offering an ideal defensive option. Four of the last six league goals that Mauricio Pochettino’s side have conceded have had crucial build-up down the left-hand side. 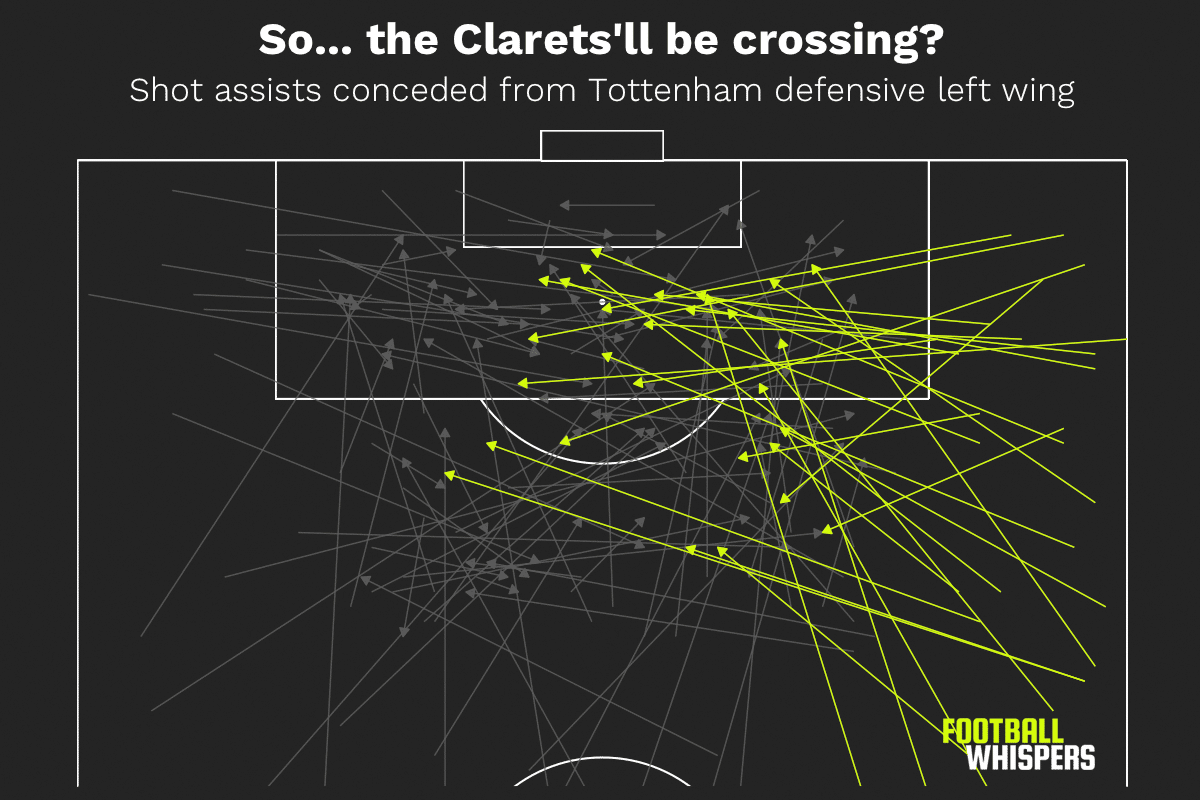 There’s also the small matter that Burnley are the league side who take the highest share of their shots with their heads (a whopping 27 per cent). The headed shots that Tottenham concede have the ninth-highest expected goals value, on average, in the league (0.16xG per shot).

Exploiting Spurs’ weak left flank and whipping in crosses could be a way for Burnley to get some joy.

Pep Guardiola’s side don’t need any extra help to pick apart teams and pick up points. Sadly for Everton, there’s an obvious point of attack for them, and it’s the same as the one their city rivals could be exploiting against the other Merseyside team in the league.

Thirty-two per cent of Everton’s key passes conceded, nearly a full third, come in their right defensive halfspace (or their opponents’ left halfspace). That’s the highest proportion in the league, unsurprisingly. 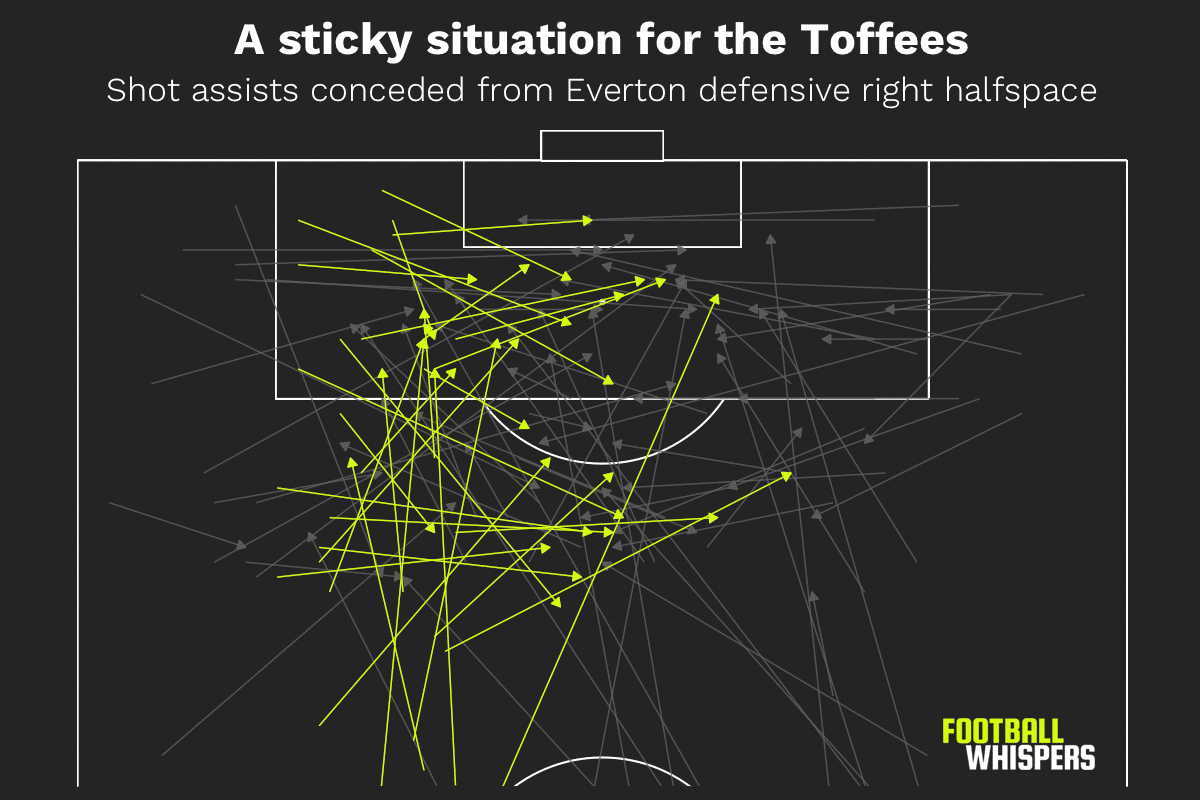 City will be without David Silva for this game, who’s usually such a dangerous operator in this space. However, they’ll still have a Leroy Sané in kingly form, and there’s a chance that Kevin de Bruyne could make a return.

Everton’s right — most likely André Gomes, Michael Keane, and Seamus Coleman — will need to be in top form to deal with the Citizens’ threat. They may have to do it without their key defensive midfielder Idrissa Gueye, who’s a doubt for the match.