The Bundesliga meeting between Mainz 05 and SC Freiburg promises to be an entertaining fixture. Both sides have started the season in blistering form and should make the trip to the Mewa Arena interesting.

The Carnival Club are unbeaten in their last three Bundesliga outings. They have a tough task on their hands as the Vultures makes the trip to the Mewa Arena. The visitors are unbeaten this season and will provide a tough test for Mainz 05. Nevertheless, we are backing Bo Svensson's charges to claim the three points on offer, as they had last season.

Only one of the four Bundesliga fixtures involving Mainz has finished with an Over 2.5 total goals. For Freiburg, the tally stands at two in four. However, this fixture has traditionally seen goals with four of the last five duels finishing with at least three goals on offer. With both sides scoring goals for fun and looking to maintain their winning run, we should have a high scoring affair on display.

In two of their last three meetings, both Mainz and Freiburg have troubled the scorers. This stands particularly true for the Vultures, whose last three outings have seen both sides get on the scoreboard. For Mainz, a clean sheet has been seen in each of their outings, once against them and thrice in their favour.

Mainz vs Freiburg: Check out the best odds and the latest stats

Match Preview of Mainz vs Freiburg

Bo Svensson's charges have continued where they left off from last season. The high performers are contending at the top of the Bundesliga charts and occupy the final Champions League qualification slot. While still far from conclusion, the fans at the Mewa Arena will be bursting with joy with their third find of coaching magnificence in Svensson after Jurgen Klopp and Thomas Tuchel.

While Svensson has garnered rave reviews for avoiding relegation with Mainz since taking over in January, Christian Streich's accomplishments with Freiburg are nothing short in comparison. The Vultures have sustained high-level performances and only a last-minute stutter in the 2020/21 campaign saw them miss out on Europea League. Freiburg are flying high this campaign, with two wins and two draws from their four Bundesliga outings.

Questions About Mainz vs Freiburg 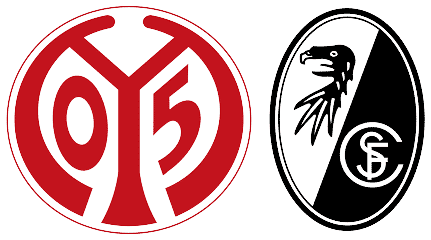 Where is the player to watch? Marcus Ingvartsen (Mainz) and Jeong Woo-Yeong (Freiburg).

Which team is the favourite to win? Mainz.