Riyad Mahrez has been consistently linked to each of the Premier League's top six clubs during recent transfer windows but none have made an official bid for the 27-year-old attacker.

But that is set to change, with Premier League champions Manchester City thought to be closing in on a £75million deal for the Algerian.

Leicester City were always going to demand a hefty sum for the former PFA Player of the Year – but he's worth it.

Many believed Mahrez's form during the title-winning season was a one-off and claim it can't be repeated. That may be true, it's unlikely he'll be involved in 28 league goals every single year, but he was involved in more than 20 this season with 12 goals and ten assists.

Even when you ignore the 2015/16 season, the Algerian international is still averaging a combined 15 goals and assists per season. Furthermore, when looking at his expected goals and expected assists you see he's performing roughly on par over the past two-and-a-half seasons.

He's also been involved in a goal every other game – not a bad record over 7,000 minutes worth of top-flight football. And he shone in the Champions League, involving himself in six goals in just nine matches.

Context is key, of course. So how does Mahrez stack up when compared to Eden Hazard, another elite playmaker in with a price-tag approaching £100million?

In the 2017/18 season, Mahrez averaged more accurate through balls and set play key passes per 90 than the Hazard, but the Belgian topped the charts for open play key passes and big chances created. Hazard also averaged considerably more successful take-ons and touches in the opposition's box.

Interestingly, though, Mahrez comfortably outperformed his xG with a goals-xG ratio of 2.41, as he scored more than double his xG of 4.97, whereas Hazard managed 1.71.

As you can see from Football Whispers' player comparison persona model below, Mahrez and Hazard have different strengths. Mahrez's game is built heavily on crossing and dribbling while the Chelsea star creates a significant amount of chances. 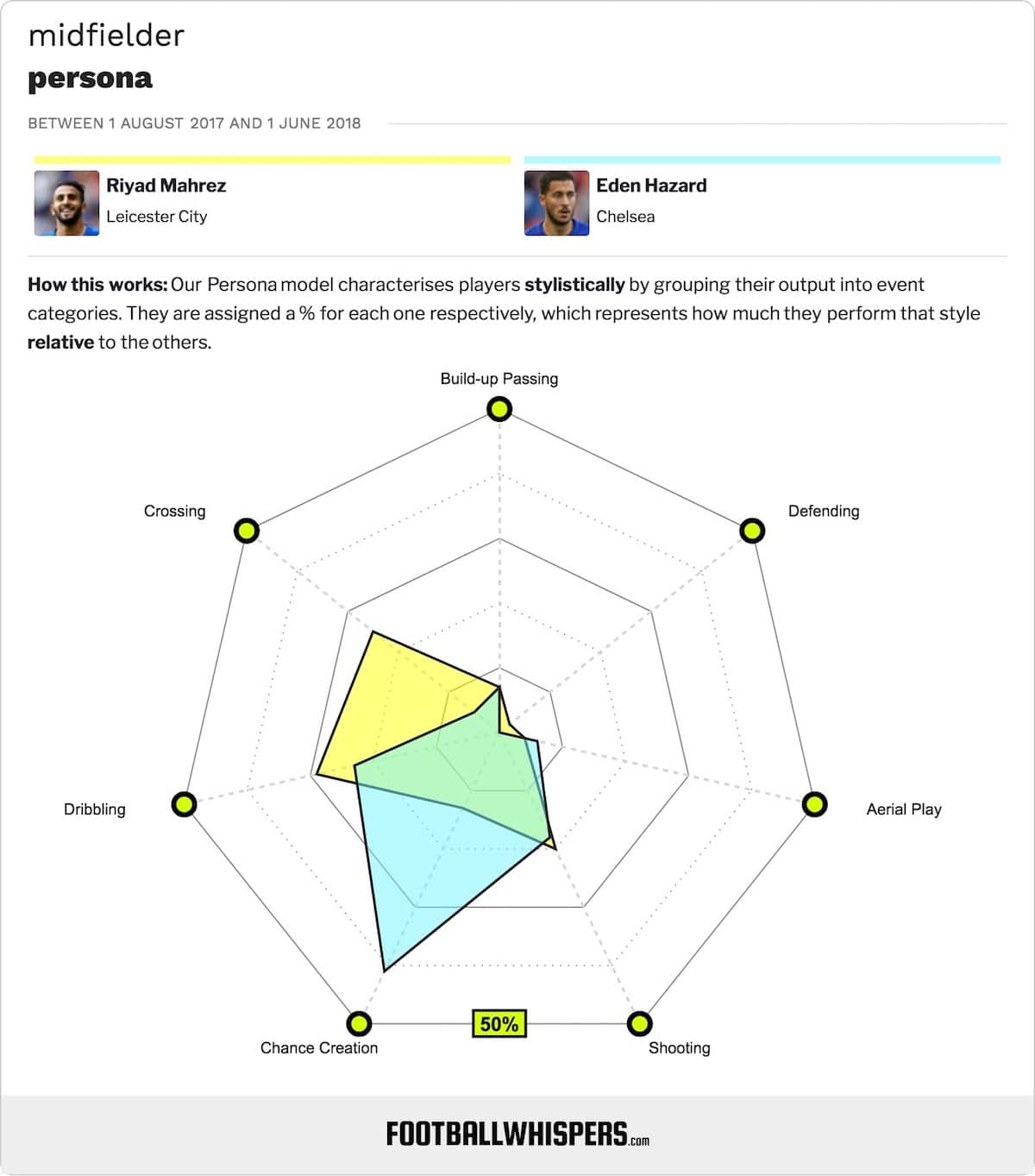 Mahrez has a contract at the King Power Stadium until 2020 but it looks as though this will finally be the window in which he gets his dream move to Manchester City.

Pep Guardiola's side aren't exactly crying out for another creative player, with David Silva, Kevin De Bruyne and Bernardo Silva already in their ranks. However, it's difficult to turn a blind eye when a player of Mahrez's quality becomes available and, should the deal go through, one of the most formidable attacking line-ups in world football would grow even stronger.