Manchester City have made deadline day interesting. Pep Guardiola's men, not content with adding Aymeric Laporte to bolster their ranks defensively, are looking to add to their impressive forward line. The Premier League leaders have netted 70 goals this term and are by no means thin when it comes to attacking options.

However, injuries to Leroy Sané and Gabriel Jesus has forced Guardiola to reassess his options heading into the business end of the campaign. The club, who recently pulled the plug on a potential deal to bring Alexis Sánchez to the Etihad because of his excessive wage demands, have identified Leicester City playmaker Riyad Mahrez as the man to ease their injury worries.

The 26-year-old Algerian International was a Liverpool transfer target earlier on in the season as the Reds looked for a replacement for the Barcelona bound Philippe Coutinho. A bid failed to materialise and it appeared as though Mahrez would once again stay at the King Power Stadium.

However, after City placed a bid in excess of £50million for his services he was sparked into life and handed in yet another transfer request. He wants the move. Leicester don't want to part ways with their midfield maestro on the final day of the window and, according to reports, have slapped a £90million valuation on their No.26.

It's unlikely City will go that high but the owners do back Guardiola in the market. A deal could be struck. So what would he offer? We've taken a look at his stats to work out whether he's a good squad options for the champions elect or just a fairly expensive stop-gap. 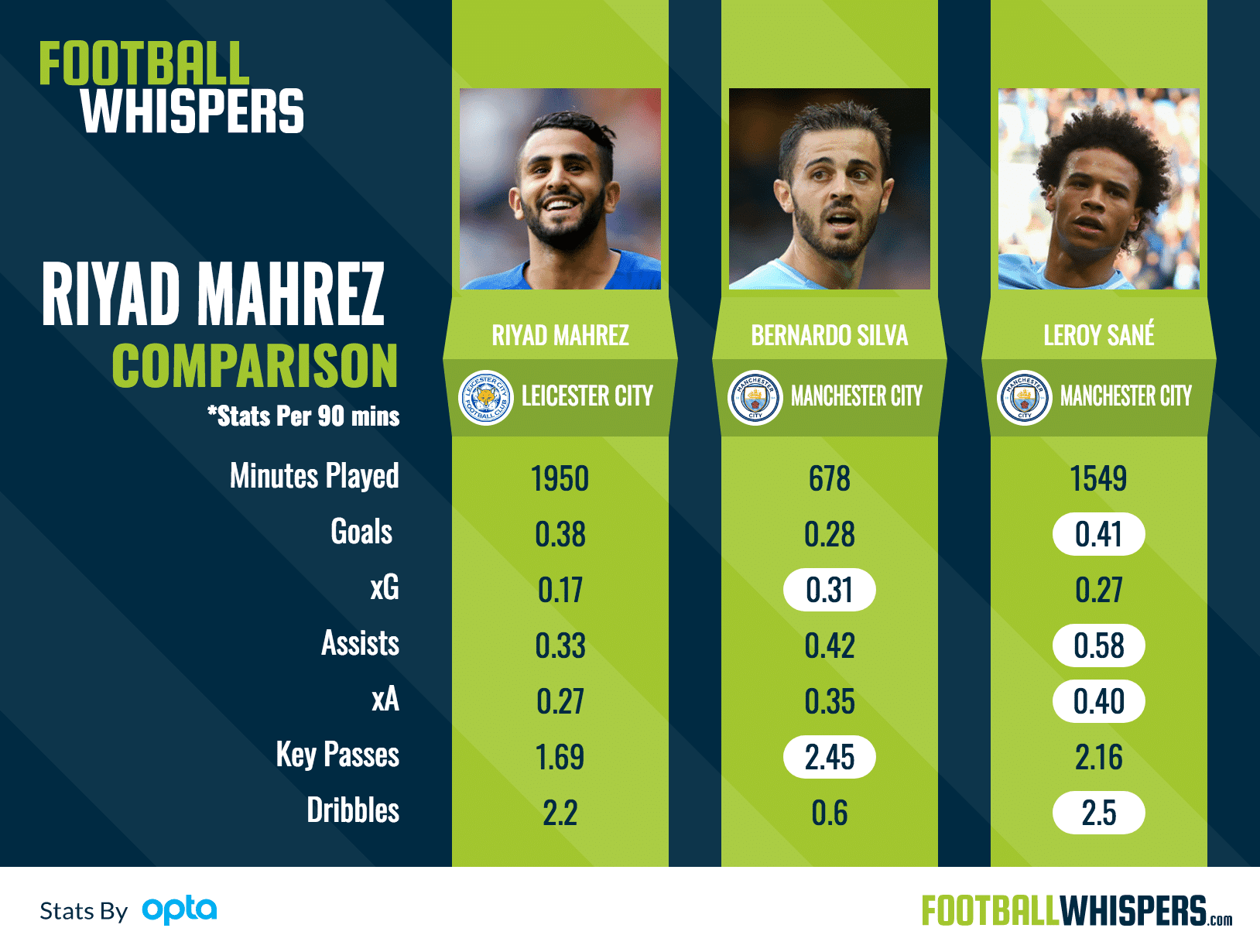 We've compared Mahrez to Bernardo Silva – the man many assume he'll be battling it out with for a place in the starting XI – and Sané – to see if he brings the same sort of style to the team as the German International.

We've included total minutes played in the Premier League but all other stats are per 90 minutes. It's perhaps unfair to compare the trio directly due to the fact they all play different roles and Mahrez is starting for an inferior team.

He might not come out on top in any category but his numbers shouldn't be overlooked. Dribbles completed is a transferable skill and he's only 0.3 behind Sané in this area. Key passes, xG+xA90 should all improve playing with better players.

He's currently outperforming both xG and xA meaning he's good at finishing off low quality chances. It's the sort of skill that may come in handy against a low block.

There's also an added bonus that he can play in the Champions League. All in all he appears to be a good squad player and City need quality as well as quantity. But £70million – a club record – is a huge amount for someone who won't be anything more than a squad player when all players are fit.