The domestic season is over and the transfer window is open. Even after amassing 198 points over the past two seasons, Manchester City will be looking to improve this summer. Pep Guardiola never stands still as he thrives for perfection.

No doubt in his mind, failing to match the points tally he managed during the 2017/18 campaign will irk him. It's just how he is.

With Vincent Kompany now player-manager for Anderlecht, there’s a hole in the City defence just waiting to be filled. Matthijs de Ligt was linked with the treble winners but looks to be Barcelona bound with team-mate Frenkie de Jong.

The market for world-class centre-backs is small and they come at a premium. The Premier League champions know this having had to part with close to £60million to sign Aymeric Laporte during the winter of 2018.

He was a shrewd investment. He’s been one of the best defenders in the world over the past 12 months and is easily one of the first names on Guardiola’s team-sheet. It’s why the recent links to Harry Maguire make very little sense for City.

The Leicester City man, a Manchester United transfer target last summer, plays the same position as Laporte. Both are left-sided centre-backs. Though the easy solution here would be to play the England international on the right, but it isn’t that straightforward.

Defenders aren’t as versatile as other outfield players. Switching sides may not seem like such a big change but players from playing on instinct to having to think about what they’re doing and where they’re positioning themselves. The elite play better when they’re on autopilot.

That isn’t to say defenders can’t learn how to play on the opposite side. But it isn’t a quick process and it comes with a high risk. Along with goalkeepers, tasking your centre-back with learning on the job is perhaps the most dangerous thing to do. But it is the sort of challenge that might interest Guardiola.

But is a player like Maguire even suited to City? 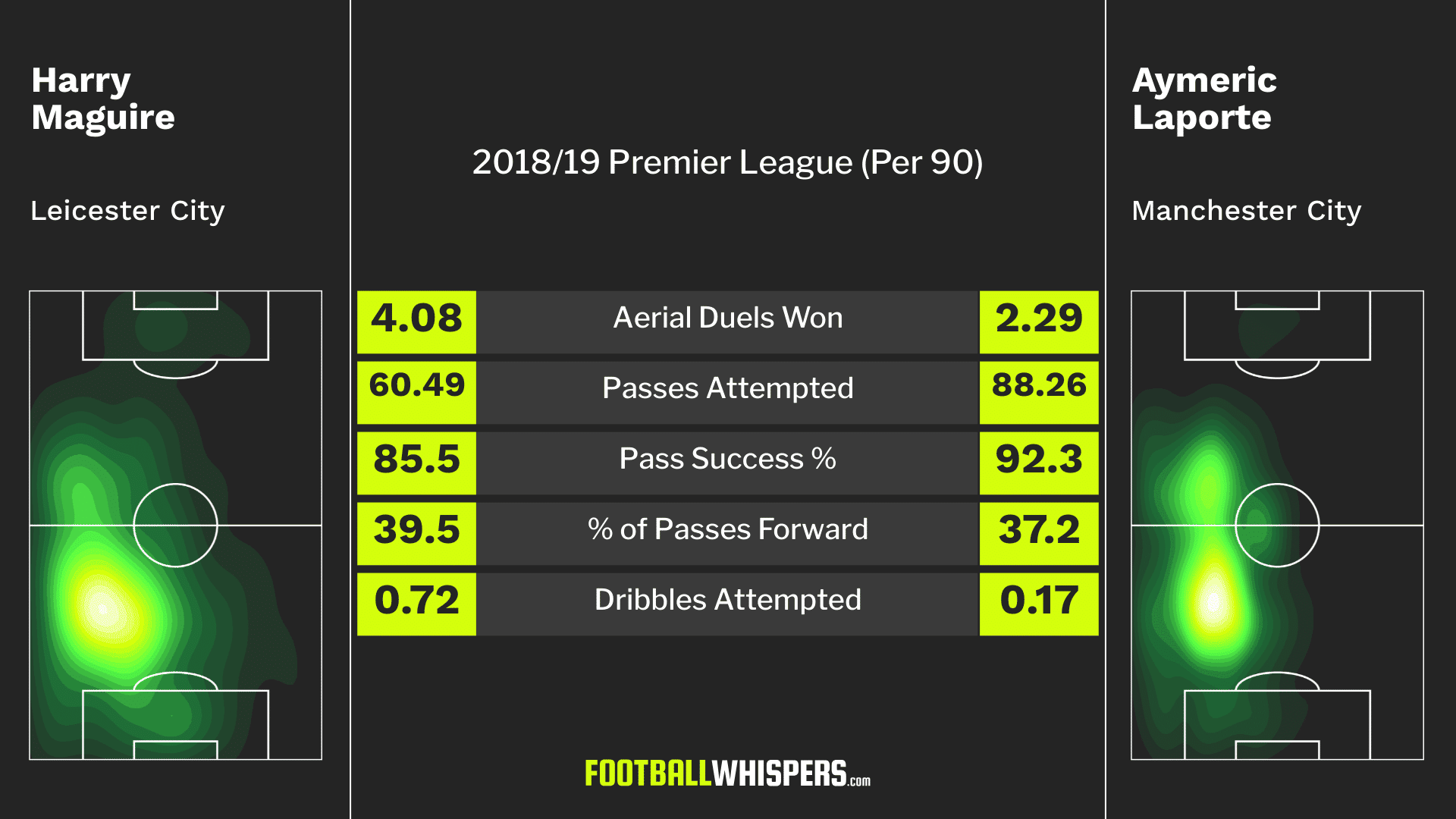 Yes and no. The Leicester City No.15 is one of the most confident ball players in the Premier League. The 60.49 passes he attempts on a per 90 basis puts him in the top 20 in the English top flight for defenders.

An impressive 85.5 per cent of them find the mark and close to 40 per cent of them are played forward. It shows he's progressive. He isn't wasteful despite seemingly taking chances with his passes.

But he's still trailing Laporte. It's expected, however. No team in the league dominates possession like City so it's only natural that their centre-backs see a lot of the ball.

However, it is telling that the Man City man sees more of the ball but plays fewer passes forward and attempts fewer dribbles. At times it can be monotonous. It can appear as though it is possession for the sake of possession. But Guardiola has a plan and the players must stick to it.

Maguire is a talent on the ball and one of his strengths is carrying it out from the back. He'd have more opportunities to do this for City but it doesn't mean he'd be allowed to do it as often. So that part of his game is potentially being stripped away.

Similarly, he's a powerhouse in the air. A trait he's not going to use as much with City as he does with Leicester purely because, well, there's not as much defending to do at the Etihad.

Maguire at City could work. But £60million seems like a lot of money for a player who doesn't fit the team from the off and one who would have to adapt his game to thrive for the Premier League winners.