Manchester United‘s 4-0 win against Chelsea on the opening weekend of the Premier League season has proven something of a false dawn.

Since that rampant display at Old Trafford, the Red Devils have failed to score more than one goal in a top-flight fixture.

Furthermore, Ole Gunnar Solskjær’s side have won just three of the nine games following the victory over Frank Lampard’s charges, one of which was a penalty shootout victory over Rochdale in the Carabao Cup.

Goals are at a premium. Daniel James and Marcus Rashford are joint-top scorers with three apiece and only five United players have managed to find the back of the net so far this term.

The current narrative is that the 20-time champions of England need attacking reinforcements. To an extent, it’s true. They parted with Romelu Lukaku and Alexis Sánchez during the summer transfer window without bringing in any replacements.

But one of the biggest issues at Old Trafford this season is the supply line to their attackers. Only one player in the United team has an open-play expected assists per 90 average of over 0.15 – Paul Pogba.

Solskjær might need to invest in a clinical forward – it’s why links to Lyon’s Moussa Dembele make sense – but he needs to bulk his squad up with creators if United are going to find their goalscoring groove.

Chances have to come from somewhere and, according to reports, the Red Devils are looking at two potential midfielders ahead of the January transfer window.

Leicester City’s James Maddison is being linked with an £80million move to Old Trafford while Solskjær is believed to be keen on linking up with compatriot Martin Ødegaard.

Both have made eye-catching starts to the 2020/21 season. Maddison is pulling the strings for Leicester City, who sit third in the Premier League and are genuine contenders to gatecrash the top four this term.

Ødegaard, on the other hand, is the poster boy for a revamped Real Sociedad side who might be one of the most exciting teams in LaLiga.

The Evening Standard claim United scouts have been monitoring Maddison for some time but he’s second on the club’s wishlist behind Jadon Sancho.

The Ødegaard development is new with United impressed with how he’s acclimatised to his new role in a new team this year. He was starring in the Eredivisie last season, now he’s one of the most potent creative forces in Spain. 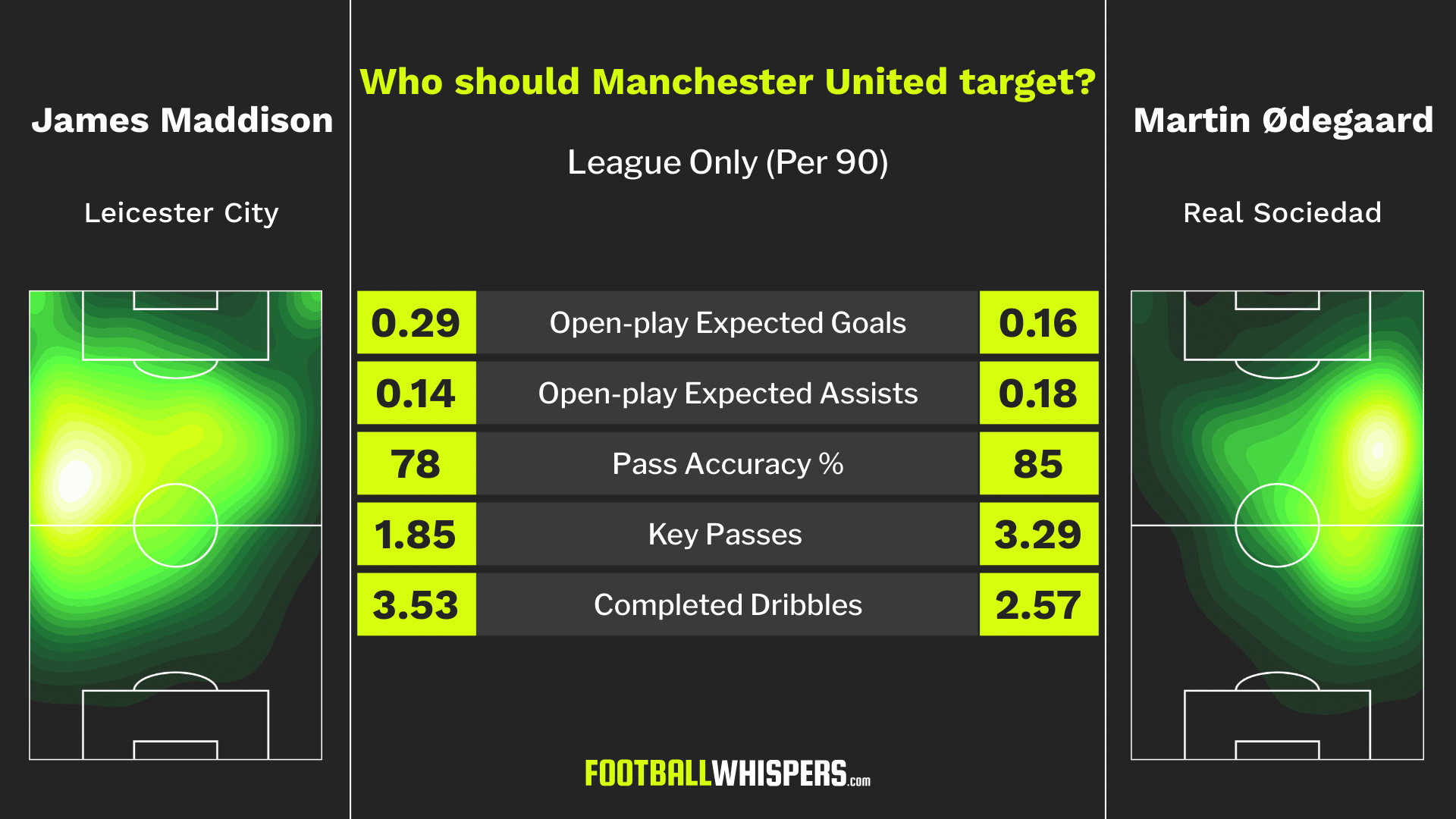 We're only a handful of games into the new campaign but both creators are posting numbers elite clubs can't ignore.

Maddison, starting on the left on an attacking three, often drifts into central areas to impact the game. So far this term, he's averaged 0.29 expected goals and 0.14 expected assist per 90. Last season, the former Norwich City man averaged an expected assists total of 0.18.

He's consistent, and this while not being deployed in the centre of the pitch. It's nothing more than theory at this stage but the prospect of Maddison dictating proceedings from that area of the pitch should see his numbers, both expected and actual, swell.

He's benefitting from one-on-one situations out wide to complete 3.53 dribbles (70 per cent). The caveat is this might drop off if he comes into more crowded areas. However, the ability to beat a man as a ball-carrier is something all midfield units need.

Ødegaard is slightly different. Though he's been around for what feels like an eternity, he's still only 20. He doesn't yet have a defined role but this year he's playing in midfield for Real Sociedad. He could play as an attacking midfielder or even as a wide forward in the right system. His versatility is a selling point by itself.

This season, the Norway international is averaging 0.18 expected assists. What is remarkable when looking at his numbers, however, is the fact he's completing 3.29 key passes, which highlights Ødegaard's desire to play incisive and progressive balls, all while completing 82 per cent of his passes.

Usually, there's a drop off in pass completion as a creator yet the on-loan Real Madrid star doesn't waste possession.

If it was a straight shootout between the two then United's next move will tell the world a lot about their mindset. If they're genuinely looking to rebuild and recruit intelligently Ødegaard would be the logical choice. Real Madrid will want big money but it would be less than the £80million the Foxes want for Maddison.

However, if the Red Devils are determined to make an impact immediately then the Leicester No.10 is more of a sure thing having performed in the Premier League.

On paper at least, he wouldn't need time to adapt. But just throwing money at a team doesn't immediately improve it, as United have found out in recent seasons.

One thing is for sure, though, these are exciting talents. If Solskjær manages to add one of them then it'd go some way to fixing the problem currently plaguing the Red Devils.