It's hard to look beyond Ryan Sessegnon when naming the best young player in the Championship this season, but Norwich City‘s James Maddison is pushing him hard for the award.

The 21-year-old has starred in Daniel Farke's Canaries side and his form has caught the eye of a number of Premier League clubs.

Manchester City, Tottenham Hotspur, Everton, Newcastle United, West Ham United, Arsenal, Huddersfield Town, Leicester City and Liverpool have all had scouts at Carrow Road throughout the campaign to watch the versatile playmaker, who has continued to pull the strings from an attacking midfield position.

He's been involved in 22 goals this season in a little under 3,500 minutes – it equates to a goal or an assist every 159 minutes. Only Bristol City's Bobby Reid has had a hand in more goals at this level.

Maddison has notched 14 times in the Championship and just four players have found the back of the net with more regularity.

It's widely accepted by those who support the club that their prized asset will be on his way to the Premier League this summer but it's doubtful very few will mind if the reported £30million fee is accurate.

His rise through the ranks was inevitable. The talent he possesses meant he was always destined to be plying his trade in England's top flight at some stage. Norwich swooped to sign the midfielder ahead of Liverpool and Arsenal, whose interest in Maddison dates back to 2015, from Coventry City in a deal worth £3million back in January 2016.

The youngster rejected a move to a Premier League club in favour of first-team football. He had got the taste for it while turning out for Coventry and believes playing regularly helped his hugely benefitted his development.

“Even though I’m only 21 I feel like I’ve been in the game quite a while. That is the beneficial thing about being lower down the leagues. Me being at Coventry, instead of a big Premier League club, probably helped me develop.

“You don’t get put in the academy system, playing under-18s and under-23s. I got to play first-team men’s football from a young age.”

And now he's reaping the rewards. 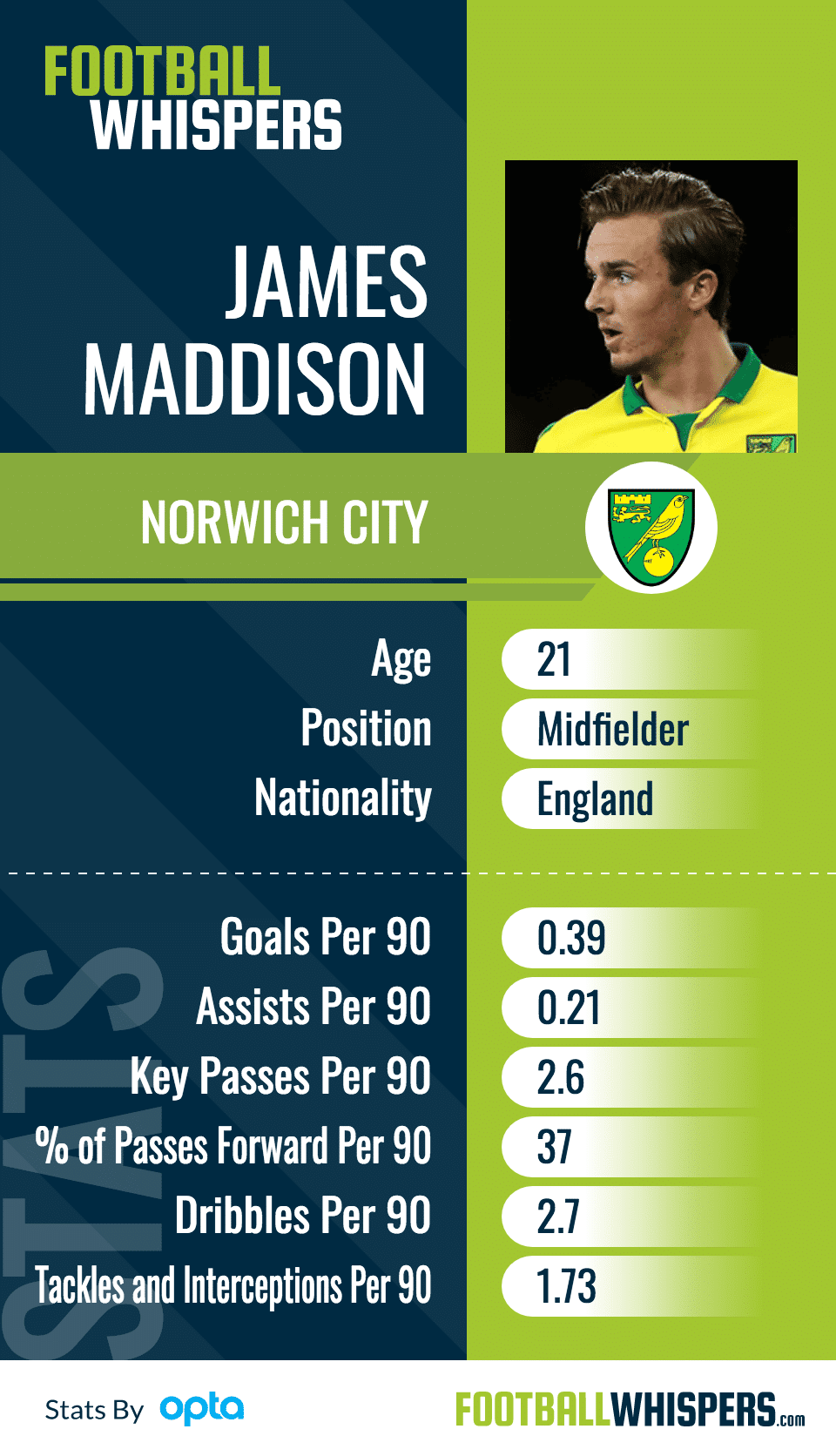 He made his first-team debut for Coventry as a 17-year-old. He scored his first goal for the club not long after, a deflected free-kick in a 4-1 defeat to Oldham Athletic. Steven Pressley, the then manager of the Sky Blues, saw something special in Maddison and entrusted him with being the team's playmaker. The added responsibility didn't hinder him. Instead he flourished.

The bigger clubs came knocking and Norwich convinced the youngster to leave his hometown club. The Canaries loaned him back to Coventry for the remainder of the 2015/16 season and the chance was there for him to return to League One the following summer. But, eager to develop, he opted to make a move to the Scottish Premiership for the first half of the 2016/17 campaign and joined Aberdeen.

He made himself a firm favourite at Pittodrie after netting a last minute winner against Rangers. He returned to the Championship club having scored twice in 14 games, however, the move wasn't about pure statistics, it was about Maddison maturing as a player.

He was targeted during his time up north. Aberdeen manager Derek McInnes mentioned it when praising the midfielder: “He takes a lot of kicks and a lot of knocks”.

It may seem like a very British thing to mention but it's the sort of experience players only get from high stakes first team football. It helps prepare players for the rigours of top flight football.

Though he's still only 21, Maddison has featured in over 90 matches and gives off a seasoned veteran vibe. He's robust, rides challenges and is not easily shaken. He's battle-ready despite his babyface looks.

He's still learning, of course, but players always are. There's a swagger about his game but that's not misplaced arrogance or youthful naivety, it's confidence bred from playing regular football. He knows what does and doesn't work.

What are Maddison's strengths?

He's been compared to Dele Alli and there are similarities between the two, not just in style and in the path taken to reach the top but also the mentality both possess.

There's a desire to be the best and because they've been exposed to senior football from such a young age they the advantage of knowing they aren't just good enough, they're strong enough. It gives them an edge and this is one of Maddion's strengths.

When he's on the ball expect the unexpected. That unpredictability is a rare trait for a player to have, especially one trained in England, but the 21-year-old has it and it's one of the reasons he thrives in the No.10 role.

He's got the technical ability and close control to wriggle out of the tightest of situations. He creates space when it doesn't look possible and he's comfortable with both feet meaning defenders can't show him onto his weaker side.

It was evident in his goal against Hull City. 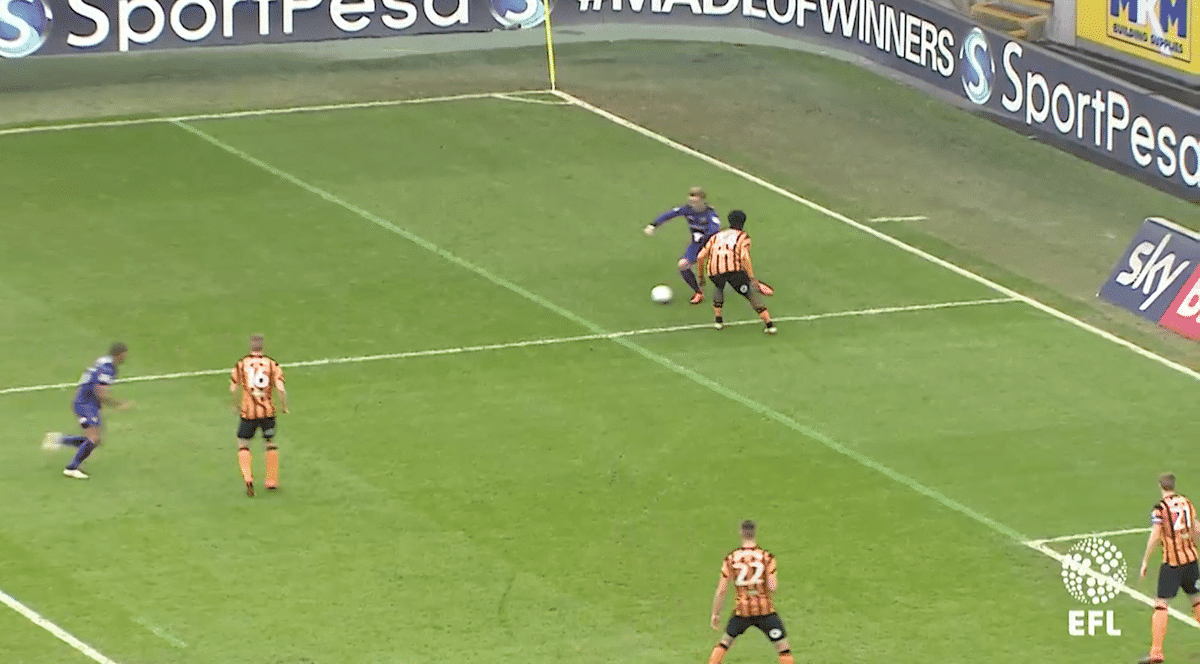 Maddison picked the ball up and was showed down the outside. The Hull player allowed him to cut back onto his right foot and he worked his way into the penalty area.

The Norwich No.23 tried to work an opening to fire a curled effort goalwards but the home side had enough bodies in the way. 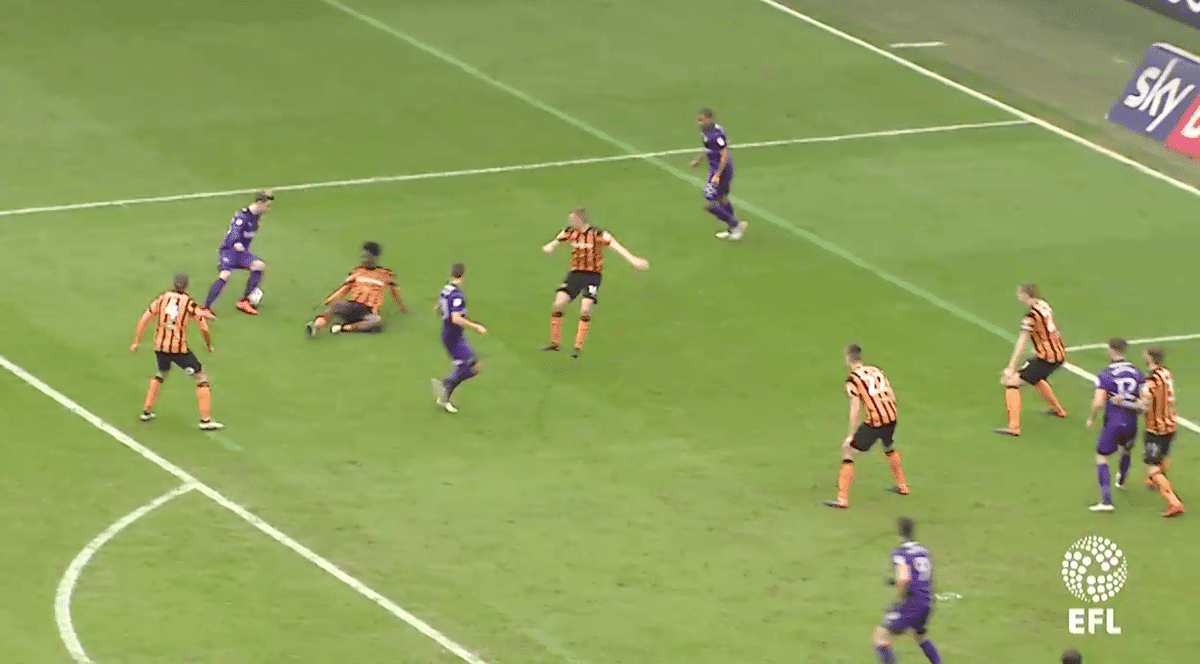 The attacking midfielder then feints and turns back onto his left foot – a move which takes two players out of the game. Before anybody can get close enough to him he rifles home a left footed drive.

In the blink of an eye it went from a controlled situation to a dangerous scenario, and this in a crowded penalty area. All because Maddison can strike a ball with either foot.

He can do just as much damage if given time and space. 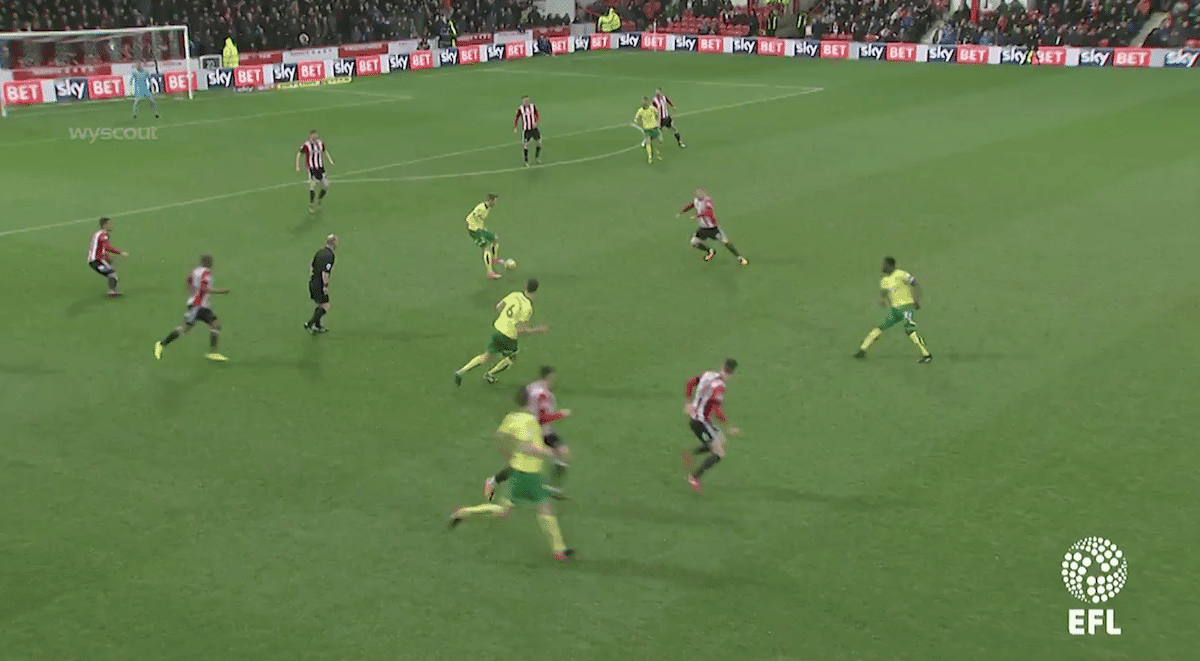 In the picture above you see Maddison has dropped off into an area just ahead of the Brentford defence.

The ball is played into his feet and, with him being on the half turn when he receives it, he's able to quickly see the man coming, meg the unfortunate player and create even more space for himself. 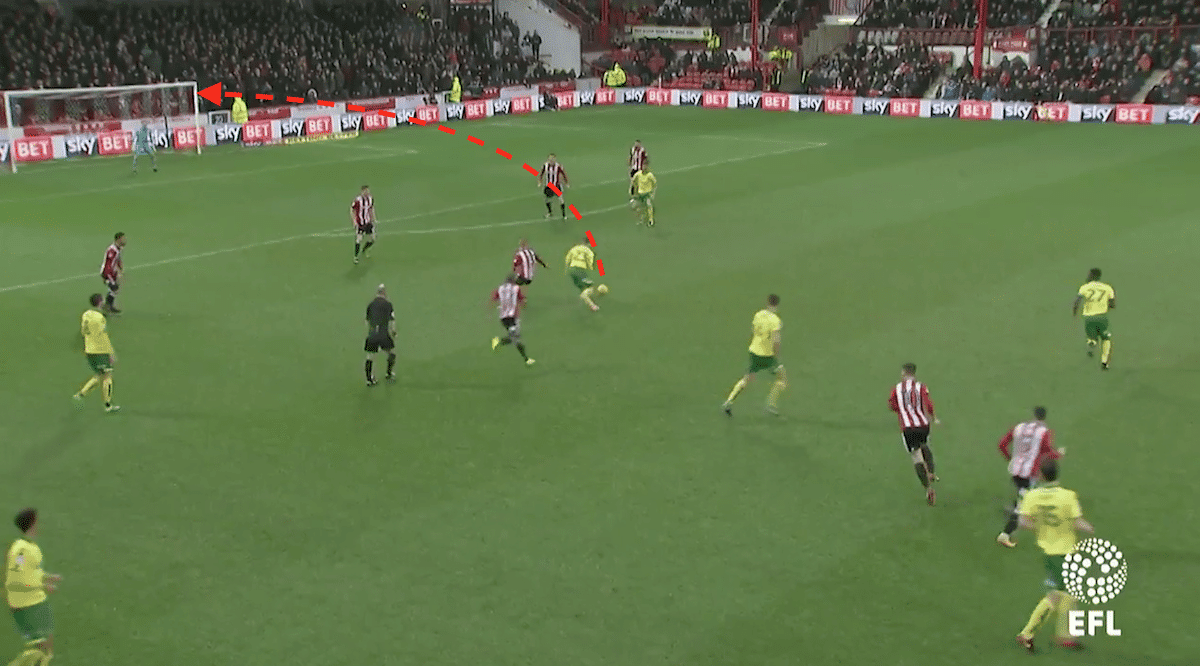 He then unleashes a superb strike which is past the goalkeeper before he's even managed to get his hands up. Maddison is wheeling away in celebration before the keeper hits the floor. The technique is exquisite and the decision to attempt such an effort is outrageous.

Maddison has the passion, drive and determination of a quintessential English midfielder but the technique and guile of a Spaniard. It's a bold claim but he's good enough for the majority of the top ten teams in the Premier League and playing in the top flight will only see him improve.

The fees being reported may seem steep but, if he develops as expected, he could turn out to be a bargain down the line.