Lys Mousset has made plenty of Premier League appearances this season. Unfortunately for the Frenchman, most of them have been as a substitute.

The Bournemouth striker has been introduced from the bench no fewer than 23 times, starting just once, in a 5-1 defeat against Arsenal at the Emirates in February.

Manager Eddie Howe has repeatedly heaped praise on Mousset, insisting that he will be a big part of the club’s future. But he has been unable to establish himself in the first team since his arrival from Le Havre in 2016.

Mousset has managed just five goals in all competitions during his three years with Bournemouth, though that is largely a consequence of his lack of game time. This season, for all of Howe’s encouragement, he has played a total of just 350 minutes in the Premier League.

A move this summer, then, does not seem out of the question. Celtic have been linked with Mousset, who could, according to the Daily Mail, be signed for around £10 million. Here, we take a look at his strengths, weaknesses and style of play ahead of a potential switch during the transfer window.

Who is Lys Mousset?

The future looked bright for Mousset when, in the 2015-16 season, playing under former Swansea manager Bob Bradley, he hit 14 goals in 29 appearances for Le Havre in the French second tier. Just 19-years-old, it was his breakthrough campaign having spent nine years working his way up through the club’s youth system.

It was clear that Mousset, who caught the eye with local clubs Soquence Graville and Havre Caucriauville before joining Le Havre, was a unique talent. Born to a Senegalese father and a French mother, he made his debut for the France Under-20s in 2015.

His form with Le Havre attracted interest from several top-flight clubs, but it was Bournemouth who secured his signature in the summer of 2016 for a fee of £6 million.

“Lys is another player with great potential whom we are delighted to bring to the football club,” Bournemouth chief executive Neill Blake said when the transfer was confirmed. “We’re always planning for the future and Lys is not only a young player with exciting potential, but someone who had a massive impact for their club last season.”

The intention, clearly, was to ease Mousset into the first team. In his first season, though, he made just 14 appearances in all competitions and struggled to adjust to the Premier League. He voiced his frustration, too, insisting that he deserved more of a chance to impress Howe.

“If I wanted to be third, fourth or fifth in line as a striker, I could have signed for Arsenal or Tottenham,” Mousset told French newspaper Paris-Normandie. “It's bizarre, but I feel like I've been left to one side, and it annoys me to think I might go a season without scoring.

“Frankly, I feel like I'm a spectator. I can't stay like this. I always dreamed of being in England, but not in these conditions.”

Mousset has since featured more regularly, but he remains on the periphery. A move elsewhere, then, could be what is needed to reignite a stuttering career.

The most noticeable aspect of Mousset’s game is his impressive strength. The 23-year-old is comfortable playing with his back to goal, receiving the ball into his feet, holding it up and bringing others into play.

He is a powerful runner, too, capable of surging past defenders. And he is an accomplished finisher when presented with opportunities.

He has not been able to showcase his strengths often enough at the Vitality Stadium, but he remains a striker with significant potential. In the 350 minutes of league football he has played this season, Mousset has averaged 0.25 goals and 3.09 shots per 90.

He has a clever passer of the ball, too, recording an average of 1.03 open play shot assists. And he has an xG per 90 of 0.29. With more regular football, he has the makings of a reliable goal scorer.

“He’s such a talented player,” Howe said of Mousset in March. “We really believe he has all the attributes he needs. He’s quick, strong, powerful, good technically and knows where the goal is.”

Mousset is still relatively raw, which perhaps explains Howe’s reluctance to start him. A bustling, physical forward, he can occasionally lack subtlety, the deftness of touch sometimes required in the final third. 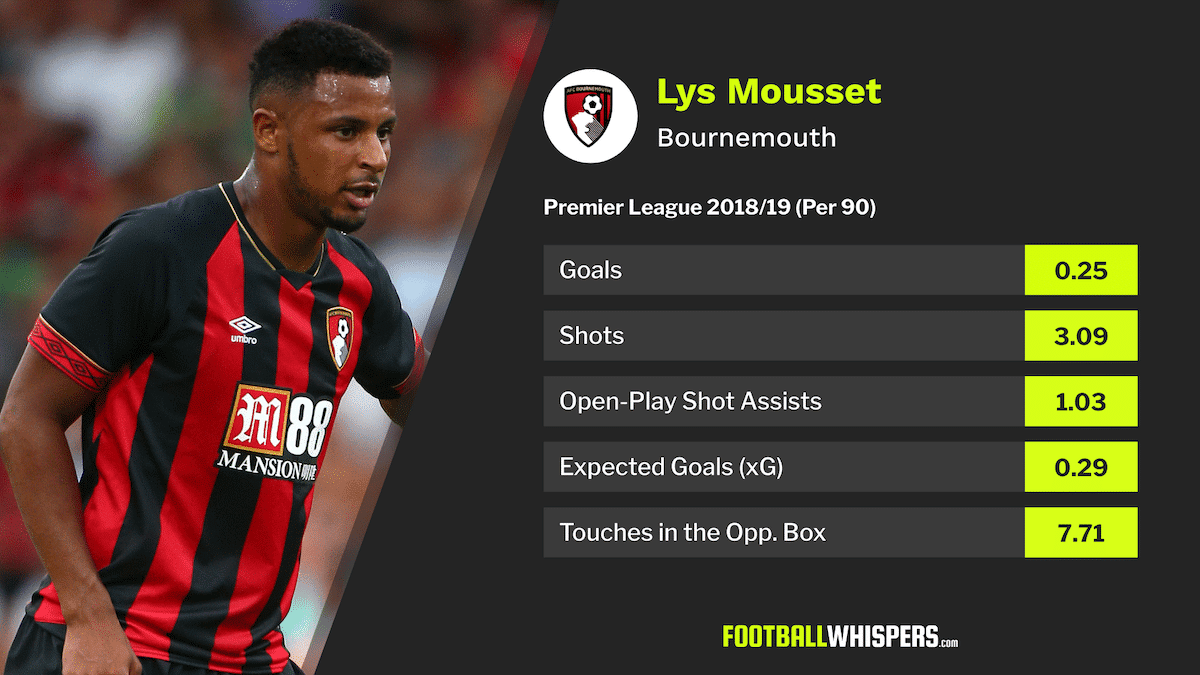 Howe has claimed that Mousset will play a “big part” in Bournemouth’s future, but it appears he might have run out of patience. The Frenchman, who has reportedly been encouraged by the progress of compatriots Moussa Dembélé and Odsonne Edouard at Celtic, could opt to join the Scottish champions should a fee be agreed.

Bournemouth might still be hopeful of keeping Mousset, who has also been linked with Fulham, but his lack of game time suggests a move is the most likely outcome.

If he does choose to make the switch to Celtic, Mousset must consider where he will fit into Neil Lennon’s team. The Northern Irish coach has predominantly played a 4-2-3-1 since taking over from Brendan Rodgers in February, opting to continue with the system set in place by his predecessor.

That is not dissimilar to Howe’s 4-4-1-1 – which has often morphed into a 4-4-2. At Celtic, Mousset would likely find himself leading the line alone, perhaps with less support. But he is well suited to such a role.

The challenge for Mousset would be to dislodge Edouard, who is amongst the Scottish Premiership’s top scorers with 15 league goals to his name this season.

Mousset is two years older than Edouard but has more to prove after three years of sporadic involvement in Bournemouth’s first team. The two forwards, though, might work well together, and Mousset’s arrival would certainly bolster Celtic’s attacking options.

It remains to be seen whether Celtic will be willing to pay the £10 million – a potential club record fee – required to bring Mousset to Glasgow.