Lyon chairman Jean-Michel Aulas is once again playing a blinder in the transfer window.

Nabil Fekir, Moussa Dembélé, Memphis Depay, Ferland Mendy and Tanguy Ndombele are all being linked with moves away from the Ligue 1 club this summer while the real Prince of the Groupama Stadium is going under the radar.

Houssem Aouar is currently in possession of the crown that once belonged to Karim Benzema, Alexandre Lacazette and Fekir.

Aulas is the mastermind behind this Kansas City Shuffle-type con. For those unfamiliar with it, it’s a plan that relies on the mark realising they’re being worked, but fail to understand what the plan actually is.

In this instance, clubs know Lyon can’t demand a high fee for Nabil Fekir and know Aulas will only allow three players to leave this summer. And while they’re all scrambling to sign one of the five players mentioned above, nobody is seemingly going out of their way to sign Aouar.

There are other Depays out there, at least in terms of playing style if not personality. There are also players who can do what Dembele does. And while Ndombele is unique in many ways, there are still alternatives to him across Europe.

Fekir is good too but there are a host of attackers who can replicate his output. It’s a similar story with Mendy. But Aouar is different.

The 20-year-old is a special talent. Despite his tender years, he’s already appeared in over 5,500 minutes in the French top flight. He has Champions League and Europa League experience. He’s still yet to be capped by France but that moment is more of a when as opposed to an if it happens.

Friend: How on earth do you pronounce Aouar?

Pep Guardiola singled him out for praise after the Premier League champions faced off against Lyon in the Champions League earlier on in the season.

“Houssem Aouar is a very good player, he is incredible. We talk a lot about Ndombele, but Aouar is also excellent. He's always very calm with the ball at his feet, with excellent technical quality.”

The former Barcelona tactician knows all about midfielders. So when he praises one, it’s wise to take note.

The Lyon No.8 oozes class. Initially, it was his build-up play which caught the eye. He's comfortable carrying the ball. He's got the vision and the ability to execute passes to disrupt defensive lines. He's progressive and incisive. 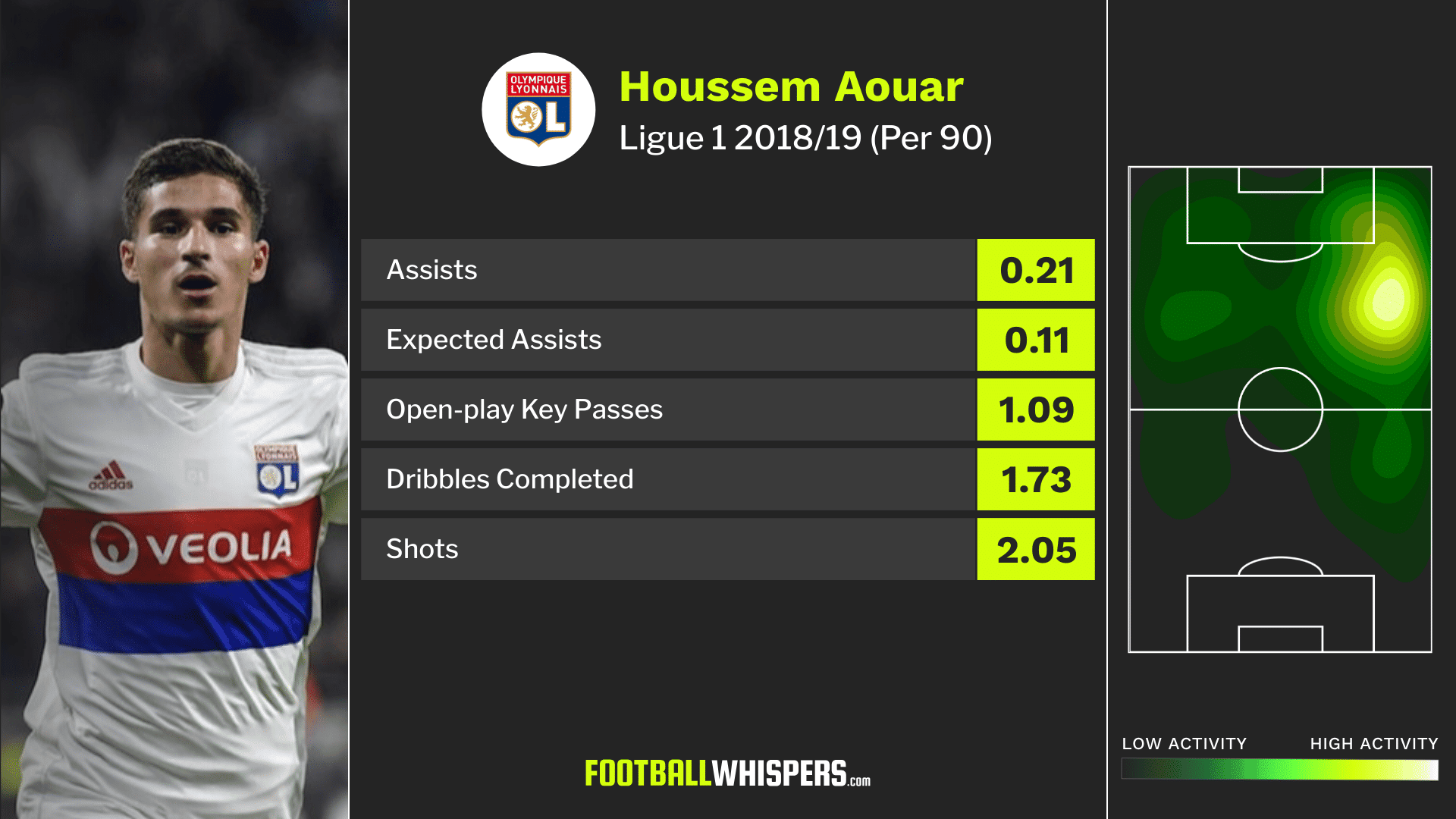 Aouar averaged 1.09 open-play key passes per 90 while completing 1.73 dribbles last season. He's not a player who relies on one trait to impact the game. He's multi-faceted and his arsenal is only going to improve with age.

The 2017/18 campaign saw him finish with six goals and five assists. A solid return for a midfielder without the aid of penalties. This year, that increased as he finished the season with 14 goal involvements in Ligue 1, split evenly between goals and assists.

What is even more remarkable is the variety of goals he scored. His final three strikes of the season showcased that.

He netted a diving header against Montpellier; sneaked into the area to fire home a left-footed effort from close range against Monaco, highlighting his predatory instincts; and calmly slotted a right-footed effort into the corner from the edge of the box against Guingamp.

Aouar is managing to impact the final third of the game all while maintaining his defensive numbers. He wins possession back 3.28 times per 90 inside the defensive third and 2.85 times in the middle third. Both figures see him ranked in the top 50 for midfielders across in Ligue 1.

He's attempting 2.57 tackles per 90 and one interception. More often than not, Ndombele is praised for his defensive work rate but the numbers show Aouar does his fair share, too.

Aulas is diverting attention the way of other players so to give Aouar at least one more season with the club. It's a wise decision on his part. After all, the 20-year-old could legitimately be Lyon's first €100million sale if he develops as expected.

The Prince of Groupama Stadium is also the club's most prized asset.