Lyon are a club used to change. Owner and chairman Jean-Michel Aulas is no stranger to cashing in on players at the peak of their powers, and yet, despite this, the Ligue 1 side are rarely in transition.

They plan well and recruit even better. Because of this, OL tend to compete near the top of the table. Over the past four seasons, their average finish in Ligue 1 has been third, all while losing Alexandre Lacazette, Corentin Tolisso, Maxime Gonalons, Emanuel Mammana, Samuel Umtiti and Mariano Díaz to name but a few.

The summer of 2019 followed this familiar path. Real Madrid raided the French side and took Ferland Mendy. Spurs parted with a club-record fee to land Tanguy Ndombele. And Nabil Fekir finally got his move away, joining La Liga side Real Betis 12 months after a move to Liverpool collapsed.

Lyon reinvested the money they received to sign Jeff Reine-Adélaïde, Joachim Andersen, Thiago Mendes, Youssef Kone and Jean Lucas. On paper, it was nothing out of the ordinary for the club.

Sylvinho was brought in to replace Bruno Génésio and Les Gones got off to a dream start under their new management team.

The opening game of the Ligue 1 season took OL to the Stade Louis II to take on Monaco. By no means a walk in the park despite their struggles last season, Lyon swept Monaco aside in what turned out to be a comfortable 3-0 victory.

They followed that up with a rampant display against Angers in Sylvinho’s first home match in charge. Houssem Aouar fired in the opener after just 11 minutes, Moussa Dembélé and Memphis Depay netted doubles, and Jean Lucas scored his first for the club in the 6-0 win.

It was the ideal beginning. 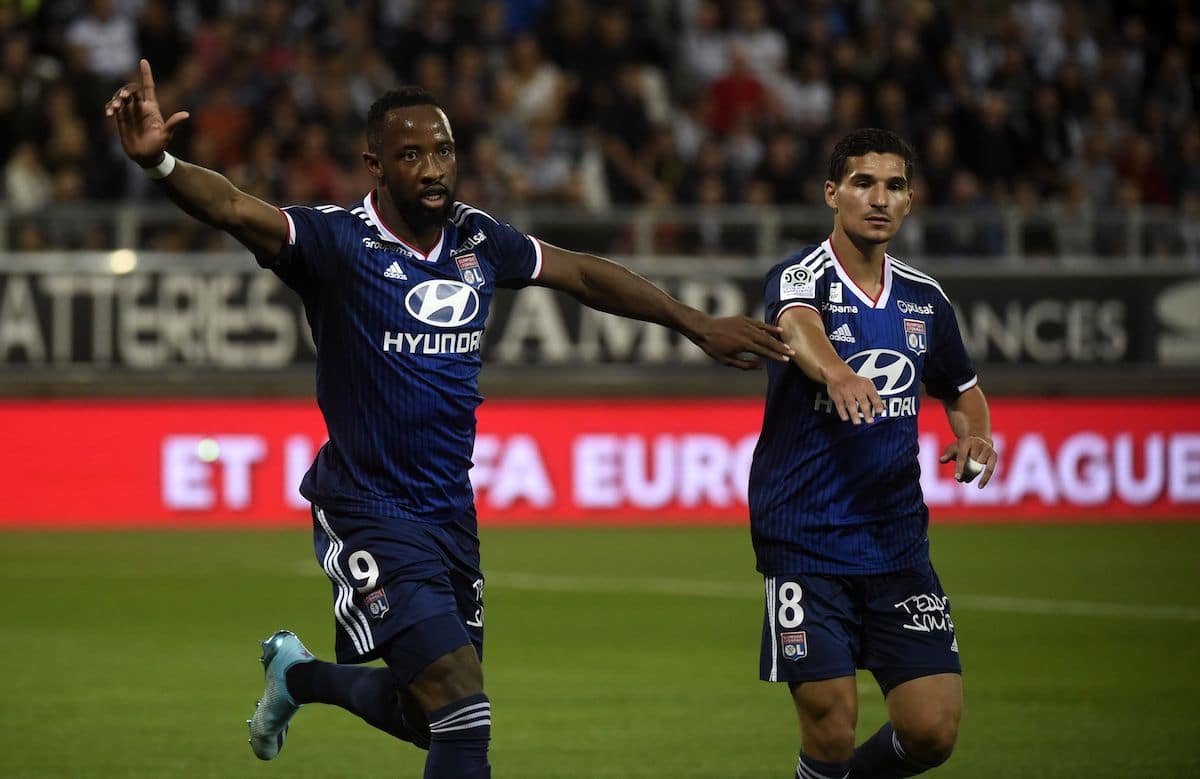 But fast forward to October and Lyon find themselves on a seven-game winless streak which includes 1-0 defeats to Montpellier, Paris Saint-Germain and surprise package Nantes.

They’re currently in 11th position in Ligue 1, nine points off the top.

The pressure is already mounting on Sylvinho but Aulas is sticking with the Brazilian tactician. He did, however, confirm he had held crisis talks with Juninho after the 1-0 defeat to Nantes.

Speaking to L’Équipe, the Lyon president was honest about the situation: “With Juninho, we worked for a long time throughout Saturday afternoon. We thought about the different things that we could put into place.

“I also spoke with Bernard Lacombe [special advisor to Aulas]. Although he has taken a backseat for a period of time I wanted his view. I also spoke with Gérard Houllier with whom I work a lot.

“Despite our latest defeat [against Nantes], we showed things that suggest we are going in the right direction. We must not forget we are still at the very beginning of the season. That’s why I found some of the criticism very harsh.

“Some believe that the situations of Juninho and Sylvinho are no longer tolerable. I do not think that’s the case. We must give ourselves the means to respond against RB Leipzig on Wednesday and St Étienne in the derby on Sunday.

“Making decisions too quickly is not a habit that this institution has. I have asked Juninho and Sylvinho to work together even more closely.”

Lyon’s struggles are peculiar. They aren’t being taken apart. They aren’t conceding a high number of chances –  their one goal against per 90 is lower than their average of 1.24 last term. They’re also attempting a similar number of passes per game to last season, as well as averaging over 50 per cent of possession, just as they did under Génésio.

The big difference is going forward. 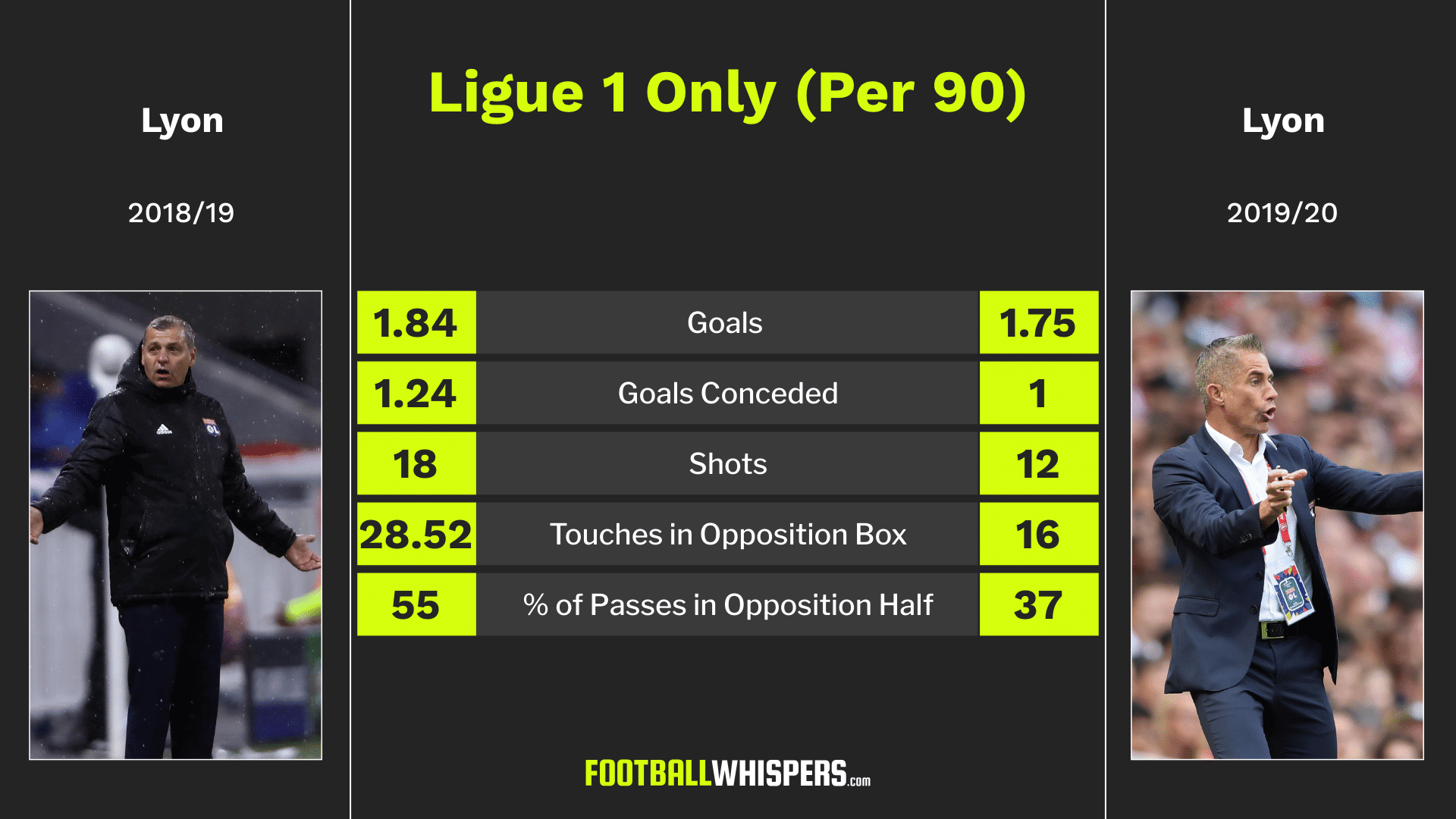 In terms of pure goals, there's not much between the two iterations of OL. Génésio's averaged 1.84 goals while Sylvinho's are averaging 1.75.

But it's when looking at the expected goals metrics you see a clear variation in the two sides.

They're currently outperforming their expected numbers due to the clinical finishing of the forwards, but it isn't sustainable. Furthermore, nine of Lyon's 14 goals this term arrived in the opening two matches. In the following six they've netted on just five occasions.

Sylvinho's side are averaging fewer shots and are taking 12 fewer touches in the opposition box per 90, too. The most alarming stat, though, is the percentage of passes played in the opposition half. Under Génésio, this was around 55 per cent but it's dropped to 37 per cent under the Brazilian coach.

Lyon are seeing just as much of the ball and are playing a similar number of passes, but their build-up play is much deeper with Sylvinho hoping to counter-attack teams.

The issue, however, is it's difficult for Lyon to sustain pressure when they're playing long balls and their attackers are isolated. For several teams, this style would be fine. But Lyon are one of the strongest sides in Ligue 1, they can't play in such a style.

It doesn't get the best out of their players. Despite their goals, Dembélé and Depay are feeding off scraps; it's something Sylvinho needs to correct this before it's too late.

Aulas isn't afraid to make big calls and if there is no improvement, the Juninho experiment could come to an abrupt end.