A 70km drive separates the town stadiums in one of the fiercest rivalries in France, and with the win, Saint-Etienne are just a single point behind OL.

Le Verts are the working-class team, an industrial city, a team for the people, and on Sunday they went back to their roots and climbed head and shoulders above their opponents. Lyon is the artistic city, and under president Jean Michel Aulas, they became one of France’s powerhouse clubs, eclipsing Sainté’s domination in the 70s and 80s.

On Sunday, they started with £16million, January transfer window signing, Memphis Depay. Whereas the home side looked to their biggest outlay this season, the £3.4million spent on bringing Bryan Dabo in from Montpellier. 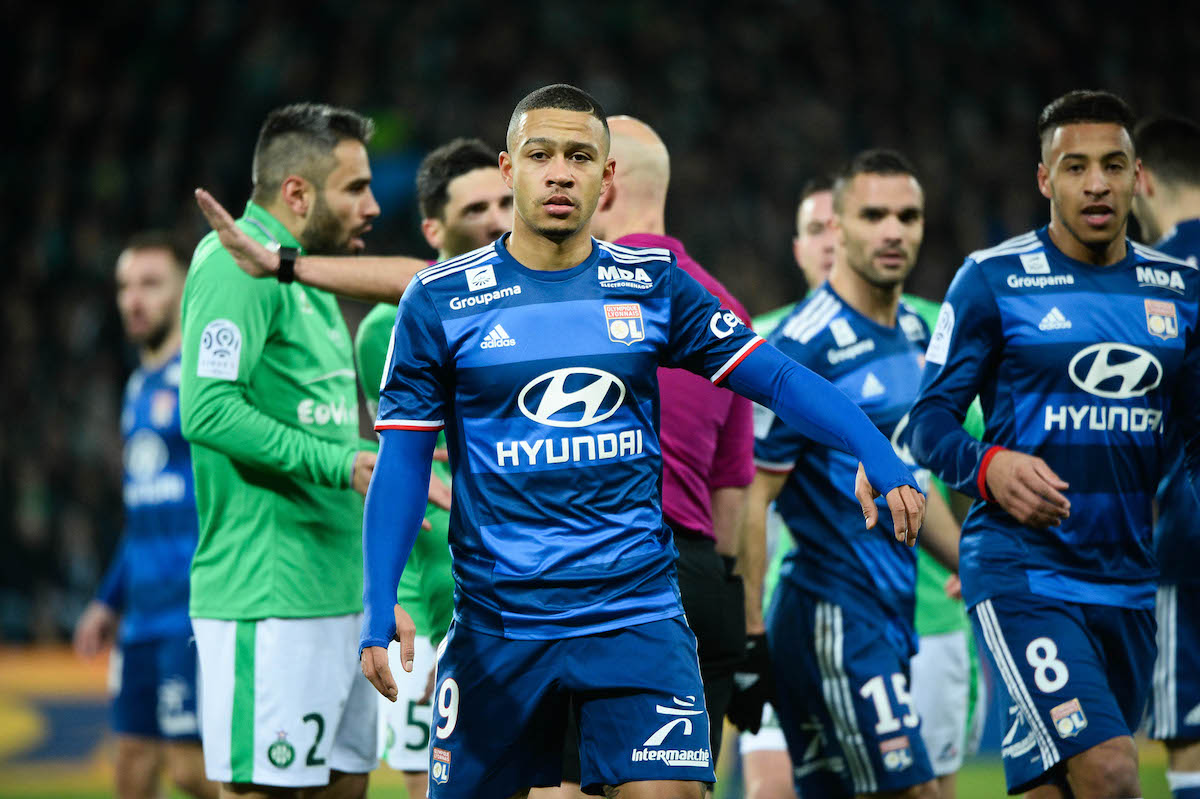 Lyon look like a team a little lost of identity at the moment and 12 points behind OGC Nice in third – the last Champions League place – they are almost left with nothing to play for this campaign.

Coach Bruno Genesio needs to go back to basics, help the club find the joy and freedom they showed last season and refocus the club, ready for the new season.

Lyon signing Depay from Manchester United was a risk. Some say it was worth taking, others believe it disrupts what they are best at – promoting youth. This tactic came back to sting Aulas in the past.

Close to a place in the Champions League final, he risked his budge on Yoan Gourcuff, Lisandro Lopez and Aly Cissokho. It didn’t work and it wasn’t until recently that OL pulled themselves out of the financial mess that gamble put them into.

This is not to say that one signing will bring those bad days back, but if it fails, it’s a step in the wrong direction.

Top striker, Alexandre Lacazette, has all but admitted he will be leaving in the summer, telling Canal Plus: “I think the right time has arrived. I think this summer is the time to change the air and see something else.”

It was always going to happen and Depay will be seen as the player that must fill Lacazette’s place. It’s early days, but the Dutch winger looks miles off the pace and the daggers are already out and pointed in his direction.

Genesio played 4-3-3 against Saint-Etienne, handing Depay the start on the left. It pushed Mathieu Valbuena to the bench, arguably one of Lyon’s best players in recent weeks, and young Maxwel Cornet even further down the pecking order. 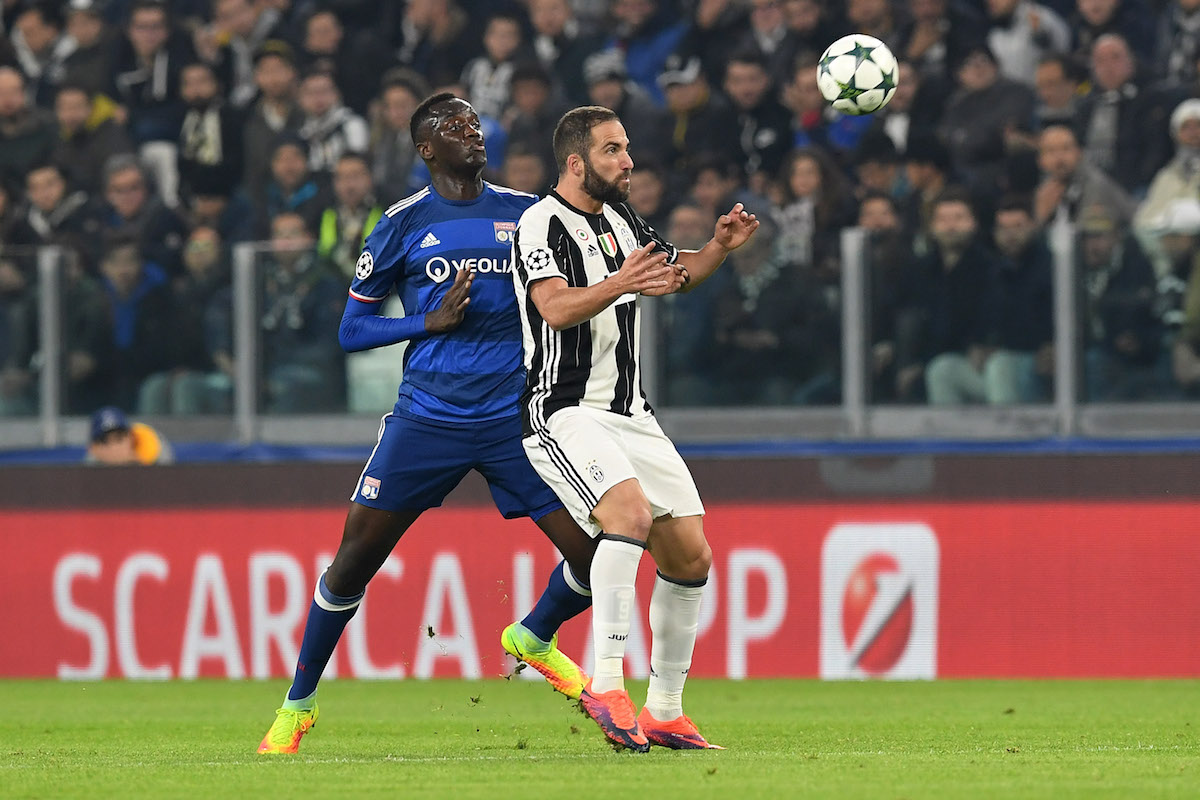 Last season, as OL built a successful season, they were able to pick a team where 80 per cent to 90 per cent of the players in the starting XI came through the Lyon youth system. They knew what it means to play for the club, what the fans expected and the pride that comes from being part of Les Gones.

On Sunday, more than half the players in Genesio’s XI were not youth products. The whole back four were brought to the club recently and the problems certainly stemmed from back to front.

Twenty-year-old central defender, Mouctar Diakhaby has missed the last few games through injury and the pairing of Emmanuel Mammana and Mapou Yanga-M’Biwa have been caught out a few times.

Defensive errors could be blamed for defeat in three of their last four games. Diakhaby represents the next generation of Lyon youth players, taking their lead from Lacazette, Nabil Fekir and Corentin Tolisso. 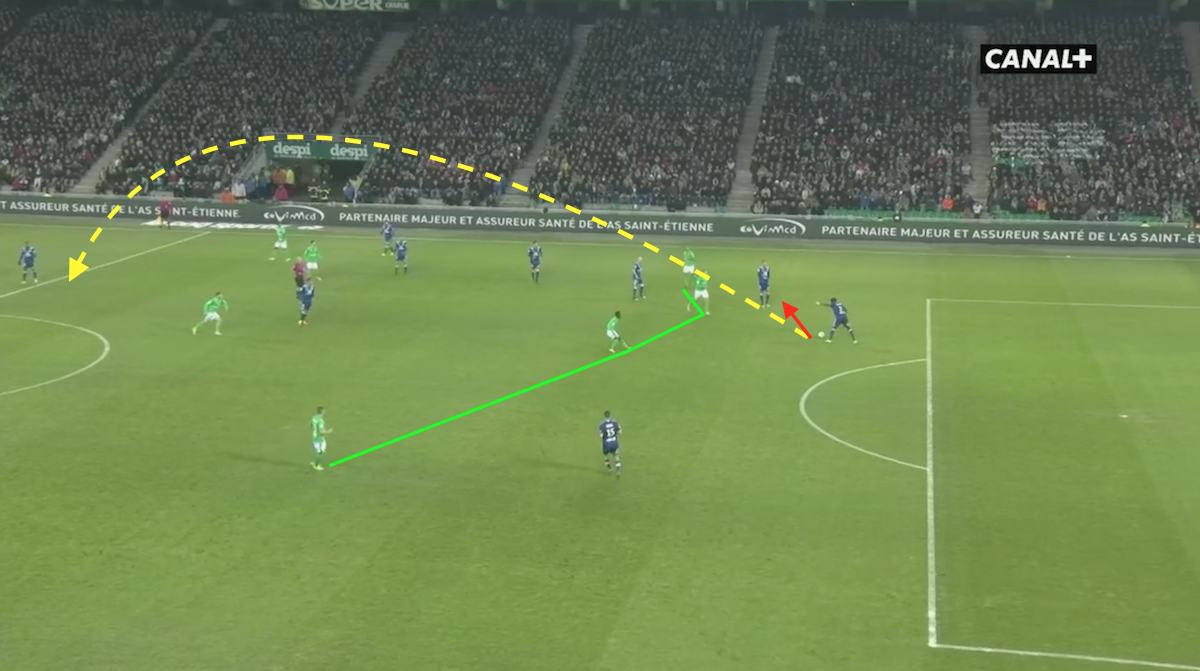 READ MORE: WILL ALEXANDRE LACAZETTE FINALLY GET HIS MOVE TO ARSENAL

Saint-Etienne, from the first minute, pressurised the Lyon defence, and this created the first goal. Giving Yanga M’Biwa nowhere to go, rather than going long – as you can see in the graphic above – he pushed the ball to the unsuspecting Mammana. The Argentine failed to control the pass and the home side pounced.

Trying to scramble, Lyon couldn’t get back into position and Kevin Monnet-Paquet fired the opening goal between Anthony Lopes’ legs. You could see just how much it meant to the home support. 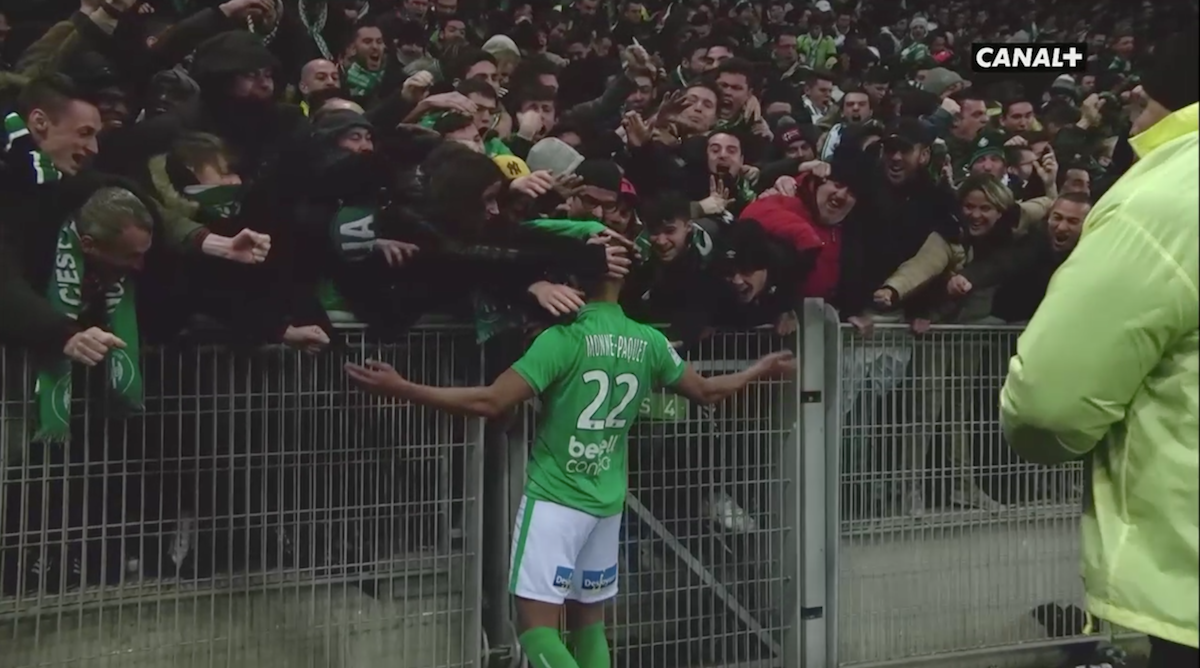 Then, not long after the first, it was 2-0 and Lyon’s defence was ripped apart by a single through ball.

Closing down Depay, they gave the Dutch winger no choice but to give the ball away and then a lovely slipped ball by Alexander Soderlund put Romain Hamouma through on goal to make it 2-0. 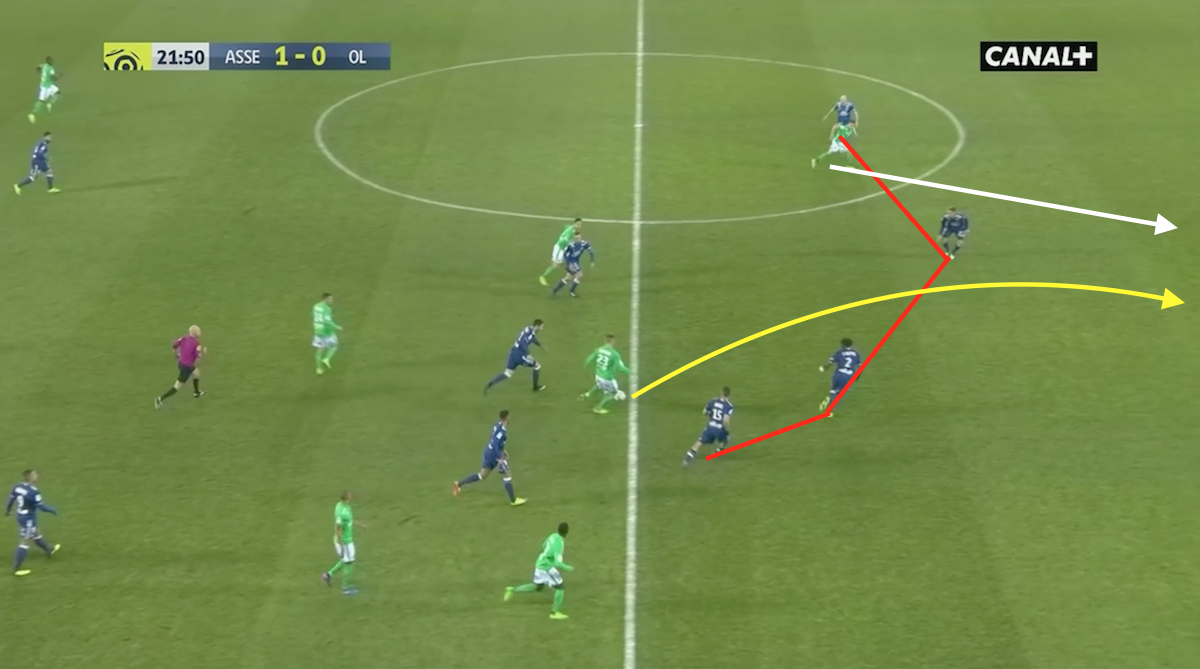 It was beautiful in its simplicity, but took full advantage of a defence that clearly isn’t quite up to scratch.

Lyon definitely showed a more aggressive side in the second half, but it came out more as frustration, rather than effort. Rachid Ghezzal was sent off for two late tackles, then Tolisso shown a straight red for a bad, studs up challenge on Fabien Lemoine.

During the match, it was almost as if, Lyon were taken aback by the effort and desire shown by the opposition. Like the away side could just turn up and force their will on Saint-Etienne. They should know better than that, derbies are never for the faint of heart.

Tactically, the 4-4-3, successful last season, only serves to accommodate Depay, but not the likes of Valbuena, Fekir and Cornet.

Genesio had played 4-4-2 at times, giving the team more width, but going back to the attacking duo of Fekir and Lacazette up front.

Most of Lyon’s best work, especially in the first-half, came when those two forwards could play little one-twos, linking up, finding space, and pulling the defence out of position. With Depay in the mix, hugging the left touchline, it doesn’t help bring them together more.

Get Lyon Back to Basics

To get this team back, and firing at the top level, Genesio has to go back to their roots. Playing the youth players whenever possible and going back to a formation that suits Lacazette and Fekir, not Depay.

Not to say the system was the only problem. Even with the 4-3-3, if the players were able to play at the high level you would expect, they wouldn’t have had the same problems. 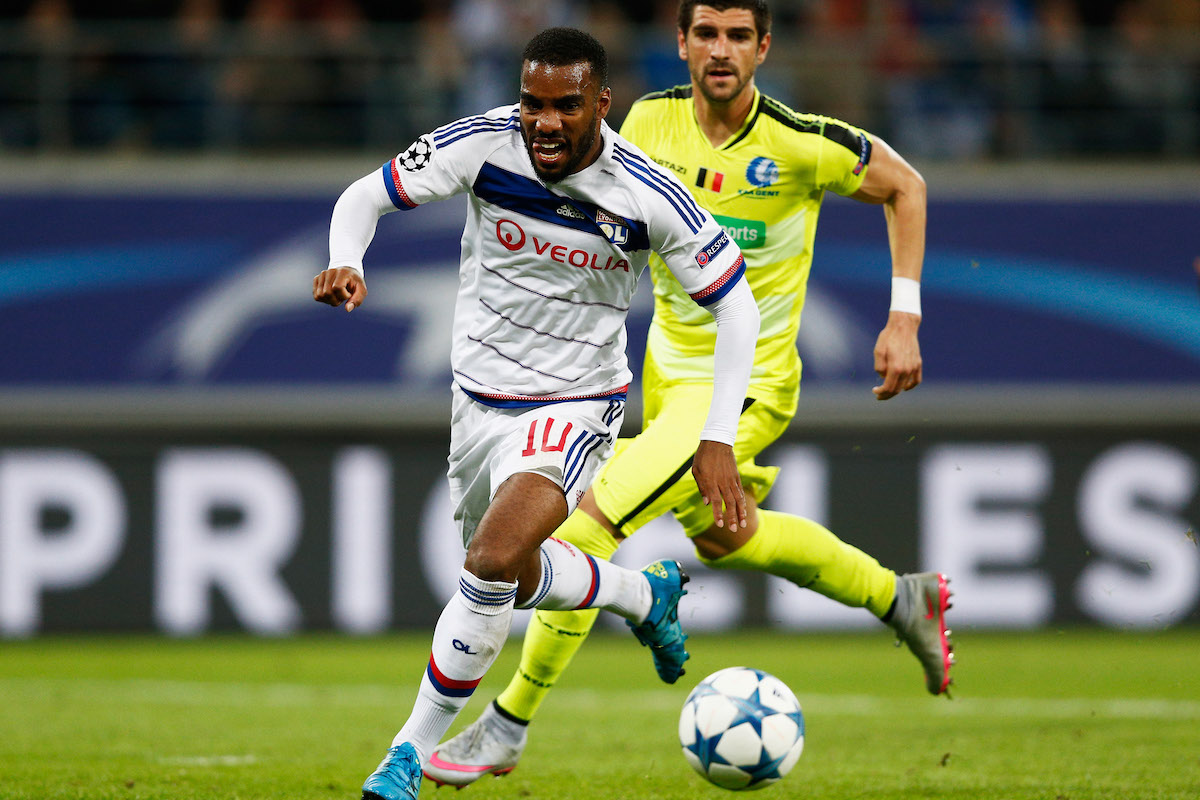 Saint-Etienne showed, that even with players of less quality, if you play the right system and have everyone on the same page, you can achieve what you want in this game. They were stronger all over the pitch than OL and most of it came with pure desire and a willingness to work hard.

Sadly, Lyon looked a long way from the side that finished in the top three last season, and it’s unlikely that will change any time soon, but if Lyon continue to slip and perhaps drop behind Saint-Etienne, then even more questions are going to be asked.

You have to go back to 1993 for the last time that Saint-Etienne finished ahead of OL in the league table. Les Verts won the battle on Sunday night, if Genesio and Lyon don’t find a way to turn this around quickly, their bitter rivals could end up winning the war too.

More memorable for his choice of tuxedos than the 13 appearances he managed in the North East, Florian Thauvin has come a long way from...

Right-back has been a problem position for Barcelona since Dani Alves left in 2017. Nélson Semedo‘s arrival the same summer was meant to make the...

Lilian Thuram was ahead of his time. He mixed impeccable technique with pace, power and aggression to become the prototype modern defender, at a time...

No-one in Serie A has scored more goals than Atalanta this season, while La Dea have thrilled in the UEFA Champions League. Yet it's defender...

Monaco has been a happy hunting ground for Premier League sides in recent years. With their reported interest in left-back Fodé Ballo-Toure, Chelsea look set...

The excitement around a 19-year-old centre-back from Saint-Étienne arriving in the Premier League has been building for a number of months, with £30million Arsenal starlet...