Scotland will look to extend their unbeaten run to five games, in order to keep their spirits high ahead of the European Championships. They face-off against a Luxembourg side that have lost five of their last seven games. Will Scotland get a morale booster ahead of their Euros opener? Find out with our Luxembourg vs Scotland match preview with free tips, predictions and odds mentioned along the way.

Scotland to sign off warm up games with a win

Luxembourg are coming off the back of two consecutive losses and have won just one of their last seven games; five of those games ended in defeat too. Scotland are hardly flying either but despite winning only one of their last six we are still making the prediction they win this game; largely because of how poor Luxembourg are and partly because the Scots are on a four game unbeaten stretch albeit including three draws. To be fair, those draws were in games where Scotland were underdog; confidence won't have been knocked. Then you have the head to head record; the last match was way back in 2012 but Scotland did win.

Our second prediction for today will be on the over/under goals market. Luxembourg have not only been unable to win games but they've also had some difficulty scoring goals. Four of Luxembourg's last five games have come in under 2.5 goals with Luxembourg failing to score in three of them. Where Scotland are concerned seven of their last ten games have gone below the 2.5 goal mark. Scotland have kept clean sheets in four of that 10 game run. Those aspects combined together scream low scoring!

A morale boosting win to nil for Scotland?

Our first prediction established that this should be a win for Scotland whilst the second of our tips set out why it will be a low scoring game. With that in mind, we're going to back Scotland to win with a clean sheet. If you need a brief recap then here goes; Luxembourg lose a lot of games, Scotland haven't been shipping many goals of late and, the clincher, Luxembourg struggle to find the net. This bet has value for sure.

Luxembourg vs Scotland: Find the best odds and more

A winnable game for Scotland to boost morale

Scotland might be on a run of just one win in six but they're also unbeaten in four having drawn away against the likes of Holland and Israel, neither of which are disgraceful results. They'll arrive in this match confident and thinking they can mix it up at the Euros. There is no debating their biggest assets though; that's the two full backs – Kieran Tierney and Andrew Robertson although Kevin Nisbet will be desperate for another chance to showcase his talents too. If they all start then Luxembourg will have their work cut out. As for what Luxembourg can bring to the game, their form is in the drain at the moment but Gerson Rodrigues does at least carry some form of threat. 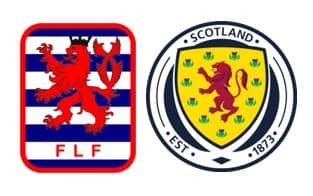