Sheffield Utd are one of just four teams that are still waiting to record three points in the Championship. Can they get that first win here? Find out with our Luton vs Sheffield Utd match preview with free tips, predictions and odds mentioned along the way.

A point a piece

As we mentioned in the opening statement, Sheffield Utd are yet to record a win in the league this season but they did bag a victory over Championship opposition in the League Cup on Tuesday. It will give them a welcome morale boost. Morale boosting results haven't been on the menu for Luton lately though; they were hammered 5-0 on their own patch last week. They've been incredibly inconsistent this season recording two wins and two losses. The reason we're backing a draw here is because we feel it will settle the Luton ship after that heavy loss whilst a point will help Sheffield Utd string positive results together for the first time since January!

It won't be a match for the neutrals

If you simply look to the number of goals their games have seen in recent weeks you wouldn't make the prediction for this game to come in under 2.5 goals. When you consider who has been scoring the goals, that somewhat changes. Luton, to be fair, have scored eight in their last five matches – an average of 1.6 per match – but Sheffield Utd have managed just four. When you consider both those factors the idea of them sharing three goals feels unlikely.

Cornick on the scoresheet again

Our predictions to this point have hardly painted a picture of the goals raining down when Luton lock horns with Sheffield Utd on Saturday but our final tip is that Harry Cornick bags himself a goal at some point in the game. The Luton man only scored one goal in 40 league games last season but already has two this season after an impressive pre-season. He's not been given many minutes on the pitch in the last couple of weeks, however, after the 5-0 embarrassment last week Nathan Jones may well ring the changes.

The best odds for Luton vs Sheffield Utd

A game full of effort but lacking quality

Luton offered up one of their worst home performances of the last couple of decades against Birmingham last week and it's vital they bounce back this week; a win isn't guaranteed and neither is a draw but you can bet your bottom dollar that Luton run harder than Sheffield Utd. As for the team news, Dan Potts might be available for selection after suffering injury in pre-season. Where Sheffield Utd are concerned, their camp should be a happier place today after beating Derby in the cup. It was a much needed victory and Billy Sharp scoring means he's bagged in back to back games. An in-form Sharp will come in very handy given goals have been hard to come by.

FAQ for Luton vs Sheffield Utd 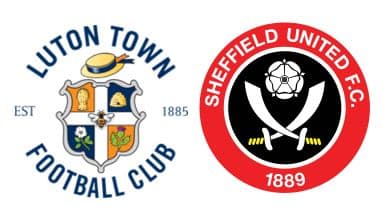