Both of these sides are gunning for a playoff spot. Who will take maximum points? Find out with our Luton vs Nottingham Forest match preview with free tips, predictions and odds mentioned along the way.

Although Luton have not enjoyed their best form recently, they haven't had much trouble finding the net; Nathan Jones' men scored in 11 of their last 12 games in all competitions. Conversely, Luton have conceded their fair share of goals; they have seen their defence breached in all of their last four games. Both teams scored in three of Luton Town's last four games. Just like Luton, Nottingham Forest have been consistent in goal scoring terms; they scored in 15 of their last 17 games. It's also worth noting that both teams scored in three of the last five clashes between these teams; for this reason, we believe that there will be goals at both ends.

Luton vs Nottingham Forest: Let's look at the predicted lineups

Both of these teams are looking good for a spot in the Championship top six but Nottingham Forest in particular are looking hot; there is a chance they could make the top two but they can't really afford to slip up.

Luton Town have had a poor run of form recently; they are coming off a loss, and have no wins in their last three games. Nathan Jones' men will go up against fourth-placed Nottingham Forest in a bid to keep their promotion playoff spot; it'll be interesting to see how they'll fare against an in-form Forest side.

Nottingham Forest have been unstoppable in recent weeks; they are coming off three consecutive wins, and have won six of their last seven games. Steve Cooper's men will visit Kenilworth Road on Friday; they will look to make it four wins from four.

A quickfire FAQ on Luton vs Nottingham Forest 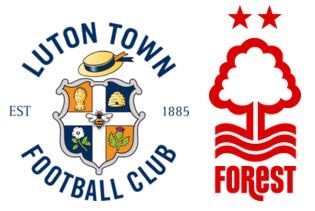