Coventry are flying high at the moment but can only boast the solitary away win. Can they make it two here? Find out with our Luton vs Coventry match preview with free tips, predictions and odds mentioned along the way.

Luton vs Coventry: Our top picks

If you focus purely on the table you'd back an away win. We're not doing that though. Luton aren't charging up the table because wins are few and far between but they don't lose many games either; they've lost just three of their past 10 and put up an almighty fight against league leaders Bournemouth at the weekend. Coventry aren't exactly a machine away from home either with one win, one draw and two defeats in their away matches. We can't separate the sides.

Not a game for goal lovers

This is very much a game where you could flip a coin on the over/under 2.5 goals market. We're backing under though despite the fact Luton have only seen two of their last five fall short of the three goal mark. There are two reasons for this. Firstly, Coventry boast a fairly low average goals per game at 2.0 with that dropping to 1.5 for away games. Then there is the head to head element to consider; the two teams faced off twice last season with just a combined two goals scored across both fixtures.

Coventry will win a half

Our final prediction is that Coventry will win at least one half. We've already mentioned that we can't separate the teams but if pushed we'd lean to an away win. After all, they have a vastly better record of chalking up wins. The Sky Blues are a force to be reckoned with on their own patch at the moment and, at some point, it may well click away too. We obviously don't fancy them to take three points here but backing them to win a half is a tidy safety net with reasonable odds.

Check out the best odds for Luton vs Coventry

Luton vs Coventry: Meet the teams

Are Luton ever going to be serious contenders in the Championship this season? No. They're more than good enough to finish in the midtable positions though – even if they are winless in six. Nathan Jones is hardly being helped by injuries though. Fingers crossed there might be a few back for this game; the most notable player being Fred Onyedinma; he's only played four league games this season but has three goal contributions. As for Coventry, they're buzzing at the moment as they sit third. That is very much due to their home form though. If they're to start upping their game away from home then they could do with Viktor Gyokeres banging goals in like he does at home; he's scored seven this season with just two coming on the road.

FAQ on Luton vs Coventry 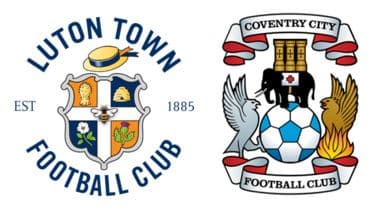