Luton will be delighted with their start to the season but Birmingham aren't going to rollover. Who will come out on top when they meet? Find out with our Luton vs Birmingham match preview with free tips, predictions and odds mentioned along the way.

Both teams would take a point

You can keep looking at the form book of these two teams but we're struggling to split them. Throw in the expectations of the respective fans and we see it ending as a draw. Luton won their second game of the season last time out whilst Birmingham lost to Bournemouth after only drawing last weekend. A point each will be seen as a good building block and prevent any noises of things slipping away. The fixture ended level last year too with none of the last five meetings having anything more than a goal between the sides.

The next tip is playing the percentages as it's far from home and hosed. Luton have broken the 2.5 mark in four of their last five games but Birmingham's last four have served up a measly four goals with each of the matches ending under the 2.5 cut off. For our money, that leaves things largely 50/50 for this game; the final check is to look at how the two teams have fared in the past; last season both matches between Luton and Birmingham ended under the 2.5 mark with a total of three goals across the two games.

This final prediction follows a very similar pattern to the previous tip in that it's about exploiting value. Luton have seen both teams score in just one of their three league games so far this season. For Birmingham, all three of their Championship encounters have ended with at least one side blanking in front of goal. When you then consider that the last meeting between these teams also didn't feature goals for both sides it starts to look really attractive. It also offers a little protection against the match result tip too in case one side edges the match.

The best odds for Luton vs Birmingham

A rather dull encounter but another point on the board

Let's be honest about it, neither of these teams are expected to win promotion so the best they can hope for is a top half finish with a flirtation of a playoff run. Luton would be delighted with that and have made a good start to their campaign. With the likes of Cameron Jerome up top, they'll always carry a threat even if their general quality is somewhat light. For Birmingham, they'll really be keen to push for that playoff chase but need to find some more quality in the final third. Can Tahith Chong grow into that player?

Pre-match Qs for Luton vs Birmingham 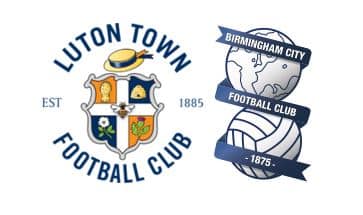