Their Premier League future remains far from certain but that, understandably, isn't stopping Crystal Palace from planning for the summer transfer window. Fail to act now and the Eagles risk being left behind should they survive.

Although the latest player linked with a move to Selhurst Park could been seen as something of a contingency. A deal which, no matter the division Palace are playing in next season, would benefit the side.

According to reports in his native Australia, Queens Park Rangers midfielder Massimo Luongo is a Crystal Palace transfer target. Championship side Aston Villa and Malaga, set to suffer relegation from La Liga, are also reportedly interested.

The former Tottenham Hotspur player has been at the heart of Ian Holloway’s side throughout the course of the season and, after scoring four goals in his last seven games, the 25-year old may be looking to make a step up from mid-table in the Championship this summer.

Palace would offer such an opportunity. Even if they were to go down many would expect the Eagles to bounce back up at the first attempt given the quality in their squad – although players would be expected to depart.

So would Luongo be an ideal signing for the Eagles? We have run the rule over the midfielder.

Who is Massimo Luongo?

Born in Sydney, Luongo played youth football with Leichhardt Tigers, a semi-professional club in the city before moving to Spurs at the age of 18. Despite being Australian, the midfielder gained an Italian passport due to his father’s heritage and managed to join the English club with relative ease.

He played for the club's under-18s and under-21s but only made one first-team appearance: an ill-fated League Cup clash against Stoke City in 2011 that went to penalties, in which Luongo’s saved shot cost his side the game.

The young player's first break came the following year when a loan move to Ipswich Town saw him pick up regular game time in the Championship. However, when Mick McCarthy took charge mid-season he opted to cancel the deal.

Luongo dropped down to League One and signed for Swindon Town on loan in March 2013. He would join permanently the following summer.

After two seasons with the Robins former Tottenham youth coach Chris Ramsey brought him and fellow academy player Ben Gladwin to QPR in May of 2015. It's at Loftus Road Luongo has developed into a competent Championship player as well as a fully-fledged international for Australia.

And despite never having played in a top flight division, he found himself on the Ballon d’Or shortlist in 2015 after being named the Asian Cup player of the tournament, in which he Australia win the competition.

A defensive-minded midfielder, Luongo thrives when tasked with breaking down opposition attacks and winning the ball for his team.

Like all great defensive midfielders, Luongo clearly has an aptitude for not only physically exerting himself in terms of tackles but also has a smart reading of the game that allows him to predict and therefore intercept passes in the middle of the pitch.

No midfielder in the Championship has averaged more than his 4.09 tackles per 90 while he also makes 1.55 interceptions.

With the ball he can play, too. His successful take-ons per 90 of 1.90 and forward passes of 22.08 are both the seventh highest totals among midfielders in the division.

Luongo has attracted attention in recent weeks because of his goalscoring, however, Palace or any interested side shouldn't expect him to be a regular source of goals from midfield.

His tally across a season, in League One or the Championship, has never exceed six and this term he has had ample opportunity, averaging 1.64 scoring attempts per 90 minutes.

He is also not a chance creator. Luongo has played just 0.05 through passes and created 0.08 chances per 90 this term. However, his key passes per 90 of 1.09 suggests he is capable of finding the stars in his side and they can then cause damage. 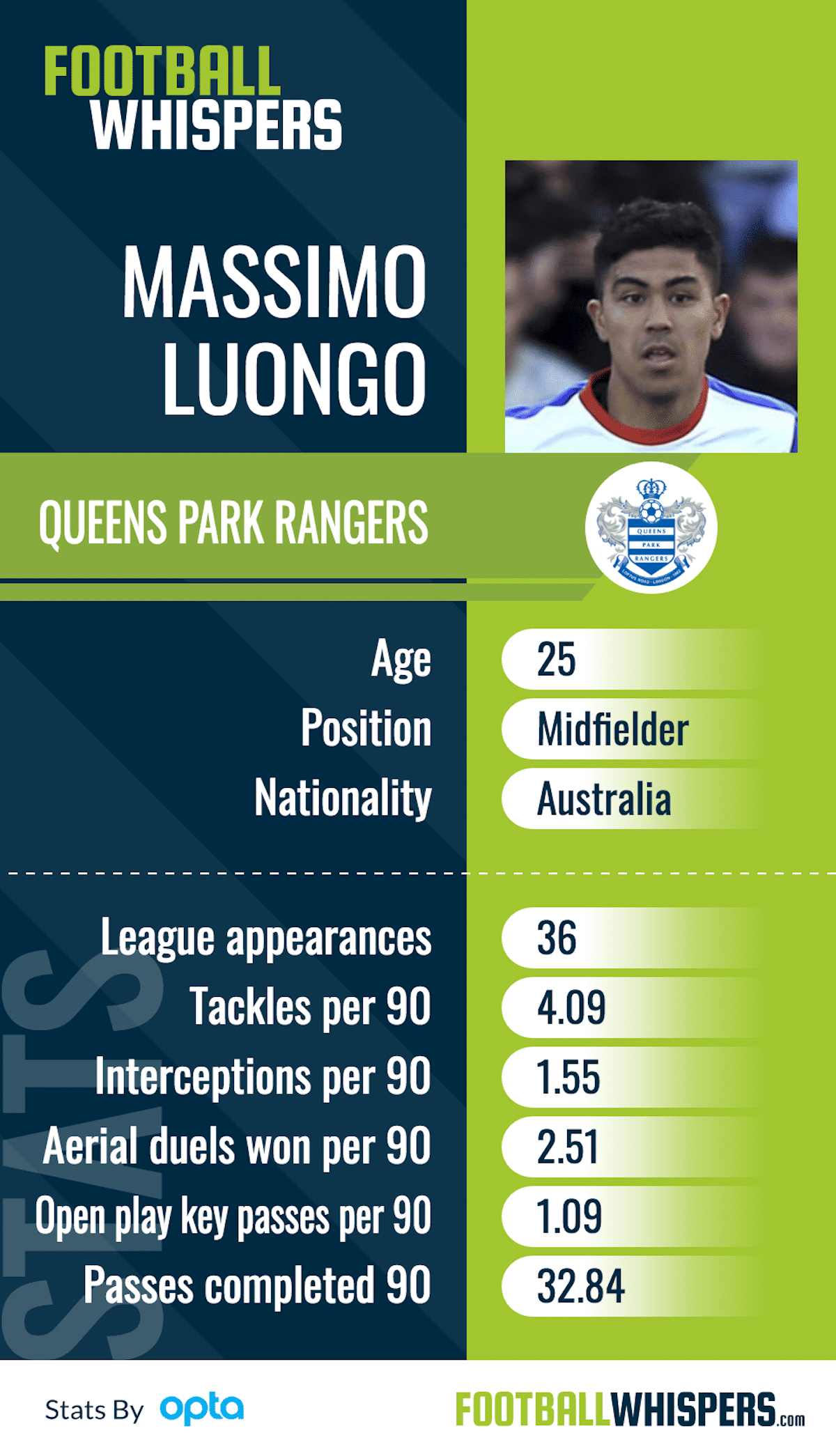 Despite Luongo’s impressive season with Rangers, any potential transfer would rely on the midfielder not only adjusting to the step up in quality required – should Palace stay up – but he would also be competing for a place against Luka Milivojevic.

The Serbian international is currently averaging 2.19 interceptions per 90 and 2.79 tackles per 90 in the Premier League this term. His proficiency from the penalty spot, from which he's scored seven times this term, is also vital to Palace.

Yet with James McArthur and Yohan Cabaye's contracts expiring this summer, and Ruben Loftus-Cheek set to return to Chelsea following his loan spell, Palace will need to bolster their midfield options.

“I have no doubt he has the capacity to play in the Premier League, and also in Europe, whether that's in Spain or Italy,” former Tottenham and QPR scout David Magrone, who spotted Luongo in Australia, said.

“When I was at Tottenham (as chief European scout) Tom Carroll, Ryan Mason, Jake Livermore and Nabil Bentaleb all broke through. Mass is just as good, if not better than all of them – and that's when he was at Tottenham.”

For the right price Luongo could prove a shrewd addition. He's improved with every step up he's taken and is now ready for a chance in the Premier League. The only question will be whether Palace will be able to offer him that opportunity.