After an excellent start to the campaign which saw them win five of their opening seven league games, drawing the other two, Leeds United’s season has taken a turn for the worse with just one win amid four defeats in the last five games.

One positive has been the new contract handed to right-back Luke Ayling, whose previous deal was due to expire in 2019. The latest negotiation sees him sign on until 2021, and it’s one less worry for the club and its fans as they nail down their regular right-back for the foreseeable future.

The cynic would say football clubs always announce new contracts when things aren’t going too well, as they attempt to appease fans with good news off the pitch when the team aren’t performing well on it. But this is a good move regardless of the timing of the announcement.

The 26-year-old has become one of the best in his position in the league since arriving from Bristol City for a fee rumoured to be around £750,000.

Many at Bristol City will now be regretting the sale as the Englishman rose to prominence for the Yorkshire club last season, becoming one of the Whites' more consistent players.

“Since joining I feel like I’ve held the right-back spot to myself and fought some really good full-backs off and hopefully I can keep doing it,” Ayling said on signing his new deal.

“In the last 18 months I feel I’ve been in the best form of my career, barring the last few games, but I’m sure I will get back to that level.”

He is confident about his ability to help the club start picking up the wins again, and the staff at Elland Road are also happy with the new contract.

“Luke has impressed on the pitch but also off the pitch too,” said director of football Victor Orta.

“He is a leader and a very good person as well, I believe that if he continues to improve the way he has in the past 18 months, then he will be a top flight footballer and I am confident we can go on that journey together.

Orta has every reason to be happy with the new contract, and he and his team will know that the right back is one of the best in his position, not just from judging him by watching his performances each week, but also by looking at the data.

Last season he was up there with the best in the league when it came to making tackles, averaging 2.8 per 90 minutes which made him the fourth-best full-back for this particular stat.

However, when it came to total tackles he topped the list with 110, and while the tackling stat might not be the most reliable piece of data around, the latter figure showed his reliability, and endurance when it comes to playing a large number of games in a long Championship season.

This type of player is vital for a league with a season which lasts 46 games, plus two cup competitions on top of that, and reliability, and more importantly availability, is one of the main things a recruitment team and a director of football such as Orta will look for in a player.

It’s no good a player boasting the best stats and best output in the world if they’re going to be picking up injuries every five minutes, or losing fitness, and Ayling has continued where he left off last season in this regard, missing just 20 minutes of his side’s involvement in all competitions so far this season.

He has played every minute of every Championship game so far this season and the stats shown below how he is making an all-round contribution to many different facets of the game. 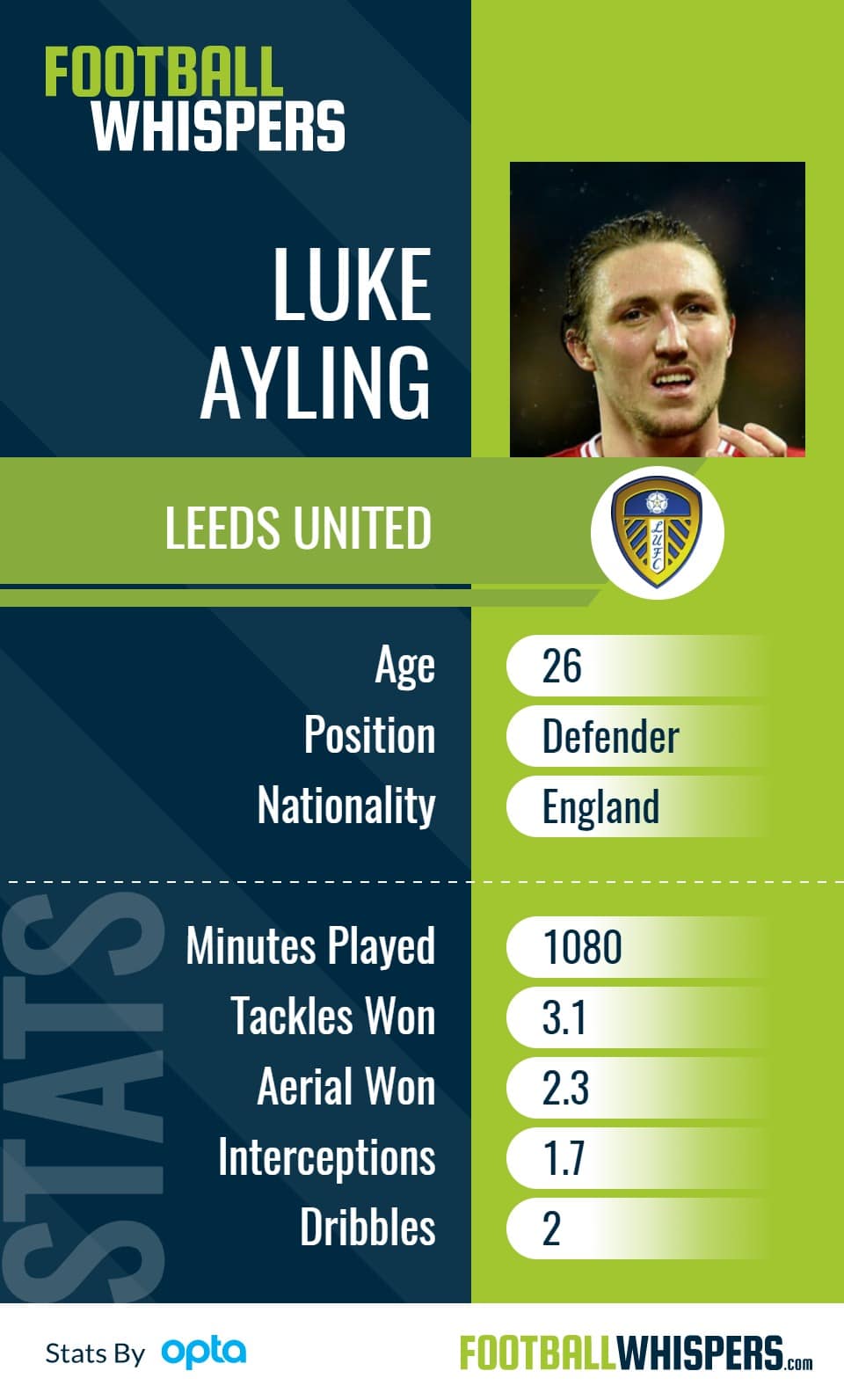 By the end of the season when more data has been collected across more games it would be worth revisiting these stats, and it would be hard to bet against him being top of the charts in certain areas as he maintains consistent performances while others drop off.

This kind of all-round ability is what good full-backs build their game on; they need to be competent on both sides of the ball, contributing in attack and defence while possessing the physical attributes to cover both ends of the pitch.

Ayling will hope his attacking output increases as the season goes on, and he can help the club push for promotion back to the top flight for the first time since 2004.

Despite their poor run of games, Leeds still sit in the play-off spots in sixth, just six points off top of the table Wolverhampton Wanderers, so bettering last season's seventh-place finish is still very much on the cards.

The club and their right back will hope that they go one further than that, and return to their rightful place in the top division. After all, if local rivals Huddersfield Town can do it, so can they.