Romelu Lukaku has always been a striker whose skillset is questioned when he isn't scoring. And currently, the Manchester United No.9 is firing blanks.

The pundits have been quick to criticise. Martin Keown called the Belgian a passenger after the Red Devils' Champions League defeat to Juventus and that is an accusation Lukaku has been dogged by since his Everton days.

During his time at Goodison the now 25-year-old split opinion. To some he was the Premier League's best. A powerful and clinical striker capable of winning matches single-handedly. Yet others felt he was overrated and lacked the requisite finesse to impress at the highest level

Lukaku’s former club visit Old Trafford this weekend. So it makes for a timely opportunity to look at what’s going wrong for the Everton hero at United this season.

According to Lukaku himself, he still isn’t quite clicking with his United teammates.

“I’ve been playing for ten years, since I was 16, with Belgium. Players know me much more,” he said recently. “Here [at United] I still think the teamwork between myself and my teammates can improve and be much better. It’s something that we’re working.

“The players need to know me and know my movement. When that starts clicking I think the results I have with Belgium will also come here.”

Given Lukaku’s much-maligned first touch which, while not as bad as the mockery would make you think, still isn’t exactly silky, the need to have teammates on the same wavelength isn’t surprising.

Outside of goalscoring, his best form at Everton came when he had advanced midfielders close by who he could lay the ball off to.

These players knew his movements and knew where he'd likely play a pass, so could position themselves accordingly.

Last season, there was often a teammate in close proximity to Lukaku, with Jesse Lingard and Juan Mata operating in the area just behind or around him.

This term, with Anthony Martial and Marcus Rashford both being deployed as wide forwards, these close connections have gone. But tellingly so has the main source of his goals. 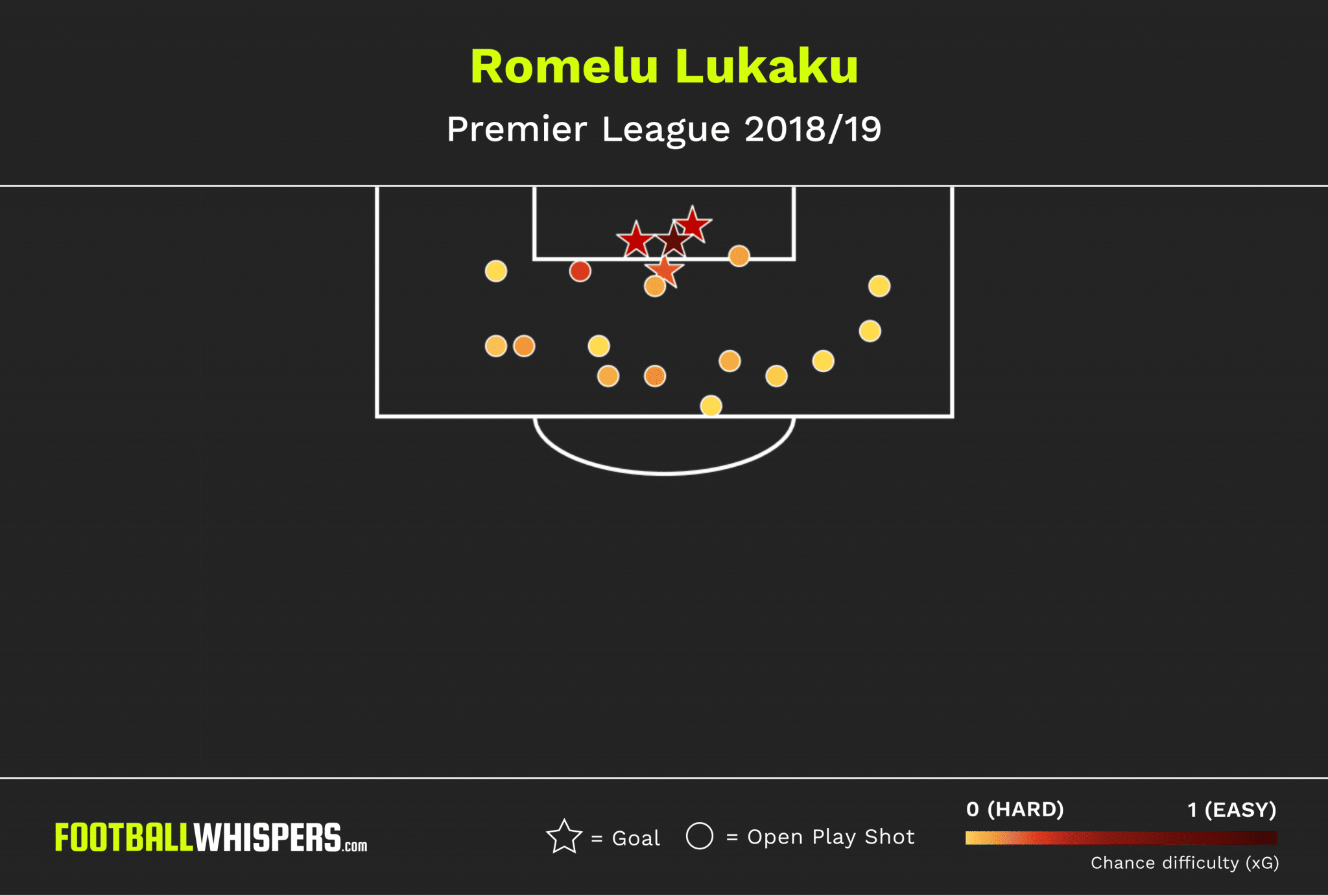 Watch several of the striker's goals during his time at Everton and a pattern will emerge.

Everton win the ball with Lukaku positioned between two defenders. He immediately points to the space behind the defence and gets moving. A through ball is played, the Belgian races on to it and then is one-on-one with the goalkeeper. More often than not he finished coolly.

Lukaku hasn’t scored many of this type of goal for United, either because he hasn’t had attacking midfielders close enough to him or because teams usually defend more deeply against the Red Devils than they did against the Toffees.

Since his loan to West Bromwich Albion when he was still a teenager, Lukaku has always been a one-in-two, or better, striker (barring a blip in 2014-15 when he only scored 0.31 goals per 90 minutes).

In the league this season, he still is despite not having struck in four matches. His four league goals in 743 league minutes is a record of 0.48 goals per 90 minutes. Unfortunately, his good performances were concentrated in early September and mask his true output.

Lukaku has only taken three shots from open-play in the four league matches he’s played since scoring against Watford. The quality of the three efforts isn’t even worth half an expected goal (0.42, to be more exact). Rashford bettered that in the match against Newcastle United alone.

Lukaku’s stats stayed pretty similar between his final season at Everton and his first at Old Trafford. Slightly fewer shots but ones of slightly better quality meant that his expected goals per 90 value went from 0.47 to 0.49.

This season they’ve dropped hugely. If we take the outlier against Burnley out of the equation he is recording 1.57 shots from open-play per 90, down from around three in each of his past two seasons. His expected goals value is just 0.25 per 90 minutes.

So perhaps Mata’s appearance against Chelsea as a No.10 wasn’t just about restricting Jorginho. Perhaps it was about helping Lukaku as well.

If José Mourinho sticks with that structure, the Belgian will be hoping that it pays off against his former club on Sunday.