After being passed and dribbled into near extinction by the advent of the fashionable attacking midfielder, the role of the pure goalscoring striker is quietly starting to make a comeback.

The idea of a central forward whose primary and secondary role is to put the ball in the back of the net was thought to be a dying art with tactical flexibility believed to be the way forward as the Messi-Ronaldo era has developed a desire for attackers to do a bit of everything.

But across Europe’s top five leagues, where Robert Lewandowski of Bayern Munich, PSG’s Edinson Cavani, Gonzalo Higuaín at Napoli and Juventus and Radamel Falcao were once the only standard-bearers (and all now in their 30s), a young crop of traditional penalty-box strikers have emerged.

Internazionale’s Mauro Icardi being the obvious example, but also Harry Kane at Tottenham, as a distinct British version. While this season Serie A has witnessed the remarkable start enjoyed by Genoa and Poland’s Krzysztof Piątek, Milan have a gem in Patrick Cutrone, André Silva is finding his feet at Sevilla and in the Bundesliga it’s Luka Jović of Eintracht Frankfurt who’s picked up the baton.

The Serbia international is in the second season of his loan from Benfica and has already exceeded his goal haul for 2017/18 with nine goals in as many Bundesliga games, including a remarkable five-goal haul against Fortuna Düsseldorf.

In a year where he also earned his first Serbia cap and travelled to the World Cup as part of the national squad, the 20-year-old is very much a striker on the rise who, as Eintracht board member Fredi Bobic admits has attracted representatives of Europe’s very best to watch him.

Barcelona, Bayern Munich and  Liverpool are three who have reportedly declared an interest as we run the role over Jović, assessing his strengths, weaknesses and transfer suitability looking head.

Who is Luka Jović?

Born in Bosnia and Herzegovina, Jović was signed as a trainee by Serbian giants Red Star Belgrade after impressing in a youth-team tournament when he was just eight. Despite interest from city rivals Partizan, he elected to play for Red Star.

He progressed through the ranks, earning comparisons with Darko Pančev – one of the club’s greatest ever having won the European Golden Boot in 1991 as Red Star lifted the European Cup.

Earmarked as a future talent, he further confirmed that by breaking a long-standing record held by another club legend in Dejan Stanković.

Making his debut aged 16 years and 156 days, he scored against Novi Sad on May 28, 2014, only five minutes after coming on the field as a second-half substitute to become Red Star’s youngest ever competitive goalscorer.

Having already been capped at Under-17 level, that summer saw him compete at the Under-19 European Championships alongside another Serb who appears destined for the top of the game in Sergej Milinkovic-Savić.

Serbia reached the semi-finals in Hungary and the following season he became a regular fixture in the Red Star side scoring six goals in 24 games in all competitions.

He signed a three-year deal in Belgrade in the summer of 2015 but Red Star would only have him for another six months as he was snapped up by Benfica in February 2016.

However, his progression in Lisbon stalled where he failed to make a first-team breakthrough, mainly turning out for the reserve side before Frankfurt, coached by now Bayern boss Niko Kovać, took him to Germany in the summer of 2017.

His first season in the Bundesliga was a positive one as he finished with nine goals in 27 games, including the winner in the DFB Pokal semi-final against Schalke, with Kovac drawing comparisons with Croatian legend Davor Šuker.

But in 2018/19 he’s raised the bar even further with his finishing and all-round importance to Frankfurt.

Jović has an excellent first touch and just an overall presence inside the penalty box. He ranks second among Bundesliga attackers for scoring attempts per 90 with 4.82 and fifth for touches in the opposition area on 7.39, which emphasises just what a menace he is for defenders.

His shooting accuracy is a solid 50 per cent and the fact his xG per 90 is 0.38 yet he’s averaging 1.4 goals every 90 minutes, indicates a finisher of genuine quality.

Indeed, his goals this season have a certain theme in their execution: finding space around the penalty spot, with Frankfurt attacking in transition, and then scoring via either one or two touchers.

With the exception of his first against Fortuna Düsseldorf – a Zlatan Ibrahimović-like acrobatic leap and back-heeled volley – all are the sort of goals that are followed by a nodding respect in how well they are taken, rather than being spectacular strikes.

And that is Jović down to a tee. He appears an exceptional efficient striker. Sparing in his involvement in the play outside the box – just 19.6 passes per 90 – once the ball is in the final third, is when he switched on finding his space and angles, capable of scoring with both right and left foot.

He does possess very good acceleration, both in pressing defenders off the ball, and in his willingness to make runs in behind. And although he’s not the talent at 5ft 9ins, his 2.89 aerial duels won is a solid enough figure to show he does compete in the air.

Ultimately, Jović is a striker’s striker. Quick and instinctive with an excellent appreciation of space and inert knowledge of where the goal is.

Essentially the flipside of what he’s good at: you’re unlikely to see him dropping deep as a passing option or linking possession regularly. Jović wants to be the last man to touch the ball in a move.

He’s producing just 0.92 open play key passes per 90 which isn’t dreadful but is bad enough to be 62nd among Bundesliga attackers – he is for taking goals, rather than making them.

He fits into the Frankfurt system so well because they play a lot of high-intensity transitional football. They rank 15th for passes per 90 (287.18) and shots (11.09) in the Bundesliga but first for ball recoveries (66.45) and second for shots from fast breaks (0.63).

Adi Hütter’s method at Frankfurt isn’t patient or methodical, it’s about winning the ball back and storming forward. That fits in perfectly with Jović best attributes, it’s blink and you’ll miss it football, which is likely why he’s flourishing as opposed to his frustration at Benfica.

Although he does press, his actual defensive contribution is fairly negligible with just 0.48 tackles per 90, 0.16 interceptions and he’s not a striker who does much work the other side of the halfway line. 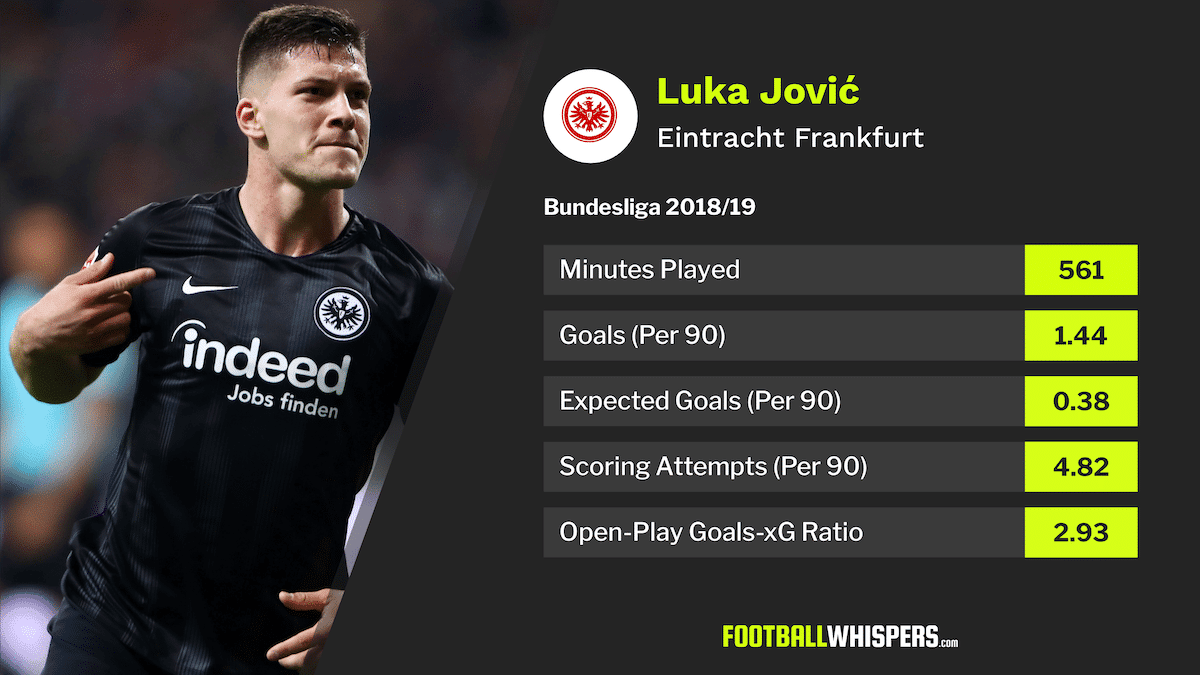 There is considerable interest but while pure goalscorers are fashionable again, Jović’s limitations, or at least the ones on show at Frankfurt, do slightly limit his likely destinations.

His lack of involvement in the overall build-up doesn’t lend him to a Barcelona, Manchester City, Chelsea or any team who values possession and players who contribute more than their designated roles.

Kovać’s presence at Bayern is an obvious signpost but, then again, the Croatian’s position is uncertain, with the board surely reticent to afford too much financial faith in the head coach just yet.

Liverpool is a potential fit, given Jürgen Klopp’s brand of football is echoed by Hütter at Frankfurt, but the Reds manager still wants more than just goals from his strikers. It’s the prime reason why Daniel Sturridge has struggled for game time.

Which means maybe, for now, the best solution is for Jović to stay put. Frankfurt reportedly can activate a clause making his move permanent for just €12.5million, which looks a sensible piece of business for them, and the player himself.