When it comes to spending big money on strikers, Chelsea don't exactly have a great track record.

There was the £10million wasted on Chris Sutton back in 1999. The £30mllion spent on Andriy Shevchenko in 2006. The £50million to sign Fernando Torres from Liverpool in 2011. And more recently, the £60million to bring Álvaro Morata to Stamford Bridge from Real Madrid in 2017.

Of course, in the past 15 years, Didier Drogba was bought in from Marseille for £24million  and the snarling but brilliant Diego Costa joined from Atlético Madrid for around £35million. But those two were exceptions rather than the rule.

Gonzalo Higuaín is the current Chelsea No.9. Loaned from Juventus in January, it was hoped the Argentine would be the cure-all solution for Maurizio Sarri. An elite striker who would transform the Blues.

It hasn't worked out, though. The 31-year-old has struck just three goals – against Huddersfield Town and Fulham – and has struggled with the physicality of the Premier League.

Given his age and lack of impact at Stamford Bridge, it's highly unlikely Chelsea will attempt to make Higuaín's loan move permanent. And with Olivier Giroud out of contract at the end of the season, the Blues will need to enter the transfer market – assuming they can while their transfer ban appeal is heard – this summer.

Which brings us to Luka Jović. The Serbia international has blossomed into one of Europe's finest strikers this season. He has struck 16 goals in the Bundesliga for Eintracht Frankfurt and is being courted by several of Europe's top clubs, including Bayern Munich, Real Madrid and Barcelona.

Sides in England have also taken note of Jović's displays but, according to Spanish outlet Marca, it's Chelsea who offer the biggest threat to Barcelona, who lead the race for the 21-year-old.

Jović certainly wouldn't come cheap. The latest report claims a fee of around £70million will be required to prise him away from the German club. And given their history, Chelsea may feel such a fee is a risk for a striker with only one prolific season to his name.

However, delve into Jović's underlying numbers and what becomes clear is he isn't simply riding the crest of an unsustainable wave. 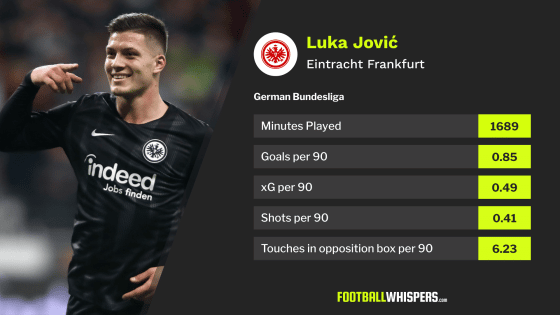 Yet his post-shot expected goals per 90 – a metric which measures how much a player adds to their chance quality through their shot placement – stands at 0.6, the seventh highest figure in the German top flight.

So while Jović is making his efforts on goal more dangerous through his finishing ability, Higuaín is reducing the threat of his shots. To those who watch the Blues on a weekly basis, it will not come as much of a surprise.

And it's not only goalscoring in which Jović outperforms the Chelsea striker. He also completes more dribbles, creates more big chances, wins possession in the final third more often, and wins more aerial duels.

It's clear Higuaín is in the twilight of his career. One which has seen the Argentine win many titles and score hundreds of goals. Yet he is yesterday's man and Chelsea can't afford to be stuck with an ageing star.

Jović's career at the top level, meanwhile, is only just getting started. He wouldn't come cheap but he would be an excellent addition for Chelsea, a striker which their attack could be built around for years to come.