For someone who’s known as one of the best footballers in Europe, Luis Suárez is enduring something of a dry spell.

There have been periods where he’s been prolific – six goals and three assists in mid-October to early November; five goals and an assist in the five games straddling the winter break.

Looking at the chances he’s getting in his matches, he’s even more up and down than his goal output suggests. Suárez has frequently vacillated between getting chances worth a lot of expected goals and then the exact opposite in the league.

Worryingly, though, he’s gone through a spell of stringing several of these poor performances together. Real Valladolid, where he came on for half an hour with Barcelona dominating but struggling to break through, provided an uptick. 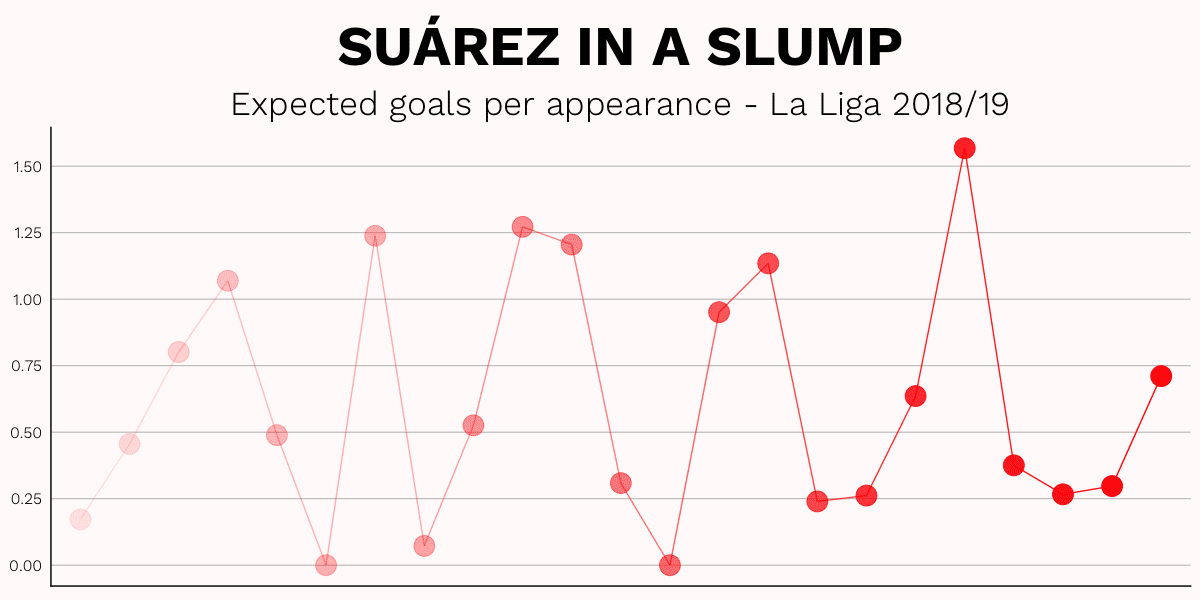 Playing for Barça – and just alongside Lionel Messi – is a great bonus to a striker, though. His 0.65 expected goals per 90 minutes from open-play is the best rate in La Liga.

Now 32, his birthday in January, you might expect him to be slowing down. His defensive numbers haven’t dropped off, but were never high at Barcelona, nor have his shot numbers or take-ons plummeted significantly either.

But, watching him, there often seems to be a sluggishness about Suárez, and he’s only scored twice in his last 23 appearances in the Champions League.

One statistical category that has seen a notable drop is the number of times he’s caught offside. Until this season, Suárez, since arriving at Barcelona, was caught offside 1.7 times per game on average. But this season it’s down to just 0.9, and he’s seen a similar fall in the Champions League.

In a younger player, we’d chalk this up to maturity, a sign that they were learning when to time their runs. For a player that is into their 30s and appears a little less trim than his team-mates, it looks like a forward who doesn’t have the legs for those runs anymore.

This isn’t surprising — Suárez has played an extraordinary amount of games during his career.

Although the numbers for this are a little sketchy, the forward has made almost 600 senior appearances at club level and a further 106 for Uruguay. He’s never had a season where he’s made fewer than 34 appearances, starting back when he was 18 at Nacional in Uruguay.

Wayne Rooney, a striker with a similar scrappiness and build, had made 636 club appearances when he left Manchester United for Everton. Thirty-two — and a young one at that — might not sound old, but it’s no surprise that Suárez is slowing down. He has a lot of miles in his legs.

While Suárez is still getting goalscoring chances at the moment, that could change quickly. His chance creation has already taken a hit. After 0.32 and 0.34 seasons for expected goals assisted per 90 minutes these past two years, 2018/19 has him at just 0.18 per 90.

It’s strange. When Barça bought Neymar, it felt like MSN would continue the club’s dominance for years to come. But first came the Brazilian’s departure for Paris Saint-Germain and now has come the spectre of Father Time to ravage Suárez’s performances. Only Messi stays standing unscathed… for now.