West Ham United’s striking issues over the past decade have been well documented. From respected internationals such as Italy’s Simone Zaza to relative unknowns such as Wellington Paulista, countless players have tried and failed to fill the club’s goalscoring void. And, while this season Slaven Bilic’s side are in the top half of the Premier League table in terms of goals scored, they still don’t possess a convincing centre-forward option.

Bilic’s choices have been reduced by the loaning out of Enner Valencia to Everton and 19-year-old Toni Martinez to Oxford United. As a consequence, he has had to pick one out of Andy Carroll, Diafra Sakho, Jonathan Calleri and Ashley Fletcher to lead the line. Generally, he has plumped for Carroll, though with the aerially dominant 28-year-old struggling with injuries, winger Michail Antonio has, on occasion, been converted to the role of striker on a temporary basis.

When he has been fit, Carroll has played reasonably well. In 14 Premier League appearances he has found the net six times, while he has also acted as an effective central focal point for direct balls and crosses from the multitude of creative attacking midfielders and full-backs on West Ham’s books. However, with his aforementioned fitness problems and recent rumours linking him with a move to China, he doesn’t offer certainty.

Thus, it is with no surprise that the Hammers’ potential summer transfer dealings are set to revolve around the pursuit of at least one quality striker. Many names have been mentioned, including those of Liverpool’s Daniel Sturridge, Chelsea’s Michy Batshuayi and AC Milan’s Carlos Bacca. However, when it comes to form and raw talent, it is arguable that none of the above trio are on the same level as Sampdoria’s Luis Muriel.

The Daily Mirror recently reported that Muriel, whose contract includes a £24million buy-out clause, is one of West Ham’s primary targets. And, were they to sign the Colombian, there scoring concerns would undoubtedly be eased.

Udinese have an outstanding track record when it comes to unearthing and developing prospects. In recent years, Samir Handanovic, Mehdi Benatia, Juan Cuadrado, Piotr Zielinski, Kwadwo Asamoah, Allan and Alexis Sanchez have been signed, nurtured and sold by the Zebrette. Muriel also belongs to this list, though his career has not taken the same dramatic upward curve of others scouted by the Udine outfit.

At the age of 19, the striker had hit nine goals in 10 appearances for Deportivo Cali in his home country’s top tier. That remarkable form alerted Udinese, who signed him in June 2010 before loaning him out to Spanish club Granada and fellow Serie A side Lecce. In his debut campaign in Italian football, Muriel hit seven goals and impressed despite Lecce’s eventual relegation, upon which he returned to Udinese and immediately showed his quality.

His debut season in black and white produced 11 goals and three assists in 22 appearances, only 15 of which were starts. For his efforts, he, along with Stephan El Shaarawy, won the Serie A Best Young Revelation award at 2012’s Gran Gala del Calcio.

From there is seemed inevitable that Muriel would depart with several big clubs hovering, but the following 18 months were deeply underwhelming. His weight and attitude seemed to hold him back, and his form deserted him. His manager at the time, Francesco Guidolin, publicly lambasted the striker over these issues in 2012. “First of all I must say that Muriel needs to lose weight, at least five kilograms before speaking with me,” the former Swansea boss said. “He must discover the silhouette of an athlete. To be at the top…you must have the physique and you must work hard.”

Eventually, having failed to live up to immense expectations, Muriel left for Sampdoria in a €12 million deal in January 2015. But, after an up-and-down start to life in Genova, the 25-year-old appears to be rediscovering his best form. 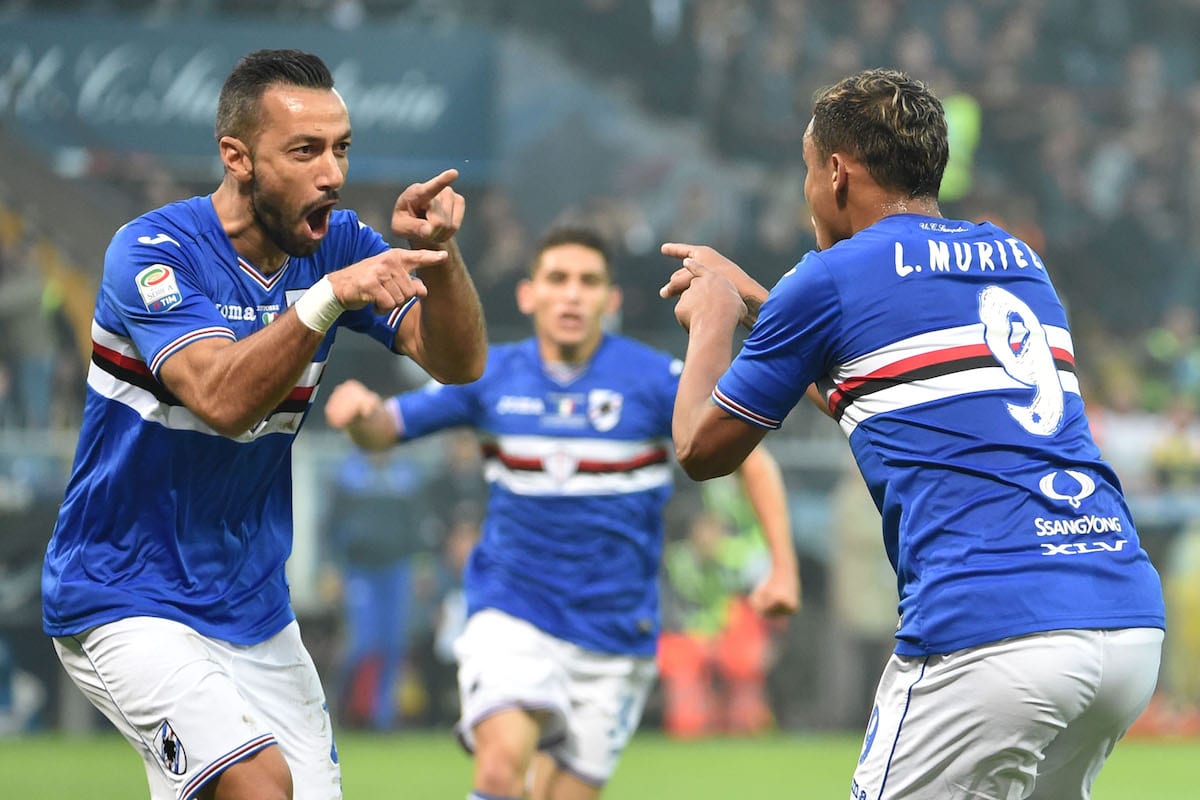 In 28 Serie A appearances this season, he has scored ten and assisted five goals. All in all, he has been directly involved for just over 42 per cent of Sampdoria’s league goals tally. Often playing on the left of a strike duet alongside Fabio Quagliarella, his movement, speed and skill have been used to devastating effect, while he has also come up with some crucial finishes.

Muriel’s latest strike, for instance, came in the Derby della Lanterna with fierce city rivals Genoa. On 71 minutes, with the score tied at 0-0, he seized on a poor pass from an opposition midfielder, made his way into the penalty area and dispatched a composed, accurate finis beyond goalkeeper Eugenio Lamanna to seal victory for Sampdoria.

And, since that goal, the striker has discussed his future with the press. “My first personal objective is to beat my record of 11 Serie A goals,” he told Radio Magica. “I’m happy at Sampdoria, because we’ve won two league derbies for the first time in 57 years. But I’ve had several offers from Juventus, Inter, Milan and Roma in Italy, [as well as] from abroad, in Spain and England.”

Would Luis Muriel suit the Hammers?

EMERGING WHISPER: Luis Muriel to #WHUFC. The #Sampdoria striker is at 3.4 to join the Hammers on our index.https://t.co/jrFSewUPc6 pic.twitter.com/uVvkJU1Bf0

Bilic’s tactics would suit Muriel, primarily because the West Ham boss has a fairly laissez-faire philosophy that allows the whimsical and the audacious to thrive. Dimitri Payet was the most prominent beneficiary of Bilic’s style and, with his combination of explosive acceleration, exceptional footwork and refined finishing, Muriel could relish the freedom of playing atop West Ham’s 4-2-3-1.

Comparisons to the Brazilian Ronaldo aren’t solely due to Muriel’s tendency to gain weight. He has a similarly eye-catching style of play, bundling beyond defenders thanks to his athletic and technical gifts. In one-on-one situations, the Colombian is almost impossible to dispossess, and he provides a scoring threat in every moment he is on the pitch. 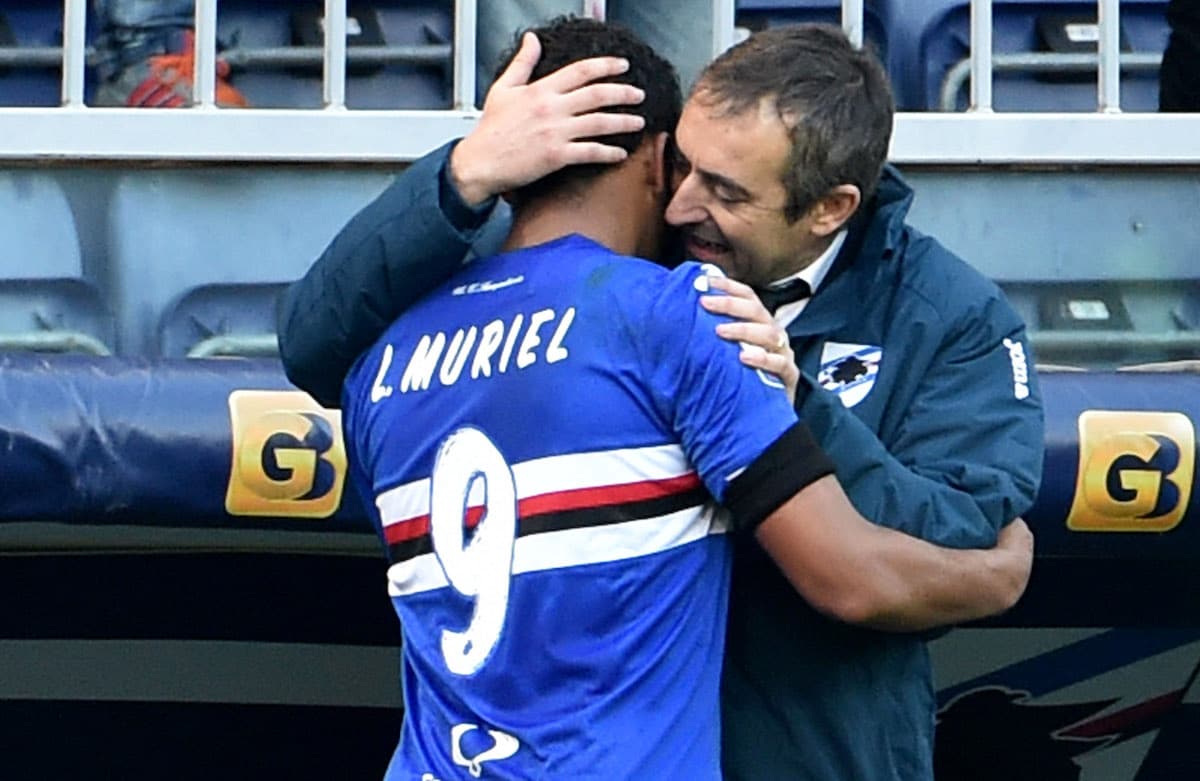 Sampdoria don’t necessarily want to sell him, but the harsh reality is they would struggle to turn down serious offers from the Premier League. Head coach Marco Giampaolo seems fully accepting of the situation, and understands there is a high chance Muriel may soon leave. “I am almost certain Muriel will leave us next season…because he’s a player of great quality,” he told Sky Sport Italia. “I honestly don’t even hope he will remain, so that way if I’m wrong, it’ll be a nice surprise.”

They are likely to face intense competition for the player’s signature, but if West Ham do sign Muriel, their striking void would finally be filled.