As the pictures of the pig’s head made headlines around the world, more than a few people must have been thinking the same thing. How has it come to this? How has a severed pig’s head been used to show one set of fans vitriol for a former hero? In all probability the pig’s head was probably brought into the Nou Camp that night, the night of Luis Figo’s first return to his former home since signing for arch rivals Real Madrid, relatively easily.  It would become one of the most iconic images related to El Clasico, a fixture that is not exactly lacking dramatic and controversial moments.

At the time Luis Figo’s release clause was 10 billion peseta (£37.5 million) which was an almost unimaginable fee for any club to pay for any player. The rules in Spain dictate that every player must have such a release clause and so, when it comes to the marquee players of Barcelona and Real Madrid, they are usually put sky high to ward off any interest.

There was one man who didn’t let this exorbitant fee put him off however. Florentino Perez was campaigning for the presidency of Real Madrid and as part of his manifesto had promised to bring Figo to Real Madrid. People laughed and called him a madman, but he didn’t let it bother him one bit.  He continued to claim that he had gotten Figo to sign a pre contract with Real, something that was to be dismissed out of hand by both the player and Lorenzo Sanz, who was still the club’s president at that point. “I’m not so mad as to do a thing like that” are the exact words Figo would use to rebuke the claims when presented with them in an interview.

A pre contract it may not have been, but Figo and Perez certainly had a confidential gentleman’s agreement. After contacting Paulo Futre, a European cup winner with Porto in 1987, a deal was struck between the two parties, speculative though it may have been. If Perez was to win the upcoming presidential elections and Figo refused to leave Barcelona for Madrid he would be subject to a penalty fee of 5 billion pesetas (£22million). If Perez was to lose the election Figo would keep 400 million Pesetas (£1.7 million) and, as if out of a crime movie, nobody would have to know. During this he deposited the £37.5 million buyout clause with the Spanish football federation. If you’re reading this and thinking it all sounds highly illegal you’d be right. It is illegal to do such a thing if you are a president but, at this point, Perez was simply a presidential candidate, making all of his actions entirely legal. 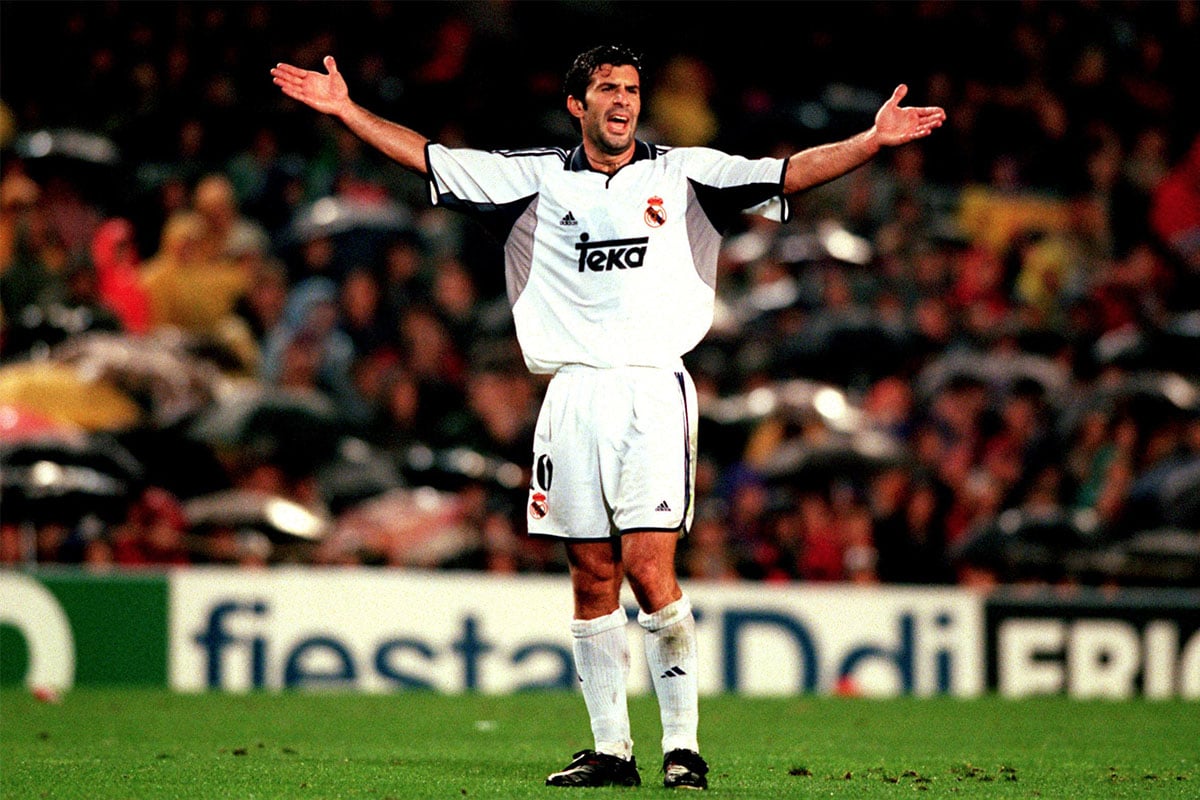 And so Perez ramped up his election campaign, knowing he was fully able to keep his promise of bringing Figo to the Bernabeau as long as he was elected. Safe in this knowledge, he started to tow the line of what is fair and unfair in an election. He promised the Real Madrid members that if he was unsuccessful in bringing Figo to Madrid he would refund the membership fees of every single member, the number of which was around 80,000. If he gets Figo he gets one of the best players in the world and at the same time causes unbelievable amount of embarrassment to Barcelona, potentially even turning the fans against the board and starting a civil war. If he doesn’t get Figo, they would get the money for their memberships refunded. If you put yourself in their shoes who would you be voting for? Perez. On July the 16th 2000 he waltzed into the presidency having won the election with a few hundred votes to spare.

It is all the more to Perez’ testament that just a few months earlier Sanz had looked to be a shoo in for re-election. After all, he had ended the club’s 32 year wait for a Champions league title in 1998 and had added to it with another European triumph only weeks before. But the fans had long ago been won over by the idea of signing Figo. Sanz could take his European cups with him, the idea of causing their rivals unimaginable embarrassment was one they had been taken with.

But now, having won the election, Perez knew it was only a matter of time before he could fulfil the promise he had repeatedly made. Footballers are wealthy people as we all know but Figo had no chance of coming up with the £22 million penalty fee he would have been subjected to had he refused to leave Barcelona. As the story goes though Figo did attempt to get out of it. Six days after Perez had won the elections in Madrid Figo knocked on the door of Joan Gaspart, also a newly elected president at Barcelona, and tried to get him to undo the deal he had come to with Perez. He said his agent had been outwitted. Indeed he had. He had nowhere to go as he too had a penalty clause, something he could not afford to pay either, leading them both to ask Gaspart to pay the penalty fee on their behalf. But how could he do such a thing? If he did he’d pretty much be paying for the Real Madrid members to watch their team for free next season as per Florentino’s promise. Perez had simply got the better of all of them.

On July the 24th 2000 there Figo stood. After 172 league games, 30 goals, and two league titles as well as the unconditional love of the cules he was in the capital holding up the Real Madrid shirt in the club’s trophy room, Alfredo Di Stefano on one side and Perez on the other, the ink on the contract dry. “I’m happy to be here and I hope to be as happy here as I have been during my years at Barcelona” was how Figo described his emotions at the time.

It wouldn’t take the wisest of men to imagine that he wasn’t feeling too happy three months later when the infamous pig’s head landed on the pitch. As well as that he had been subjected to chants of “Die Figo!” and a jeering of his touch so loud it could have caught the attention of Javier Saviola as he plied his trade west in Buenos Aires. Who? The next man to play for both Barcelona and Real Madrid of course.