In the sun-kissed town of Leganes, Barcelona’s weekend victory over the local club had a very familiar feel to it. They, as the Spanish say, ‘suffered,’ yet were so beautifully ruthless. Under Luis Enrique this type of triumph, particularly on away days, has become the norm. The Asturian can add another tally to the win column to go along with the other 102. The opposite side shows that he’s only lost or drawn 29 times. Simply put, Luis Enrique makes winning look easy.

That’s probably why he doesn’t receive the recognition he deserves and remains vastly underrated- not that it bothers him. There’s an ignorant perception that Barca are easy to manage whether that be because they have Lionel Messi or ‘play in an uncompetitive league’ which couldn’t be further from the truth. Enrique once joked that all he has to do is say “Abracadabra” to Messi, Luis Suarez and Neymar in order for them to produce match-defining moments but he made that remark when in a position of comfort. He knows all too well that managing Barca is probably the hardest gig around due to the expectation to win and to do so in a certain way from the Catalan media and a fanbase that’s rarely satisfied. A job, it must be said, he was almost fired from in 2015 because he wasn’t thought to be living up to those lofty standards.

If that argument needs to be quashed further, the season preceding Enrique’s arrival at the Camp Nou perfectly demonstrates that not any Tom, Dick or Harry is capable of successfully coaching Barca. Gerardo ‘Tata’ Martino worked with the same golden generation but, among other factors, his contrast in (or lack of) philosophy and mismanagement of the players on a personal and physical level resulted in the Blaugrana playing their worst football in many a year and ending the 2013/14 campaign trophyless.

Enrique, however, has perfected the stylistic shift that Barca have desperately sought for the last few years and now eight of the 10 trophies that have been up for grabs during his reign are sitting in the Catalan club’s museum. In that time he was also voted manager of the year but didn’t really care much for it.

That, in itself, is important as football has become so intertwined with entertainment that even managers are now required to put on more of a show, to supply the game with extra if pointless narratives. So much of a coach’s popularity is derived from their demeanour yet Enrique is anything but flashy or charismatic and his press conferences are as boring as watching paint dry. Consider a handful of the best managers in the world at present and compare their personality with the former Celta Vigo boss. Enrique isn’t charming like Pep Guardiola, he doesn’t have the desire to inflate his ego like Jose Mourinho nor is he as animated as Antonio Conte, Jurgen Klopp and Diego Simeone.

Instead, Enrique is stern and calculated, he picks the team, wins then moves on to the next game. There’s no act, just ruthless simplicity and his team has become the ultimate reflection of him. That should be something that’s celebrated but is too often criticised by sections of the Barca fanbase themselves- they want Enrique to be Guardiola.

It’s ludicrous that people still can’t take to Enrique because he decided to take a turn while Pep kept going straight when both were walking down Cruyff avenue. Of course, Pep’s Barca should never be forgotten, it’s arguably the greatest football team of all time and quite possibly the closest thing to collective perfection the sport has ever seen. The team that peaked in 2010/11 was so gloriously fluid with its meticulous velvet passing, carving open every team that stood in their way which was the epitome of the smooth character Guardiola is. 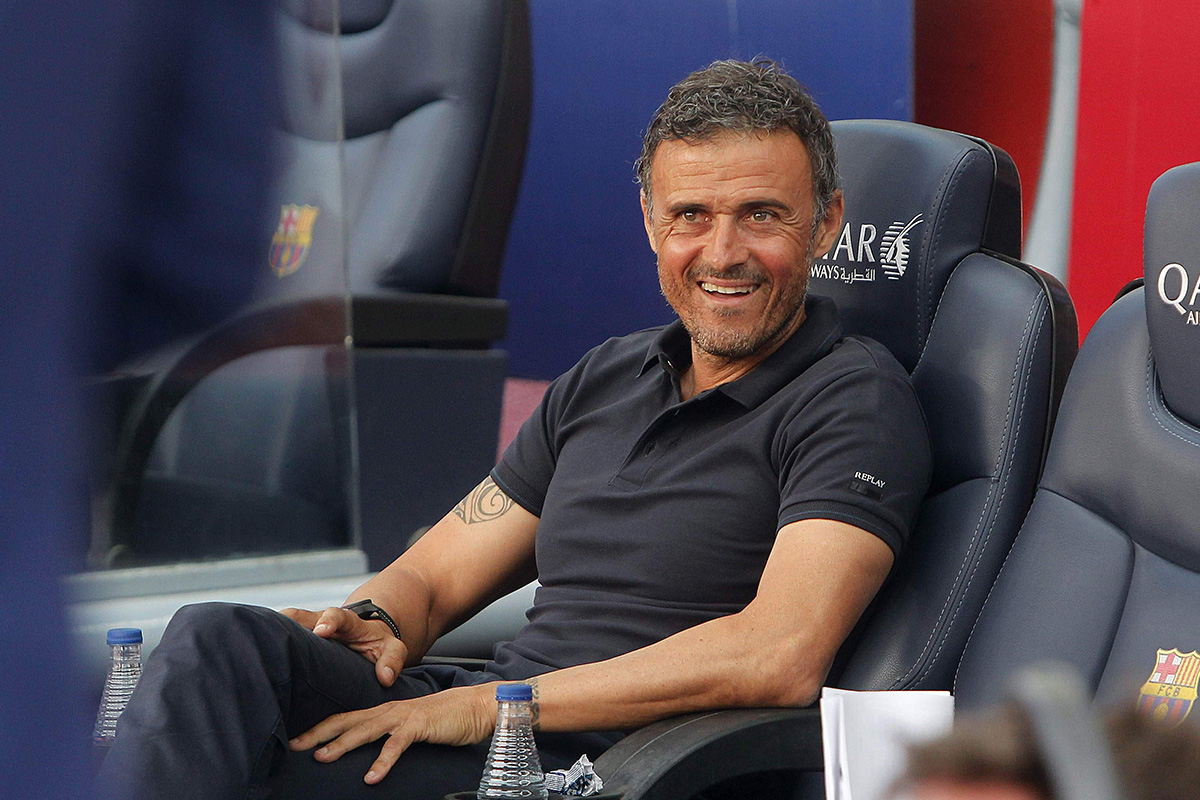 Enrique on other hand is a fighter- hence the nickname ‘Lucho’- and he’s toughened up this team by making them more physical, athletic and direct. Enrique has convincingly stamped his influence on Barca- his Barca- which should also go down as one of the best in history. Not because they’re as aesthetically pleasing as Guardiola’s team but because they’re far more destructive.

It’s worth remembering the situation at the club when both men took over. In 2008, Barca were a spent force under Frank Rijkaard and were in desperate need of an overhaul. Pep made the tough decisions with personnel, namely Ronaldinho and Deco, and tactically changed the values they would stand for.

In 2014, following a couple of below par seasons, Barca didn’t need a revolution but evolution. They didn’t need to change the principles that made them so great, rather they needed to rediscover how great they were. They didn’t need another Pep but someone who could wake this group up and add extra facets to their game. ‘Lucho’ has done exactly that and Barca are the best team in the world again because of it.

In just over two years, Enrique’s overseen the transition from era defining players without feeling their absence. First Victor Valdes and Carles Puyol then Xavi and, now, Dani Alves. His influence on Gerard Pique, who’s playing the best football of his career, has been enormous. The MSN trio have worked better than anyone could have imagined which is largely down to the manager convincing his best player to tweak his position.

No longer do Barca look down on the counter-attack, in fact, they’ve embraced it and come to rely on it in plenty of tricky situations. They’re fitter, stronger and no longer the soft team of a few years ago that would buckle under sustained pressure or look lost at set-pieces. One major criticism of the ‘mister’ has been his reluctance to promote from within but the transformation in Sergi Roberto- a La Masia reject until last year- is as good as bringing through half a team of prodigies.

Enrique’s tireless work has made Barca less predictable, more lethal and able to win by any means possible because of the many weapons they possess. That effect extends to the opposition too. In years gone by, rivals could sit in, stay compact and narrow and frustrate the life out of the Blaugrana. Now, opponents can stay camped at the edge of their own box, play narrow or press high but whatever the problem, this team almost always has the solution.

Enrique’s not credited with being innovative and it’s true that compared to other coaches in Barca’s history, he won’t leave behind as strong a legacy but the ex Blaugrana player and captain was hired for immediate results and he’s delivered. At this stage of his tenure, he’s won as many trophies as Guardiola and by the end of his third year- when his contract runs out- there’s a good chance he’ll surpass his old friend.

Perhaps then, he’ll receive the adulation he’s due. He’s the man behind Barcelona’s renewed success and Cules should pray that he decides to stay beyond the end of the season.