Arsenal find themselves in a situation almost entirely alien to modern football: having to find a replacement for a man who has been at the helm longer than many of their fans have been on this planet.

After almost 22 years, Arsène Wenger is stepping down. It draws obvious parallels to when Sir Alex Ferguson left Manchester United after 27 years of service, of course, but there is a critical difference in that Wenger has not hand-picked his successor.

Whereas Ferguson personally anointed David Moyes as United's ‘Chosen One,' Wenger is not actively involved in the club's search for the man tasked with re-establishing Arsenal as a Premier League superpower.

Almost immediately after Wenger's statement appeared on Arsenal's official website, an eclectic cohort of names were mentioned as possible successors.

However, one man appears to have taken up the most column inches in newspapers over the past 72 hours: Luis Enrique.

Of course he has. Enrique is coming towards the end of his year-long sabbatical after leaving Barcelona in 2017. According to various reports, the 47-year-old is enthusiastic about the prospect of coaching in the Premier League.

He had been linked with Chelsea, but after The Times reported that the Blues had dropped their interest to instead pursue Napoli boss Maurizio Sarri, Enrique became the clear frontrunner.

Arsenal's main fear is to avoid doing a United. In other words, install a manager on the advice of the current incumbent, only for him to be exposed as hopelessly out of his depth in the space of eight months.

With that in mind, Enrique seems like an attractive candidate. He boasts the most impressive CV at club level behind Ancelotti, having guided Barcelona to a treble in his first season in charge.

Overall, Enrique can boast two La Liga titles, three Copa del Reys and a Champions League as his major managerial honours. Such successes go a long way in explaining why his reported wage demands are in the region of a rather staggering £15million-a-year.

And yes, Enrique would be an exciting appointment considering he matched Pep Guardiola's treble achievement. With that notch in his belt, the Spaniard would almost certainly back himself to challenge his predecessor at Barcelona's grip on Premier League supremacy. 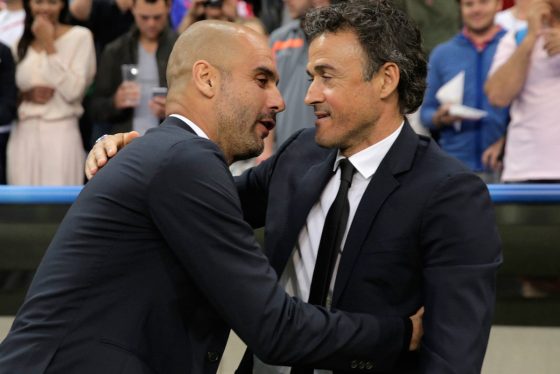 However, there are a number of reasons that make Enrique an avenue fraught with risk. While his time at Barcelona yielded tremendous success, his departure did not produce a state of mourning around Catalonia like when Pep Guardiola called it a day in 2012.

Enrique summed his character up best when he said, “this is my style, I don’t care if you don’t like it.” He is an impressive man, but an exhausting man. His singular, unquenchable obsession with a perpetual state of improvement has earned him plenty of admirers, but no shortage of foes. If you do not connect with the 47-year-old's philosophy, methods or personality, he will not hesitate to act.

Just ask Lionel Messi. Despite the Argentine's sparkling form under Enrique, the forward was dropped in January 2015 following a row with his coach. Their relationship broke down so much so that the Argentinian was heavily linked with a move away from the club he joined when he was 13.

And that wasn't an isolated case. In August 2011, barely a few weeks into his solitary season at Roma, Enrique dropped Francesco Totti. He was, of course, accused of heresy but it mattered little to the Spaniard: the most daring acts don't faze him.

Enrique earned the respect of his players but there was little adoration for him or his methods, unlike Guardiola. His pertinacious ways ruffled feathers at Barcelona and, given his prickly temperament, clashes with Arsenal's new head of recruitment, Sven Mislintat, and director of football, Raul Sanllehi, are a distinct possibility.

In Enrique's final season at the Camp Nou, Barcelona were humiliated by Paris Saint-Germain, losing 4-0 in a harrowing Champions League assignment in the French capital. While the Blaugrana roared back with a 6-1 thumping in the return leg, the near-miraculous comeback merely papered over the cracks.

At that point, Barça were already losing their grip on the La Liga title to Real Madrid and, while Enrique did lead the club to the Copa del Rey, his tactics had become extremely unpopular.

Adhering to the free-flowing, attacking football espoused by Johan Cruyff and Guardiola is no mean feat, but Enrique decided to go in another direction.

Admirable and courageous, for sure, but also unsustainable. Enrique developed a different type of 4-3-3 to the short-passing one that became synonymous with Guardiola's reign. Instead, Enrique's system favoured a more counter-attack-based approach and, while it was certainly unattractive at times, it was remarkably effective.

The key to that system, however, was a reliance on an astonishingly potent attacking trifecta of Messi, Luis Suárez and Neymar. Plainly, the playing personnel at the Emirates just don't match up to ‘MSN'.

Hypothetically, if Enrique were to join and deploy the same formation, he could have an attacking three comprised of a central Alexandre Lacazette flanked by Pierre-Emerick Aubameyang and Mesut Özil.

Possessing pace, creativity and clinical finishing, it looks promising on paper but Arsenal do not possess the same midfield might to support that kind of system. Not yet, anyway. Enrique would require significant upgrades on Granit Xhaka, Jack Wilshere, Mohamed Elneny and Santi Cazorla, should the latter ever return to full fitness.

Going back to that PSG match, the ease with which Unai Emery's side carved open Barcelona was indeed alarming. Messi had scored ten goals in five Champions League games prior to that night at the Parc des Princes yet failed to touch the ball inside PSG's box.

The energetic, enterprising midfield trio of Marco Verratti, Blaise Matuidi and Adrien Rabiot tore through Andrés Iniesta, André Gomes and Sergio Busquets. Yet, while his players crumbled before his eyes, he did nothing. No switch in tactics, no substitutions. Nothing. Enrique eventually switched to a 3-4-3 a few weeks later, but the late-season change failed to secure either league or European glory.

Many observers took Enrique's lack of a response as proof that he didn't have a contingency for when MSN weren't happily dancing their way around defenders.

In stark contrast, Enrique's time at Roma was plagued by indecision. He deployed 13 different line-ups in his first 13 league games, producing an erratic run which included five wins, six defeats and two draws.

There is a strong case for Enrique as a potential successor to Wenger, but Arsenal fans should not expect a smooth ride if he's appointed.

While his spell at Barça was trophy-laden, underwhelming tenures at Roma and Celta Vigo point to limitations. With zero experience of the Premier League on or off the pitch, Enrique's appointment would represent a bold move on Arsenal's part.

However, considering recent reports in national papers, it seems as though they're willing to place their trust in a man who once said, if it were up to him, he would only give out six-month managerial contracts.