We expect to see an exciting rematch in the Ludogorets vs Malmo matchup in the Champions League playoffs, so let's dig a bit deeper into the game and check the teams, betting odds, and other important things.

Our free tips and predictions for Ludogorets vs Malmo

You can find the best Champions League betting tips on our website, including the top betting predictions for the Ludogorets vs Malmo duel:

The Swedish team has been the most pleasant surprise of the CL Qualifiers so far and they enter the rematch against Ludogorets with a two-goal advantage. However, the Bulgarian team has a lot of experience in these types of matches and they are a very good team, so we expect them to win this game. We can't offer a prediction on whether they can overcome the deficit, but we still expect them to win the game.

While we didn't see both teams score in the first leg, this is something that could happen in the rematch. Both teams have been playing offensive football in their European matches and we've seen both teams score in all four matches played by these two teams in the previous round. So, our prediction is for both teams to score in this game as well.

Since we expect both teams to score in the game, we also expect it to go over 2.5 total goals. After all, Ludogorets will have to attack from the start if they want to overcome a deficit of two goals, which will also leave Malmo with a lot of room to counter-attack. In any case, these two teams should combine for at least three goals in the game.

Top odds and important stats for Ludogorets vs Malmo

If you want to bet on the top Ludogorets vs Malmo odds, check our selection of odds taken from some of the best betting sites in the UK:

Ludogorets vs Malmo preview: Can Ludogorets overcome the deficit?

After eliminating Mura, Ludogorets had a much tougher task in the previous round of the CL Qualifiers against Olympiakos. Unfortunately for them, they managed to eliminated the Greek team after they were better on penalties. The first leg loss to Malmo by two goals will be tough to overcome, but Ludogorets has the quality to do it, especially after they started the new season in the Bulgarian league with three straight wins.

It's been a great season so far for Malmo who is currently sitting at the top of the Swedish league after more than the half of the games have been played, although they have the same number of points as AIK and Djurgarden. Meanwhile, the team Riga, HJK, and Rangers to reach the playoffs of the CL Qualifiers and they are in good position of reaching the group stages as well after a 2-0 win over Ludogorets in the first leg. However, they will be without Knudsen and Toivonen in the second leg.

FAQ for Ludogorets vs Malmo 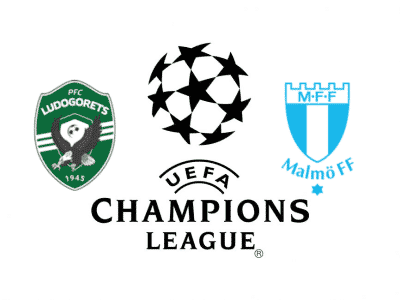