Wayne Rooney has played alongside some of the greatest footballers in the world throughout his career, from Ryan Giggs to Cristiano Ronaldo, Paul Scholes and Roy Keane to Steven Gerrard and Frank Lampard.

So when the former England captain says current DC United cohort Luciano Acosta is among the best team-mates he has lined up next to, there could hardly be a greater endorsement of the Argentine playmaker's abilities.

And Acosta's performances in MLS, where he and Rooney have struck up a profitable bond at Audi Field, has reportedly alerted Manchester United to his gifts.

Scouts from the Premier League club were in attendance to watch the diminutive 24-year-old as DC took on Los Angeles FC last week.

Acosta was aware of the scrutiny he was under, admitting United's talent spotters might have been disappointed with what they saw, as DC slipped to a 4-0 defeat with Rooney sent off.

“I’m obviously happy [Manchester United] was here – they came to see me, and obviously I just went out and tried my best,” Acosta said post-match. “Today wasn’t my day, we were up against a great opponent and in reality I’m just sad for the group’s performance today, and mine too.” 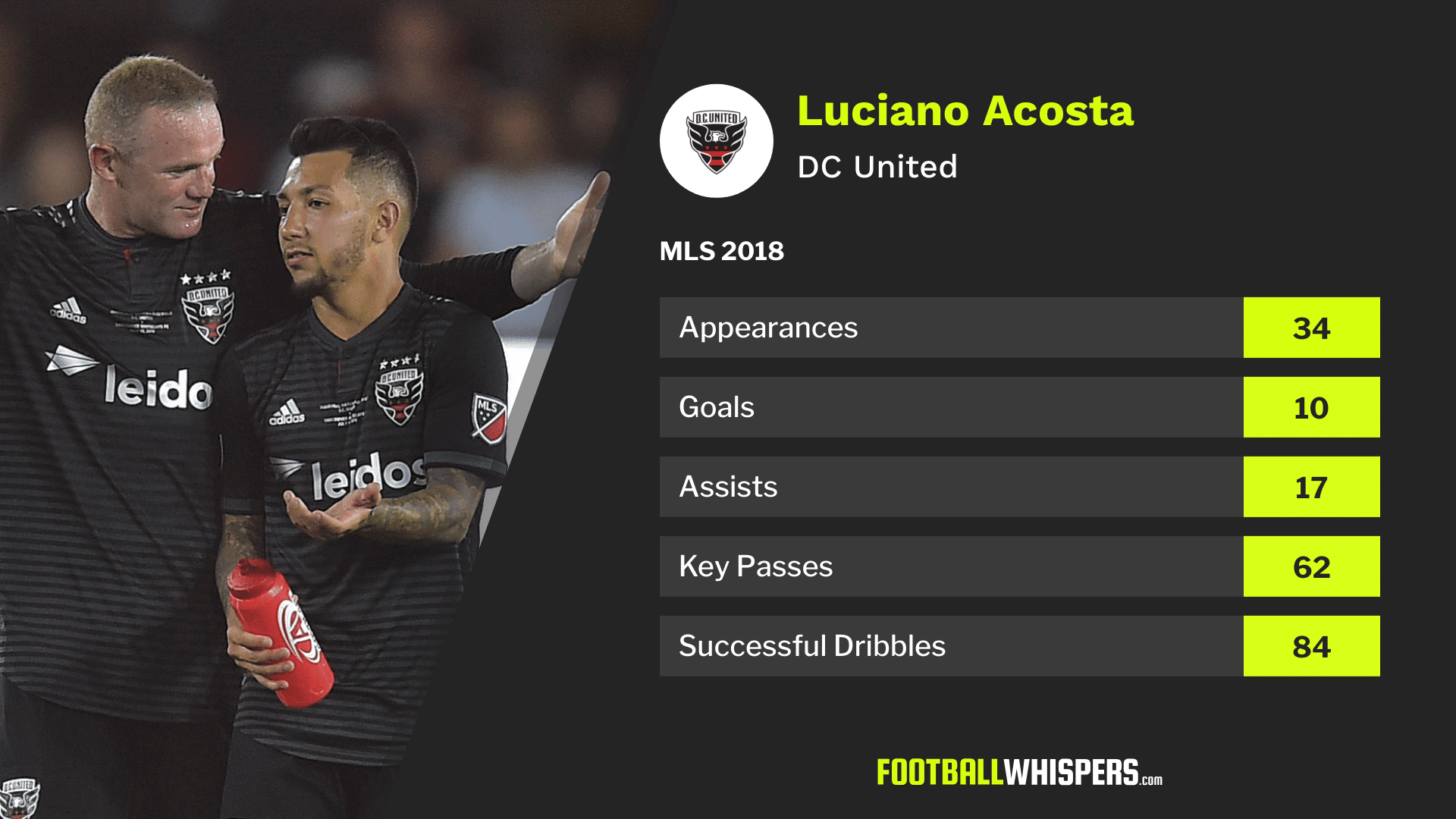 But that one sub-par display shouldn't put United off. Acosta's star has been rising rapidly over his three years in the States, and his breakout campaign last term marked him out as a player with the potential to be one MLS's greatest exports.

Acosta's form was so impressive that he came close to joining French champions Paris Saint-Germain in January, earmarked to help fill the void left in the Parisians' attack following Neymar's foot injury.

The switch ultimately collapsed, but, with his contract set to expire at the end of the 2019 MLS season, a move to Europe beckons.

Argentina, of course, has a long and rich tradition of producing world-class No.10s, players often slight of frame who utilise their low centre of gravity to the fullest and perfect the art of tearing defences asunder with incisive passes, jinking dribbles and slick combination play.

Diego Maradona and Lionel Messi are the most obvious examples, but Acosta's style is most reminiscent of former Valencia and Benfica creator Pablo Aimar.

Despite his size, Acosta, schooled in Boca Juniors' youth set-up, is impressively robust, able to hold off changes from much bigger opponents, pirouette on the ball and dribble his way through pressure.

Equipped with an array of passing techniques with which to unpick defences, his DC United highlight reel includes scooped balls over the top of an opposing backline to meet the run of a colleague, overload-exploiting switches of play and slide-rule through-balls.

And, as a supremely gifted dribbler, he is able to go it alone when required, swerving his way beyond multiple defenders, exhibiting flawless close control, always with his head up, scouting for a pass or shooting opportunity.

Acosta added goals to his game last season, too, bagging ten in 34 MLS appearances, mixing rapier strikes from range with cute finishes from inside the penalty area.

Rooney clearly enjoys playing with Acosta. The pair have quickly developed an almost telepathic understanding, seemingly able to locate each other without so much as a glance, and revelling in laying on chances for one another.

“He now knows what kind of teams are interested in him,” Rooney says of Acosta. “If he continues performing up to his ability, he will get there. He’s young and he’s talented, one of the best I’ve played with.”