Uruguayan midfielder Lucas Torreira is making waves in Serie A thanks to his impressive displays with Sampdoria.

The 21-year-old, who conducts play from the base of the Samp midfield, is reportedly being eyed by a number of clubs, including Everton, and his recently-discovered penchant for scoring screamers from outside the box will have done nothing to discourage potential suitors.

After starring as his side beat champions Juventus in the 12th round of Serie A fixtures, Torreira is at the heart of frantic transfer speculation. We've profiled the young playmaker, analysing his strengths, weaknesses, statistics and value, to see how far he could go.

Who is Lucas Torreira?

Sampdoria picked up Torreira from Serie B side Pescara in the summer of 2015 for just €1.5million, electing to leave him with the second-flight side on loan for a season to gain further first-team experience.

When he joined up with his new team last summer, Torreira instantly became a key player, featuring in 35 of the Blucerchiati's 38 league games in his first season at the Stadio Luigi Ferraris.

A deep-lying playmaker with a metronomic ability to dictate the tempo of his side's play, Torreira has drawn admiring glances from several top sides around the continent.

Having recently added goals to his game, scoring three stunning strikes – a brace against Chievo and one versus Juventus – in the space of three games in November, there are few weaknesses remaining in his game.

Despite interest in the player, however, Sampdoria's sporting director, Carlo Osti, is adamant that Torreira will be going nowhere in the upcoming January transfer window.

“Torreira has gone from Serie B to A with ridiculous ease,” Osti told La Repubblica.

“It was said that if he scored even just a few goals, he'd be perfect. He's already scored three and my phone rang continuously on Monday.

“Still, no-one will leave in January, even if everyone's already asking me about him.”

What are Torreira's main strengths?

Torreira, first and foremost, is a pass master. His primary task is to sit at the base of midfield and conduct play from deep, linking with team-mates, protecting possession and moving his side up the pitch.

This season, he is averaging an impressive 65.7 passes per 90 minutes in Serie A, at an accuracy of 86.9 per cent.

With his superlative technique and sharp vision, Torreira is capable of spreading play over all ranges, and can conjure scoring chances for Sampdoria's forward when at his best, moving the ball forward at speed. 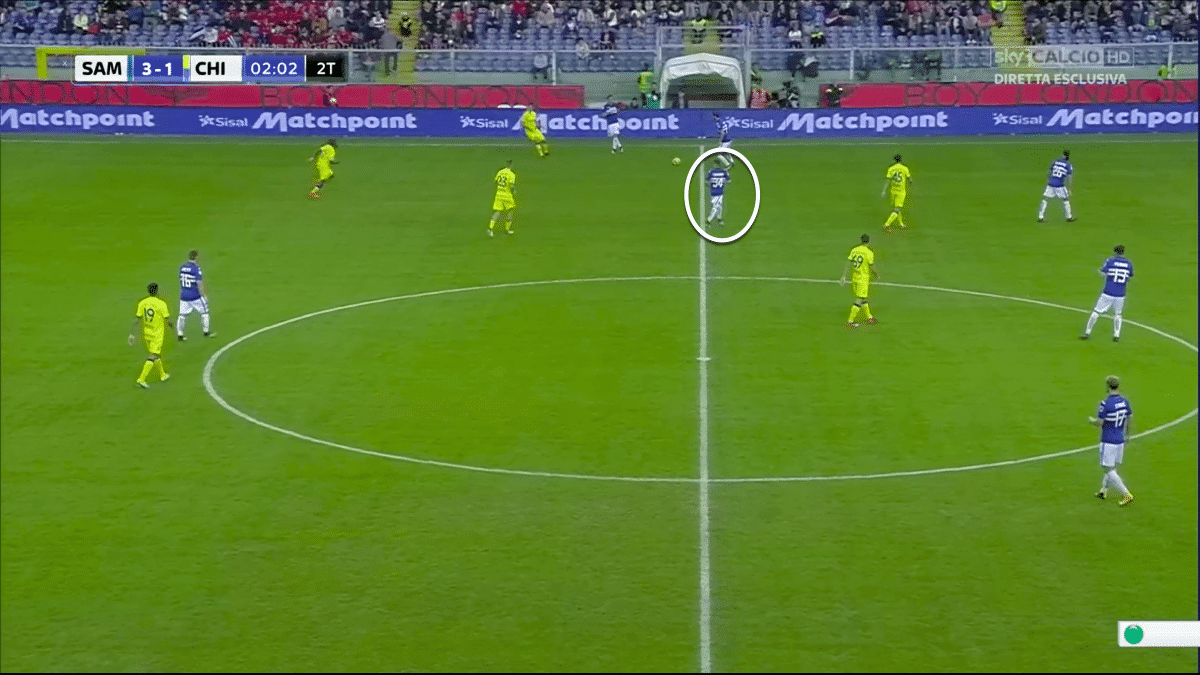 In the above image, we see Torreira in his typical mode: an available passing option for the man in possession and with his head up, scanning upfield for his target. 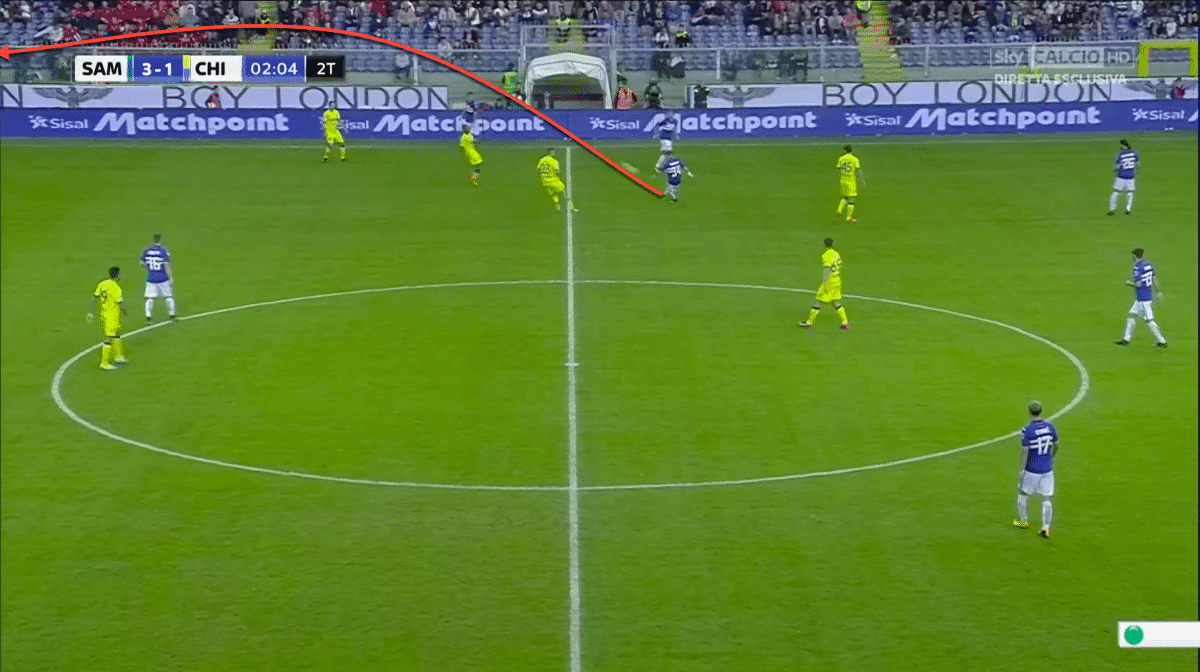 When he receives the ball, he already knows what he wants to do. Without taking a controlling touch, and exhibiting breathtaking technique, Torreira sweeps a 50-yard pass into the Chievo penalty area. 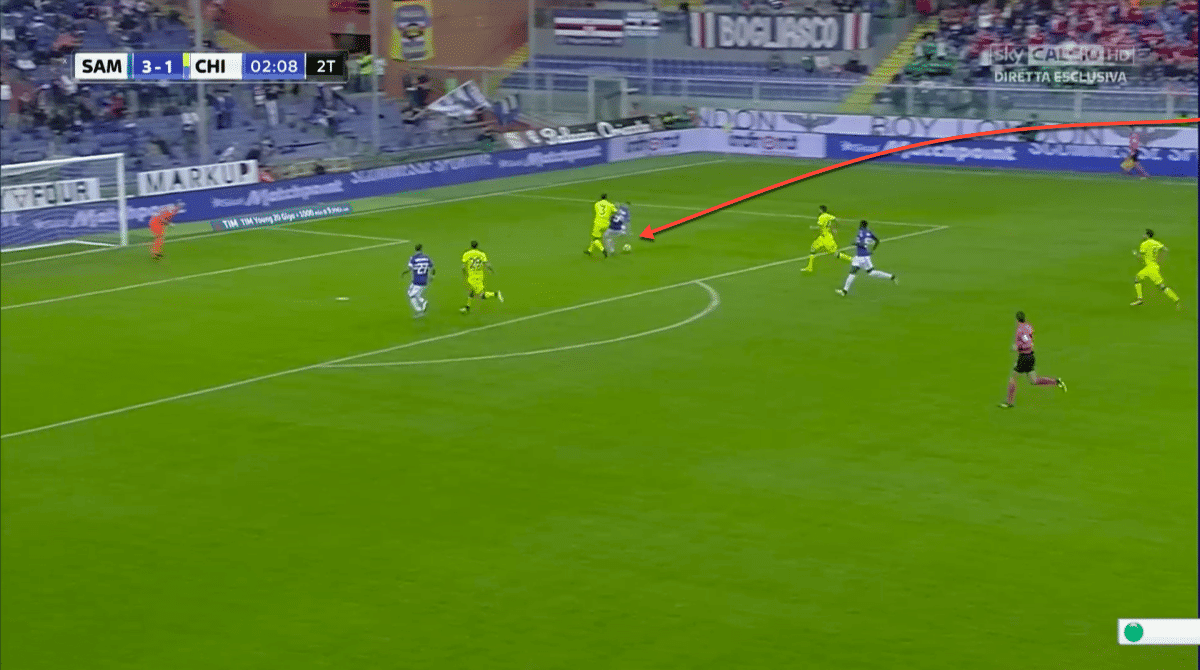 The first-time ball lands right at the feet of striker Gianluca Caprari. In an instant, Torreira has taken his side 50 yards upfield and manufactured a situation from which a shot at goal is highly likely.

Torreira didn't manage to score in his first season with Sampdoria, but he has quickly put that right this term, adding another string to his bow by identifying space on the edge of the final third and unleashing rasping shots into the corner of the goal. 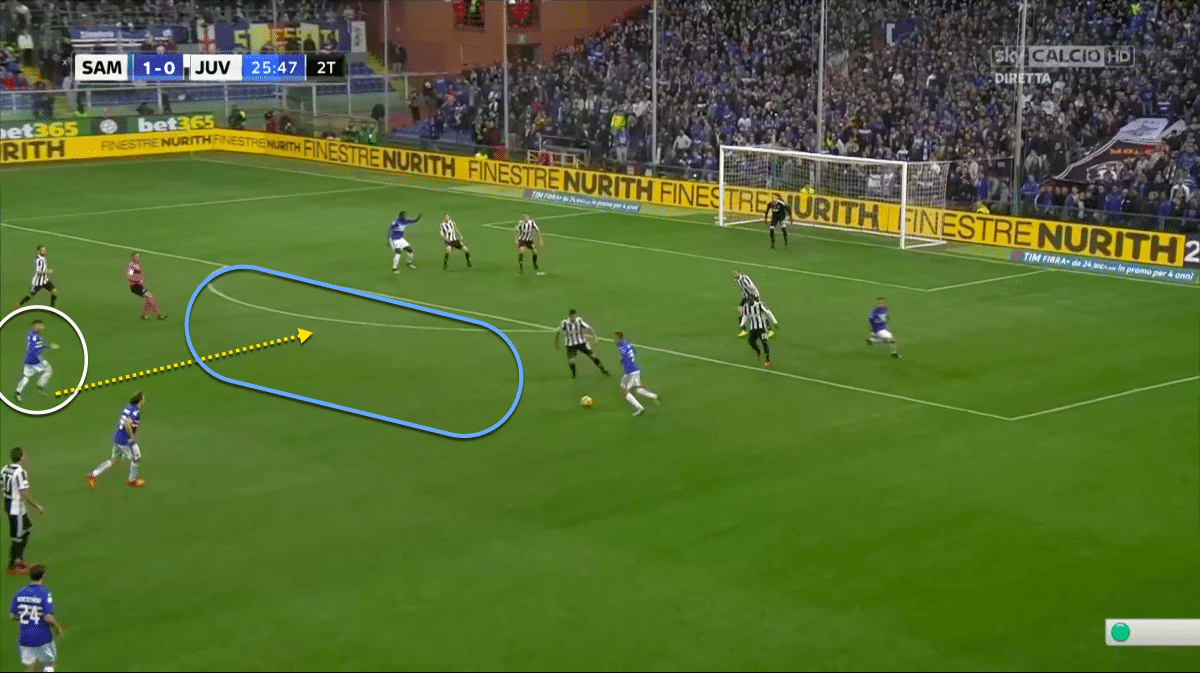 One such example is his stunning strike against Juve. As shown above, the Uruguayan midfielder (circled white) spots a pocket of space on the edge of the Juventus box (highlighted blue) and makes a run into it. 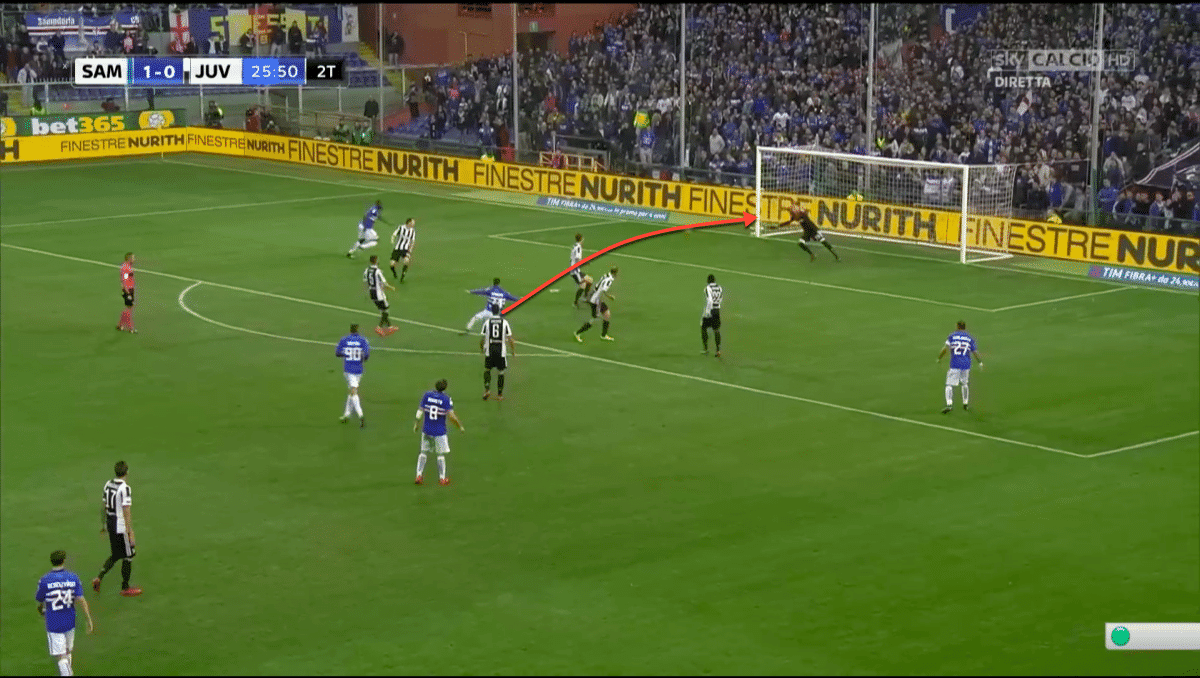 Receiving the pass, he takes one touch to get the ball out of his feet and rockets an unstoppable shot into the bottom corner from 20 yards, leaving Wojciech Szczęsny with no chance.

What are Torreira's main weaknesses?

If there is any downside to Torreira's game at this early juncture of his career, it is that he can occasionally slow Sampdoria's play down too much.

Of course, when looking to take the sting out of a game – whether protecting a lead or stopping an onslaught – having a player who can slow the pace of play down can be a huge asset.

But there are times when the 21-year-old fails to capitalise on counter-attacking opportunities fully by opting for a safer short pass, rather than looking to be more incisive. 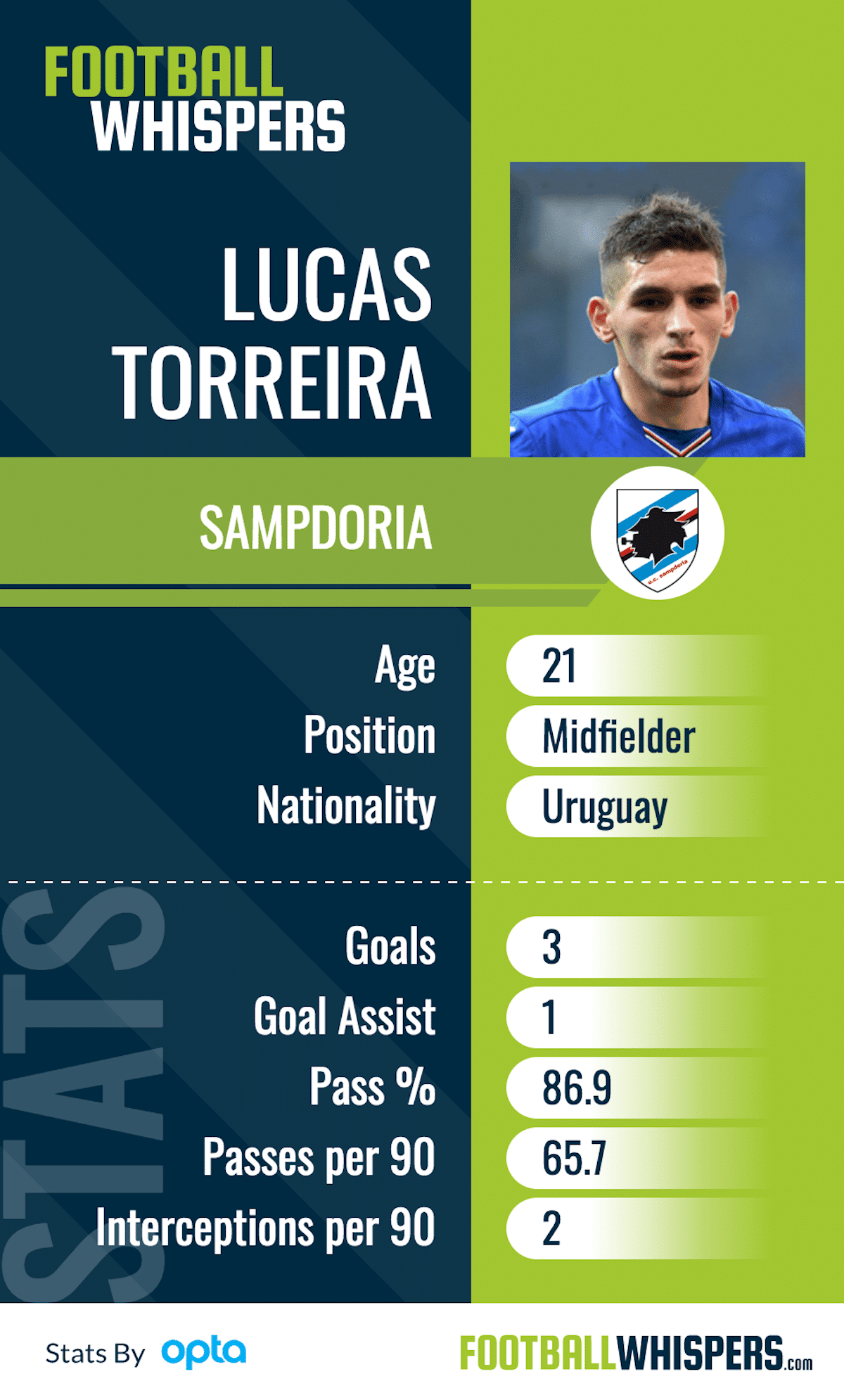 How much is Torreira worth?

Although his profile is on the rise, Torreira is probably still at the stage where he could be acquired at some point in the near future for a relatively reasonable fee.

In the current market, players of his type, age and potential could fetch upwards of £40million, but any prospective buyer could likely acquire the gifted playmaker for around half that figure.

However, if he continues to impress, and if more major clubs take an interest in him – Roma are set to be tracking his progress closely – Torreira's price could soon be bumped up.

Some may consider Torreira's size – he stands at just 5ft 6ins – an issue when connecting the player with a potential move to the Premier League. But N'Golo Kanté's performances with Leicester City and Chelsea have shown that a diminutive central midfielder can have success in a league widely considered to be among Europe's more physical.

Besides, what Torreira lacks in height, he makes up for in tenacity and technique.

Linked most strongly with Everton, the man from Fray Bentos, Uruguay, has the ideal skill set to compliment a destroyer like Idrissa Gueye in central midfield, orchestrating play while the former Aston Villa man sweeps up alongside.