Football clubs are constantly looking to the future. They always have one eye on improving, developing and signing players to ultimately strengthen their chances of success. Chelsea are no different.

And despite going through a so-called ‘crisis' this season, the Blues sit fourth in the Premier League, just one point behind Manchester United in second.

So while the Blues' struggles have certainly been overplayed, it hasn't been entirely smooth sailing for Antonio Conte this term – the Italian has had his share of selection issues.

Pedro and Willian have started six games, while Eden Hazard has began five. There is no clear decision in Conte’s mind, so it’s no surprise the Blues have been linked with players who could bring something different to their talented attack.

Reports in France from Le10Sport suggest the Chelsea boss would be willing to sell Willian to in order to fund move for Paris Saint-Germain’s Lucas Moura.

The former is now 29 years old and, with his countryman rarely picking up minutes for the French side and being four years his junior, it could be the perfect time to strike.

Lucas joined PSG back in 2012, arriving from Sao Paulo on the back of a blaze of promise and excitement. He was the next big thing, wanted by Chelsea and also a Manchester United transfer target. But the Parisians bid highest, blowing the Premier League clubs out of the water.

He has since racked up 153 appearances, in which the 25-year-old has scored 34 goals and added 29 assists. While he is often deemed a player who has failed to live up to extraordinary potential, Lucas has been involved in a goal every 148.9 minutes for PSG.

Since his arrival at Stamford Bridge, Willian has been involved in 33 goals in 143 games. That works out as a goal every 271.4 minutes, albeit in a much harder division.

So the younger Brazilian has performed at a more effective level, but it has never been good enough for the Ligue 1 club to put their trust in him.

The likes of Ángel di María, Julian Draxler and now Kylian Mbappé and Neymar have arrived in recent summers and now Lucas finds himself pushed down the pecking order.

This season, he has played only 72 minutes in the league, making just five substitute appearances. He signed a contract extension in 2015 but a lot has changed in two years. A potential free transfer in 2019 is a long way away.

So could PSG sell? Well the club are open to letting players leave as they attempt to boost their funds to offset the £196million spent on Neymar and the pending £166million arrival Mbappé next summer.

However, Lucas is close friends with PSG's superstar Brazilian, and it’s understood one of stipulations from the former Barcelona star before he joined the club was that Lucas was kept on board.

PSG obliged but now could change tact, it’s not like Neymar can go anywhere, after all.

Analysing from 2014 to the end of last season. Willian has improved his numbers over the last three campaigns and although he managed fewer assists last term, his key passes went from 1.8, to 2.6, to 3.0. 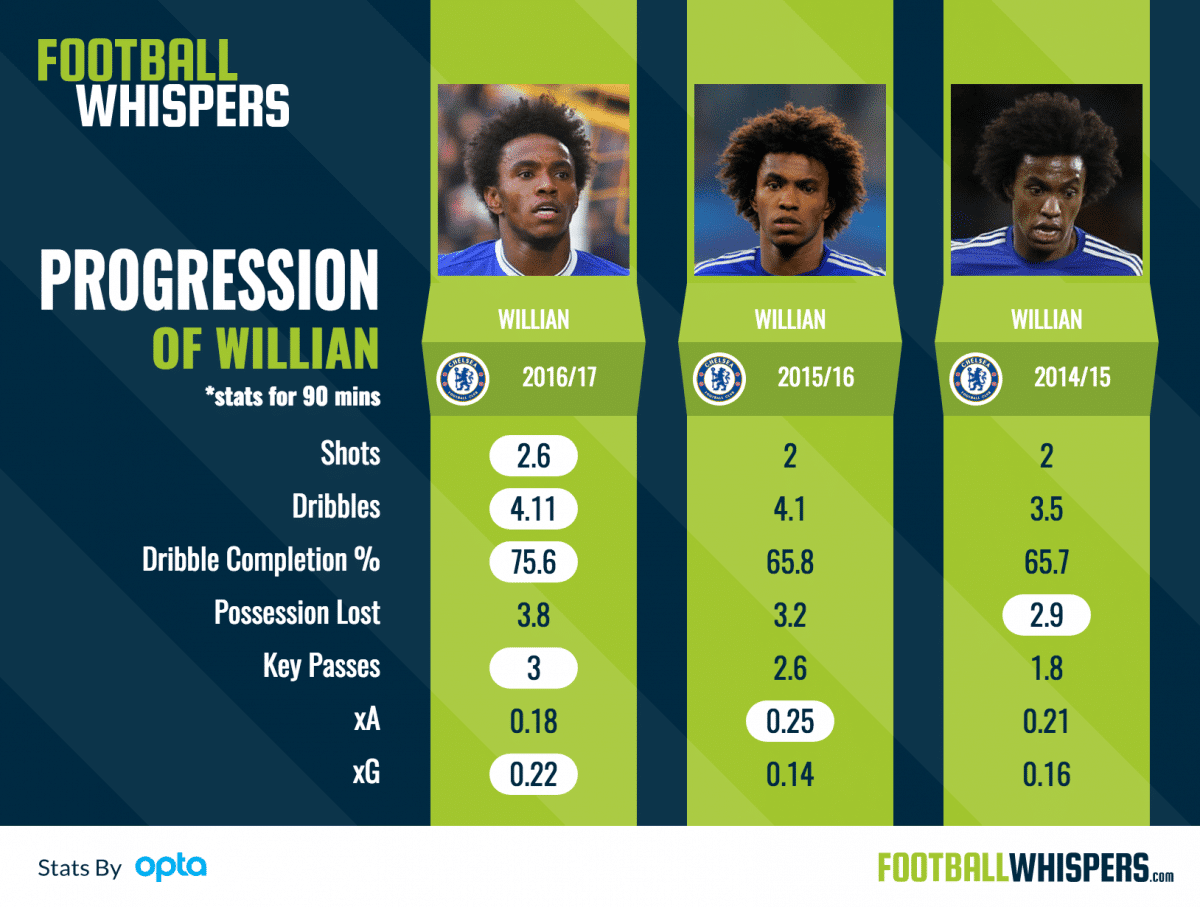 Expected Goals and Assists measures the probability of a chance becoming a goal and is increasingly becoming a more reliable way of tracking the impact players make.

Last year, Willian’s xA per 90 dropped from 0.25 to 0.18, suggesting the quality of chances he create dropped, explaining his return of two assists. However, his xG per 90 increased from 0.14 to 0.22, helping him find the net eight times.

Lucas, meanwhile, is the prime example of a player who could be capable of so much, if given the minutes to express himself and put in a team who believes in his ability. 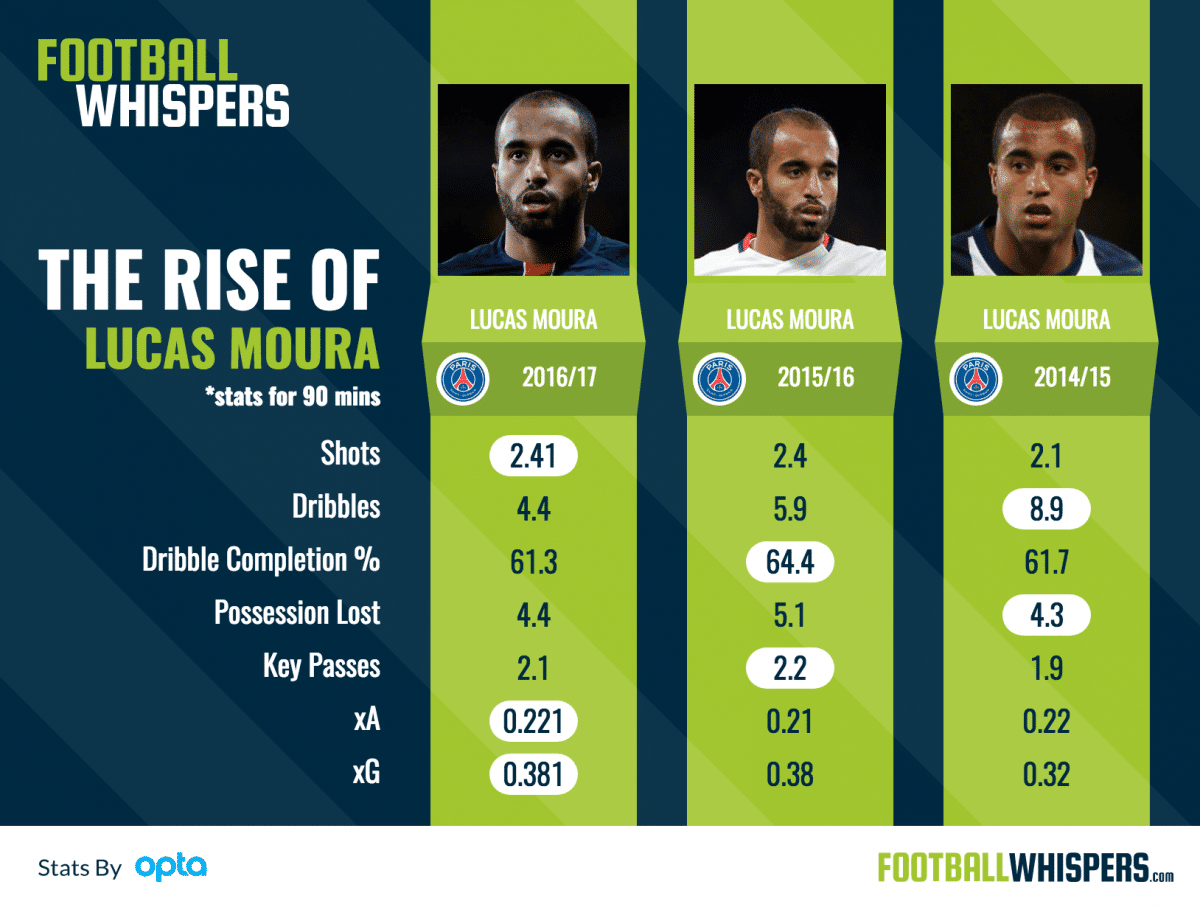 Although his attempted dribbles have gone from 8.9 down to 4.4, he is completing just over 60 per cent of those he tries, which makes him a consistent threat with the ball.

His key passes and shots per 90 have remained steady, but compared to Willian his creativity and potential to score goals is higher, with an xG per 90 of 0.38 and xA of 0.22 last season.

Put the two Brazilians side-by-side and Willian wins in most categories, but Lucas has age on his side. At 25 years old, he is just reaching the peak stage of his career.

Last year, the 2,435 minutes he played was the most he managed since arriving in Europe. And although PSG finished second to Monaco, Lucas scored 12 goals for PSG – only Edinson Cavani finished with more – and picked up five assists. 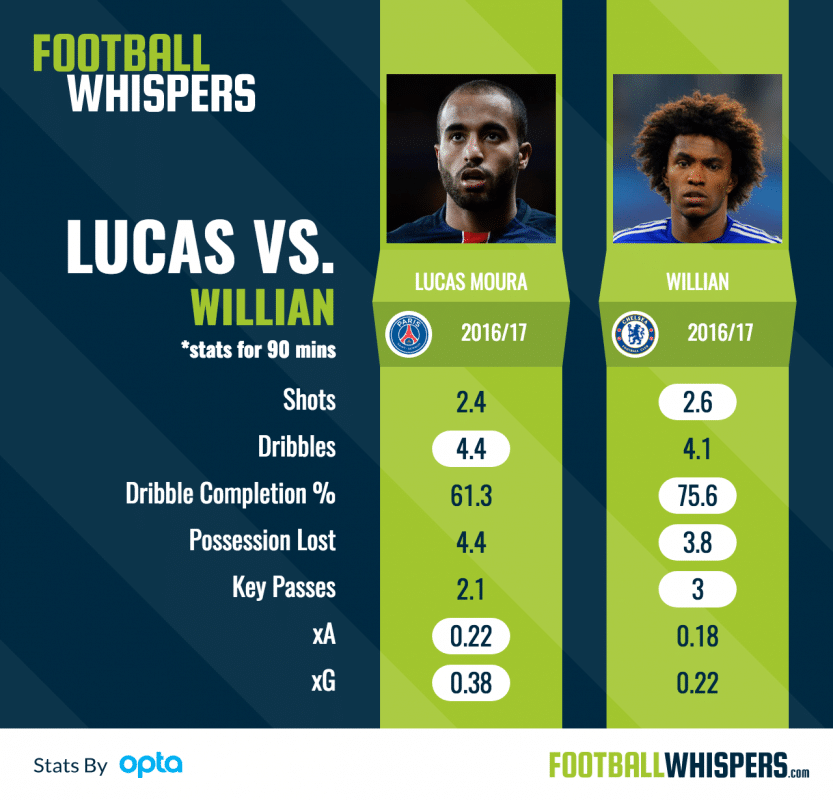 Chelsea could possibly think Willian’s return is only going to decrease, while Lucas is on the up. Cashing in now would mean they get the best possible deal for their Brazilian forward, while bringing in another who is undervalued by his current club.

Able to play anywhere across the attack, Lucas would be a great option in Conte’s front-line, and he’s more than just a winger. He can beat multiple defenders at will and has also developed the ability to time his runs and get into the box like a forward.

Rather than scoring goals from distance, he is a willing runner and can get to the back post and find a way to get on the end of chances.

Out of his 34 goals for PSG, only three have come from outside the box. He can score with both feet and his head, making him a rounded attacking option.

Seven of Willian’s 19 goals have come outside the penalty area. He is clearly a threat, but is more a player who is more likely to try his luck from distance than get into the opposition box.

Lucas is a very talented player and is someone who has yet to reach the peak of his talent.

With his contract having two years to run, the Blues won’t pick up the bargain of the century, but it is possible they could agree a deal between £30-45million.

In the current climate, and the fact he cost £35million five years ago, it be a tremendous signing for all involved.