Brazilian winger Lucas Moura has been linked moves to the Premier League since he was a teenager. First, it was Manchester United who showed an interest in the burgeoning young Sao Paulo star, only to be out-priced by and pipped to his signature by Paris Saint-Germain.

Since then, as his PSG stay underwhelmed somewhat, the English top flight was mooted as a destination in which the gifted wide man could rebuild and develop into the player many thought he would become, rumoured to be a transfer target for Arsenal and Chelsea at different junctures.

Now, with his stock in Paris at an all-time low, Moura is finally seal long-awaited Premier League salvation, with Tottenham Hotspur completing a deal worth in excess of £20million for the 25-year-old Brazil international before the January transfer window closed.

Moura slid steeply down the pecking order at the Parc des Princes this season following the arrivals of Neymar and Kylian Mbappé, restricted to just 72 total minutes of Ligue 1 action across five appearances.

A chapter of his career that promised so much, signed for £33.5million in 2013, has fizzled out, but Moura's PSG spell was not without its bright spots, and the 25-year-old, now with a point to prove, could be an asset for Tottenham.

Spurs boss Mauricio Pochettino has been on the lookout for attacking additions for some time, struggling in recent years to find the right fit for the type of versatile, direct winger to supplement his attack.

Georges-Kévin Nkoudou and Clinton N'Jie both arrived to fulfil that remit but delivered little before being shipped out.

Harry Kane is, of course, the undisputed starter at the spearhead of the Spurs attack. And, while attempts to relieve the goal-scoring burden he carries with the signing of Vincent Janssen and Fernando Llorente have had little impact, the Englishman remains a reliable and consistent line-leader.

But there is no doubt Tottenham could use an extra option or two in the second line of attack.

Kane benefits from a stellar supply line thanks to the gifts of Christian Eriksen, Son Heung-min and Dele Alli, but Pochettino has few options at his disposal, especially in light of Erik Lamela's continual injury struggles, if he wishes to change tack. 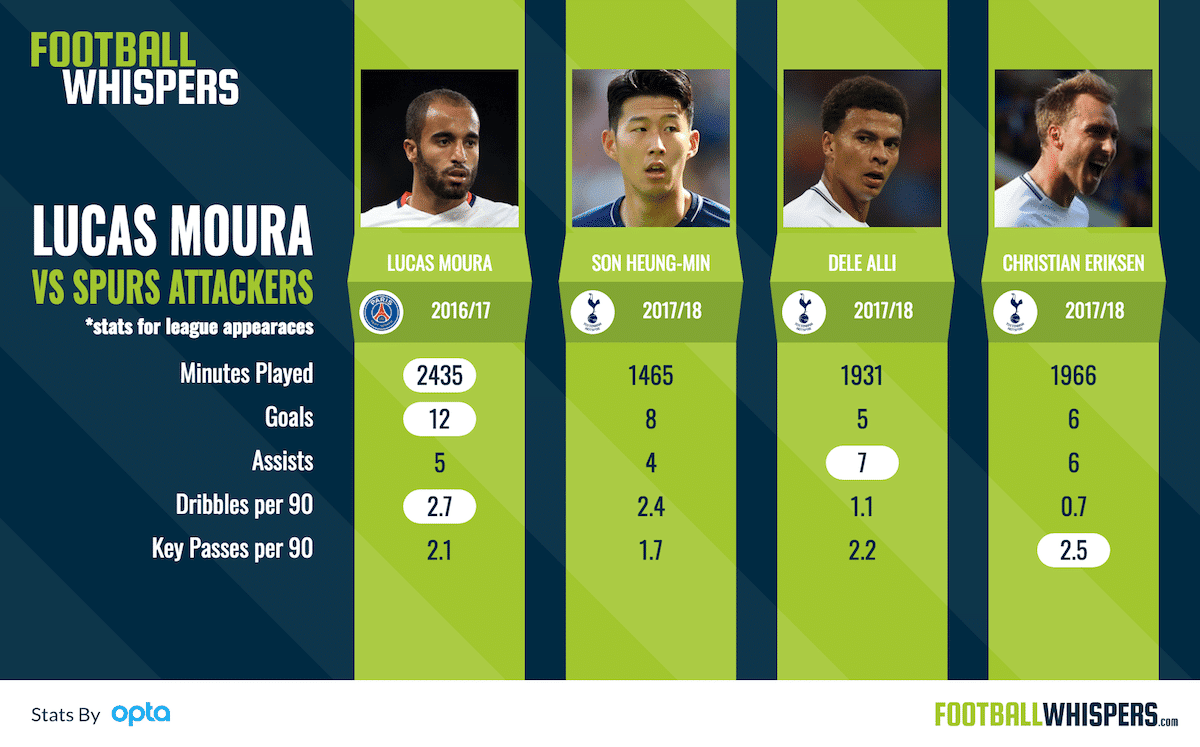 This is where Spurs have found real value in Moura. Had the PSG No.7 been earmarked for an immediate starting berth, as appeared to be the case with the rumours of Manchester United interest before the Red Devils signed Alexis Sánchez last month, there would have been serious doubts over his readiness to come straight in and improve the first XI.

But, in a role as a go-to option off the bench initially, Moura will be afforded the opportunities to stake a claim for a more involved berth, while also being allowed to assimilate to his new surroundings, without the pressure of being expected to revolutionise Tottenham's attack right from the off.

In terms of his skillset, Moura can be a real weapon for Spurs, too. In Eriksen, they have a savvy and considered creator; Alli offers thrust, link play and goal threat; and Son provides useful versatility, work rate and speed. Moura, while unable to match any of his positional rivals in their strong suit, can provide aspects of each, while also bringing raw pace, dribbling ability, off-the-ball movement and slick finishing to the table.

As the above graphic shows, Moura's statistics from last season, before PSG's most recent influx of superstars, were strong. The Brazilian, deployed most regularly on the right side of a front three, averaged an impressive 2.7 dribbles per 90 minutes and evidenced a fine degree of creativity with 2.1 key passes per 90.

His return of 18 goals in all competitions (12 of which in the league) was a career high.

Moura's ability to break ahead of the ball in the half-space will also give the likes of Eriksen another option to aim for when scheming in the attacking third.

Currently, the Dane is able to look for Kane centrally or pick out Alli's advancing runs in the middle. Son, while a threat on the counter and excellent with open space ahead of him, it could be argued, is not quite as adept as Moura at finding open yards in congested areas, against deep-sitting opposition.

He's far from perfect and will need time, patience and encouragement if he is to come anywhere near finally fulfilling his potential, but Moura can give Pochettino what he's looking for: another way to attack.