By the end of last season, Lucas Moura probably wondered if he'd made the right decision.

The Brazilian, used sparingly by Unai Emery at Paris Saint-Germain, jumped at the chance to join Tottenham Hotspur last January.

However, he struggled to make an impact for Mauricio Pochettino's side, starting just two Premier League games.

The Argentine coach, though, was being patient with the winger. Mid-season switches are always difficult and Lucas clearly required a bedding-in period. Pochettino and his staff continued to work with the winger behind-the-scenes, tailoring his abilities to suit the specific rigours of the coach's system at Spurs.

Lucas, Pochettino felt, needed to work on his off-the-ball work-rate, his positioning and his decision-making in the final third.

Fans often demand immediate fireworks but Pochettino knew this wouldn't be an overnight process. Like with Moussa Sissoko – who was castigated until he knuckled down to get himself back into Pochettino's good books – Lucas was a player-project that required time.

But, like with the Frenchman, who is enjoying a stellar season, it looked as though Pochettino's Lucas experiment was beginning to produce the desired results.

He finished the 2017/18 campaign with an eye-catching performance in the chaotic 5-4 win over Leicester City and, with him not participating at the World Cup for Brazil, was able to rest before enjoying a full pre-season.

Hard work during the summer months seemed to do the trick. Lucas opened his account for the season with a beautiful curling effort against Fulham before destroying Manchester United at Old Trafford, scoring twice in a performance which left Chris Smalling and Phil Jones crying in each other's arms.

Lucas won the Player of the Month award for August. Having barely featured during his first half-season at the club, his impact during the first few weeks of the current campaign made it seem as though Spurs actually had signed someone during the summer window.

Still only 26 and with a newfound killer instinct in the final third to supplement his searing pace, Spurs fans had bright hopes for him this season.

Unfortunately, while he has chipped in with more important goals, including away to PSV Eindhoven and Barcelona in the Champions League, the former São Paulo wonderkid now finds himself warming the bench, on the outside looking in after a downturn in form.

The problem is, having spent a year honing Lucas into a Premier League player, Pochettino still feels as though he can't trust him. Injuries and international commitments have meant the first-choice attacking quartet of Christian Eriksen, Dele Alli, Son Heung-min and Harry Kane have not played together in two months but, unfortunately for Tottenham, injuries to Alli and Kane coincided with Lucas' loss of form.

He has not scored or assisted in the league in 2019 and it's surprising to see him rank 25th in successful take-ons; for a player with his dribbling prowess, 1.54 per 90 has not particularly set the division alight.

Of course, opportunities have been thin on the ground, having played just 12 minutes over the last four games in all competitions, while seeing just 10 minutes across Spurs' double-header against Chelsea and Arsenal. 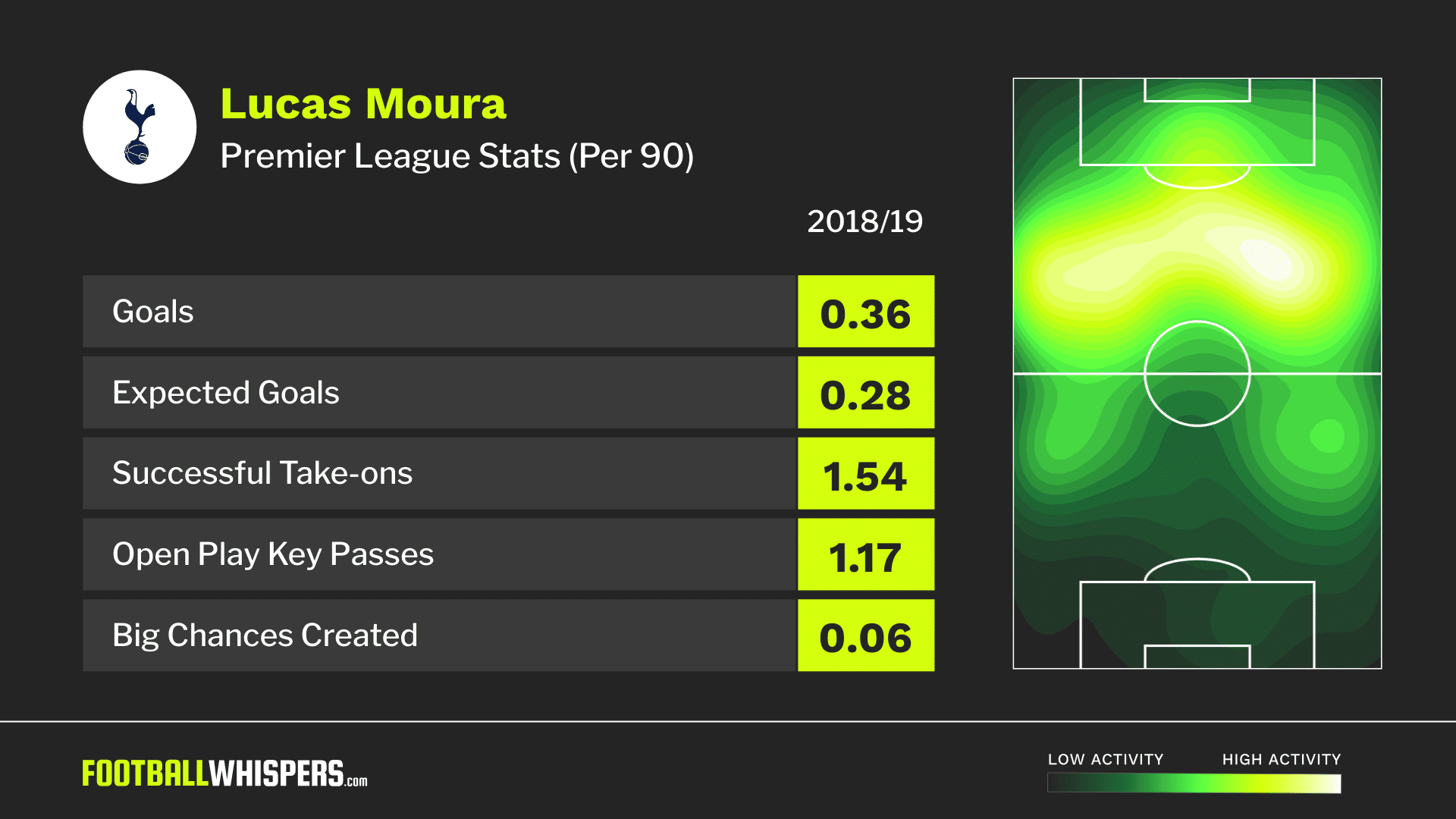 For the trip to Stamford Bridge, Pochettino deployed his familiar 4-2-3-1 with Érik Lamela preferred to Lucas alongside Eriksen and Son behind Kane. For the visit of Arsenal, however, he opted for a back three, with Kieran Trippier and Danny Rose at wing-back and Eriksen in behind Son and Kane up top.

Yet, with Spurs chasing Arsenal's lead for much of the game, it was telling that Pochettino turned to Lamela and Fernando Llorente, but left Lucas on the bench.

It certainly hasn't helped Tottenham's season. Their form in 2019 has been patchy; they exited the FA and Carabao Cups in the space of three days, lost at home to Manchester United, won four on the bounce in all competitions before picking up just one point out of a possible nine against Burnley, Chelsea and Arsenal.

It's been a strange season for Lucas. Anyone who watched him tear into Manchester United under the floodlights that night at Old Trafford knows how devastating an outlet he can be. But, like many mercurial wingers, he is a confidence player; and his has plummeted as the season has progressed.

Now, with Spurs having let United, Arsenal and Chelsea back into the race for third, Pochettino needs a fresh injection of ideas. Whether the Brazilian has the personality to haul himself out of his slump and be the one to provide it, though, remains to be seen.