It’s very easy to be cynical when it comes to the ongoing phenomenon that is the transfer rumour mill. Stories are flying in from all directions, players linked with clubs across the globe and often for ridiculous fees. Arsenal are not immune to this experience.

In the summer there were murmurs that Paris Saint-Germain’s pursuit of Neymar was all a smokescreen as they lined up a move for Alexis Sánchez.

As it turned out the Neymar interest was 100 per cent genuine, regardless of how unbelievable the fees involved were, and what's more they supplemented the Brazilian's signing with the acquisition of French wonderkid Kylian Mbappe.

Arsène Wenger was adamant that the Chilean would not be sold, and he stuck to his guns until the end of the transfer window.

Journalists in France conjured up a deal which involved the Gunners being offered the choice of two players in exchange for considering a move for Sánchez.

Nabil Djellit of France Football reported that PSG were hoping to help change Wenger’s mind with a player-plus-cash offer. The names on the table were Juventus transfer target Blaise Matuidi and Lucas Moura.

Matuidi went on to sign for the Italian champions, but Lucas remained at the club, leading to suggestions that a deal could still be done as early as January.

Arsenal have been linked with other wingers, including Thomas Lemar and Roma transfer target Riyad Mahrez, and the former Santos youngster fits the same profile.

Former PSG centre back, and fellow Brazilian, Alex, has advised his compatriot to join Arsenal, and reckons his former team-mate would be perfect for Wenger's side.

Lucas joined PSG in 2013 for £34million and has played 225 times for the club, scoring 46 goals and contributing 47 assists.

Despite his decent numbers, there is a feeling he has not fulfilled his full potential in Paris. And it can almost be traced back to an exact moment.

In 2014, playing against their bitter rivals Marseille at the Parc des Princes, Lucas picked up the ball inside his own half. In an instant he burst past one, two, three, four OM defenders. 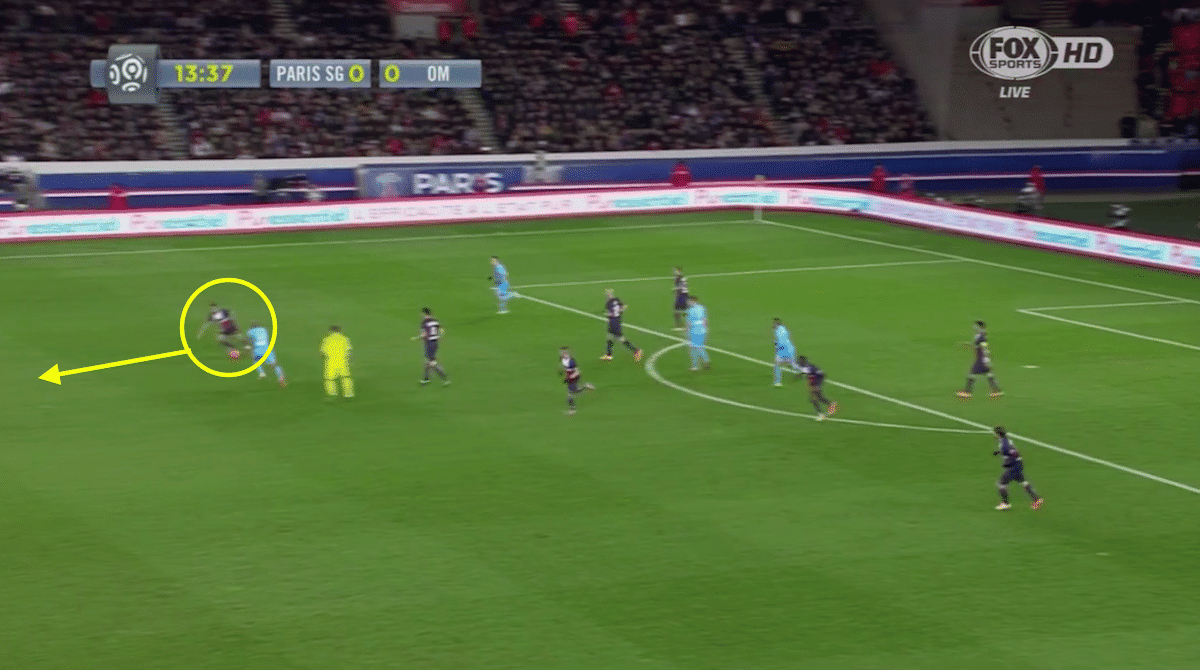 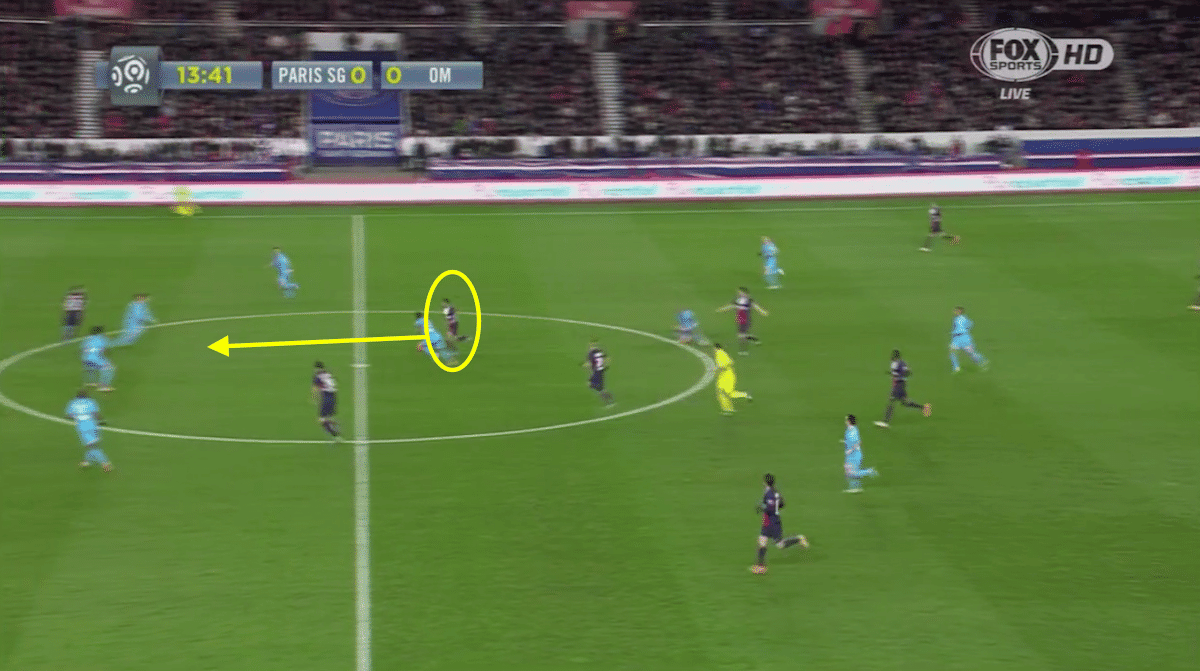 In about six seconds, he’d sprinted past the entire Marseille team and was through on goal with just the keeper to beat. The finish was cute, lifting the ball over Steve Mandanda, but just like the path his career has followed since that moment, it didn’t cross the line. 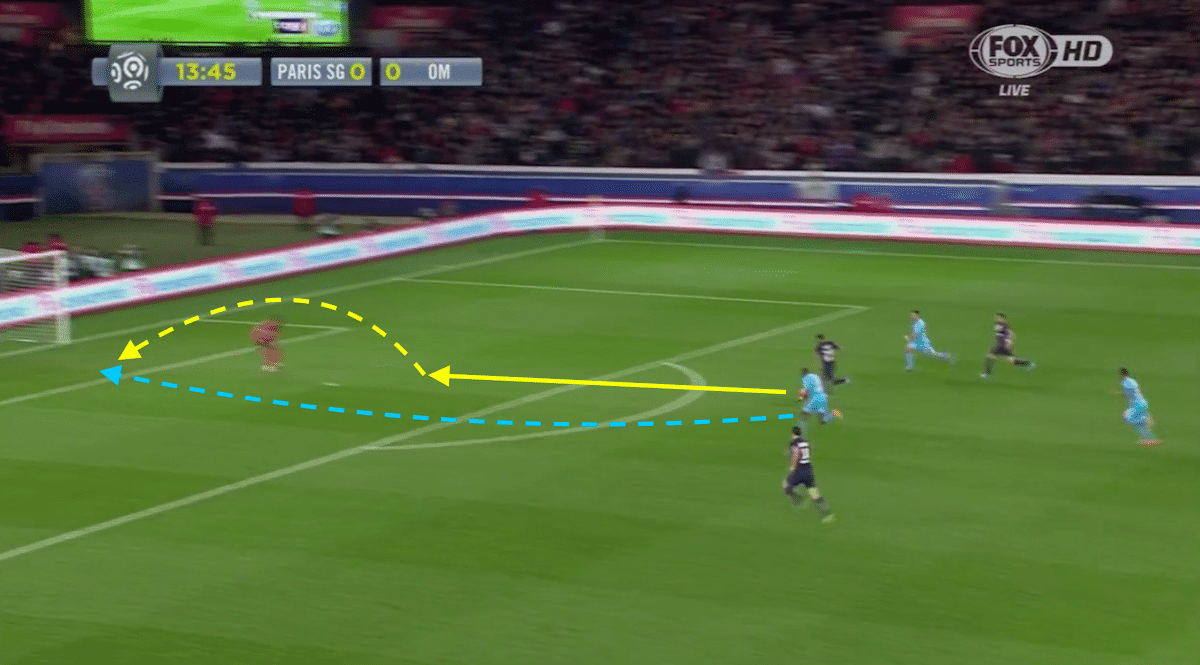 There wasn’t quite enough power to reach the goal, and Rod Fanni had enough in the tank to get back and clear the danger.

Lucas has shown improvement season-after-season, scoring zero, five, seven, nine, and 11 times in each of his five campaigns in France.

Where the Brazilian has improved and matured is his running without the ball. Rather than look to take on the world alone, he’s developed a trait of his pulling off blind-side runs in behind the defence.

In the images below, against St Etienne, as soon as Barcelona transfer target Marco Verratti picks up the ball in the midfield Lucas has his hands up making his intentions known. Very few players have the pace to keep up with the 24-year-old, so he can start early, speed past them and leave the defenders quaking.

It's those sort of passes that Xhaka has the ability and vision to pull off and would make a great partnership for the Gunners. 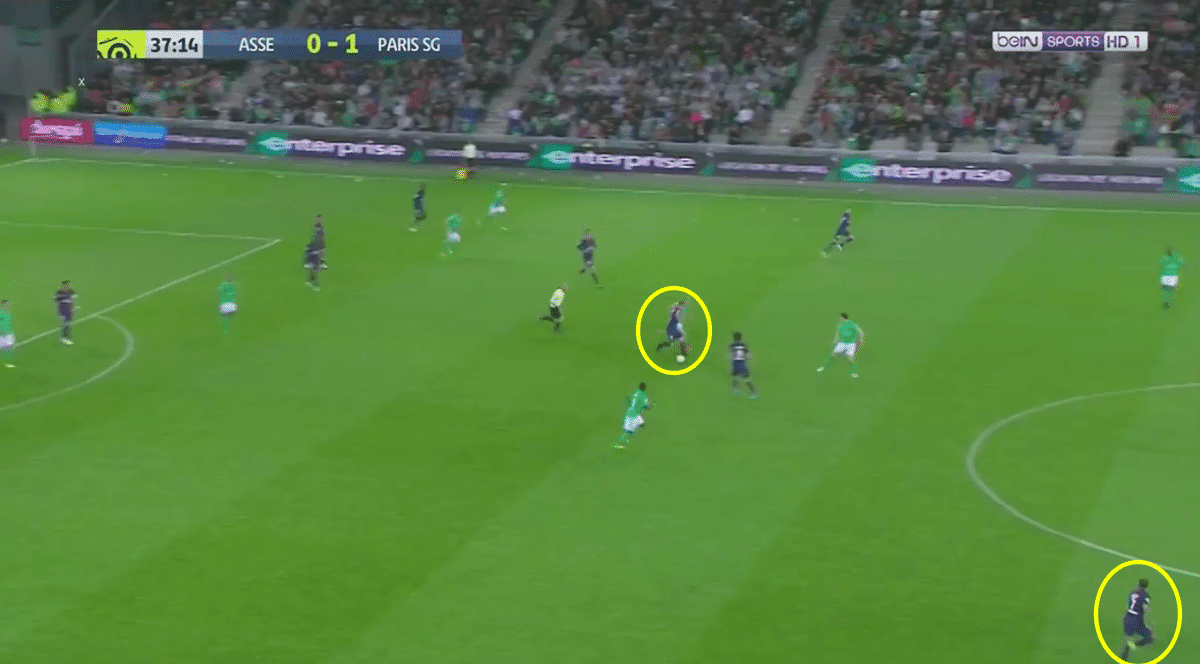 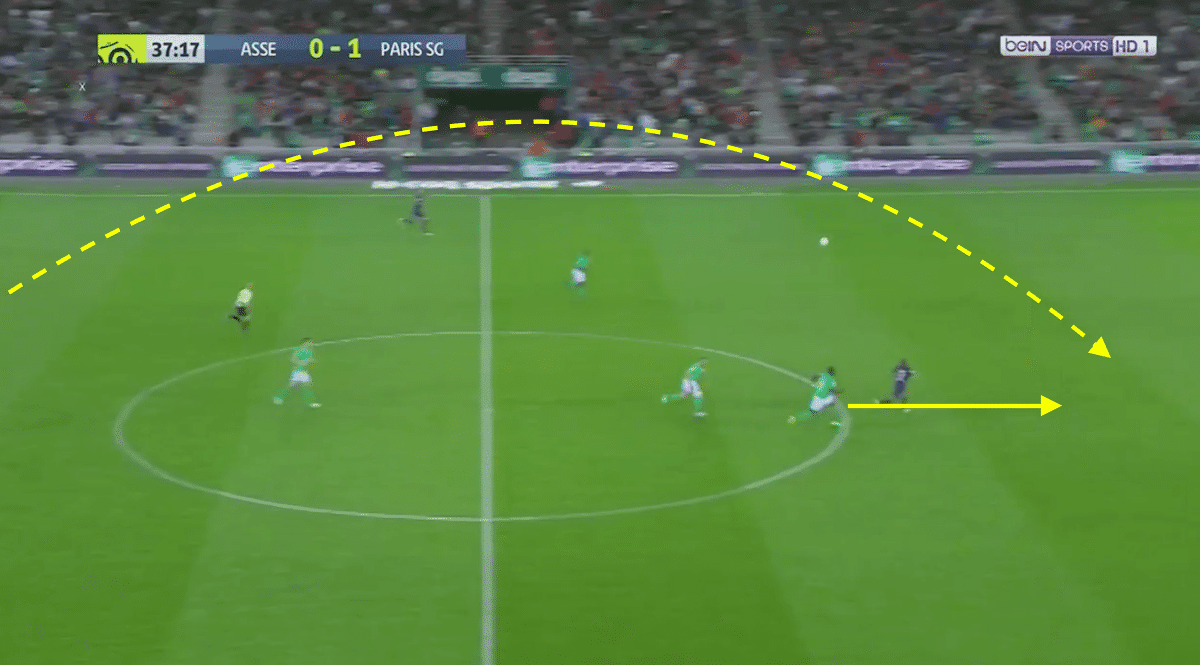 Once in possession, he has the ball under control and now, a couple of years older and wiser, he has the composure and strength to hold off the recovering defenders and finish. 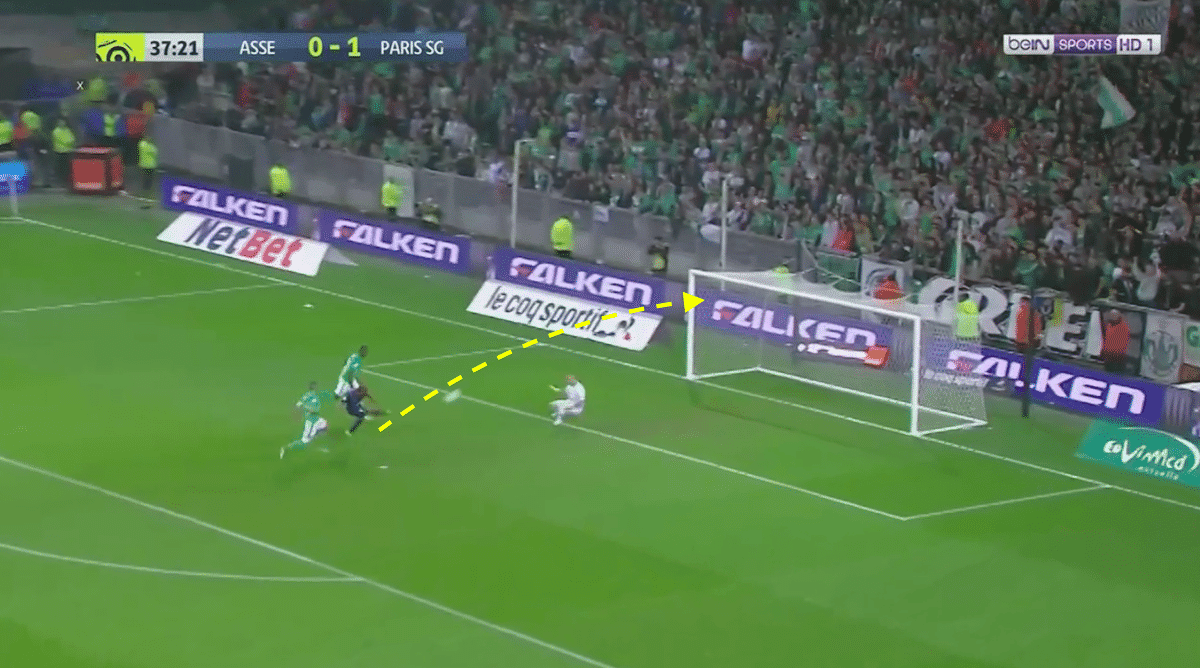 Faster than Arsenal's Theo Walcott – who, like Lucas, has been criticised for lacking a footballing brain – there is something between the ears. Last season, the Brazilian still attempted more dribbles per 90 minutes than the Arsenal man, completing more successful attempts too.

Defensively he contributes more too with 1.6 tackles won and 1.4 interceptions per 90. They both lose the ball just as much but, with 2.1 key passes to Walcott’s 0.6, he’s become more of a threat in the final third. 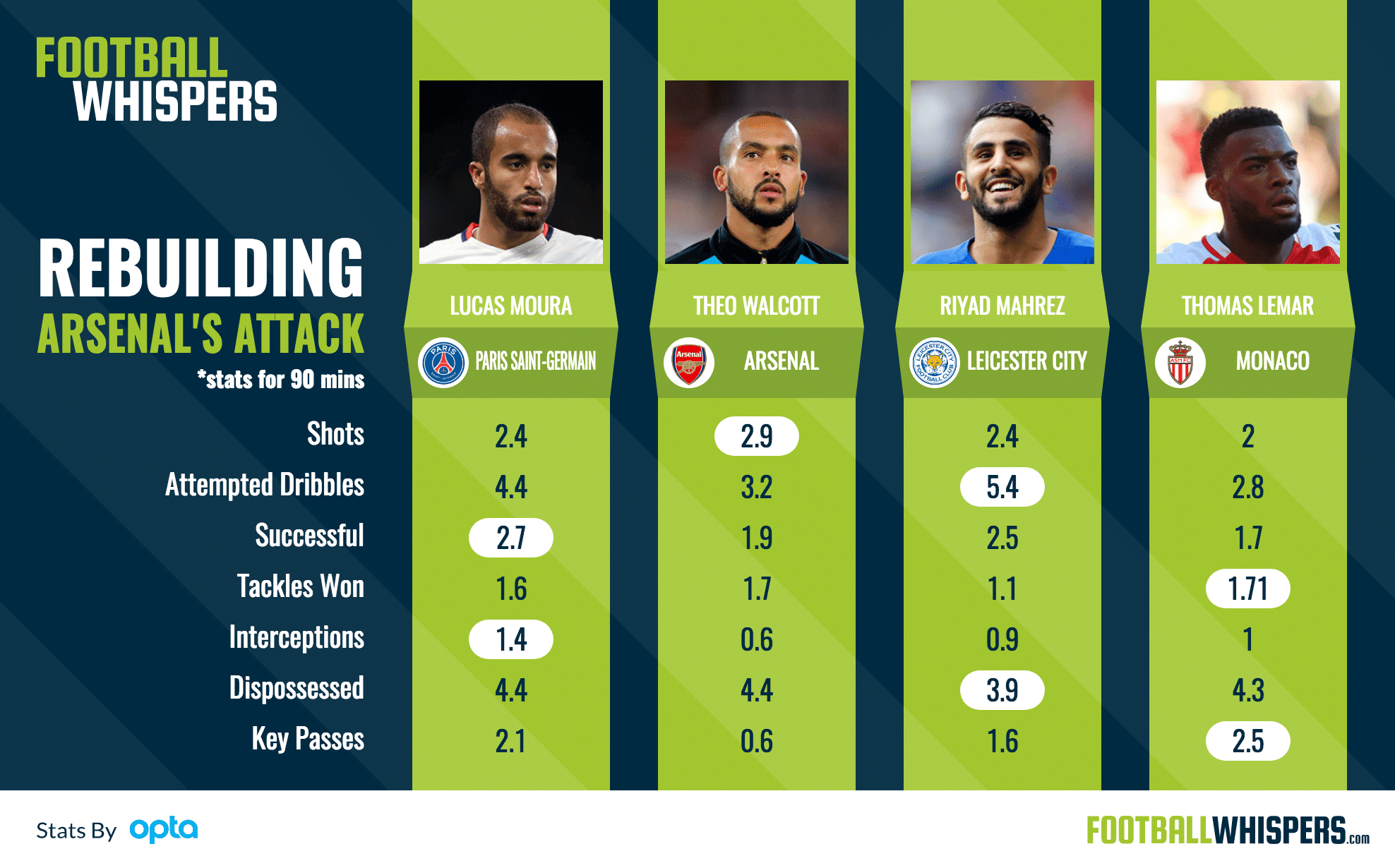 Able to play on the right-wing – he could fill in on the left too – Lucas would give Wenger flexibility and another option in the final-third. He’s become more than just a natural winger since his move to PSG; able to drift in from the flank, get on the end of crosses and find space in the penalty area to score goals from close range.

Compared to Mahrez and Lemar there are some things that Lucas does better. But in other areas they trump the Brazilian. For example, the Algerian attempts more dribbles, but Lucas completes more.

Altogether his defensive contributions are greater, which means a lot for a team like PSG who don’t face constant threats from the opposition.

Only Lemar makes more key passes but with superb passing his strongest point, a slight advantage is to be expected.

With better numbers in shooting and dribbling, and Arsenal desperately looking for an upgrade upfront if Sánchez leaves, taking a deal including Lucas could be a masterful piece of business.

Out of contract in 2019, and with Neymar and Mbappe arriving this summer, minutes in Paris are limited, and the Brazilian could push his career higher by moving to the Emirates to become part of Wenger’s latest revolution.