In the weeks following on from Newcastle United’s promotion to the Premier League the club were linked to a number of players. It’s nothing out of the ordinary with Rafael Benítez having to get his squad ready for the rigours of arguably the best league in the world.

But while fans are getting excited over Newcastle rumours suggesting Daniel Sturridge, Stevan Jovetic and Tammy Abraham could be calling St James’ Park home in the near future, it could well be what many consider to be an underwhelming link which is one of the most important ones of the summer.

According to the Northern Echo, Newcastle have enquired about the availability of Liverpool utility man Lucas Leiva. It was Benítez who brought the Brazilian to England way back in 2007.

Back then he was a long-haired attacking midfielder who was the youngest player ever to receive Placar magazine's Bola de Ouro, given to the best player in the Campeonato Brasileiro. The signing was considered a coup for the Merseyside club with the likes of both Milan clubs reportedly courting the player.

Fast forward a decade and Liverpool, now under the management of Jürgen Klopp, frequently use Lucas and his quiff at centre-back. It’s been somewhat of a metamorphosis for the Brazilian while at Anfield. The club have seemed to be in a state of perpetual transition for the majority of his career at Anfield and he’s had to adapt to survive.

He's been linked with moves away for a number of years with Galatasaray, Fenerbahçe, Inter Milan and former club Grêmio all showing an interest in the 30-year-old midfielder at various times.

However, just when it appears he's heading for the door a move is scuppered.

But with his career heading into it's twilight, now might be the time to make the move and reuniting with Benitez could suit all parties. The player himself hinted that his time on Merseyside was up when he delivered a speech after the 3-0 win over Middlesbrough on the final day of the season.

“It’s been an incredible 10 years, we all know it’s been a little bit like a rollercoaster: a lot of ups and downs,” he said.

“But I’m so proud to wear this shirt every day of my life.

“This club made me better as a person, as a player, I have two kids born in Liverpool. I don’t have one specific moment I’d say was a highlight, I think these 10 years have been a very good 10 years.

“So many good moments, and of course the support I’ve been getting is incredible.”

Why Lucas Would Be a Good Signing For The Toon

The current Newcastle squad lacks real experience in the top flight and Lucas, with over 340 games for Liverpool domestically and in europe, has that in abundance.

Benítez is reportedly desperate for reinforcements in the centre of midfield and has also expressed an interest in Lyon's Maxime Gonalons and Fulham's Tom Cairney. Lucas would be a cheaper alternative.

The report in the Northern Echo claims that the Magpies have “enquired about the availability” of the Brazilian, with the former Real Madrid manager earmarking him as an “experienced alternative” to Jack Colback and Isaac Hayden, both of whom are talented but lack that calm head at times which comes with experience.

If the Spaniard is to use the 4-4-1-1 formation he primarily used in the Championship then it's more than likely Lucas, when selected, would partner former Red Jonjo Shelvey at the heart of the midfield.

Shelvey could benefit from Lucas' presence both on and off the pitch. On it, the Brazilian's ability on the ball, as well as the threat he poses with his incisive passing from deep areas, would see the ex-Charlton Athletic man given a little more freedom to do what he does best – pull the strings.

His inclusion would also enable Shelvey to push further forward and impact proceedings in the final third.

The 25-year-old has matured a lot under Benítez and now looks like a much better all-rounder. A season or two beside Lucas would do him, as well as many others in the squad, no harm.

The 24-cap Brazilian is vocal on the pitch but you rarely see him screaming at teammates, instead he talks to them and it's perhaps why Klopp favoured him over Ragnar Klavan last season, and even named him as captain on occasion.

Liverpool signed Klavan from Augsburg last summer and upon his arrival the former Dortmund manager said he didn't sign him to be fourth-choice. Yet, for the most part, whenever Liverpool weren't able to name Dejan Lovren or Joel Matip in the starting XI they would turn to Lucas.

Then, when the Reds had injury issues in midfield, there was a re-jig in positions and Klopp again put his faith in Lucas. This in a side competing for a place in the top four. It tells you all you need to know about him when a manager of Klopp's calibre has no issues deploying him in a number of roles.

Off of the pitch he's the definition of a model professional. He looks after the younger, more inexperienced players and the influence he's had on Barcelona transfer target Philippe Coutinho can't be overstated.

Even some of the more experienced players, in terms of age at least, are relatively inexperienced when it comes to top flight football.

Matt Ritchie and Dwight Gayle, two stars from the cub's promotion campaign, are both 27 years old, yet the former has just the 36 Premier League games to his name and the latter has never started more than 12 matches in the top flight in a single season.

Could a move happen? 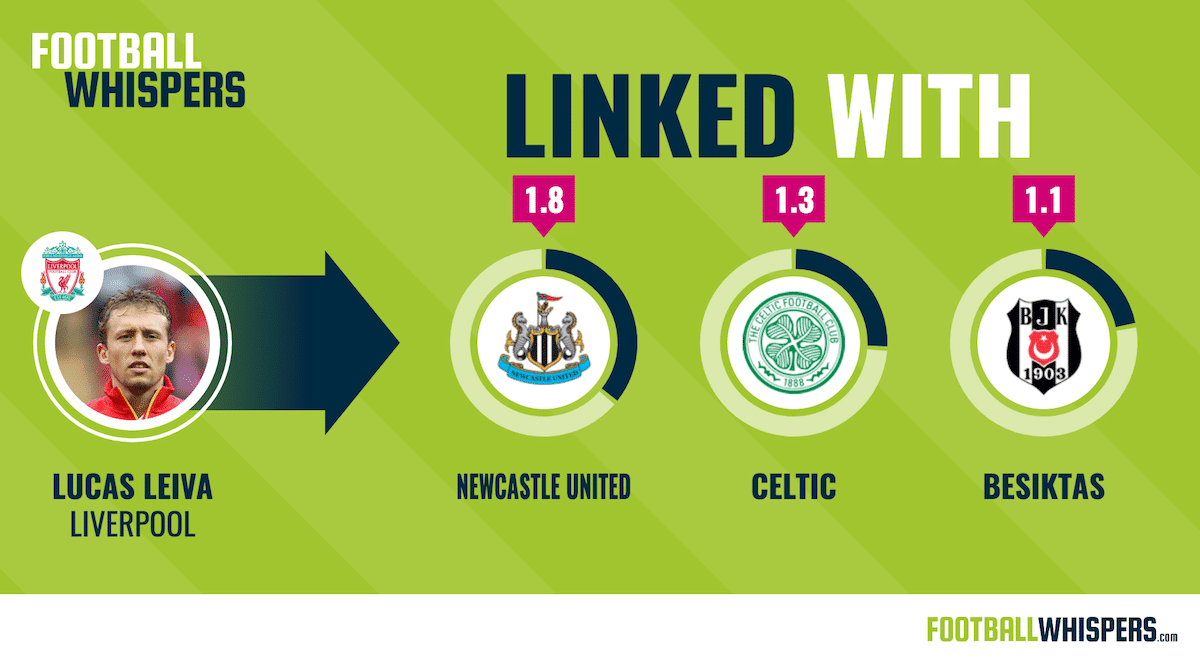 Despite interest from a number of clubs, Lucas could push through a move to be reunited Benítez, a man he credits with giving him the career he's had.

“We all know the relationship I have with Rafa, I don’t need to explain that,” he said, back in 2015 to the Independent. “If it wasn’t for Rafa I probably wouldn’t be here. Rafa was so important for me.”

It is suggested that, with one year left on his current contract, Lucas would cost around £4million – a bargain for a squad player in the current transfer market. He might not be the biggest or the best name arriving at Newcastle this summer, but he could well be one of the most important signings Benítez makes.