It went under the radar but Luca Connell could be one of the signings of the summer. Not just in Scotland, but across Europe.

The 18-year-old completed his move to Celtic from Bolton Wanderers with the Bhoys reportedly paying “substantially more than the financial obligations” in his deal to aid the League One club currently battling administration.

The figure is believed to be in the region of £350,000, a snip in the current market for a teen who impressed last season for a struggling side. He caught the eye of many and was called up by the Republic of Ireland only to be ruled out with an injury.

Connell made just ten appearances for Bolton in the Championship last term but did enough to be linked with a host of Premier League clubs. Celtic stole a march on rivals for his signature and he’s now the club’s second signing of the summer.

The Liverpool-born midfielder won’t get as much fanfare as powerhouse defender Christopher Jullien but, in the long-run, he could turn out to be one of the club’s best signings of recent memory.

The versatile teen shone as a central midfielder at Bolton, regularly dictating play with raking, cross-field passes. His go-to move was a switch of play from the left side of the pitch to the right wing area, and using his trusty left foot he tended to find his target with great frequency. 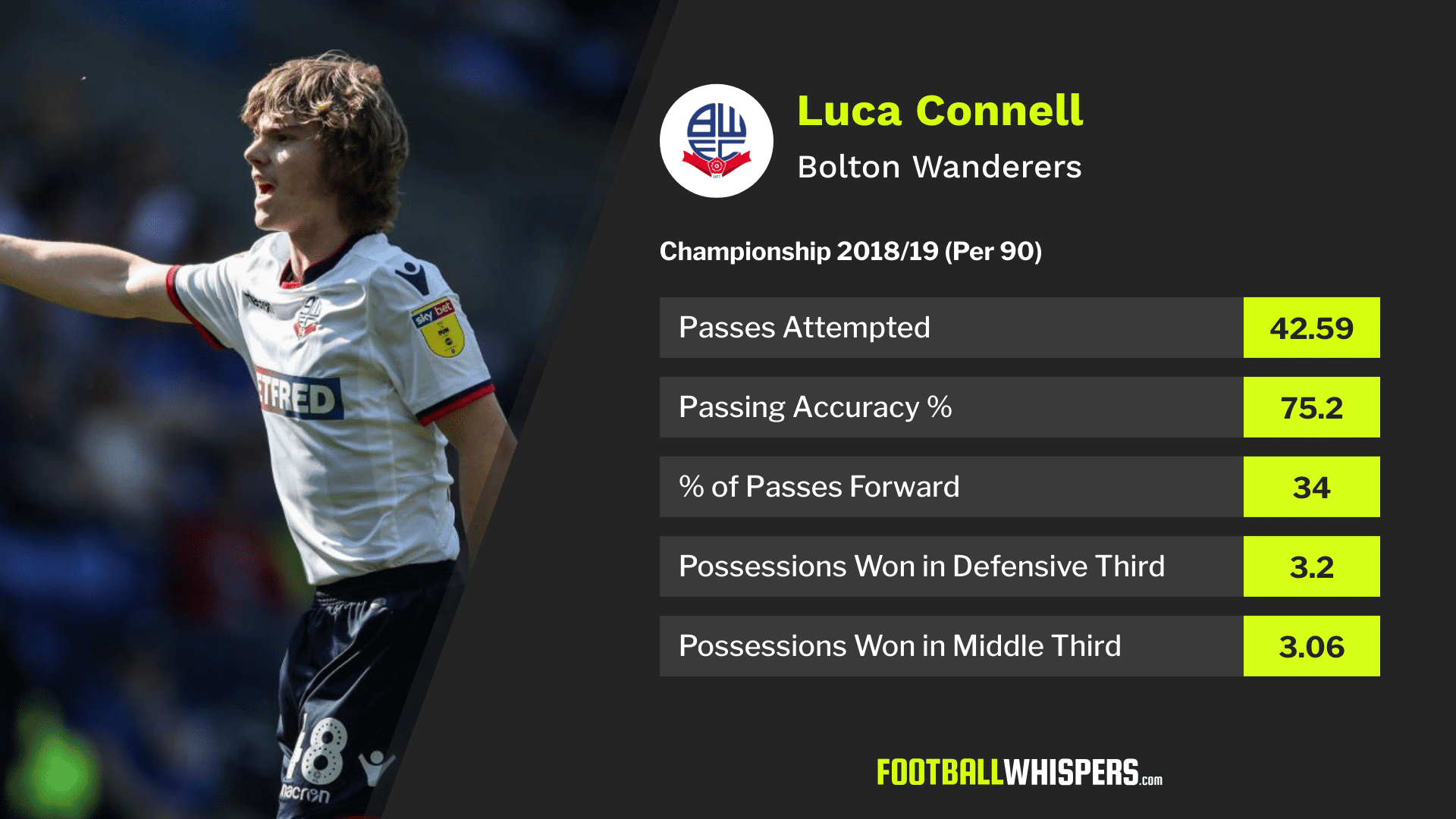 He was heavily involved in the limited games he did feature in, averaging over 40 passes per 90. Of those, 75 per cent of them found their target. It may not seem like a decent figure in an era dominated by midfielders completing 90 per cent of passes but he looked to be expressive as opposed to safe.

It's a trait that should be encouraged. A stat that marries well with that is Connell playing 34 per cent of his passes forward. It's indicative of how incisive he looks to be on the ball.

He's defensively switched on, too, winning possession back over three times in the defensive third as well as in the middle third. He could be a deep-lying playmaker, tasked with breaking up playing and starting attacks.

Alternatively, he could be the long-term replacement for Kieran Tierney. Celtic are believed to want £25million for their left-back with Arsenal and Napoli rumoured to be interested.

The Bhoys have been linked with full-backs to potentially fill that void but shrewd profiling might have lead them to realise Connell can be that player.

He's not an identical match to Tierney but he shares some characteristics with the 22-year-old. He's comfortable in possession and attempts 2.67 dribbles per 90, it isn't close to the 4.3 the Celtic man attempts but they're currently playing different roles so that needs to be taken into account.

Again, Connell doesn't match Tierney's crossing average of 4.54 but with his ability on the ball there's no reason his 1.8 crosses attempted per 90 wouldn't spike if he was used in a wide area.

The latest Celtic signing is used to being busy so could, eventually, get close to Tierney's 6.5 tackles and interceptions per 90. It won't be as easy as selling the Scotland international and throwing Connell in at the deep end but there's enough there to suggest, with training and patience, the former Bolton starlet couldn't become the starting left-back at Parkhead.

It would make the most of the youngster's ability on the ball, his desire when not in possession and the wand of a left foot he has. If the Bhoys get it right they could craft him into one of the most desireable full-backs in Europe. A ball-player capable of executing difficult passes and playing in central areas.

If this is the route they decide to go down then it's an ingenious, inexpensive way of replacing Tierney.