Champions League finalists don’t join Watford. But Roberto Pereyra did and, ever since signing, the perception has been the Argentine feels he is above this.

The 29-year-old was part of Antonio Conte’s Juventus side beaten by Barcelona in the 2015 final in Berlin.

He was no bit-part, by the way. No-one made more appearances that season than Pereyra’s 52. In a star-studded group which included Paul Pogba, Andrea Pirlo and Claudio Marchisio in midfield alone, Pereyra was integral.

That was the standard of player Watford were acquiring when they paid a club-record €13million to sign him in the summer of 2016 and, in flashes, his brilliance has been evident. His stunning solo goal against Huddersfield Town in 2018 (below) just one example of his capabilities.

Signing Pereyra was a statement of intent from the Hornets. But under Walter Mazzarri they went backwards and finished the season 17th. Knee ligament damage suffered by Pereyra just 13 games into his maiden campaign at Vicarage Road did not help matters but the former Internazionale boss was a bad fit.

In fact, long after Mazzarri was given his send-off, Pereyra struggled still. Marco Silva implemented a 4-3-3 system at the start of the 2016/17 campaign which looked tailor-made for the South American. The security offered by Nathaniel Chalobah and Abdoulaye Doucouré would enable the Hornets’ most creative player a freer role to roam.

But the system didn’t last and nor did Silva. Unconvincing as a No.10 and still reticent to fully commit in challenges following that knee injury, Pereyra’s was neither use nor ornament. Few would have mourned his departure.

That was until Javi Gracia came in. Appointed in January 2018 following Silva’s alleged infidelity, flirting with Everton while under contract at Watford, the Spaniard got more out of Pereyra than either of his predecessors.

Switching to a narrow 4-2-2-2 system with Pereyra drifting in off the left, the former River Plate youngster enjoyed his best season at Watford as the Hornets finished 11th in the Premier League and reached the FA Cup final.

A return of six goals and three assists was his best output but his work-rate noticeably lept up several notches under Gracia who managed to instil some defensive responsibility in him – notably more than in Gerard Deulofeu, the Hornets' other maverick. 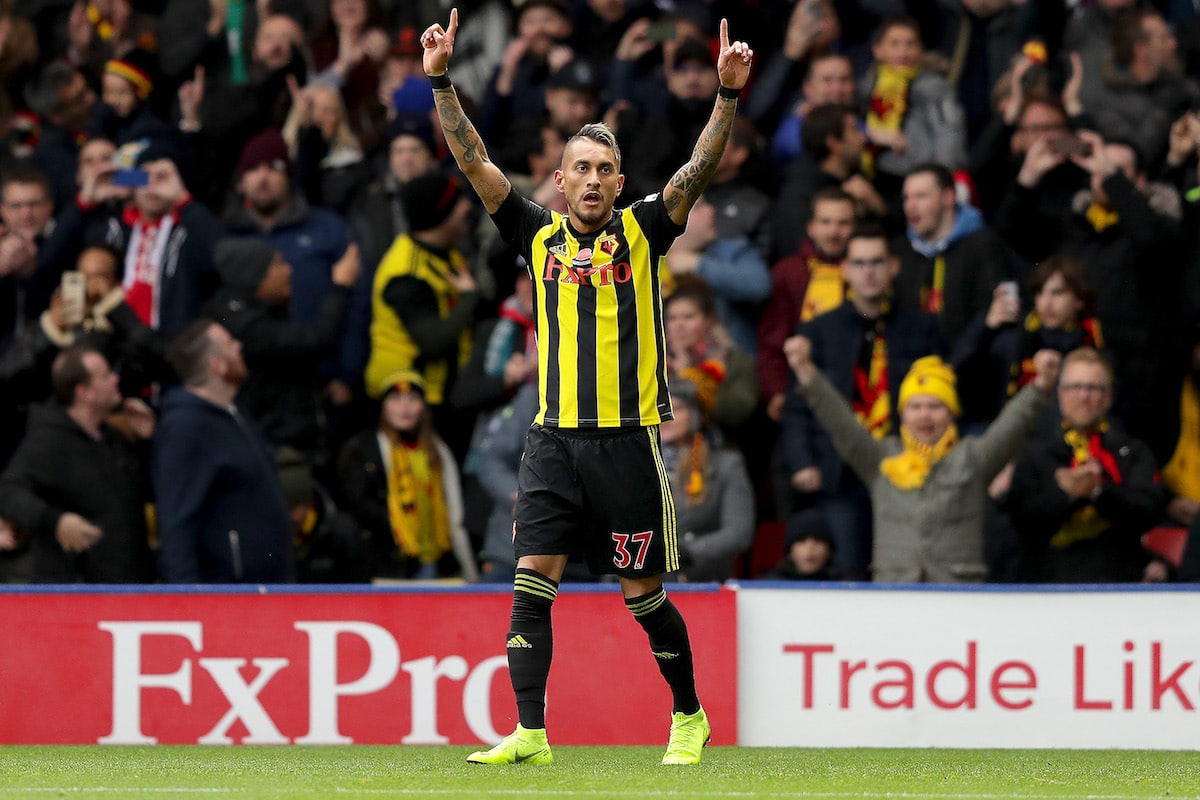 Pereyra's form resulted in a return to the Argentina fold, rubbing shoulders with Lionel Messi, Sergio Agüero and Angel Dí María – a further indication of his undoubted quality.

Yet he has found minutes hard to come by this season. Injury hasn't helped, but Pereyra has not found favour under Nigel Pearson yet either. Handed a rare start for the visit of League One Tranmere Rovers in the FA Cup third round, he scored but was largely ineffectual before being dismissed late on for an alleged kick. The red was rescinded but it would only have served to dampen Pearson's view of the performance of his senior players.

The feeling, it appears, is mutual. Speaking to Fox Sports in Argentina recently Pereyra said: “I have three years left on my contract, but in June I would like to change the air. It’s already spoken, so we’ll see what happens.”

According to Adam Leventhal of The Athletic, this is news to both Pearson and Watford. But it's far from the first time Pereyra has alluded to the idea of moving away from Hertfordshire. The question is whether now, having just turned 29 and with 18 months remaining on his contract, is the time for a parting of the ways. 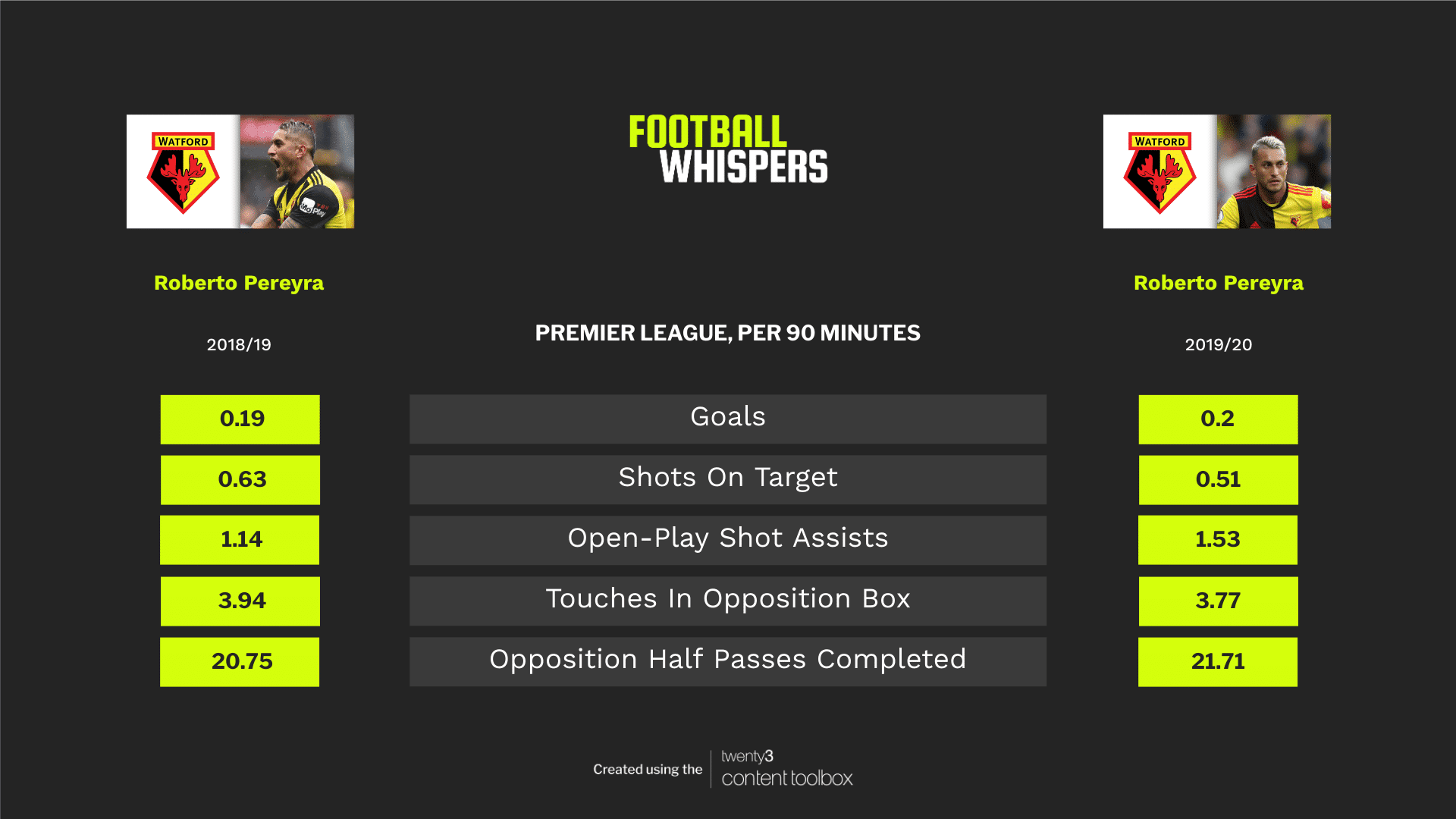 With Deulofeu and Ismaïla Sarr quickly establishing themselves as Pearson's first-choice wide players in his preferred 4-2-3-1 system, and Ignacio Pussetto signing earlier this week, where does that leave Pereyra?

Pearson has been as bullish as you might expect in his views. Asked for his reaction to the interview, he joked: “He might be going on holiday somewhere.

“He’s a very interesting character and I will just judge Roberto — as I will every player — on what I see when we’re training and playing. It’s more important for me that players show desire to play for us at any given time. It’s as simple as that really.”

Given all that you'd be forgiven for expecting Pereyra's underlying numbers to have dropped off. Yet the former Juventus star has actually seen an uplift in a number of his key attacking metrics.

Even his defensive work-rate has seen a spike. The number of tackles Pereyra averages per 90 has climbed from 0.73 to 1.2 while he is pressing with greater intensity, winning possession in the attacking third 1.22 times per 90 against 0.7 last season.

A goal in Saturday's potentially vital 3-0 win over relegation rivals Bournemouth will only serve to press home his case for a regular starting berth too.

Pereyra and Pearson could not be more juxtaposed. Take one look at the Argentine's hair, tattoos or the enormous cat-shaped speakers he brings to every home game and it's hard to imagine him being the new head coach's cup of tea.

But the pair might have to keep this marriage of convenience going until the end of the season if the Hornets are to stay up.