Lorient and Saint-Etienne meet for the second time in Ligue 1 this season in a match that could make or break each team’s chances of surviving relegation with eight games to go. Find out more about the Ligue 1 duel in this preview as well as free predictions by Football Whispers.

Free Predictions for Lorient vs Saint-Etienne by Football Whispers

Lorient and Saint-Etienne are currently locked in a survival battle at the bottom half of Ligue 1 table. Lorient is currently 16th while the visitors are 18th after last weekend’s fixtures. Here is how we have tipped these teams to perform this Friday.

Our second tip for Lorient vs Saint-Etienne back goals on both ends. Both teams have defensive worries ahead of this duel. Our second prediction goes ahead H2H stats which show that five out of the last 8 duels failed to register goals on both sides.

See the latest team stats, H2H and the best odds for this Ligue duel across selected UK bookmakers.

The battle for survival has started in Ligue 1 with eight matches to go. Both Lorient and Saint-Etienne are staring at an eminent drop unless the two teams come up with a working survival plan.

Lorient is 16th with 28 points, only a point ahead of 18th placed Etienne. Looking at the previous duels between Lorient and Saint-Etienne, we expect a difficult game. There last twenty encounters saw three games end in a draw. Within that time, Lorient bagged eight wins while Saint-Etienne had nine victories. Only three draws in the last twenty meetings, means a draw is the least expected outcome in this fixture if we premise our prediction on H2H stats.

One of the three draws was in the reverse encounter this season, so we look forward to a second meeting of the season between two struggling outfits. We could have another draw in this duel as both sides are wary of defensive struggles and will, therefore, avoid going too deep into the final third. 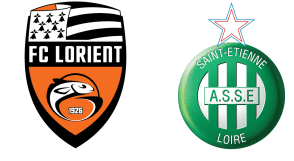 Where will Lorient vs Saint-Etienne Ligue 1 duel take place?

What time will Lorient vs Saint-Etienne game start?

How did these teams perform in their last five games?