With pressure mounting on the Portuguese coach to transform United's fortunes following a tumultuous season so far, fresh arrivals are expected during the winter transfer window.

Anthony Martial's resurgence has pleased Mourinho but the Frenchman needs support if United are to haul themselves out of mid-table mediocrity.

It has led to increasing reports that United will make an approach for Roma midfielder Lorenzo Pellegrini. According to Corriere dello Sport, the Red Devils are prepared to activate the 22-year-old's £26.6million release clause and offer him a contract which would double his current salary at the Giallorossi.

As per the report, Pellegrini's agent Giacomo Pocetta met United over the weekend. In response, Roma sporting director Monchi will offer Pellegrini a significantly enhanced contract to stay with the Serie A side.

Having earned nine caps for the Azzurri since his debut in June 2017, Pellegrini is evidently one of the highest rated talents in Italy, but is he what United need right now?

While there is certainly logic in pursuing Marko Arnautović, a proven Premier League matchwinner, Pellegrini's transfer would be fraught with risk. Barring a two-year spell with Sassuolo, he has never played outside of Italy. While some overseas imports have certainly hit the ground running in the Premier League previously, United's recent transfer history suggests that they require time in which to adapt to Mourinho's demands.

Fred, Diogo Dalot, Victor Lindelöf, Sánchez, Henrikh Mkhitaryan; the majority of United's recruits from foreign leagues under Mourinho have not hit the ground running. Pellegrini's transition would be even more intense if he arrived mid-season.

He is a player of considerable promise though. Having risen through the youth ranks at Roma, Pellegrini was signed by Sassuolo in 2016. After an impressive 2016/17 campaign, he followed manager Eusebio Di Francesco back to the Stadio Olimpico. Last season, predominantly operating as the mezzala in Roma's 4-3-3, he offered flickers of quality but struggled for consistency.

But the fact that he is accustomed to playing as part of a midfield three may explain Mourinho's pursuit. United have mostly lined up in a 4-3-3 this season with Nemanja Matić flanked by two other midfielders – usually Paul Pogba and one of Fred, Marouane Fellaini or Ander Herrera. Pellegrini's introduction to that system would offer dynamism, urgency and agility to a midfield that has often looked static and short on ideas this season.

Pellegrini's most impressive this season, however, came when he operated as the trequartista in Roma's 4-2-3-1 against city rivals Lazio. Having started on the bench, a 36th-minute injury to Javier Pastore offered Pellegrini the chance to impress from a central position. He scored Roma's opener and set up Federico Fazio for the third in a 3-1 win. 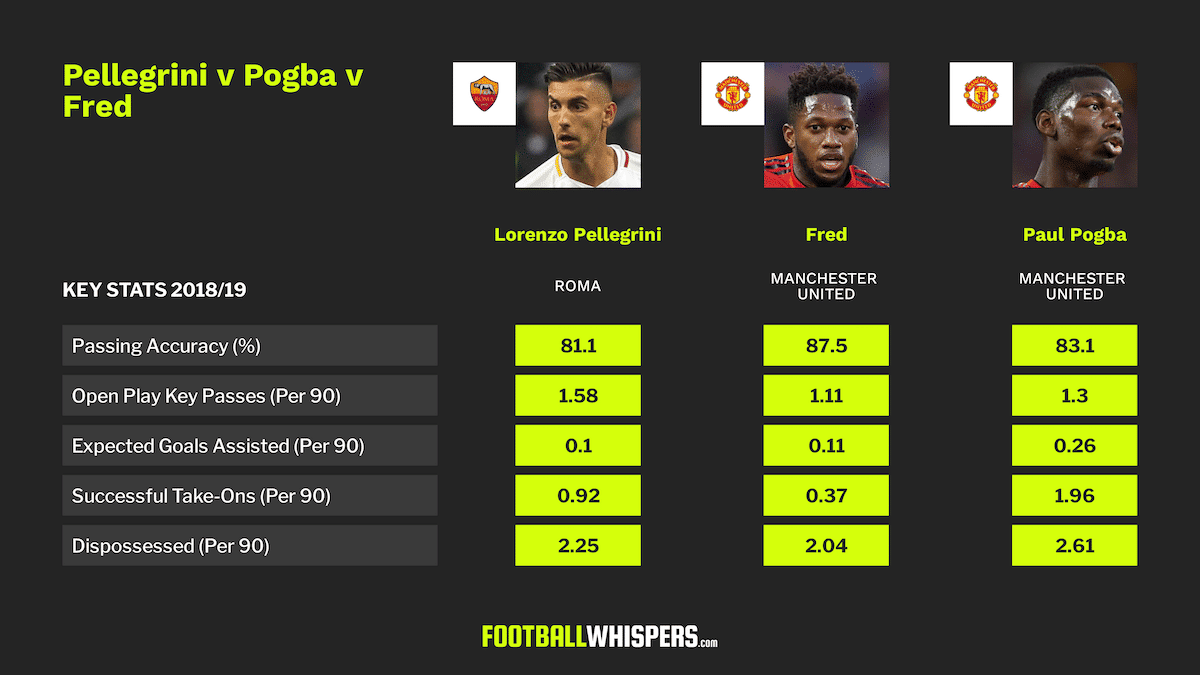 It prompted Di Francesco into a rethink. Having lost Radja Nainggolan and Kevin Strootman in the summer, Pellegrini had struggled to fill the void. The key has been moving Pellegrini higher up the pitch. Since the Lazio game, either as the trequartista or second striker behind Edin Džeko, Pellegrini has excelled with a goal and four assists.

His versatility and creativity in midfield are certainly attractive to Mourinho but, at 22, Pellegrini is still learning. While he has impressed recently, he has had long spells out of Roma's starting XI following ineffective displays.

Pellegrini represents an intriguing long-term prospect for United but, right now, in the midst of a challenging season, signing an up-and-coming midfielder from Serie A for close to £30million has the potential to backfire.