Ruben Loftus-Cheek is finally having his breakthrough season. With the talent he has it’s always been a question of when and not if this happens.

It took a move away from Stamford Bridge for him to show the Premier League what he has to offer, just like it has for many others in the past, but at least he’s finally getting minutes under his belt on a regular basis with Crystal Palace.

The Eagles are reportedly interested in bringing him to the club on a permanent basis, with manager Roy Hodgson reportedly exploring the possibility of signing him in the summer after Chelsea completed the signing of Ross Barkley.

“‘I'm pretty sure that if he's ever available for sale, we would certainly be in there with our hand up as one of the potential buyers” said the former England manager.

The 21-year-old is enjoying the responsibility of performing to a high level on a regular basis. He was awarded man of the match on his England debut against Germany but limped off against Brazil with the ITV pundits questioning whether his body was ready for the demands of regular, top-level football.

He put to bed some of those concerns by starring in yet another match. This time it was during Palace’s 2-2 draw with Everton. Though not playing in his more natural role in the centre of midfield, he managed to yet again catch the eye.

Hodgson was forced to tweak his system after an injury to Christian Benteke. In the Belgian’s absence he used Wilfried Zaha and Andros Townsend as a partnership in attack with Loftus-Cheek operating on the right hand side of the midfield four.

The former England manager clearly trusted the Chelsea loanee to fill in for Zaha on the right. For most clubs losing your leading striker is bad enough, but Palace also had to also contend with losing their most creative player from arguably his best position on the flank.

Yet Hodgson can feel justified with his decisions. After all, Zaha is leading the line well having scored two goals in his last three matches and Loftus-Cheek is flourishing on the right.

Only Oumar Niasse and Zaha finished the match at Selhurst Park with more completed dribbles than Loftus-Cheek. It’s rare for a central midfielder, especially an English one, to be so confident with the ball at his feet.

He finished the match with an 80 per cent pass accuracy after 40 of his 50 passes found the mark, two of which were key. He also won 75 per cent of his aerial duels. He also played a huge role in the opener and was involved in the second Palace goal.

This isn't to suggest he should be moved their on a full-time basis. When Benteke is back to full match fitness he should be the one spearheading the survival bid while Zaha should go back to running riot on the right. Or perhaps Hodgson could switch it up and play Townsend on the right and Zaha on the left.

Either way, Loftus-Cheek shouldn't be considered as a long-term right sided midfielder for any team. However, he's benefitting from playing in the role and it's something that will no doubt influence him when he's restored to the central area of the pitch.

A stint on the right helped Steven Gerrard evolve into one of the best attacking midfielders on the planet.

Short-term it looked like a waste but long-term it did wonders for him as a player and could well do the same for Loftus-Cheek. It helped him improve the timing of his runs, his positioning, his on and off the ball intelligence and, inevitably, his confidence when inside the penalty area. These are all things we're seeing in Loftus-Cheek's game over recent weeks. 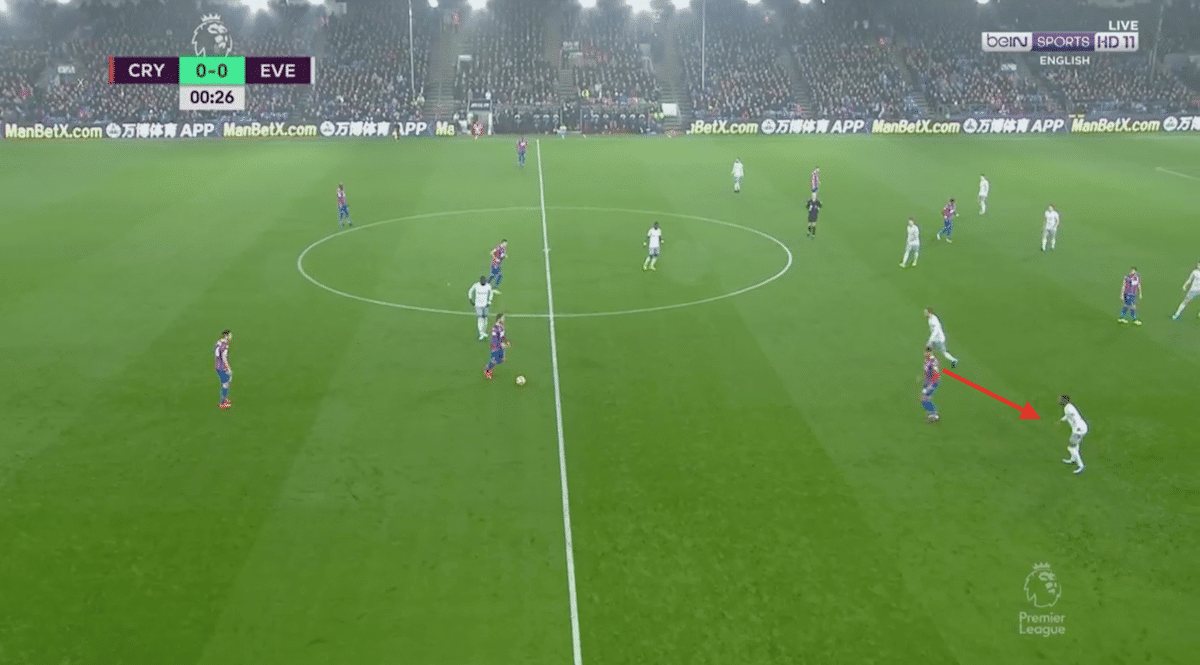 In the picture above you see the right midfielder tuck inside to help the Palace midfield. Unlike others, though, he doesn't drop deep to take the ball off of his Yohan Cabaye. He doesn't need to receive the ball under little to no pressure to then turn and face the opposition's goal – he's comfortable under pressure.

What's noteworthy here, however, is the fact he's scanning before the ball reaches him to help build up a picture. 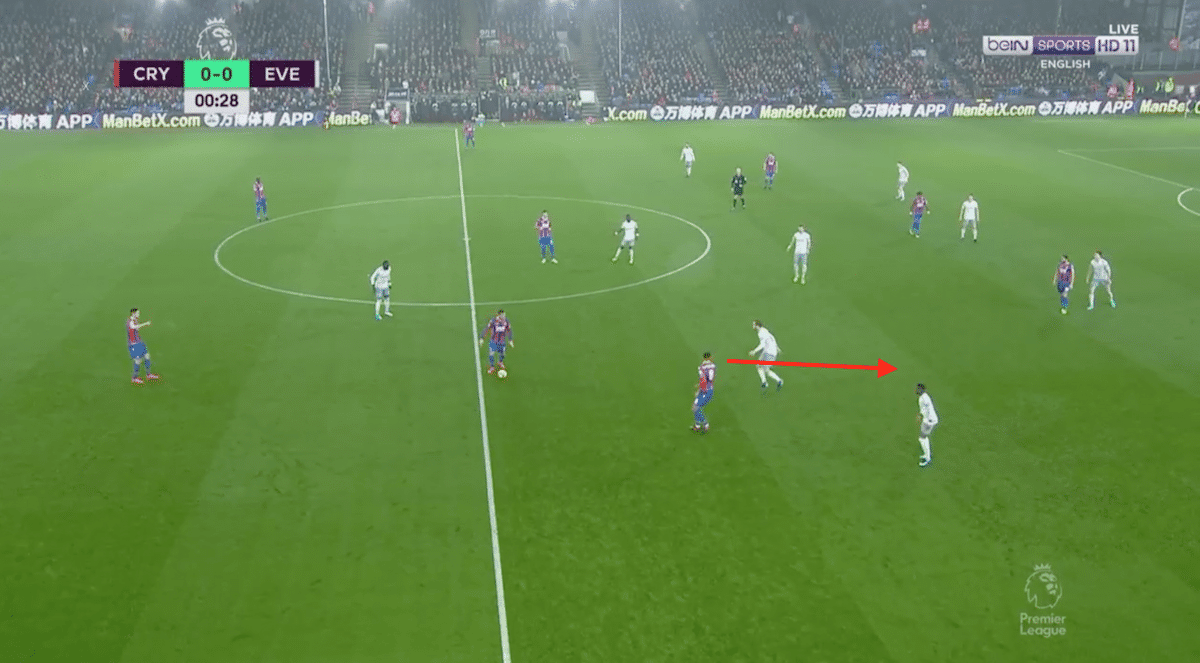 Just two seconds after looking to his left he checks over his right shoulder. He knows now who is around him, where the potential space is and what he's going to do when he receives the ball meaning he can be immediately be proactive and go through the gears. 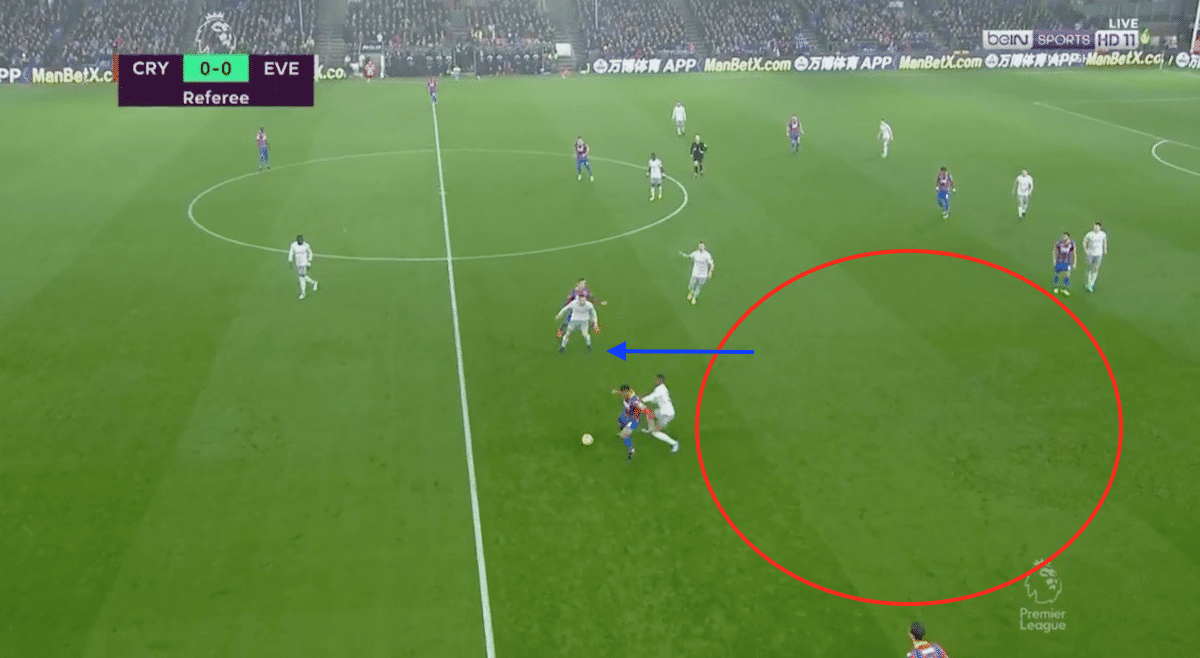 He knows as soon as his Cabaye is pressed that there's space to exploit because he'd already weighed up where the players had positioned themselves. Loftus-Cheek is also aware that to the Palace right there will be an overload. So, the 21-year-old positions his body to roll Ademola Lookman which enables him to get Palace onto the attack. 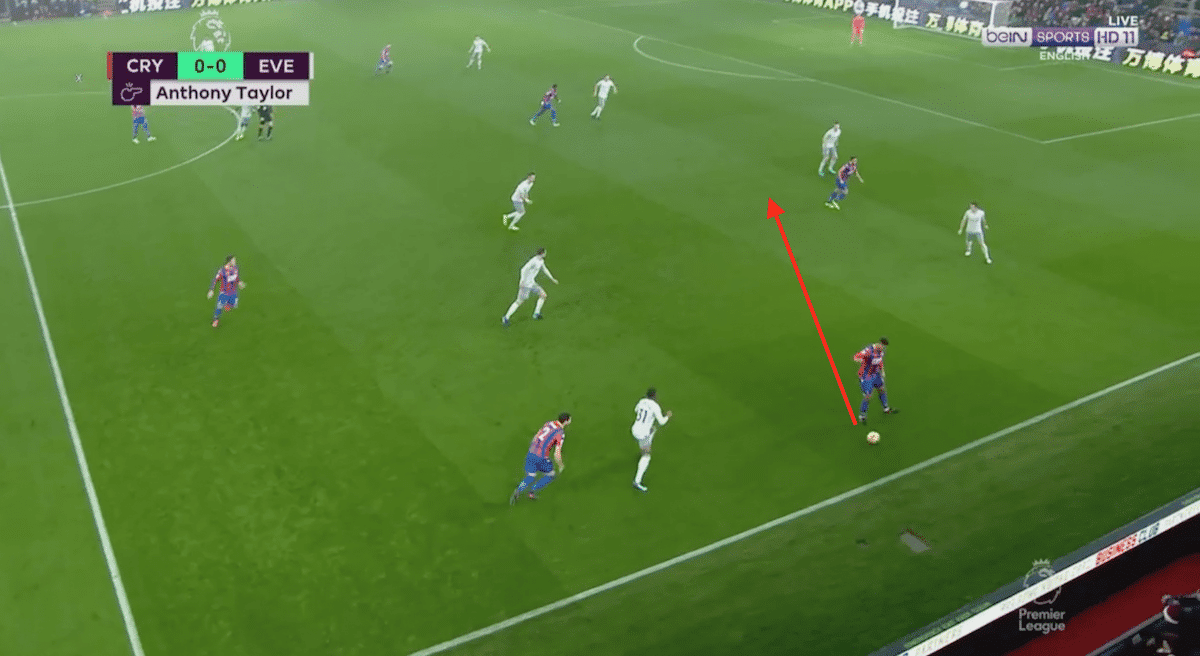 He exchanges passes with Joel Ward and attacks the space in behind Lookman and the rest of the midfield. He's able to pick the ball up, turn so he's facing Jordan Pickford's goal, and drive at the Everton defence. He eventually tempts Leighton Baines into committing before playing a pass to Townsend down the right side. 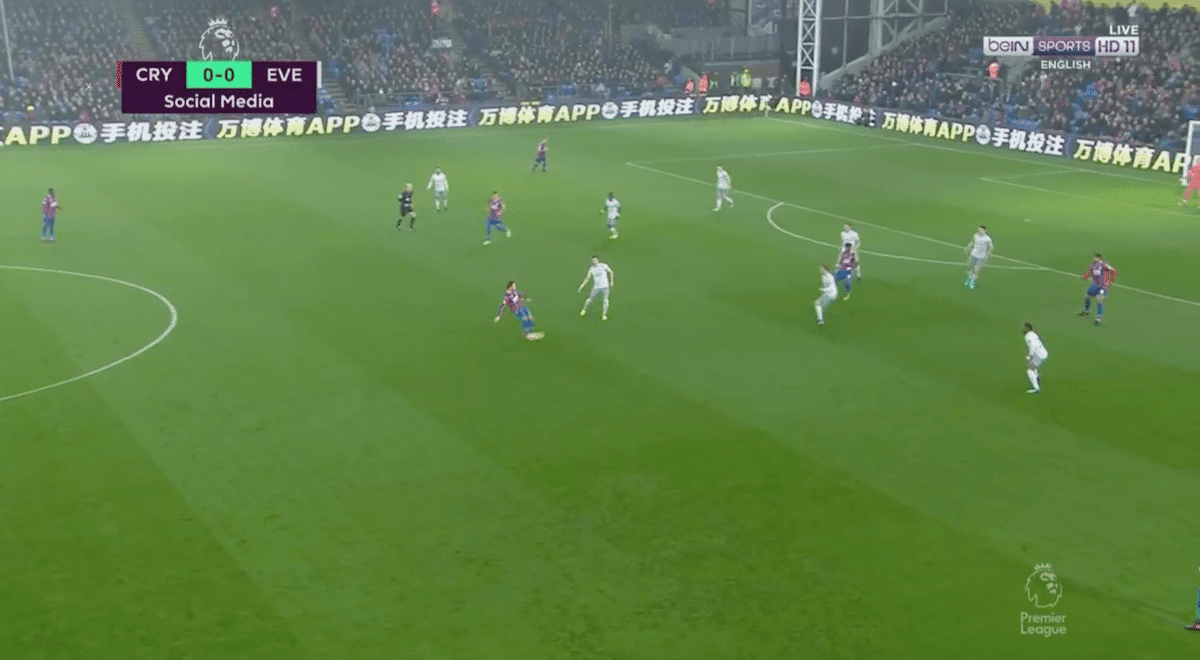 Townsend then holds his position on the right which allows Loftus-Cheek to drift into a central area which you can see in the picture above. He's intelligent enough to keep his distance from Michael Keane which allows Cabaye to thread a pass to him on the inside. He's composed as he powers into the penalty area and eventually gets a shot away which Jordan Pickford parries straight into the path of James McArthur.

If this is what he can do when starting from the right just imagine what sort of impact he'll now have as an attacking midfielder.

This off-the-ball movement and intelligent positioning could help him become one of the best midfielders in the Premier League. This is what separates the good from the great, one point from all three.

Palace are plodding along nicely since the appointment of Hodgson, what could really kickstart their season isn't the return of Benteke or getting Zaha and Townsend back into wide positions but, in fact, restoring Loftus-Cheek to the centre of the pitch.