After days of speculation, Steven Gerrard was confirmed as the new Rangers manager on Friday with the Glasgow club seemingly relying on the Liverpool legend's reputation to help them sell the project at Ibrox to potential signings.

It's been suggested Gerrard might use his connections at Anfield to sign a number of youngsters on loan. Ben Woodburn, Harry Wilson and Curtis Jones have all been mooted by the press but the most interesting name by far is Dominic Solanke.

The former Chelsea forward joined Liverpool in the summer after running down his deal at Stamford Bridge. It came as something of a surprise. Solanke made the move in order to get first-team football but he had Roberto Firmino, Divock Origi, Daniel Sturridge and Danny Ings ahead of him on Merseyside.

On paper it looked liked like a bizarre choice. The rookie wasn't going to displace any of the quartet. But Jürgen Klopp backed the youngster, agreeing to loan Origi to Wolfsburg and giving Solanke minutes over Ings and Sturridge.

His decision to move to Anfield was even more justified when the latter moved to West Bromwich Albion on loan in January meaning it was a straight shootout between the former Burnley forward and Solanke to be Firmino's deputy.

The 20-year-old has made 26 appearances in all competitions this term but has failed to open his account for the club. It's resulted in some fans declaring he's simply not good enough to be a Liverpool player. It appears for some that having patience with youngsters is a thing of the past.

But his underlying numbers paint a different picture of the player. 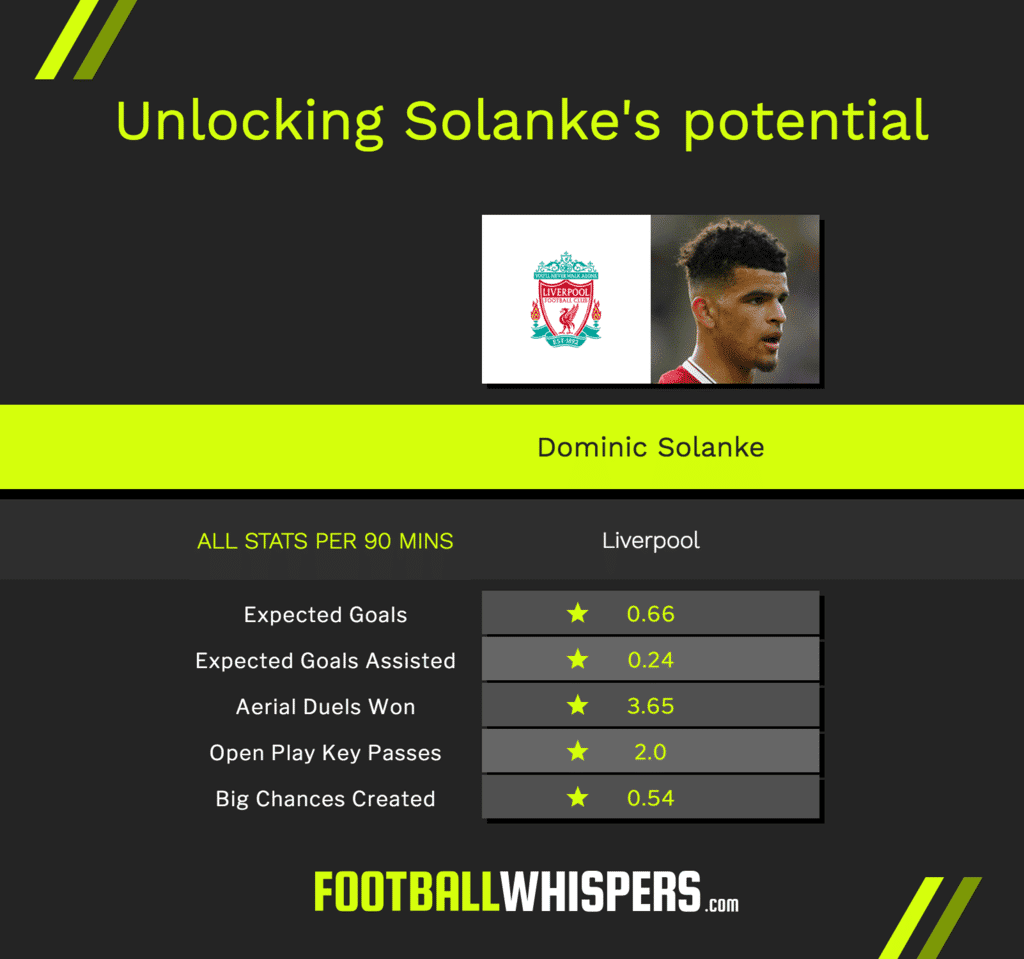 For context, he's only played 493 minutes in the Premier League this term so it's not the largest of sample sizes. However, his expected goals per 90 tally of 0.66 shows he's a player who regularly gets himself into goalscoring positions. Only Mohamed Salah has a higher xG90 total, though he's managed it over a sustained period and that needs to be taken into account.

His xA90 (expected goals assisted per 90) tally of 0.24 shows that he's also creating high quality chances for team-mates. His all-round play is good and he's not just someone who relies on others to create for him. It's backed up by two open play key passes per 90 as well as the 0.54 big chances he creates.

Not only can he run the channels and drop deep to link play with the midfield, he can also act as a target man and, on average, wins 3.65 aerial duels.

All of these numbers suggest he's a goal threat. A loan move to a club where he'd be playing regularly could help him fulfil that potential. After all, strikers, more than most players, rely on momentum. Cameos off the bench aren't what a 20-year-old forward needs at this stage of his development. 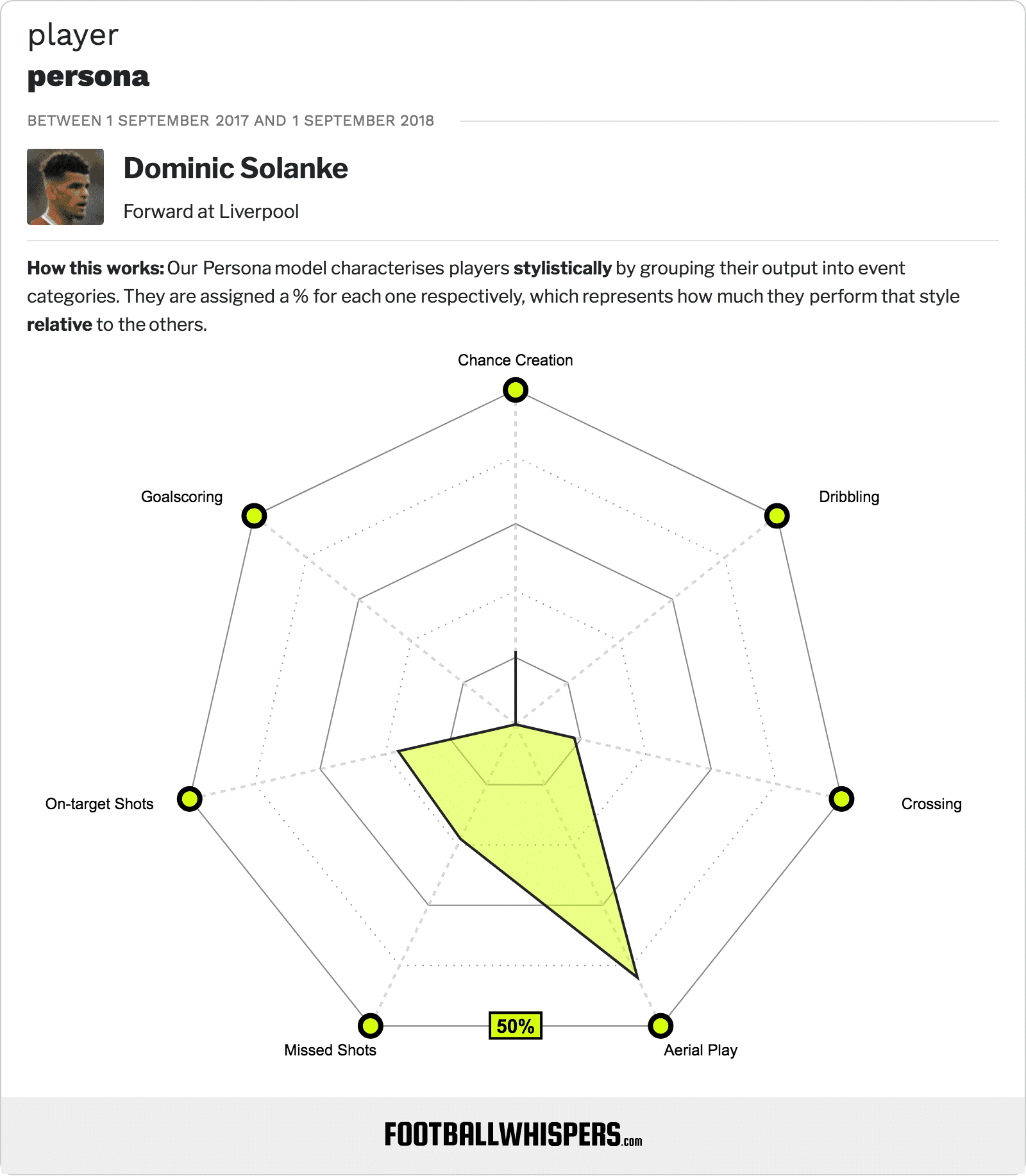 The Football Whispers play persona, which looks at the style of a player, suggests he's destined to score goals if an attack is built around him. But he needs practice and he needs experience.

His total xG for the season stands at 3.63 but his post-shot tally – a stat which looks at where the shot goes on target to see whether or not a player is adding value to their efforts – is down at 1.4. Though he's an elite chance-getter, he's not a finisher just yet and that's why a loan would be best for the England international.

If Gerrard looks to replicate the style he used with Liverpool Under-18s then Solanke could be an ideal fit. The design of the system sees the wide players work the ball into the penalty area for the striker(s). For this to work the Gers will need someone to not just partner Alfredo Morelos, but to replace the Colombian if he is injured.

Finding someone as good as the former HJK forward would be difficult for most clubs who have a limited budget. But, according to therangersreport, Solanke's xG90 is slightly better than Morelos' (0.63). It's not as simplistic as saying that makes the Liverpool forward just as good as the Rangers hotshot but shows he can be just as much of a threat.

It could be a perfect move for all parties involved. Solanke get's the starts he desperately needs, Gerrard gets a player who, on paper, is perfect for the system he's been using at Liverpool and the Reds, in theory, get an improved player for the 2019/20 campaign.