Chelsea have been linked with above for Swansea City's Fernando Llorente since January, with manager Antonio Conte keen to reunite with the player his signed for Juventus back in 2013.

The Premier League champions, seeking an alternative to Michy Batshuayi as a back-up to Álvaro Morata, were expected to land the 32-year-old target man before the transfer deadline passes.

But Sky Sports claim that, out of nowhere, Tottenham Hotspur have stolen a march on their London rivals, agreeing a fee with Swansea for the 2010 World Cup winner.

The Football Whispers Index, which utilises a unique algorithm to score transfer rumours out of five based on validity, has Spurs at 4.7 favourites, with Chelsea's chances of landing the striker at 2.8.

Standing at 6ft 4ins and powerful in the air, the Spanish striker offers a style of forward play than neither Spurs nor Chelsea have at their disposal currently.

But Llorente is not necessarily an obvious stylistic fit for either side. We've taken a look at which team suits the former Athletic Bilbao striker best.

Whether he ends up calling Wembley or Stamford Bridge home this season, Llorente's role will be a supportive one, backing up either Harry Kane or Morata, the respective clubs' established first-choice No.9s.

One thing the Swansea man offers that neither Kane nor Morata brings is aerial dominance. Both are good headers of the ball, but Llorente is an altogether different proposition when contesting aerial duels.

Indeed, of all the Premier League striker's with 20 or more appearances to their name last season, only Christian Benteke and Sam Vokes could top Llorente's return of 5.7 successful aerial duels per 90 minutes. 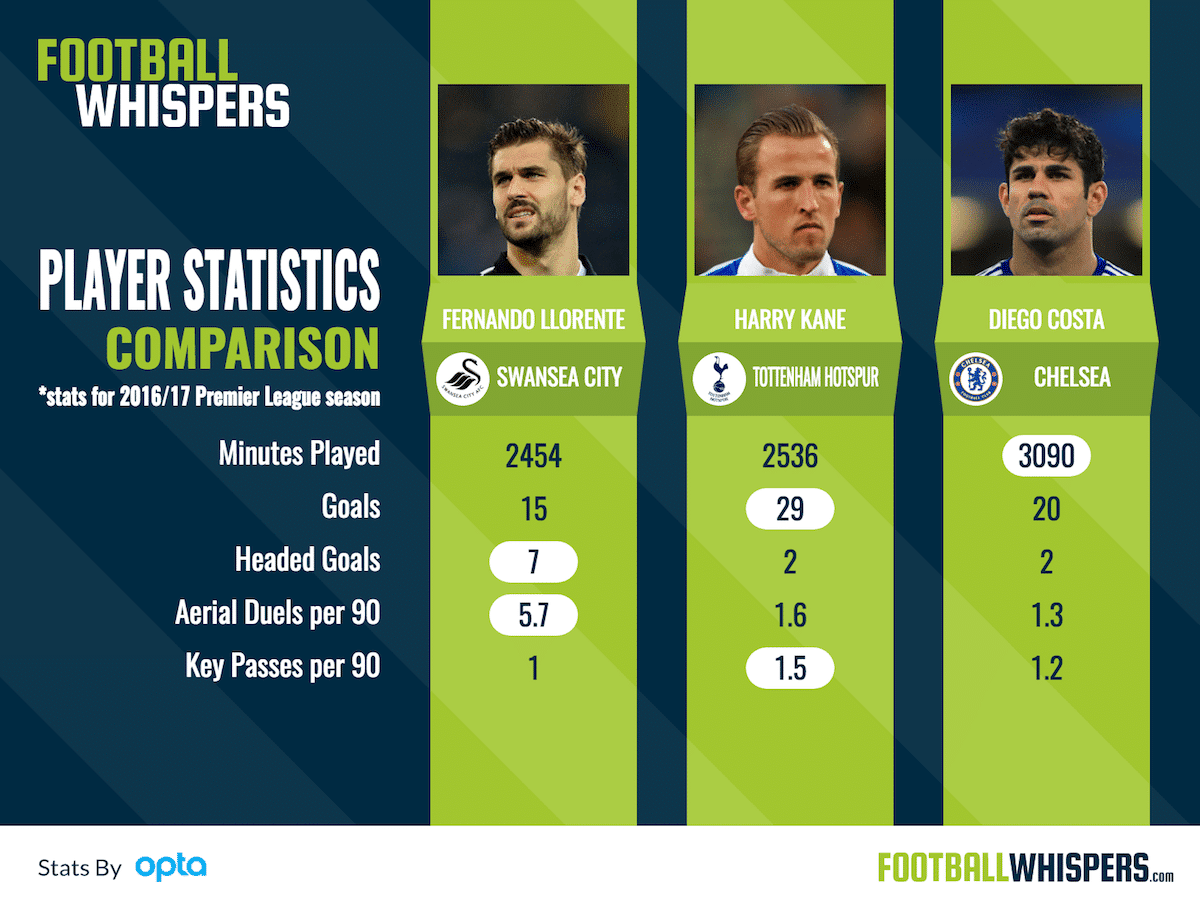 Adding Llorente would make both sides more of a threat from crosses and set pieces, and gives the option of playing long and direct up to the Spaniard as a target man.

But Llorente is far less creative than is required of the centre-forward in Mauricio Pochettino and Conte's systems. Last season, he averaged one key pass per 90, while Costa made 1.2 and Kane 1.5.

While Llorente's physicality and ability to hold up the ball could see him act as an effective focal point in Chelsea‘s 3-4-3, putting himself about and backing into opposing defenders as Costa did so well, his lack of pace and mobility means he might struggle in Spurs' high-pressing unit.

Dutch striker Vincent Janssen, signed from AZ Alkmaar for £17million last summer, suffered from a similar lack of mobility up front for Tottenham last season, so it is slightly curious that Pochettino is in the market for a player of Llorente's style.