Liverpool‘s pre-season has been one to forget.

Things started to look up as soon as Roberto Firmino and Mohamed Salah rejoined the squad after their extended summer breaks, however.

Liverpool powered past Lyon despite going a goal down early on in their final rehearsal before the new season got underway.  Firmino, who usually comes back after pre-season looking a little sluggish, appeared sharper than ever before.

His goal against the Ligue 1 side in Geneva wasn’t one you’d expect to see in what was his first start of the season. He showed intelligent movement and his finish, on his weaker foot, was efficient as he demonstrated his goalscoring instincts in the penalty area.

The Brazilian carried that form into the Community Shield tie against Manchester City, too. Alongside Salah, the pair looked at their rampant best both with and without the ball. It’s come as a surprise to many fans with both players usually needing time to adapt after coming back into the team.

On another day, the Reds romp to victory over the Premier League champions. Jürgen Klopp's charges responded well to going a goal down to carve out chance after chance at Wembley. Salah was unfortunate not to get on the scoresheet with efforts cannoning back off the woodwork and being hooked off the line.

It was an eye-opener and it sent a resounding message to their rivals in the English top-flight; Salah is as hungry as ever and Liverpool’s rustiness in pre-season shouldn’t be read into.

Klopp’s team had more shots, more possession and they managed to press City into uncharacteristic mistakes.

The first opportunity presented itself inside of five minutes. Pep Guardiola is often lauded for his innovation and his use of the new rule with regards to restarting the game from a goal kick is one many are talking about.

But in the example above Liverpool force the Citizens into playing it long having pressed aggressively and the sequence ends with Firmino firing an effort goalwards.

City managed to play through the press at times and people tend to concentrate on those moments instead of the above. In only their second start since returning, Salah and Firmino played an instrumental role in turning possession over in a dangerous area and managing to get a shot on target off a City goal kick.

Not only does it show they're physically switched on, it highlights just how mentally aware they are to be able to execute these pressing triggers with such ease and effectiveness.

Liverpool are famed for their press but when they came up against City last season, Guardiola figured out how to nullify it. Yet in the Community Shield, the Reds created transitional moments on numerous occasions which then resulted in shots on Claudio Bravo's goal.

It was nothing more than a glorified friendly but Klopp and his coaching staff will no doubt take a lot from the fact their players managed to turn their rivals over in key areas. 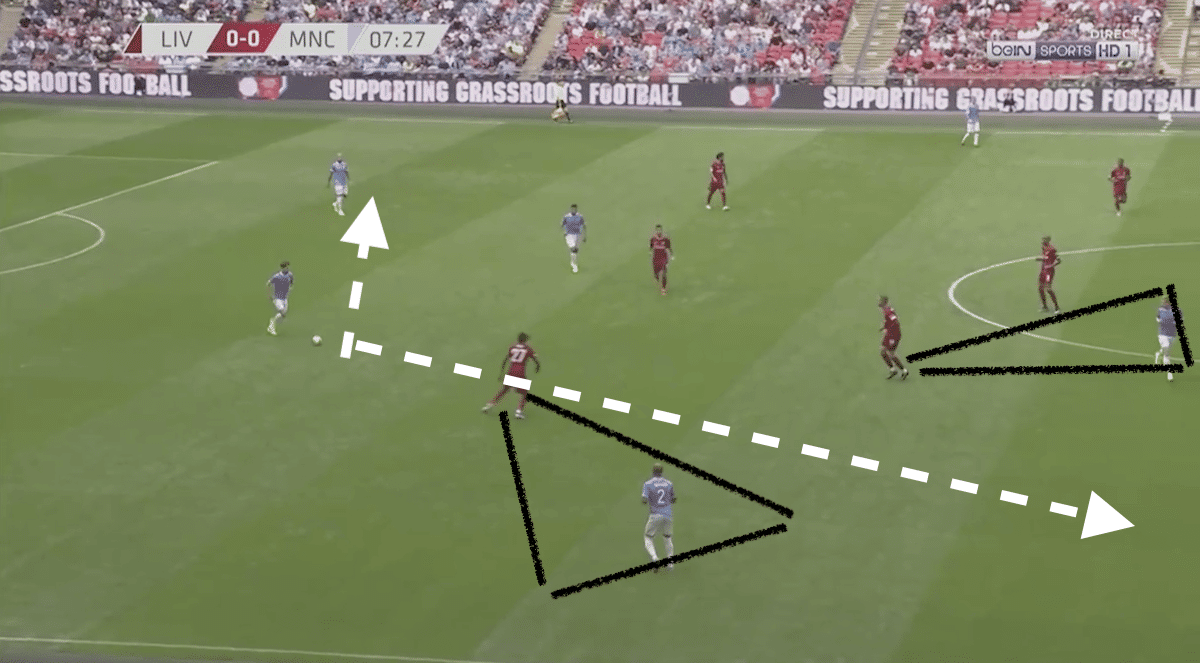 Just a few minutes after the Firmino chance, City again look to build out from the back. However, this time the press isn't as aggressive. Instead, the Reds position players intelligently in order to cut off passing lanes.

Divock Origi blocks off Kyle Walker while Jordan Henderson ensures John Stones can't play it to Kevin De Bruyne. Firmino is close to Rodri and Salah is on the prowl for int he ball is played to Nicolas Otamendi.

The positions that were taken up meant Stones was forced into playing it long. 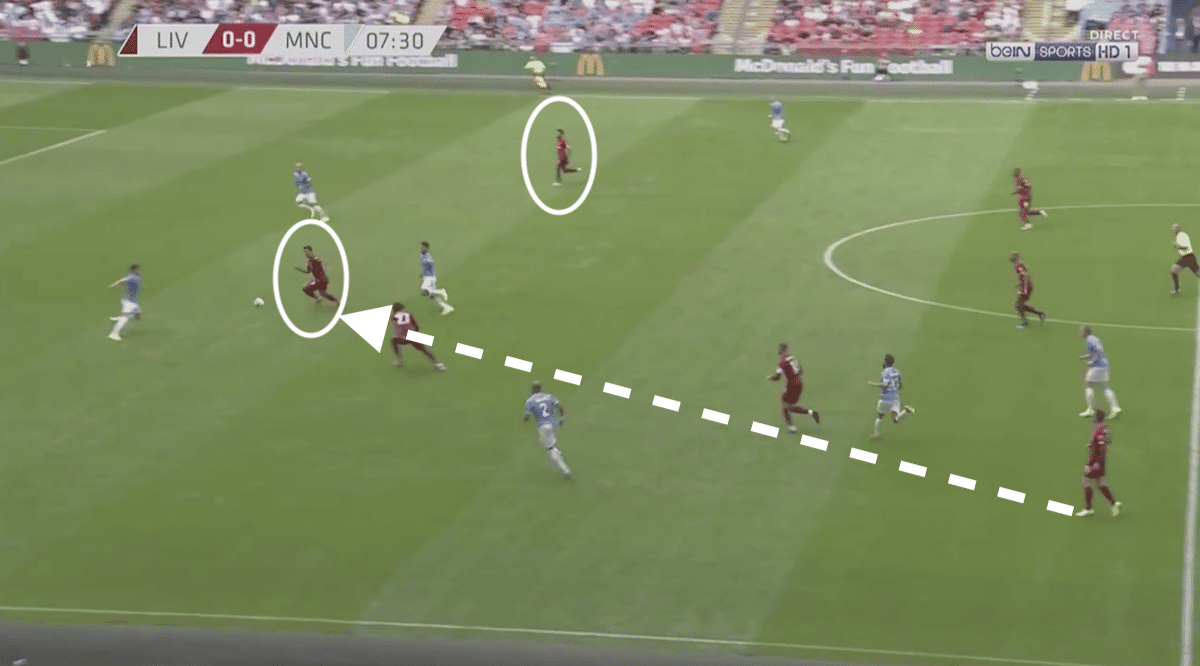 Andrew Robertson reads it well, gets in ahead of David Silva and gets the ball forward. City are caught in transition having committed bodies forward to support the Spanish playmaker. Walker is out of position, De Bruyne and Silva are both are one side of the pitch meaning the midfield is stretched and Liverpool have men over centrally.

The key part in this, however, is that Firmino and Salah are two vs two against the two City centre-backs. All it took was one pass for the Reds to spring into life and capitalise.

In the space of 90 minutes, all fears heading into the new season just evaporated. Liverpool went from looking sluggish, lacklustre and blunt to having 53 per cent possession and landing nine shots on target against a team tipped by many to retain the title for a third successive season.

The mood is now different and a lot more positive. And the Reds still have Sadio Mané to welcome back into the fold.